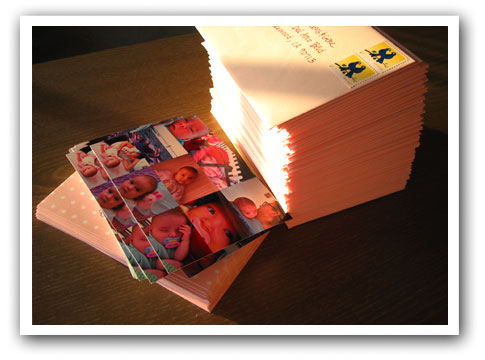 I had such good intentions, addressing all my pretty pink envelopes weeks before she was born. A lot of good it did me. Toby and I couldn’t agree on the design of the announcement for the longest time and finally I just went ahead and had them printed without his approval because it was just plain getting embarrassing.

Many of my friend’s had babies around the same time and all their birth announcements decorate my refrigerator mocking me. I should have just done one of those automated photo cards… it would have been so much easier. It’s just that I’m a graphic artist! I have a reputation to uphold. I can’t not design something. That’s what I do for a living. So I finally banged it out and now it’s in the mail. Done. Phew!

It’s silly that there’s this unwritten rule that birth announcements need to be timely. I mean, I understand they need to “announce” the event and waiting a year doesn’t really help a baby’s introduction into the world. But still, why do you get a whole year to send thank you notes after you get married? I had tons of free time after I got married. If I was an over achiever, I could have gotten all my thank you notes done on the plane ride to my honeymoon! Hah! Gone are those days. I don’t even know the meaning of free time now. I know it’s been said a zillion times but it really is true that when you are a mom, it’s a major accomplishment to get a shower every day.

I’m lucky. Baby Bug takes a nap every morning just long enough for me to take the quickest shower on earth. I’ve taken a shower every single day since she was born (I think, there may have been one day I skipped when I was out in Hemet where it’s okay to stink). I have to! Ever since she was born I’ve been the stickiest, smelliest, most disgustingist I’ve ever been. That morning shower keeps me sane. I look forward to it.

So anyway, the announcements are out. (Yay!) If you’re family or a close friend on my short mailing list, you can expect it in your mailbox in the next few days. If you don’t get one, email me because I have this dreaded feeling I left some people out. Please forgive me! I’m an addle brained mom now. Plus, I ran out of envelopes. But I’ll get some more, one of these days.