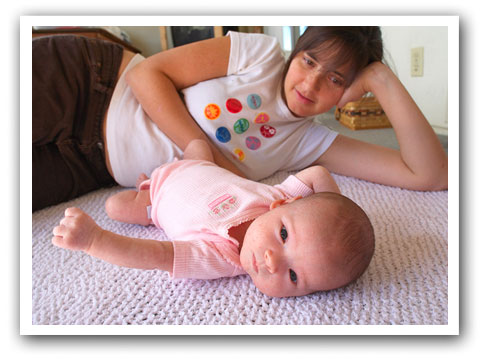 Look at that baby! Isn’t she huge? No, not me, the little one with the giant head and cute impish eyes. I think she weighs about ten pounds already. But I’m not sure. I don’t have a baby scale and I don’t really trust my math when I get on the scale holding her and subtract my weight. But she’s growing. In spite of her hatred of latching on, she seems to be consuming calories. I know that for a fact because a lot of them are coming out the other end in the form of disgusting orange poop.

Guess what happened the other day? I was moaning and complaining about Pamper’s poor design of their newborn diapers to my friend. I was telling her about how I hate the way the poop always shoots out the back of Baby Bug’s diapers and soils whatever she is wearing. Why even bother wearing diapers, I was thinking. Pamper’s should add elastic to the back to keep the poop in. I was even thinking about contacting Pampers and telling them this myself. There was some kind of survey/advertising pamplet that fell out of the bag yesterday going on about how they care about babies and want to do whatever they can to make their product better… bla bla bla.

Then my friend said to me, “Have you tried putting Baby Bug in the next size up?”

What! This is where I slapped my forehead and said, “Doh!”

I’m such an idiot. Babies grow fast. Duhr. Even I know that. So I tried on the next size up, which we happen to have from that time when Toby bought the wrong size (and I ranted about it because I was mad that all the stores discriminated against size challenged babies) and what do you know? They fit!

We still have some poop issues. But not nearly as bad as it was. But then what do you expect from a Ponnay? Toby seems to think all Ponnays are proud of their abundant and loud expressive poop. Every time he hears her farting/pooping from across the room, he says “that’s my girl” with a big proud smile.