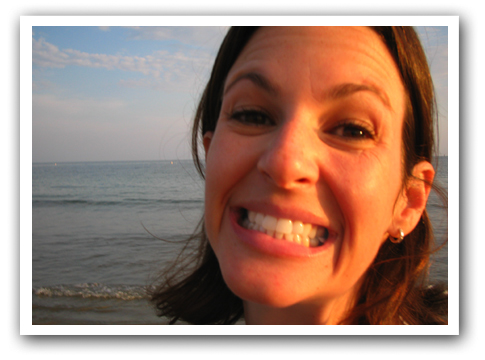 Guess who has a blog now? My new friend Sarah the Lurker. But now I have to call her “whoorl” because she’s a “whirly girl” or something like that. (Anybody remember that song from my bachelorette party cd?) Anyway, Sarah has a new blog and she’s really really funny and you should all go over there and give her some love because today she said she hates her blog.

Phew! I’ve been on birthday party duty these last two days and even though there is nothing I like better than cake, pretzels and goodie bags I’m a little worse for the wear.

The first birthday party was for a neighborhood friend of the Things. The Thing’s mother had to attend an event before the party was over so I got to watch the Things at the end birthday party, eat cake and pet a pot bellied pig. It was great. Baby sitting is so much easier when your charges are 100% occupied with the fifty other kids their age, eating sugar by the handfuls and a petting zoo. It really was a welcome relief for me since I sometimes get tired of making up the same old games over and over inside their house. All I had to do was chase them around with the supplied lasso (since it was a wild wild west theme party) and make sure Thing Two didn’t eat too many wood chips.

The next day I got to attend Thing Two’s Train Birthday party. Two party’s in one weekend! Hey! Hey! I’m like Uma Thurman eating cake in that horrible movie where she is a starved model and then they feed her cake. Except I’m not really a starved model. But I wasn’t there just to eat cake. I was on a secret agent mission to film the party. I’m not a professional videographer but I do get hired from time to time to make my wacky homemade movies.

This time I really really proved how unprofessional I am. I’m still sick about it.

I was half an acre away out in Train Country BFE!!!! I’m still so mad about this, I’m seething. (Or maybe I’m just hungry… it is 8am and I haven’t had breakfast yet as I type this.)

Here’s how it all went down:

The party was at Mackerel Flats and Goat Hill Junction Railroad which is a really cool park in Costa Mesa where you can ride real steam engine model trains. I had no idea it even existed. If I could find a link I would put it here but I can’t. So here are some quotes from their brochure:

“Situated on 45 acres of parkland, the railroad is one of the largest layouts of its kind in Southern California. 20,000 feet of track have been installed. In scale miles, that is over 30 miles of track, sidings, bridges and even a gift shop, making Mackerel Flats and Goat Hill Junction Railroad one of the largest public miniature tracks in the world.”

It was a Thomas the Train lover’s dream come true. Thing Two was in heaven. He skipped around in his conductor’s costume, blowing his train whistle and generally loving it. The best part was all the kids got to ride on the steam engine. The train pulled into the station and they all lined up to get on. Of course I was filming so I didn’t pay any attention to getting in line myself. Before I knew it every single seat was filled and I was left holding the camera. This would have been fine but the Things father specifically told me to make sure I got a seat near the caboose and filmed their ride while on the train. So I tried to squeeze in but the hobbyist conductor put his foot down and sternly said absolutely no photography allowed! Crumb! I wanted to tell the Thing’s Dad but he was in the thick of things with his birthday son riding at the front. There was no way I was going to hijack the party to complain about my bad luck.

Off they went into the desert of fields and hills that is Mackerel Flats leaving me behind in their steam engine dust. I decided to follow the track going the opposite direction so I could film their return and get some good angles of them coming back into the station. You’d think I could run along beside the train the whole way but this park was really really really big and it’s surprising how fast the little trains go. Plus when I run these days I feel like I have a water balloon attached to my front. It’s not a very comfortable feeling As it was I was already pretty hot and sweaty just from chasing the kids around before they even got on the train.

As I walked up the track, an old man who works there started talking to me. He was like your favorite grandfather with lots of stories and interesting train trivia. I started asking him questions about the track and if they ever make movies here. Before I knew it, I was getting a personal tour of the many many acres of Goat Hill Junction! We walked further and further out so he could show me the best angles to get realistic train photography. He convinced me that this was just the spot to be when the train came around again.

As I stood out there in the dusty dirt, watching the mustard weeds sway above my head in the afternoon breeze, I started to worry that maybe the train wasn’t coming by this “optimum angle for photography”. I didn’t hear any steam whistles blowing, in fact I heard nothing at all but the swallows dipping around to catch bugs and the wind in my hair. But Grandfather Goat Hill insisted they were coming any minute. So we waited and we waited. I strained my eyes to see across the park to see if maybe the train had pulled into the station and all the guests were getting out instead of taking another loop around the park. But even with my super duper eyesight, I couldn’t really tell. That’s how far away we were.

Then common sense hit me like a brick in the stomach and I realized my worst fears were coming true. Here I was out in the sticks while the whole birthday party was going down without me back at the station. Even though I don’t run much anymore, I took off across those weeds and sticks as fast as my little pregnant belly could go. The poor grandpa guide shouted out short-cut directions to me as I ran on ahead.

Sure enough, just as I’m huffing and puffing back into the station with sweat dripping down my forehead and my camera banging against my hip, the party is in full swing. The birthday song has already been sung, the candles have been blown out and the cake is a destruction site. The Thing’s parents lament that they waited for me but I was so far away they had no idea when I’d be back and they couldn’t make the whole party of salivating children and parents wait just for me. The show had to go on.

I was so sad about it. How did this happen? Why oh why did I let myself get lead astray like that? Thankfully, the Things are pretty laid back people and even though they will probably insist on paying me for the video even though I completely screwed it up, they are my friends and they don’t completely hate me for being well, stupid.

But then it got worse! How is that possible?

Filming the rest of the day was fine. I got plenty of footage of happy kids being happy kids. It was all coming together very nicely in spite of missing out on the most important part. I even had time to have a slice of cake myself before I headed home.

When I got home and hooked up my video camera to my computer and started to download the digital footage, I realized something was very very wrong. There was no sound. NO SOUND! I made a silent movie. Fantastic.

This is especially frustrating because I have a pretty cool new microphone that can capture 120 degrees of surround sound. A feature that would be especially appreciated as you watch a steam engine come into view and then pass by. It was going to be awesome. So what did I do wrong? What does every professional photographer do before they go on a big job?

Check the batteries! I had dutifully charged up my camera battery, like I always do, but I failed to check the double A battery in my microphone. I didn’t even remember I had a battery in the detachable microphone! Toby just shook his head. I am a disgrace as a photographer’s wife. Everybody knows you always check and double check your batteries before you go on a big job. I had a million and one excuses of course but it was still a very very very sad moment for me. I just wanted to bury my head in my hands and cry. What could I do?

I called Mrs. Thing and told her my bad news. I was heart broken and nearly in tears. I had to get it off my chest right away. Surprisingly, she wasn’t mad at all. Maybe because I’m baby sitting her kids all week while she’s out of town and her worst fears are more that I might not show up than that I completely bungled her son’s birthday video. She calmed me down and told me not to worry about it one bit. She said I’ll just have to make the best music video a birthday boy’s ever seen. Which I can totally do, good thing.