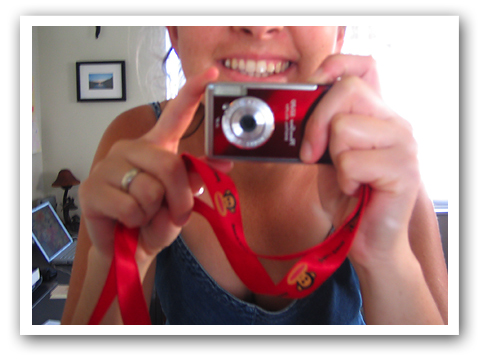 First off, my spy cam came back in the mail this week!!! I am jumping for joy to have it back. I missed it so much. I forget what day it came but it was before I left for Santa Monica. Which was perfect, because what’s a secret agent to do on an adventure without her trusty spy cam?

I’ve been meaning to talk about what went wrong with the SD20 because I know I’ve raved about it on this blog and a few people have even gone out and purchased it based on my review. So the following is important for those people.

While the Canon SD20 spy cam is the most excellent small camera ever, there is one small design flaw for people like me who use and abuse their camera on a daily basis (which you should be able to do!). IF you EVER happen to half hazardly have your finger or thumb even lightly over the lens when you turn it on and the lens can not open itself properly, IT WILL BREAK! The lens is so small that it doesn’t take much. I’m not sure what mechanism exactly breaks but what will happen is your lens will not be able to extend itself open all the way ever again and you will get an “E25 error” on your little lcd screen. I hope google finds this post because I hunted all over the internet for information on E25 errors and I found nothing. Of course Canon was very careful to remove any information from their forums on such an error and I was pretty much stuck sending it in and waiting for their recommendation.

Thankfully their recommendation was a full repair at no cost to me because this happened within a year of when I bought it!!! YAY for me! I’m so glad I saved my receipt. My mom, however, was not so lucky. Her SD20 broke a day or so after her year warranty was up. Same E25 error and yet there is nothing on the Canon website about it. Very fishy. She hasn’t sent her camera in yet so we don’t know how much the repair will really cost. (BTW for anybody who’s following the camera saga carefully, this is the first SD20 my mom bought. She bought another one to replace the old broken one before we went to Paris).

So that’s the scoop. I still love this camera and I don’t think there is any other camera out there that is really better than it for the price or the size. BUT if you buy one, be super careful when you are turning it on. I’ve personally adopted a sort of turning-on-ceremony where I make sure I am looking at the lens every time I turn it on. It can be really easy to make the mistake I did because sometimes I turn the camera on when it is in view mode and I’ll have it sitting in my lap or even setting lens side down on my desk or something. That’s all fine if it’s in view mode BUT if you’re in picture mode, it’s el busto of the lenso. You have been warned.

The next item of good news is: I GOT THE JOB! I nailed it. Well technically, I think I had it before I even walked in. I don’t think they are interviewing anybody else. I don’t know what I was so nervous about. It’s good to be on your toes though. It was a good excuse to go through my portfolio and weed out the ancient stuff.

The meeting was totally cool and I think I’ll fit in with my new coworkers just fine. It’s a really small company and all the designers get to work in the same room and share music from their ipod stations. This is super cool since Toby doesn’t think I need an ipod for some stupid reason. The computer I’ll be working on has a big fat crazy flat screen. It’s either a 23 or 30 incher. I’m not sure. It just looked very big. My poor laptop will be sad because I probably won’t love it as much after this job.

And now an item in pregnancy news, though not big enough to warrant the “Pregnancy Watch 2006” logo.

I went to Armstrong Nursery this afternoon to get a pot to plant my new tree in. I snagged my new tree from my neighbor’s dumpster. I don’t usually dumpster dive but it was sitting right beside the dumpster and I hate to see a living breathing thing go to the dump. Especially a nice big tree and it wasn’t even dead looking. So I rescued it. Of course it was root bound and needed replanting immediately. I think half the plants that get thrown away are just because people don’t understand that you can’t leave a plant in the pot it comes in from the nursery forever. Everybody thinks they have a black thumb but really they just don’t understand that plants are usually busting to be repotted the day you buy them. Of course a plant is going to get sad and limp and eventually die if you leave it in a too small pot. They’re kinda like goldfish. But I digress. This paragraph was supposed to be about the latest pregnancy news.

So…I’m shopping for a new pot at Armstrong and I’m disgusted that I can’t find anything for under $20. I finally find one that is made in Mexico and most likely not cured or whatever they do to it so it won’t disintegrate in a few years. I wedge and scrape the heavy pot off it’s shelf and heft it onto my thigh. It’s so heavy I can barely carry it. I know I’m not supposed to be lifting heavy things but I’m stubborn so I try to carry it anyway. Then some snotty teenager employee in a straw hat walks by me. I know he can see that I’m struggling with the heavy pot but he just lowers his head so he doesn’t have to make eye contact with me and struts on by. What a jerk! So I heft it step by step, like some kind of retarded giant, and eventually get to the check out counter. Thankfully, I don’t feel any pains or twinges. I feel more pains and twinges when I wake up in the morning and try to stretch, so I think I’m okay. But I’m still pissed. Why don’t employees offer to help? Maybe it’s because I’m not showing that much. Maybe when I’m sticking out to there, they’ll be falling all over themselves to help the poor pregnant lady. I guess we’ll see.

So that’s that. Today I didn’t get any special treatment for being pregnant. Hmph! I should boycott Armstrongs. Their pots are too expensive too. I could have bought the same “Made in Mexico” pot (that I paid $17.99 for at Armstrongs) in Laguna Beach for $3 but I didn’t feel like braving the tourist traffic. Shame on me. And yes, shame on me for not demanding some help with the heavy pot. Maybe I’ll get smarter from today on.