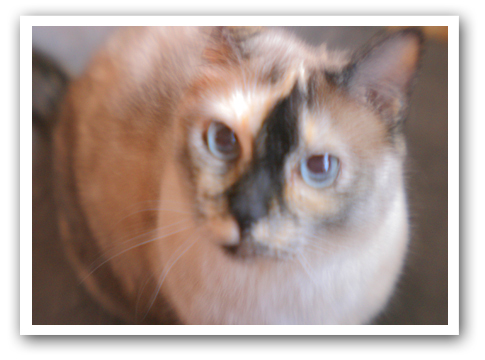 This is Maddy, the Spaz Cat. I’d take a better picture but my spy cam has been sent back to the Canon repair headquarters all the way in Illinois. I probably won’t receive it back for another 8 million years. That’s another thing I should blog about. The spy cam. But since I do not have a picture to post of the spy cam right now and obviously I can’t take one, I will first write about Maddy. Don’t you just love bloggers who blog about their cats?

Maddy is short for Madeline. But that was before we realized she was completely insane and most likely a schizophrenic cat. Now “Maddy” is just a cute way to say “mad”. Poor thing, she’s had a rough life. Somebody rescued her from a dumpster and kept her in a house with a bunch of other mean cats. If that didn’t traumatize her enough she then went to live with my alcoholic mother-in-law who went on drinking binges and forgot to feed her for weeks at a time. After one particularly hard binge, we adopted her. It was just too sad. We didn’t want what happened to her hamster to happen to poor Maddy. The hamster died of starvation.

When we adopted Maddy, Toby’s mom was so out of it we didn’t even know the cat’s name. So we named her ourselves. Later we found out her name was “Coco” but by then “Maddy” had already stuck. From time to time we call her “CocoMaddy” to give her old name some respect. But secretly, I sometimes call her that because to me she looks like she’s from the “loco laundromat” and somebody put her in the dryer and let her spin a few rounds. Her tortoise shell coloring looks like it’s been in a blender on high mode, casting her siamese coloring in all directions and leaving only a black splotch on her nose. I guess she would be a very valuable show cat if it wasn’t for that black splotch. In spite of her crossed eyes and crazy behavior, she is actually a beautiful cat. She has much better posture than my other cats who are just common tabby alley cats. She has beautiful paws that she puts close together when she stands. Her back is straight and she doesn’t have that stomach that hangs down and waddles back and forth when she walks like the other cats do.

But other than looking pretty, she’s just plain mad. I swear she’s taught the other cats to vomit on the carpet after I vacuum. They never did that before. Now it won’t be a minute after I switch off Sir-Sucks-Alot and I hear that horrible retching sound. Is it the vacuum that causes her to vomit or is it that she can’t stand a clean surface? She likes to vomit under our bed just out of reach, so it’s an incredible ass pain to clean up. She also likes to fight herself in the hallway leaving giant tufts of fur. Sometimes I catch her as she tumbles and growls at herself or her imaginary adversary. She sounds quite scary. Her ears are flattened back and she bites her tail. She rolls around and bumps herself on the wall. Sometimes she even jumps off the wall in some kind of crouching tiger ninja move. I should keep my movie camera handy and catch her next time.

So anyway, that’s the story of Maddy. (It’s a slow news day.) If we weren’t so attached to her craziness, I’d ask if anybody wants to adopt her. I could certainly use with a little less cat hair, cat vomit and crazy yowling sounds around here.