Phew! The first day is over. One day down, one day to go. I’m covered from head to toe in dust. I feel like an old woman. But that’s good because I need a good workout these days so I can be prepared for climbing steps all day when I’m in Paris. I hefted boxes, hung 1,367 dresses, skirts and blouses, threw out fifty million old moldy boxes and chased the dogs around the yard a few times. They kept escaping from their special side yard. They wanted to be in the middle of it all. 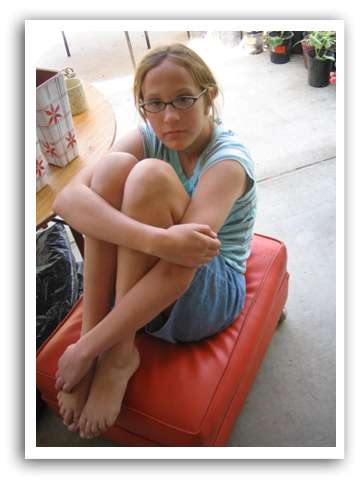 Just like my six-foot-tall, willowy cousin who is only twelve year’s old!!! She is so going to be a supermodel by the time she’s fifteen. It’s funny to watch her be all beautiful and gangly at the same time. She has no clue where her arms and legs are going. She’s like a colt who just learned how to walk. She looks like she’s sixteen, she has a body to die for and she has a brain of… well a twelve year old (of course). So she wants to play tag and hide and go seek with all the other kids her age. She wants to run and jump through things that she can’t fit through. She almost knocked over a table of glasses and breakable dishes three times. We had several mishaps while she was running in and out of our make-shift clothes lines (which are just poles stuck through the rungs of two ladders). She knocked over my mom’s stereo, by tripping over the cord and almost killed my dad’s Sirius satellite receiver. She was like a bull in a china shop. Good thing our China shop was only worth pennies.

The truth is, we are just selling trash. All the crap we have for sale is soooo worthless! It’s dusty, it’s dirty, it’s old and if it’s supposed to work it doesn’t work. One guy wanted to know if a little pink fan worked. (I used to have an all pink bedroom when I was 14.) So we plugged it in and as he tried to turn the knob to turn it on, the knob turned to dust in his hand. A plastic electric fan turned to dust! What kind of conditions make an electrical fan turn to dust? My mom has been keeping every single thing since the beginning of time. I’m so glad I’m a purger instead of a pack ratter.

I even unpacked boxes of dirty underwear today. Dirty, holey old underwear! Who would ever buy dirty old underwear? I was so embarrassed in so many ways. After I finally went through every box of clothing and threw out everything that was stained, ripped or moldy I felt a lot better. It’s just horrible to know people are sorting through your stuff and they’re going to have to lift a pair of crusty jocky shorts to find some other treasure underneath.

Even with all the trash, we did manage to make $200. We would have made more but we started just giving things away. It took so much work to get everything out and cleaned that the thought of putting it all away again or loading up the truck 500 times to take it all to the dump gives me hives. I think by end of day tomorrow I’m going to pay people to take our junk.