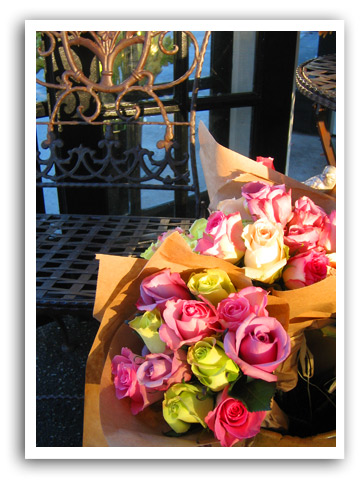 Today was one of those days. A day where eleven things go wrong and then when the twelfth bad thing hits, you stop and think: Is it me? Am I the only common denominator here?

But first before I launch into all those bad things I need to note that a lot of good things happened too. Firstly, Pretentious has successfully switched me over to Moveable Type. Woo Hoo! I’m completely confused and dazzled by all the new choices. I think things are going to be a little “under construction” for a while but I am beside myself happy about all my new options. Secondly, I got my hair cut. Yay! Yay! There is no better cure for the gloomy winter blues than a fresh new hair cut. Pictures tomorrow… maybe. If it washes okay.

I think the lesson I needed to learn today was to just chill.

I spent the night at my mom’s last night because yesterday we moved all my plants to her house. I should clarify that. We didn’t move all of my plants. Toby talked me into keeping a few. The healthy ones. I admit I had a pretty wacky collection of sick plants that I was bringing back to health in my “plant hospital”. I take back some of my venom from yesterday. I could be guilty of trying to nurse some pretty ugly plants. So maybe my busy body landlady has a few reasons to be meddling. I don’t take back everything but I’m trying to move on with more compassion.

I think what really brought me around to this new point of view was my mom’s face when she had to tell me that her dog chewed up my favorite sweater. I could see real fear in her eyes. She was afraid of how I might react. She knows I was pretty upset already about my crazy landlady. I think she was afraid the sweater shredding news was going to send me over the edge. And maybe it would have… But there is nothing like a reality check when a loved one shows fear in their eyes because they are afraid you are going to completely lose it if one more thing goes wrong.

I don’t want to be like that. I love my sweater. Sure, it hurts me to have to cross it off my illustrated list of clothing items I am going to pack for my trip to Paris. It makes me mad that I took so much care to keep it clean and dry cleaned and now it’s shredded. BUT it’s a material thing! How am I ever going to grow old gracefully if I have a coronary over losing this sweater?

Besides it’s completely my fault. We were planting my plants in my mom’s yard late last night. It was dark. I took my sweater off because I didn’t want to get it dirty. But then I completely forgot about it and left it out all night on a garden chair. I know better. I was absent minded. Of course my mom’s overly rambunctious lab puppy was going to chew it to pieces. She’s a puppy! She shreds everything. You should see the “dog couch” that they sleep on. Every morning my mom comes out to a yard covered in “snow” which is actually the stuffing that has been pulled out of the dog couch’s cushions. Even though I want to, I can’t get mad at the dog.

So after photographing the carnage for posterity and a proper sweater burial in my mom’s kitchen trash can, I have vowed to move on and take things a little easier.