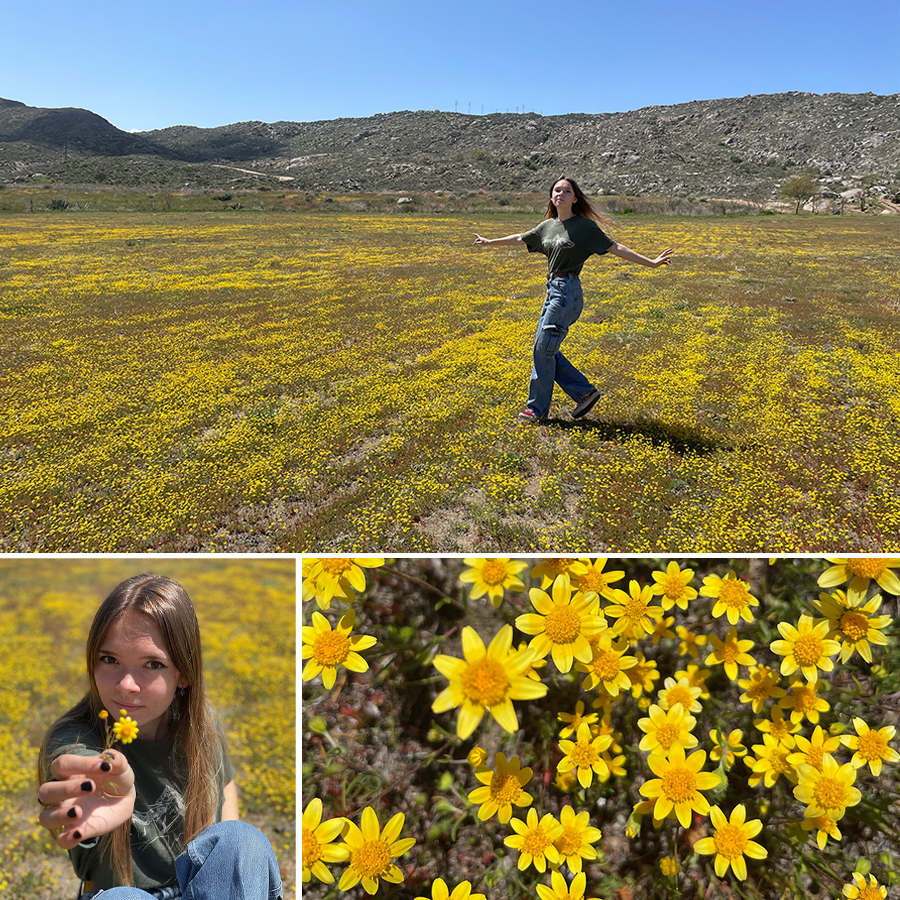 It’s Spring Break here in Southern California and the first thing that brings to my mind is: Oh no! We need to go somewhere on a trip that is NOT crowded. Ack! That’s always a challenge in the new instagram culture where people flock to pretty places in droves so thick it makes national parks not fun anymore. So off the beaten path we go! 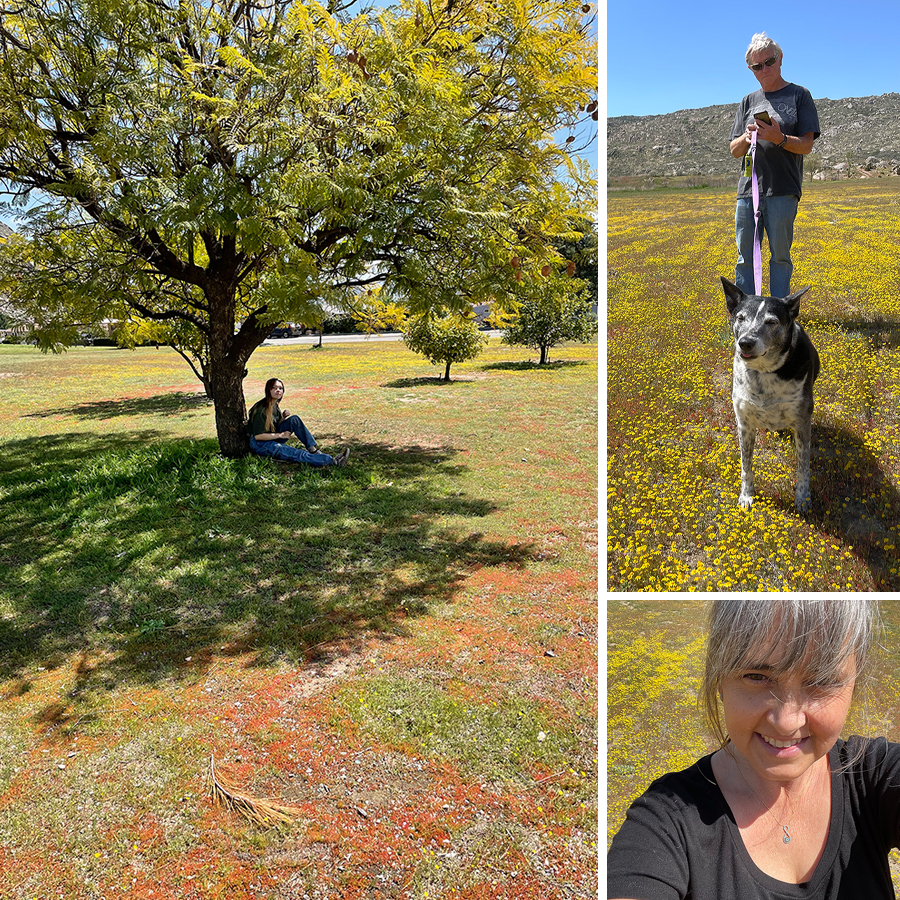 That path took Bug and I to no other place than my parents little oasis in the sticks! Hemet is NOT a tourist destination unless maybe you are documenting the dollar stores of America or really into Walmart culture. but it does have the advantage of not being crowded and if you look hard enough there is beauty everywhere!

The desert is wild with flowers these days. The first bloom of little yellow goldfields has popped up and covers the ground around my parent’s community like a fuzzy carpet. Bug and I had so much fun dancing around in the flowers and taking photos. 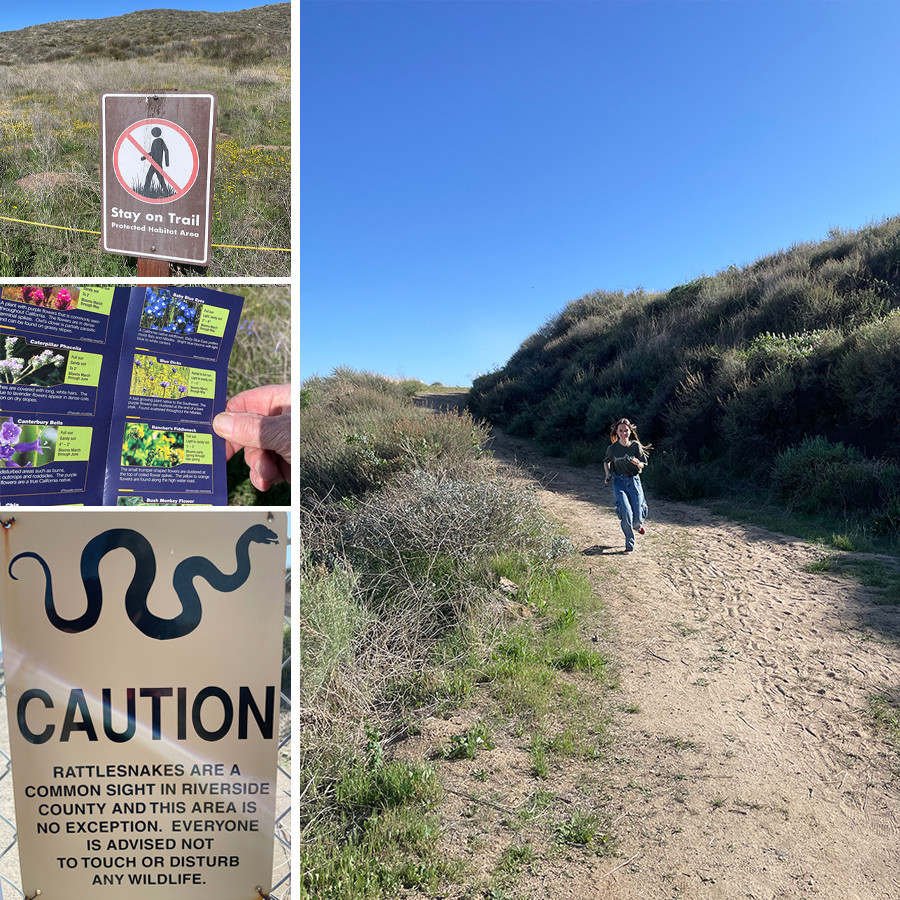 My dad said, If you guys like this, then let me take you to Diamond Valley Lake and show you more wildflowers to which we said, Yes, Please! 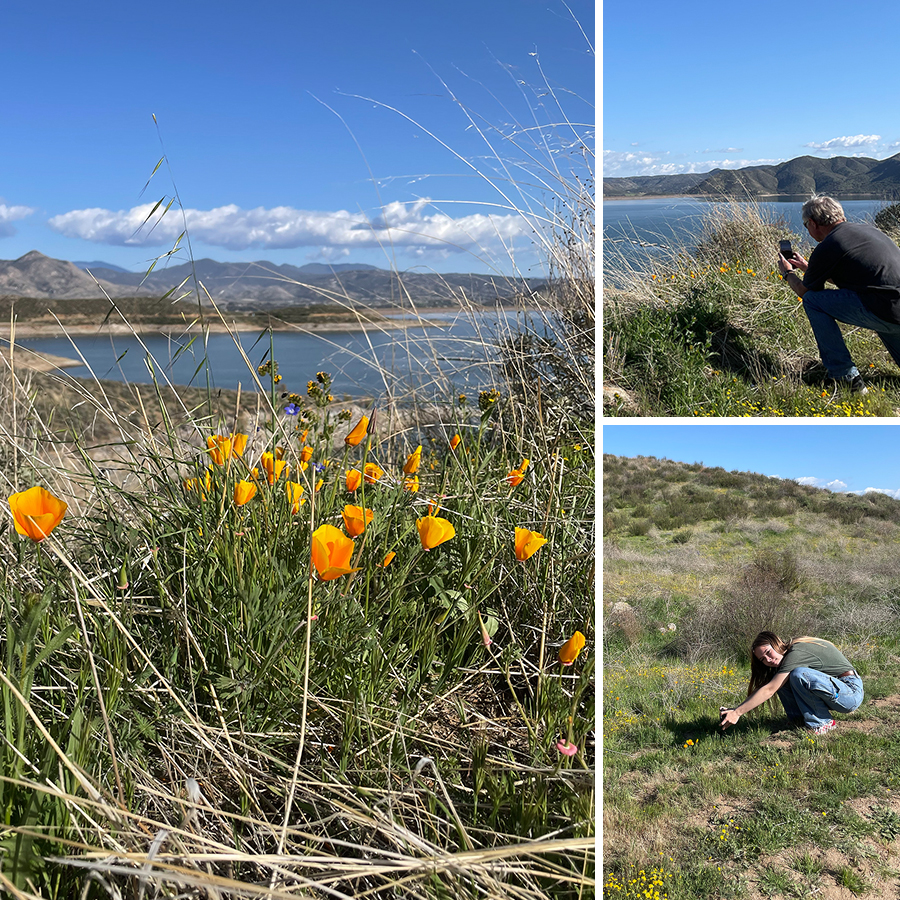 I had never actually been to the manmade Diamond Valley Lake, but fun fact: I used to work on an egg ranch as a receptionist at the bottom of that lake before it was a lake! Yes, it used to be a huge valley, dotted with farms and grasslands and now it is full of drinking water that belongs to San Diego.

It quite scandalous how that happened actually and Hemetites are not all happy about it. When they first proposed this lake it was going to be a tourist destination for water skiing and fishing BUT that didn’t work out because human contact makes drinking water undrinkable. So the Hemetites voted it in thinking they were going to benefit from a booming travel destination only to find out you couldn’t swim in it and nobody was going to come visit a lake they can only take a boat to. I take that back, boating is fun BUT Hemet is HOT and floating around in a boat all day, on a lake you can’t swim in to cool off, is not that fun. 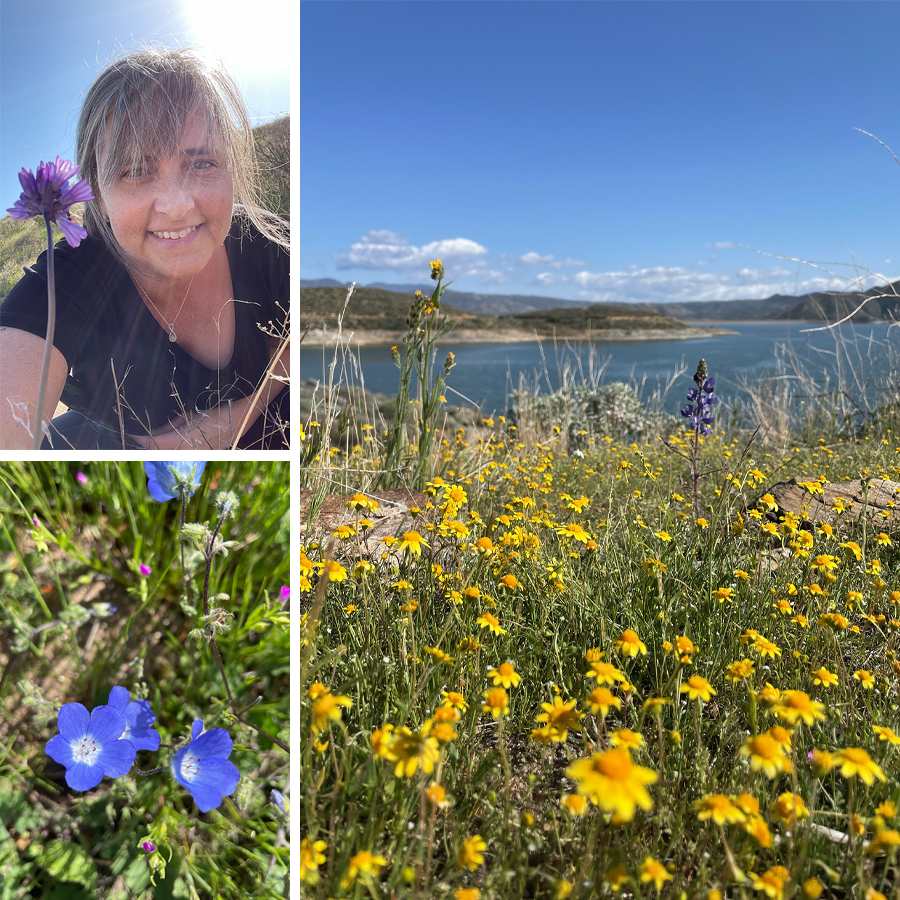 So it’s pretty much vacant most of the time. Not that I’m an expert on that. Maybe it’s swarming with people in the summer. I wouldn’t know. I just know that on a beautiful spring day it was deserted. Wonderfully deserted and perfect for taking a two mile hike on their designated “wild flower trail.” 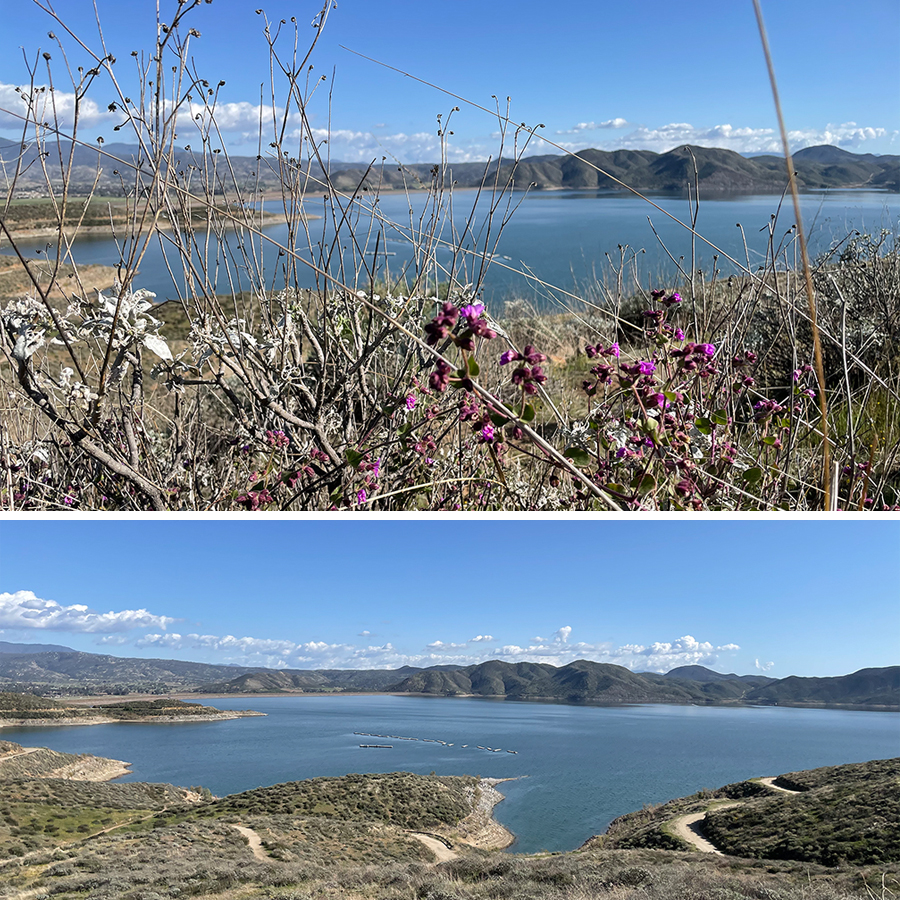 Not a bad hike! My dad and Bug and I thoroughly enjoyed our little jaunt. 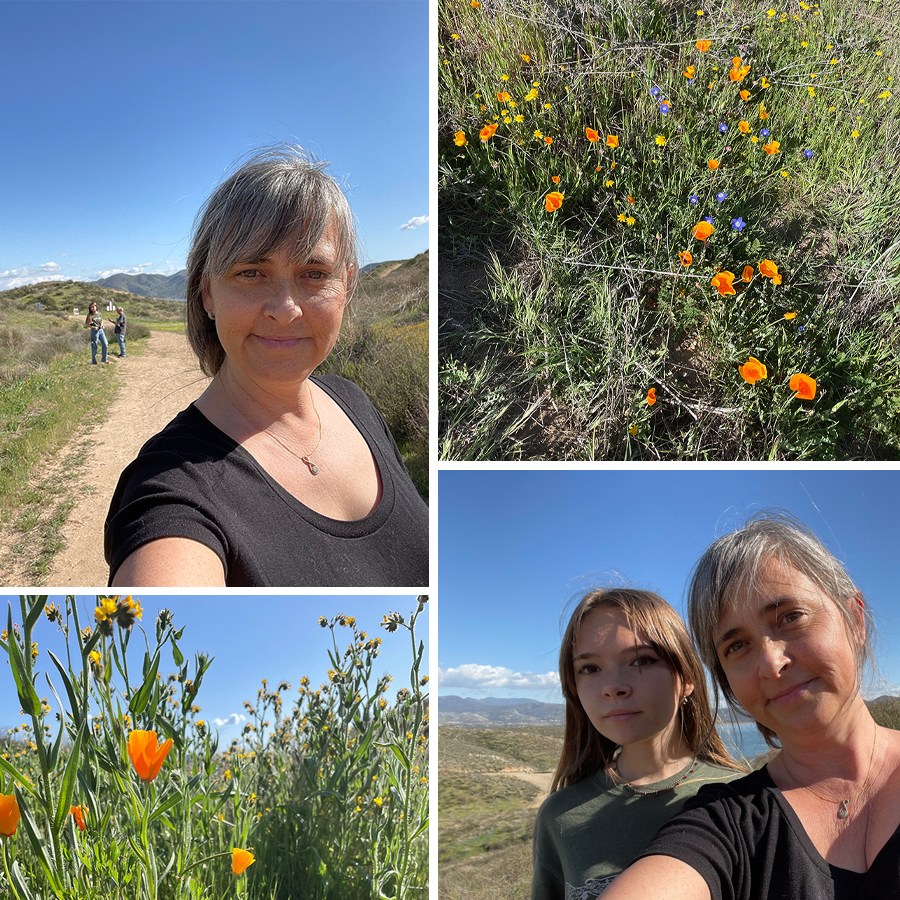 We took photos galore, looked up all the wildflowers in the little brochure they gave us and generally enjoyed the kick-off to our Spring Break. 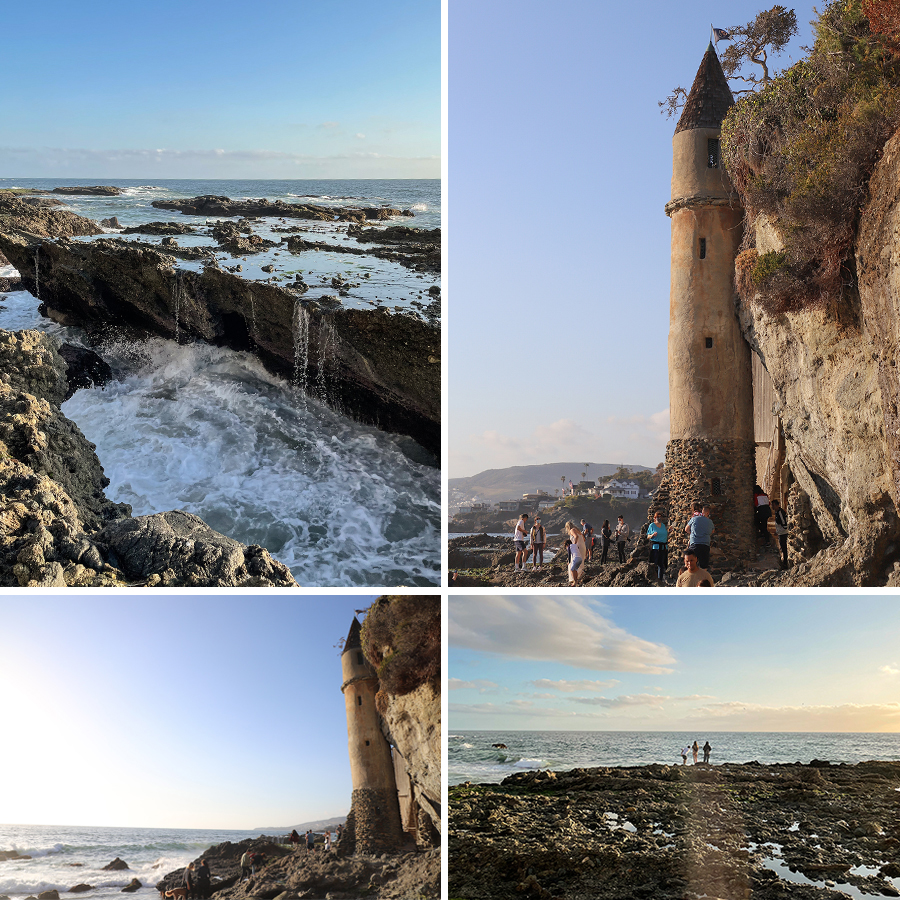 Last week, when I was researching beaches for my photoshoot, I came across a this article listing the top beaches in Laguna Beach. I’d been to many of them but I couldn’t say I know much about them other than random visits back in the 90’s when I was a bikini-babe following Toby around.

I decided it should be my duty to get to know all the local beaches. I mean, I live here, right??! It’s a crime to live here and not be an expert. What if someone came to visit and I didn’t know which street to take to get to this or that beach? What if there was a perfect place to watch the sunset or some little known cave or secret passageway that I could show others as the tour guide to their adventure?! I love adventure. And there is no time like a pandemic to do some outdoor research fun. In fact, it’s pretty much the only thing we can do for fun. 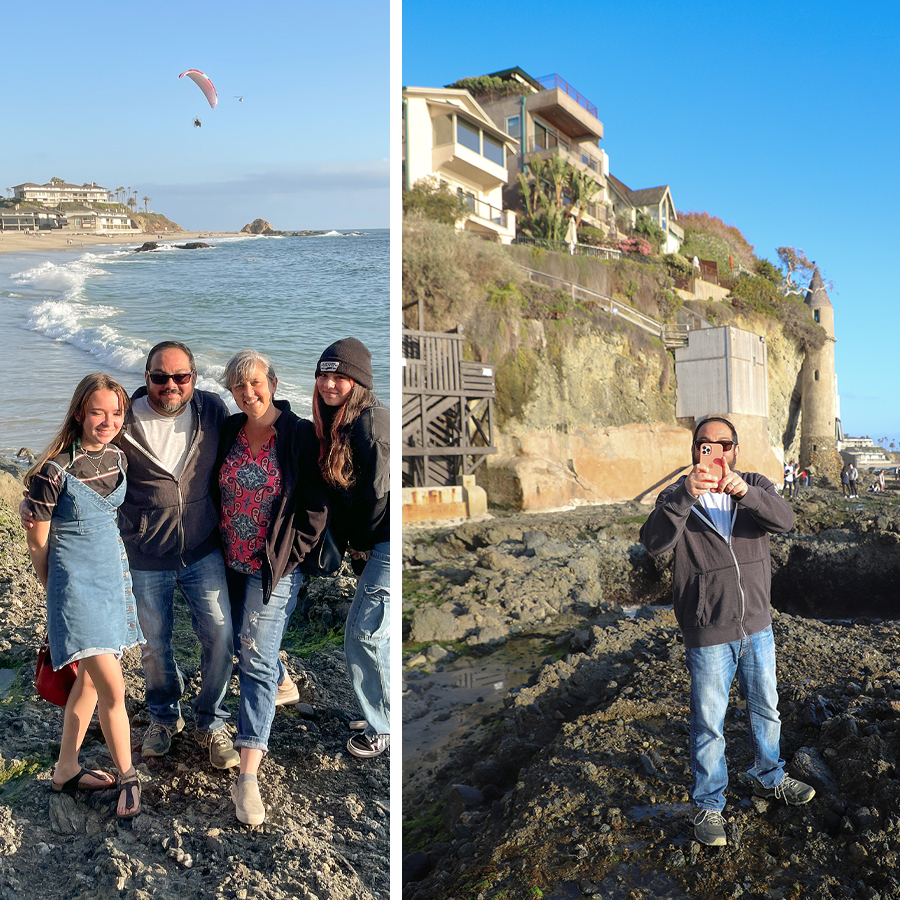 I wrote down all the beaches on our family wipe-board and informed the family that this was our new bucket list. One by one we’ll knock them off our list and become beach experts. That’s the plan! We’ll see how it goes. 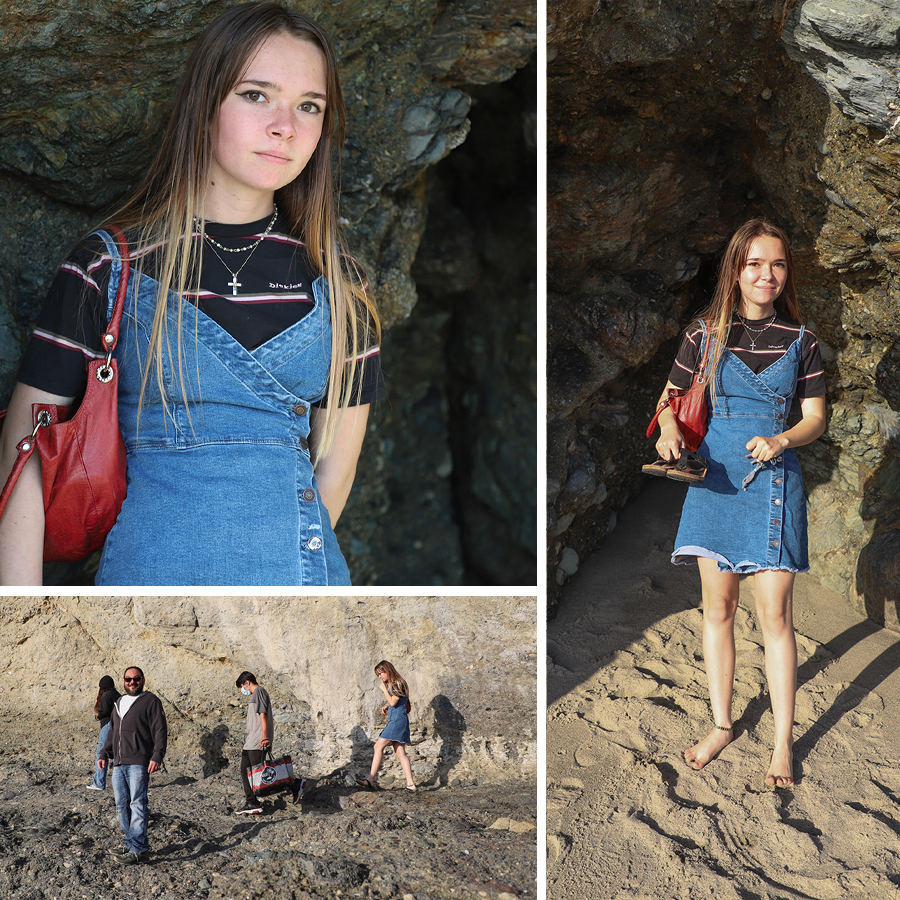 The first beach we decided to visit was Victoria Beach. I love this beach. I’ve been to it ages ago and waded in the little cement pool that sits at the base of a pirate tower. Bug even found some old pictures of me: 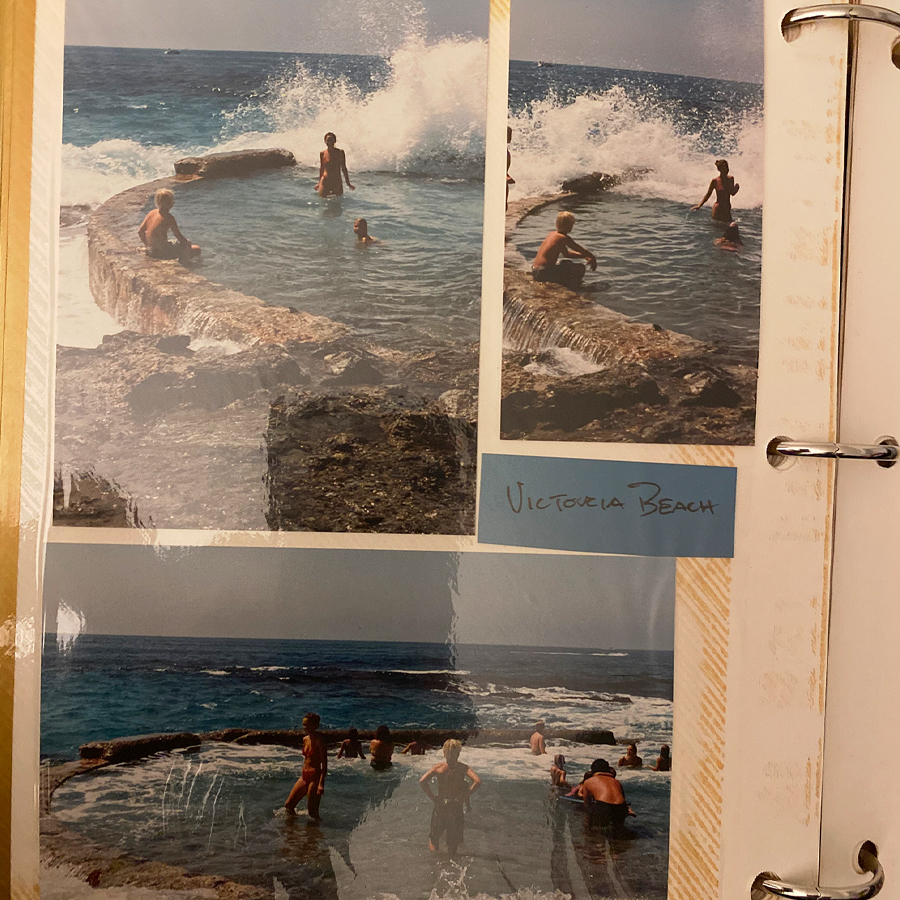 Look at me being all Skinny Minnie back then. Can you believe I hated my body back then too? What a complete waste of time.

When we visited this last weekend, the concrete pool was still there but it wasn’t holding water. Maybe it still does when the tide is high. I’ll have to check back and see. When we were there the tide was out but sloshing in and around the many tide pools in the rock outcroppings. 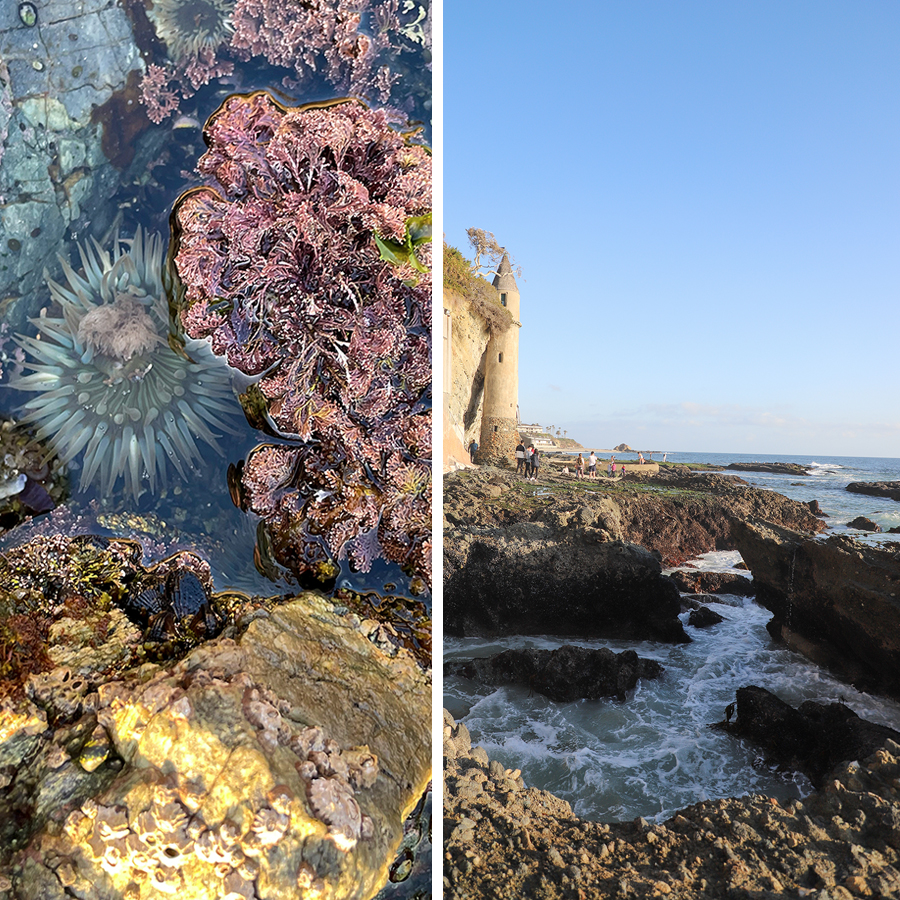 The water rushesd in and out between little rocky crags. Payam is a true risk taker and took a few leaps from rock to rock while the rest of us decided to avoid danger in favor of a longer but more safe route around these crags. Payam must have been a billy goat in a former life. 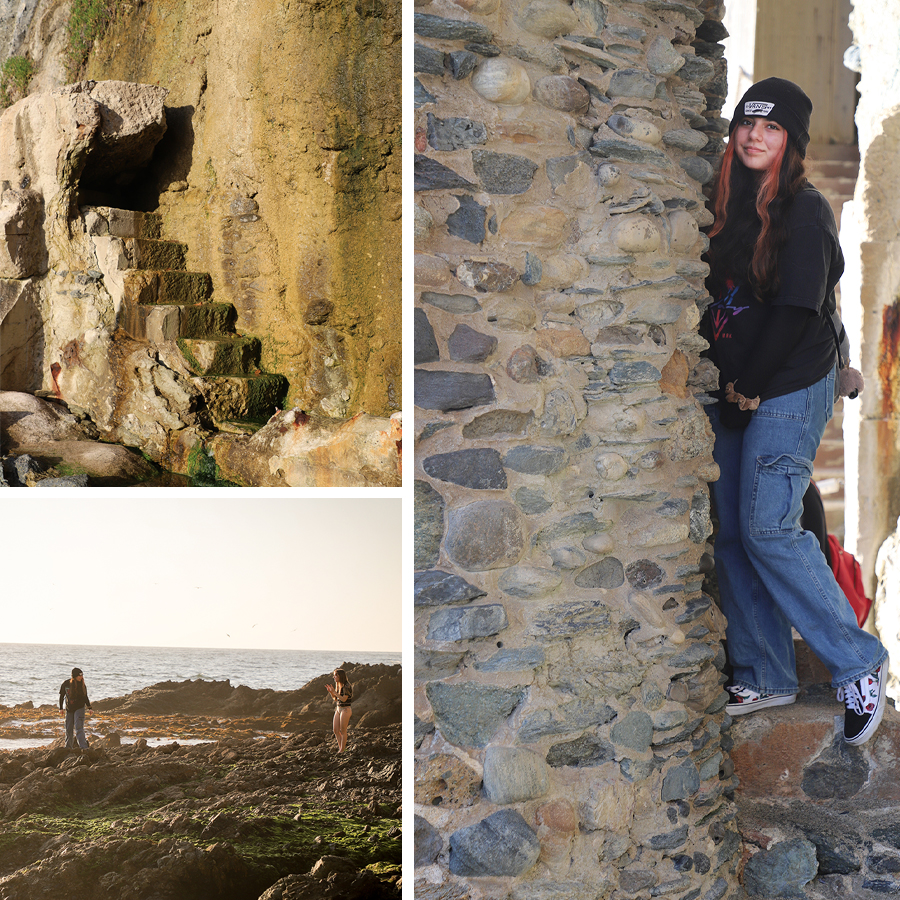 I was so happy to read about the history of the tower that Victoria Beach is known for. I’ve wondered about it forever. It turns out it’s just a spiral staircase that some wealthy person built from their private property estate at the top of the cliff down to the water. It’s not an actual bootlegger passageway, pirate tower or private room for Rapunzel… It’s also locked because it can get filled with water when the tide is high and become dangerous. We rattled the lock and admired the old-timey decoration on the iron gate.  It’s pretty cool to explore around it though and imagine the fun they used to have hiding pirate booty for kids… I’m sure it’s shown up in many whimsical and majestic photoshoots.

What fascinated me the most about Victoria Beach this time was the rocky ledges and the cascading dripping waterfalls. 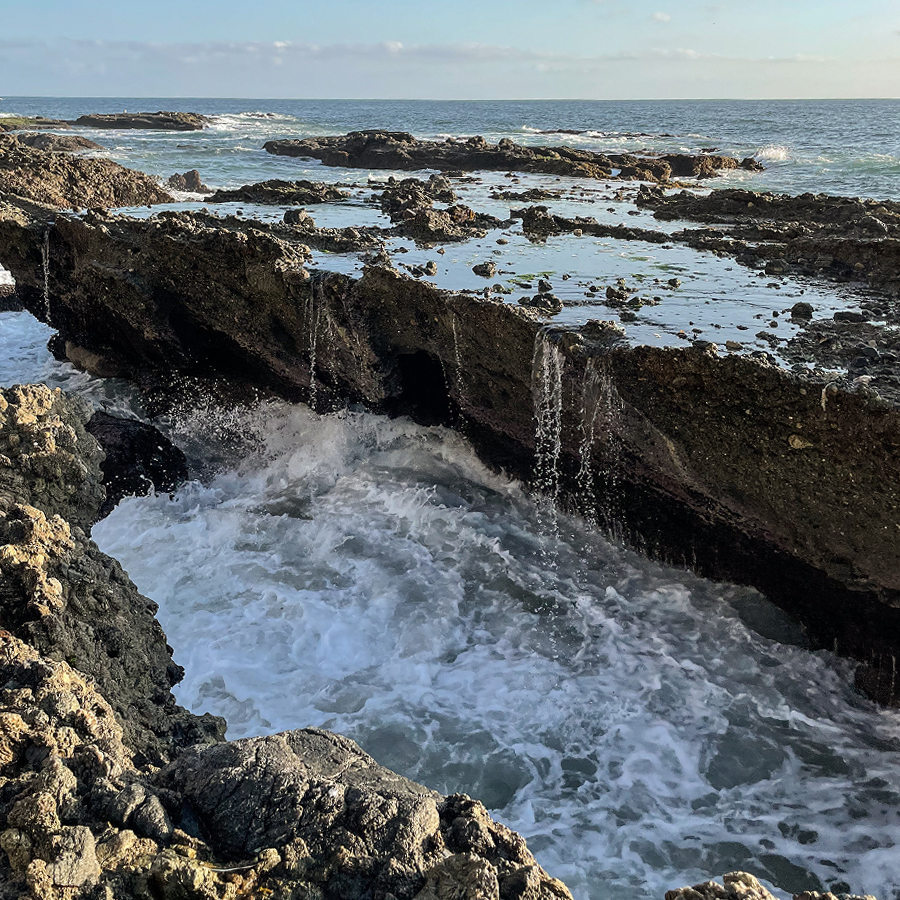 It was like Niagara Falls in miniature. Or maybe some other famous waterfall that I don’t know the name of. Anyway, I spent a lot of time trying to photograph these drippy waterfalls. 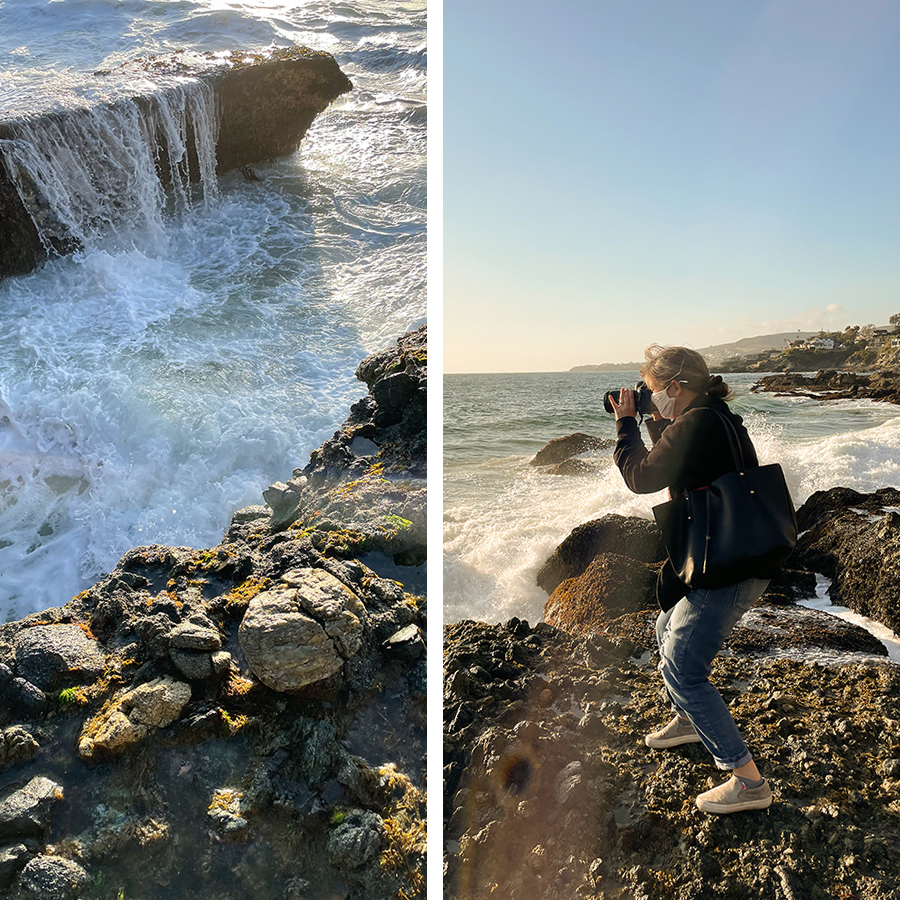 Photographing a bright sky and dark rocks with shadows is tricky. It’s like you have to choose to make the sky look great or the murky shadowy parts great and blow out the sky. You can never really get both at the same time. Though I tried. Later with photoshop I cranked up the shadows and down on the highlights to get most of these shots. Right out of my camera they were mostly silhouettes. 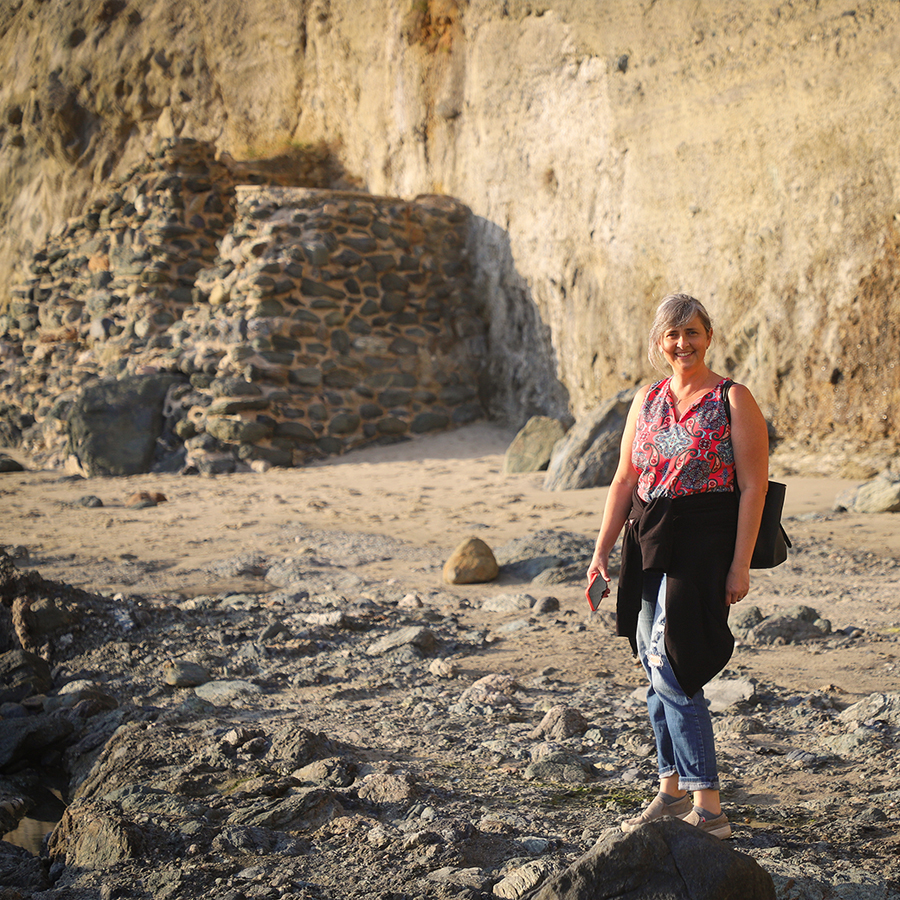 My supreme goal in this beach research project is basically to hunt for the perfect golden hour/sunset shot. It’s kind of like bird-watching or shopping at thrift stores looking for that perfect leather jacket that Brad Pitt in Fight Club. I’m basically a hoarder/collector/hunter-gatherer but instead of hunting for stuff, I hunt for photos. This is a win in my book because I don’t have space for stuff! But photos on the other hand can be collected forever. In face I have so many that I share them here and forget about them! Anyway, I digress.

The thing about beaches at sunset is you never know what you are going to get. Some days seem like they will have the most glorious sunsets ever and the sun sets in an ordinary yellow-white boring sky with very little fanfare. While other days can be dreary and turn into the most amazing jaw-dropping displays of oranges, pinks and purples that seem so bright you can’t even believe they are real. You just have to wait and see what you get. I suppose some weather forecasters and photographers have figured out the geometry and necessary cloud placement for a good golden hour sunset but it’s beyond me. To me it’s just a fun gamble. 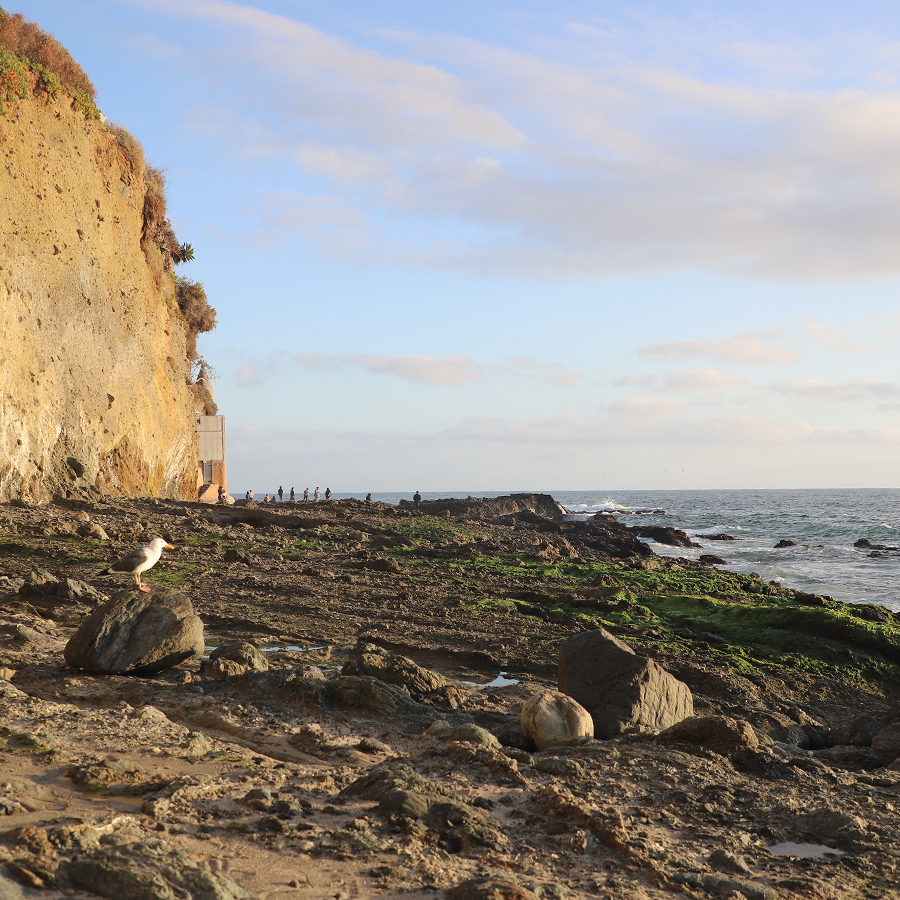 While Payam and I settled in for a nice wait for the sun to do it’s thing as it lowered, the kids scrambled around on the rocks, played in the water and explored. 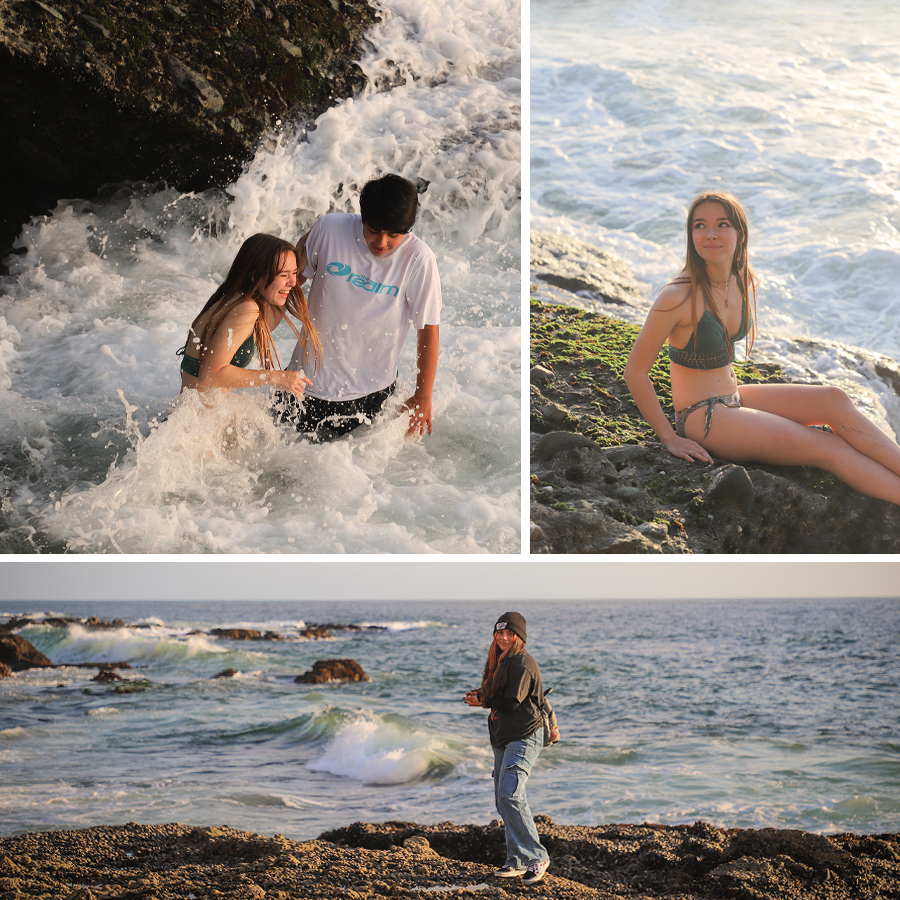 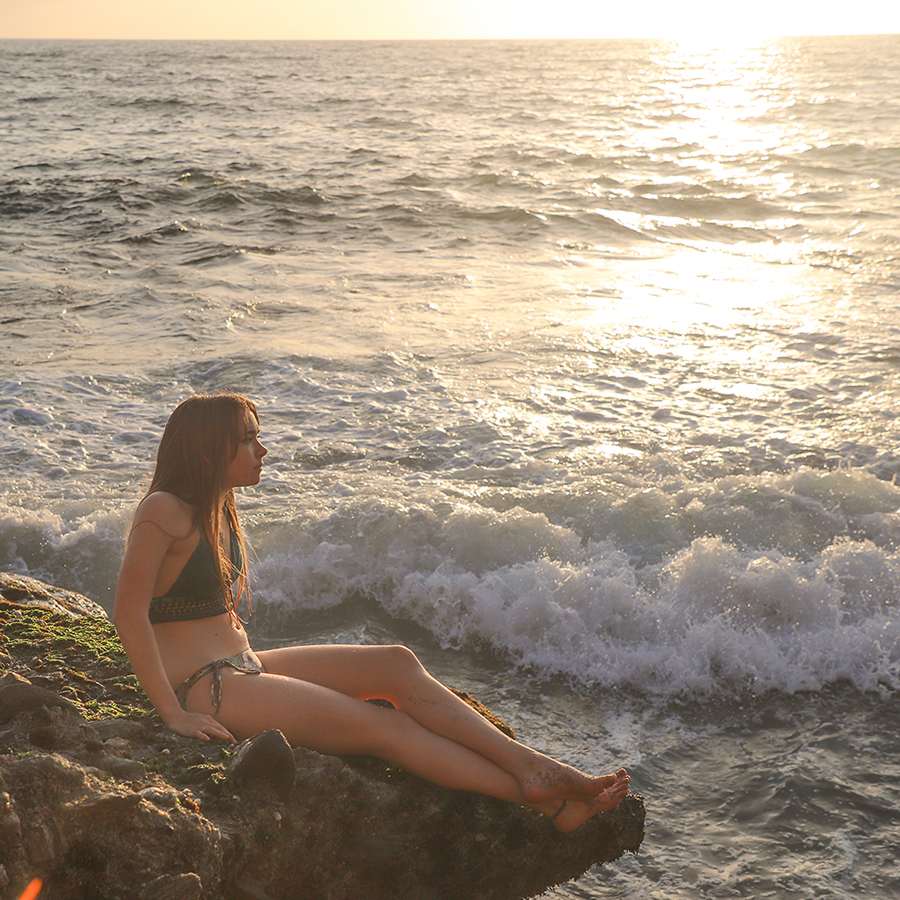 Some of us thought that sixty degrees was plenty warm enough to wear a bathing suit.  Fashion before comfort, and all that. I can’t really bag on Bug and her swimwear too much though because after you got used to the chill of the water, it was actually quite warm and invigorating. My blood is thin though and I like to stay clothed. 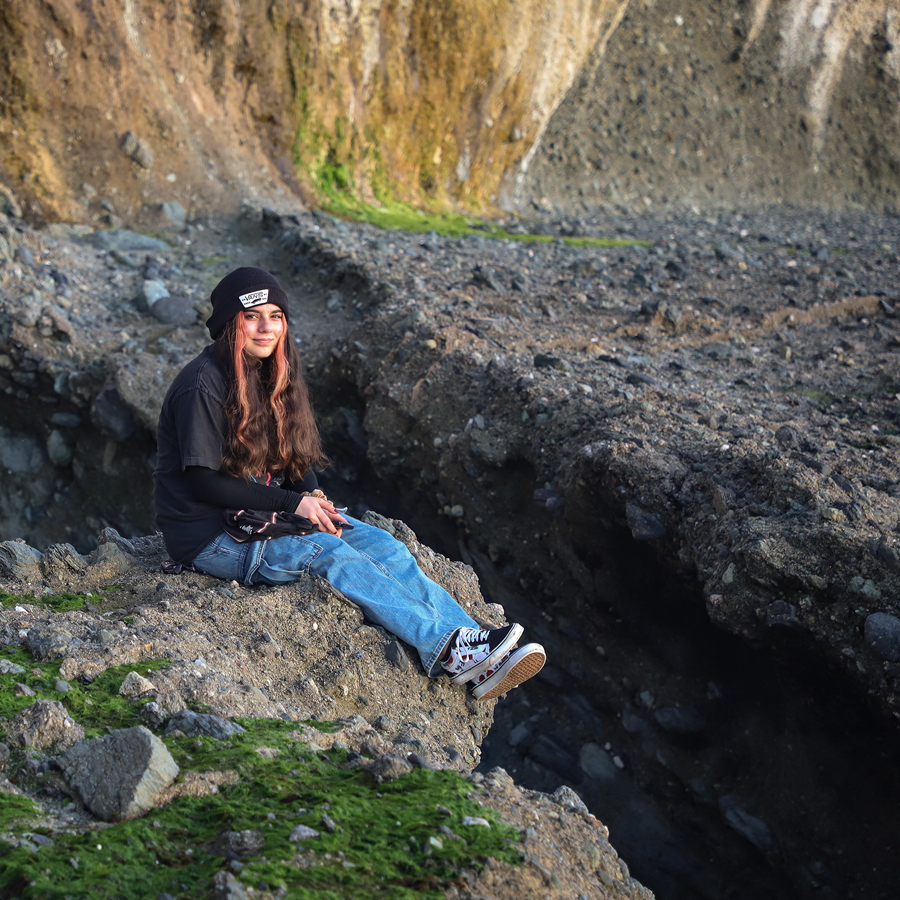 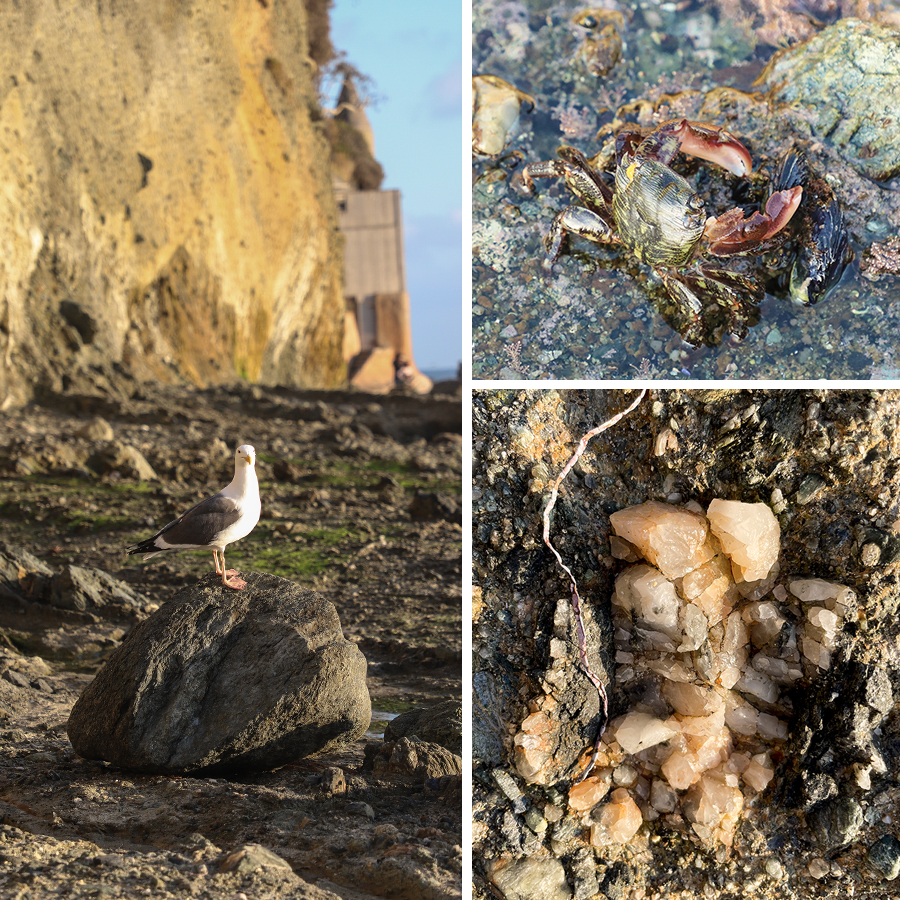 The sun came and went and golden hour was captured. It wasn’t anything crazy but it was still beautiful and hit all my golden hour necessities. 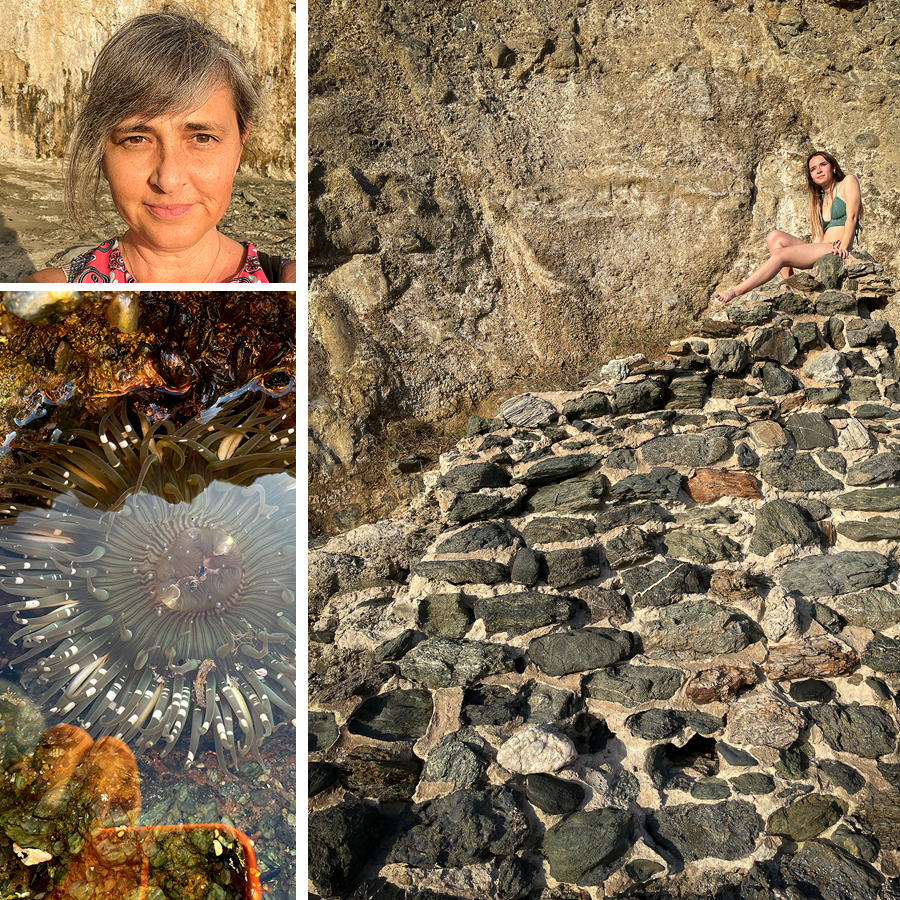 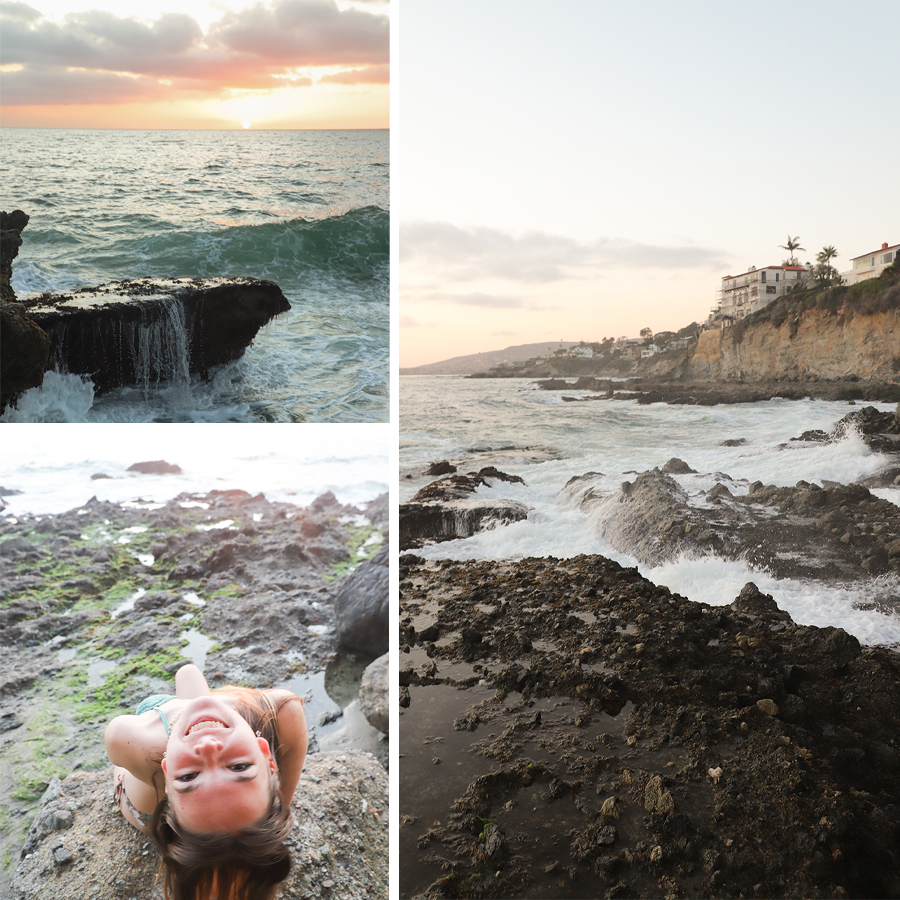 We came, we saw, we took photos of the sunset. 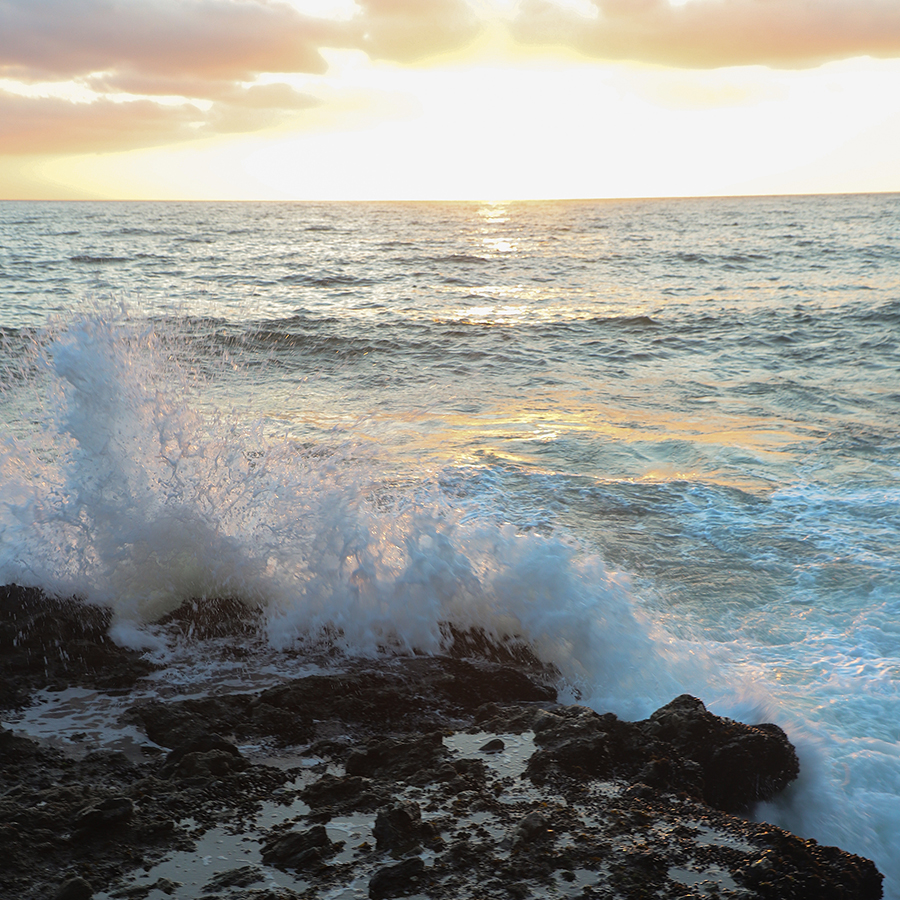 It was yellow and white with a few dramatic effects when the sun went behind some clouds and turned the frothy waves into golden pools. 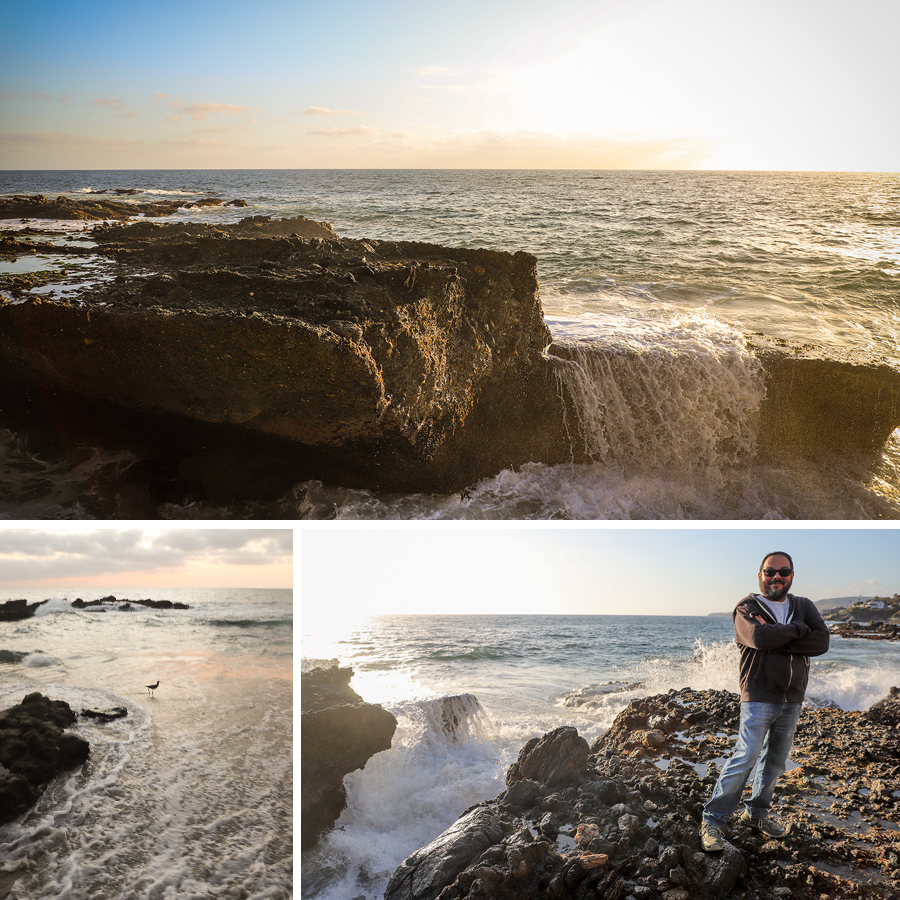 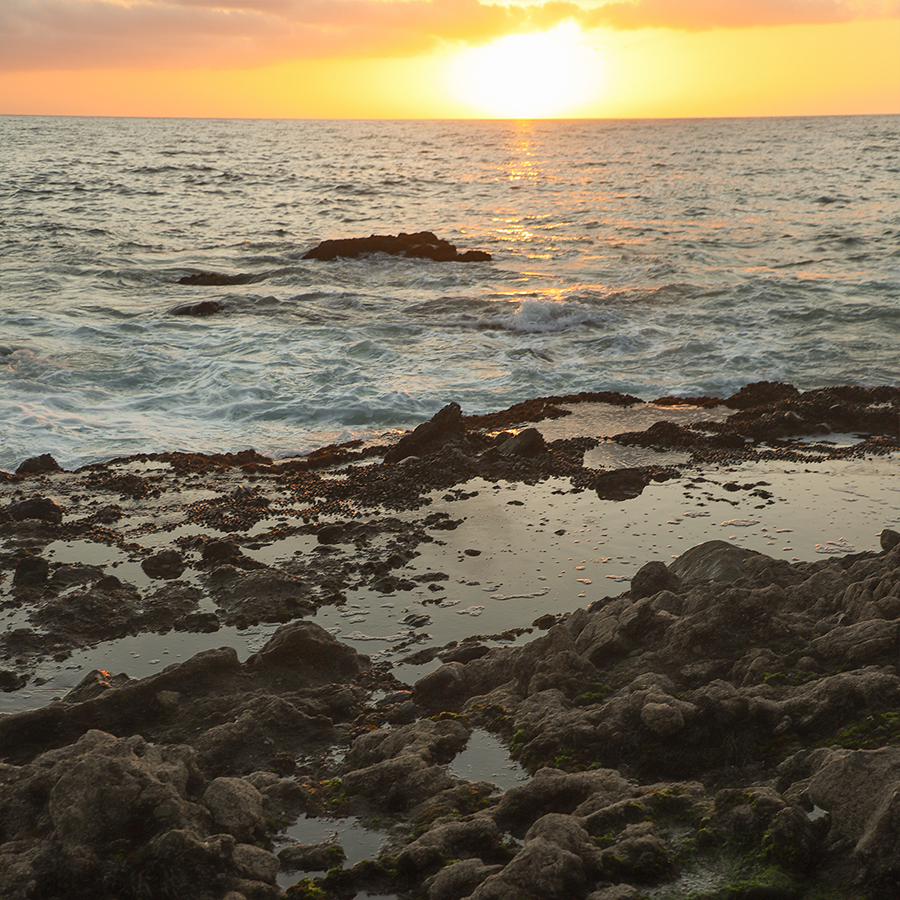 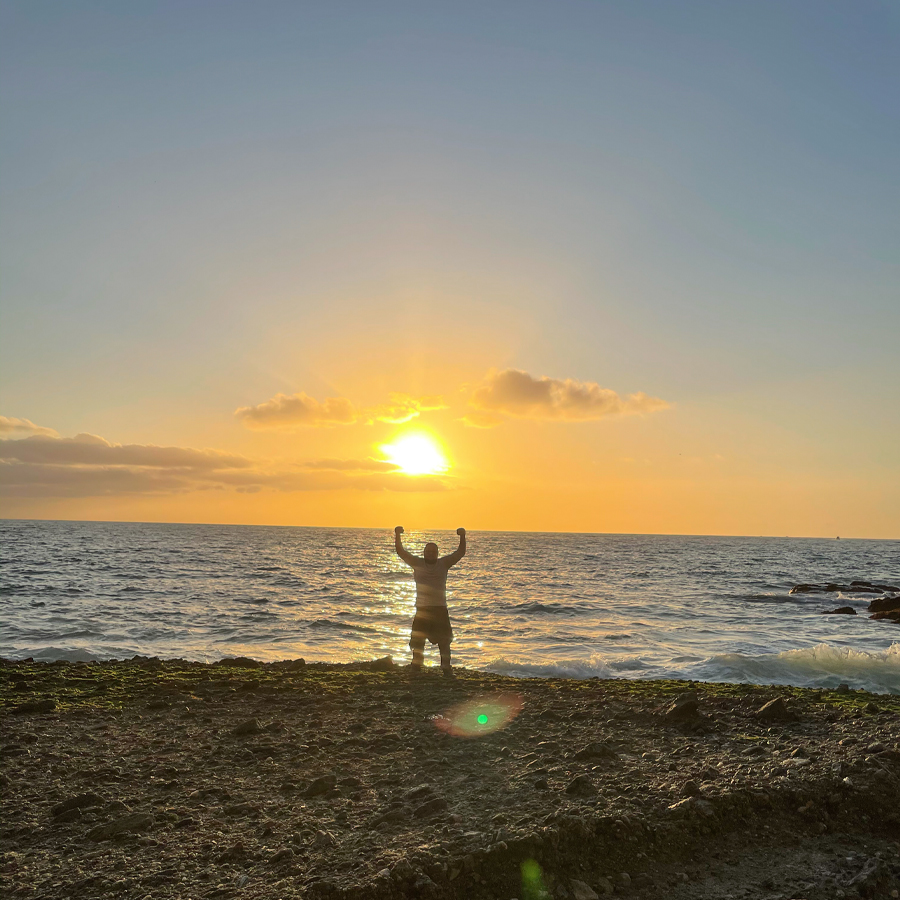 Until next time! I wonder what beach will be next.