posted in I have the best boyfriend, my Persian emersion, the dogs on June 7, 2018 by SAJ 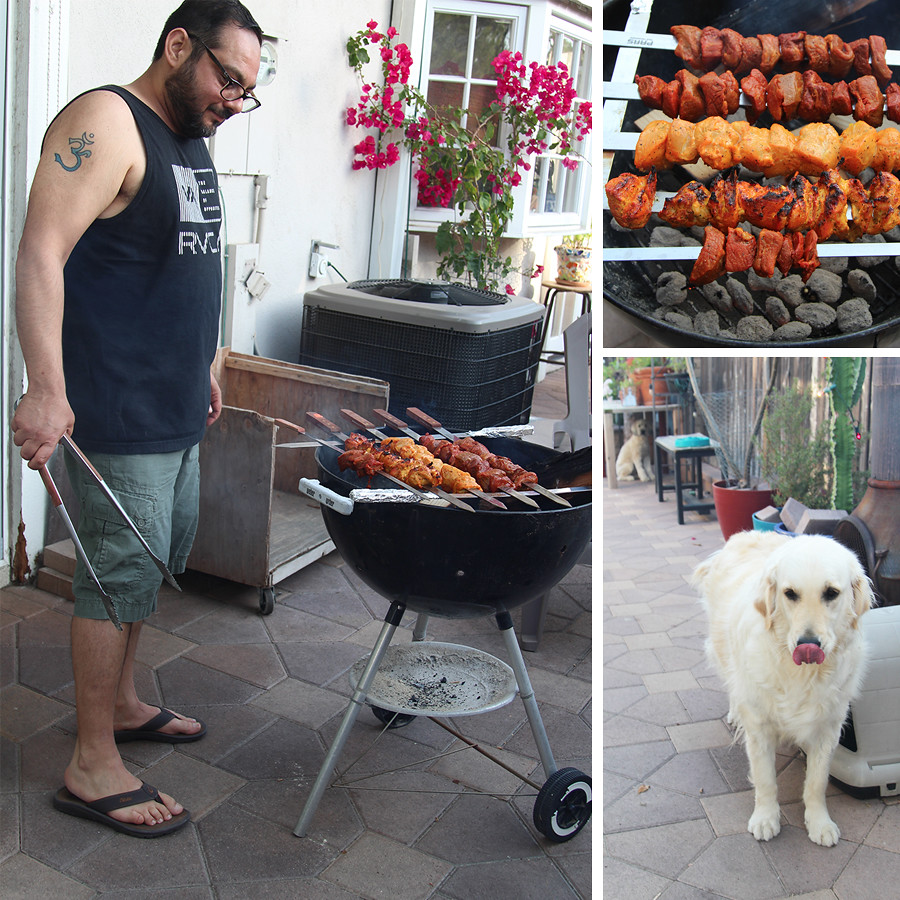 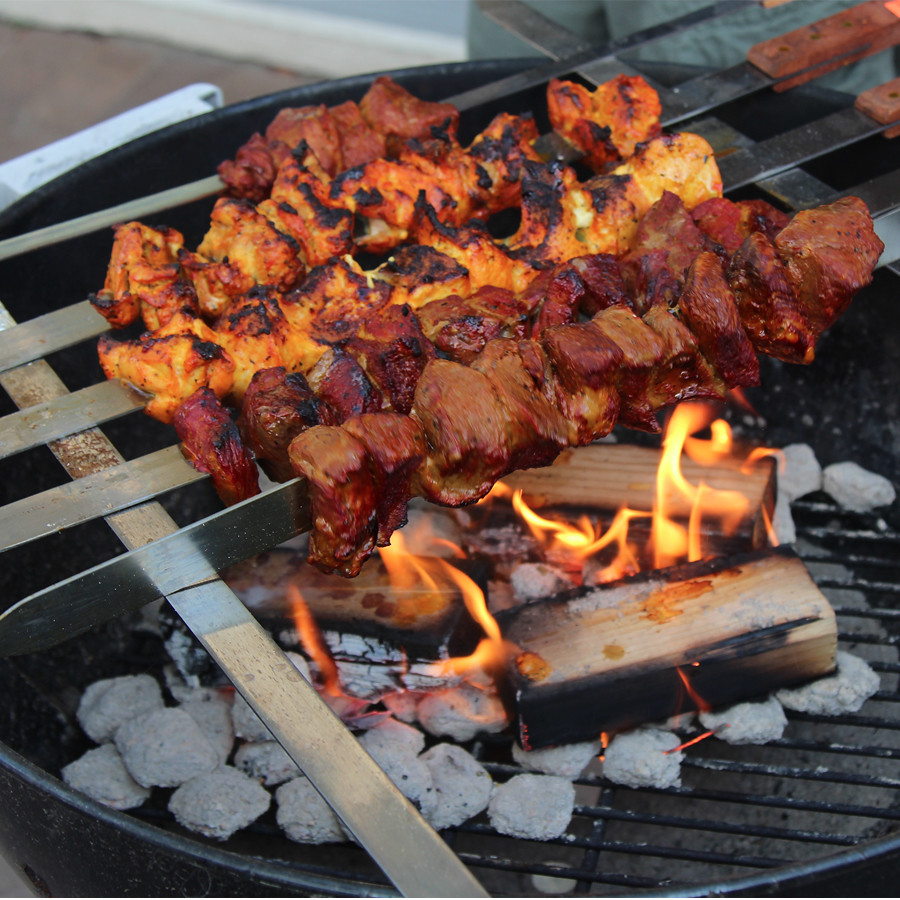 I’ve been super spoiled two days in a row because we broke out the barbecue like it’s summer or something. Last night was Persian BBQ and the night before was frozen grocery store hamburgers. Don’t knock ’em. It meant NO cooking for me! I know, I should have made some kind of potato salad or maybe squeezed some balsamic-glazed bockchoy in on the barbecue… but phooey! I was not paying attention at all because I was off doing my own thing on my computer which is COMING UP WITH AN ART CAMP THIS SUMMER! (Yes, I totally am. Stay tuned.) 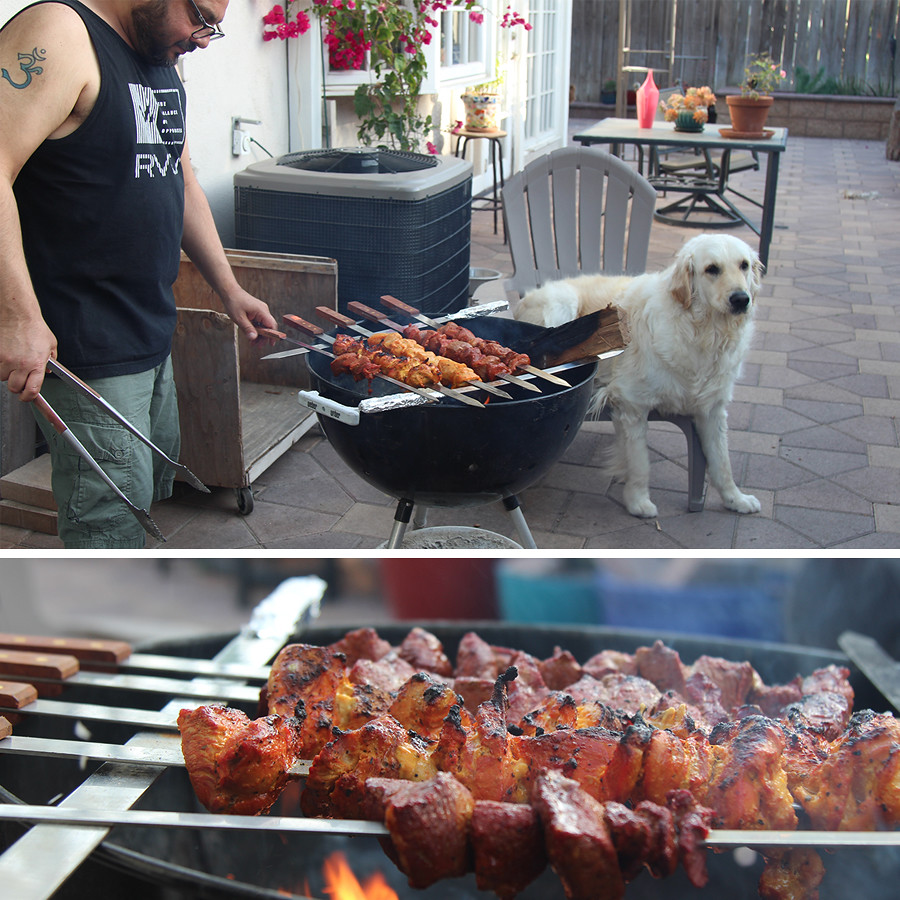 The dogs were quite interested in this new development. “I CAN HAZ SOME, DAD?” 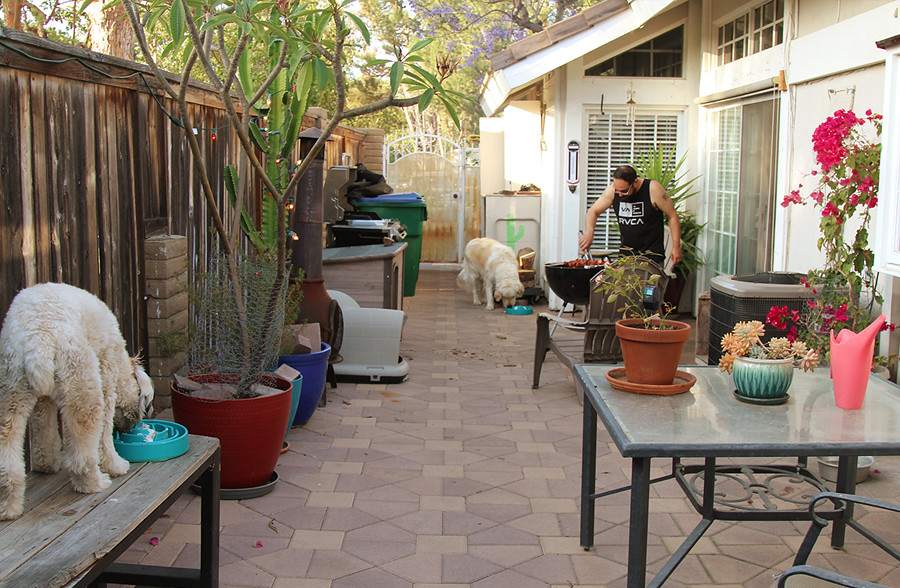 Inconveniently, we ran out of dog food so I did actually do some cooking for the dogs. I threw some chicken in the instant pot and made a pot of sticky rice and they thought it was THANKSGIVING DINNER! Most spoiled dogs ever.

I do love our little patio. Everything is blooming right now and what used to look like a dilapidated abandoned puzzle of pots is now looking like a lush garden. Well, minus the grass and maybe a few hundred more plants. I can dream. Sometimes I miss having a real backyard but then I get my water bill and I think pavers are fine. 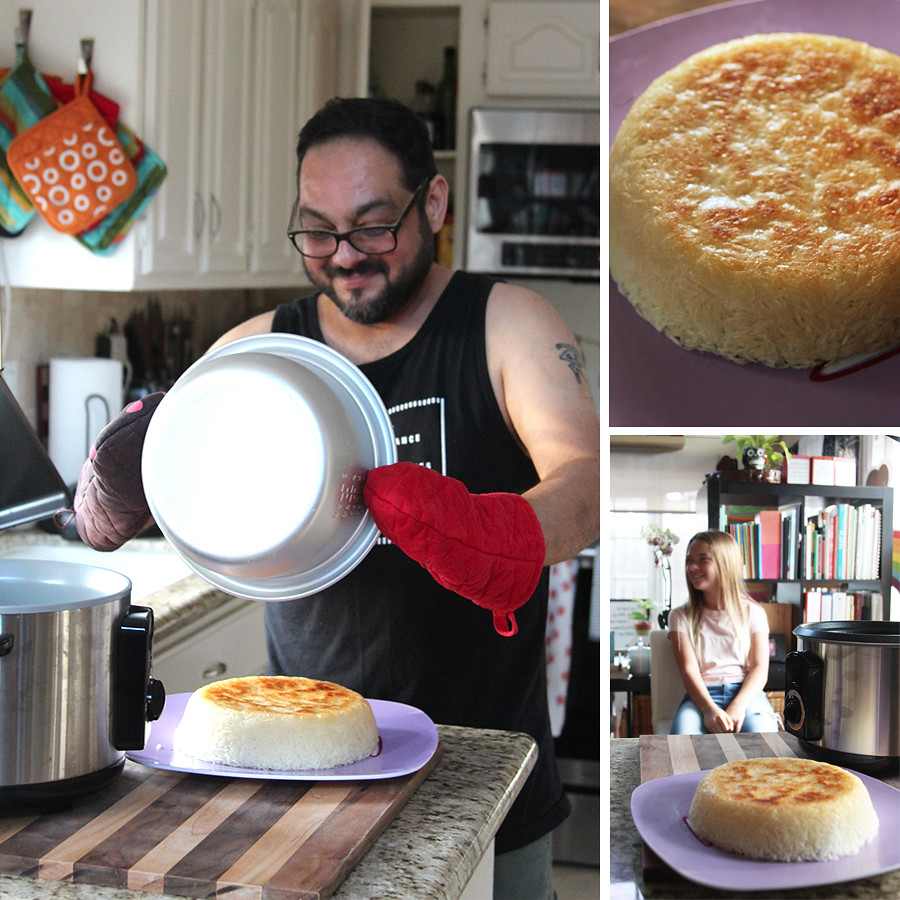 After Payam had de-skewered the grilled chicken and steak he made a pot of Persian Tadique rice. If you know it, you love it. It has this crust on the top that is crunchy and buttery and pretty much as addictive as chips. Everyone loves it except Bug which is fine with everyone. 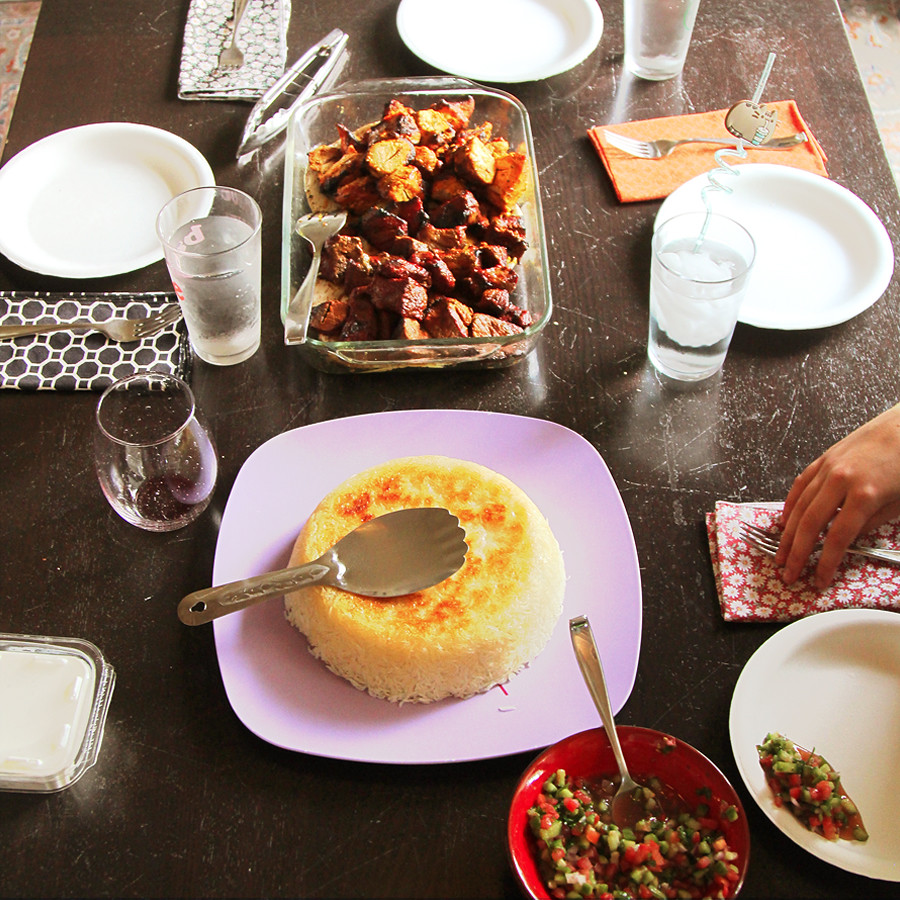 Then we all sat down for dinner. (Note that we had paper plates. Mama was taking the night off! Oh yeah.) And this is what happened when I asked them to pose for me. 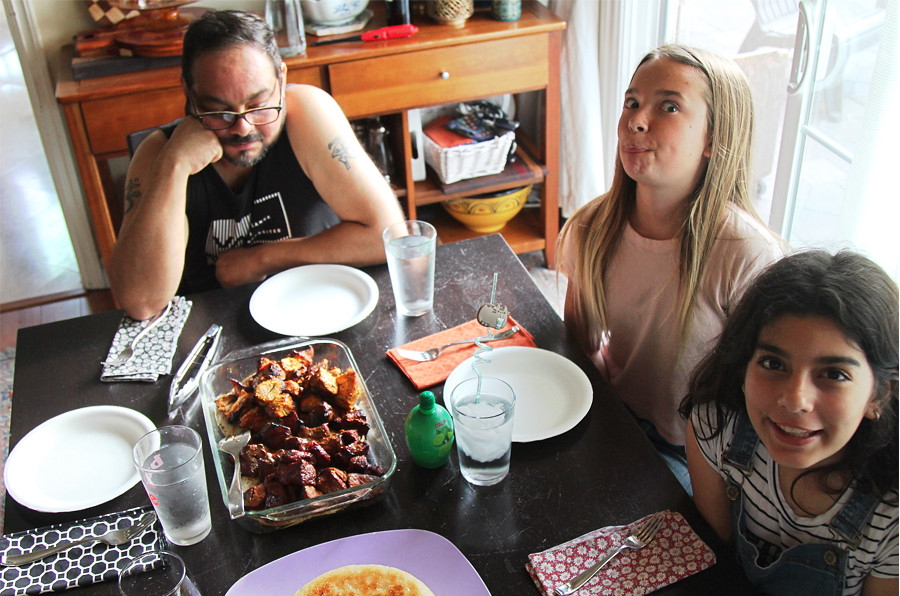 Payam is pretty much thinking, Can we get on with this already? I’m starving. He’s a very good “instagram husband.” 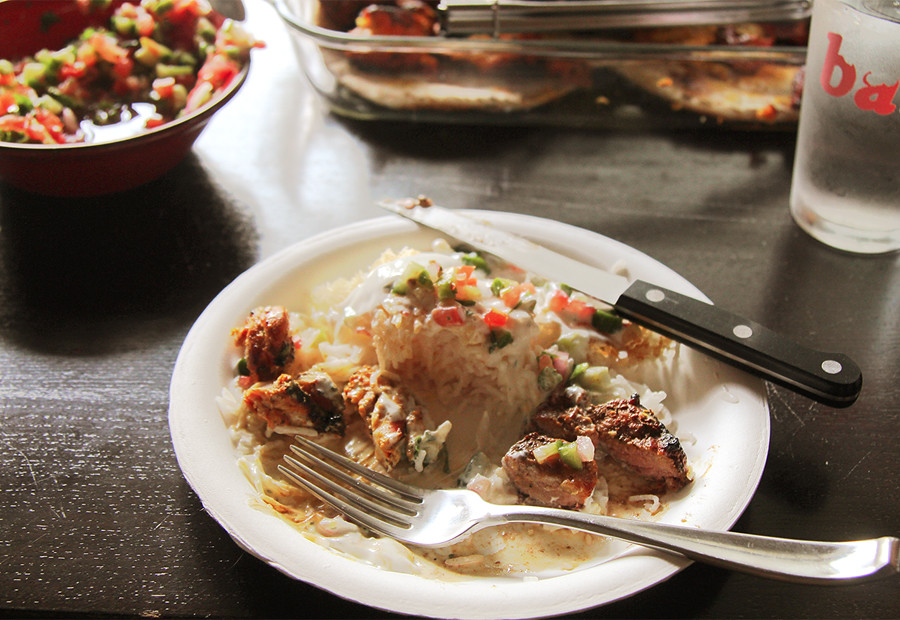 And then we dug in!

I love to put yogurt and Salad Shirazi on top of my rice which is sort of a faux pas to real Persians but they look the other way and let me do my gringo thing. Salad Shirazei is actually “Salad from the province of Shirazei” which is a place but it’s basically chopped up cucumbers, onions, cilantro, tomatoes with lemon and oil or vinegar. It’s delicious. Like salsa but not.

A funny story that we constantly remind Joon of: Yogurt is called mast. So if you have yogurt with cucumbers it’s called mast o khiyar but Joon, being a little girl with few words, once called it “mast o sham sheer” which translates to “yogurt with swords.” We all think that’s a way better name for it so that is what we call it to this day! MAST O SHAM SHEER FOREVER!