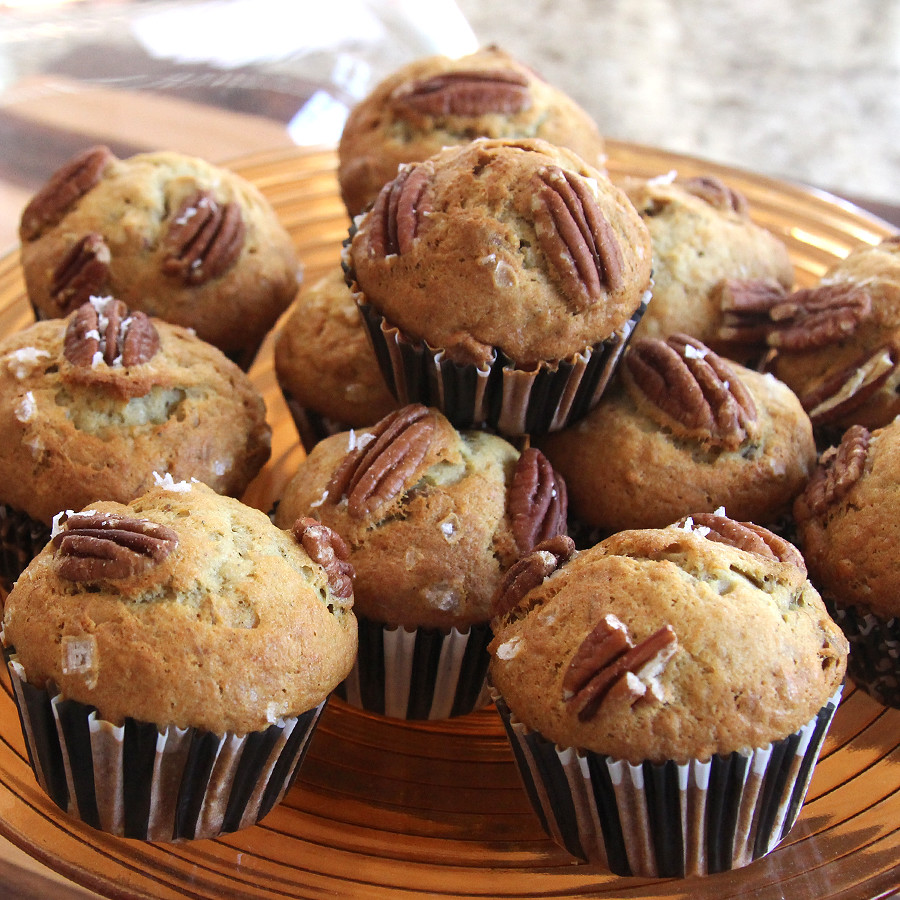 I’ve been progressively using more and more salt when I cook. It hasn’t been on purpose.  It’s something that has crept up on me. Perhaps my tastebuds have built up a tolerance.  It’s gotten to the point that Payam has suggested, kindly, that I cut back.

I blame Blue Apron. Those magical boxes of pre-measured food and delicious recipes have basically taken me from being a mediocre cook to a pleasantly surprising good cook. The secret? Salt! They have me salt two and three times while cooking. That’s three more times than I’m used to. My mom always taught me to let people salt their own food at the table so salting the pot of boiling water, the sautéing onions, the bubbling sauces, before and after something comes out of the oven is way way way a lot more than I am used to. But you know what? Everything tastes delicious! Just like a restaurant. Salt must be their evil weapon. 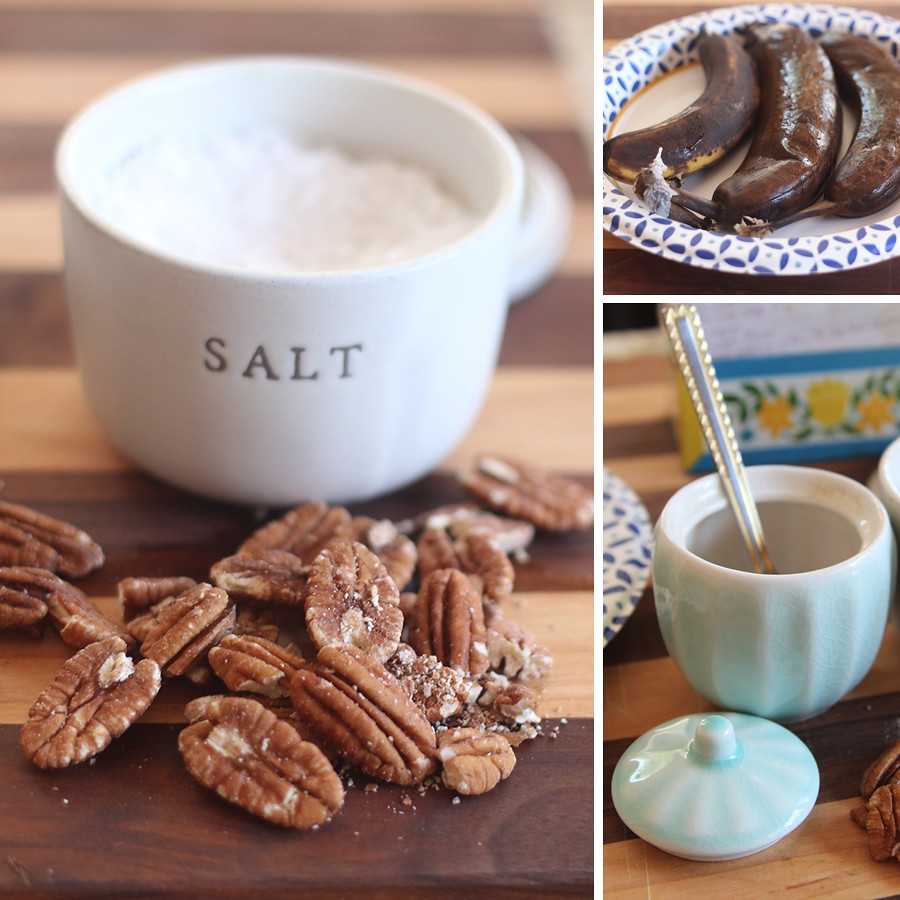 Now it’s my evil weapon. Last week I decided to punch up my usual banana muffins with some pecans (unsalted by the way) and some flecks of Maldon Salt crystals on top. It was DYNOMITE! I’m never going to make banana muffins without salt again! Maybe it’s just me though. I always ignore recipes that say unsalted butter and use the salted stuff anyway. Maybe my salt tastebuds are dead.

Anyway, I wanted to share my new “evil” recipe with you. Do you keep old bananas in your freezer? I always have leftover bananas that pass their perfect ripeness and get banned to the freezer to be made into banana bread at a late date because we are picky. We don’t like mushy sweet bananas with bad spots. So there’s a whole shelf full of dark brown bananas in my freezer. They are gross too. Have you ever defrosted a frozen banana and then squeezed out it’s slippery slug of a fruit from it’s black skin into a bowl? I’ve gotten over the grossness though because they make excellent banana bread and I love that I’m not wasting. 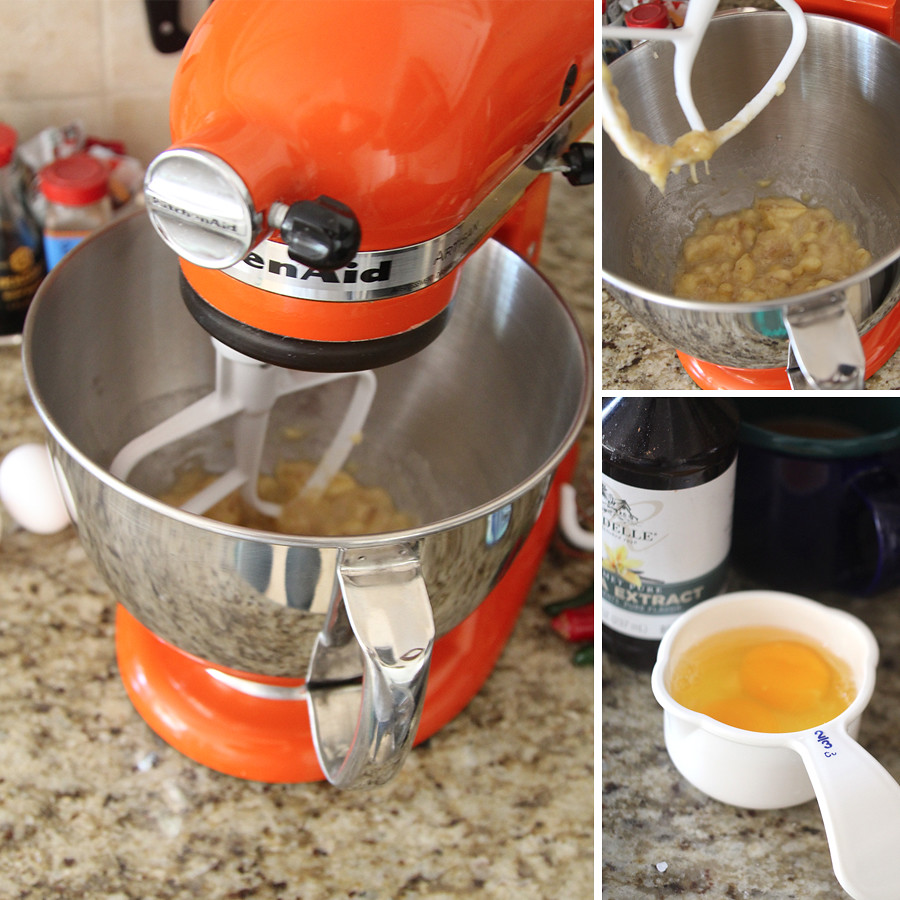 First go in three bananas. I mush them up in the mixer. Then I add sugar and oil, two thirds of a cup for each.  I originally got this recipe from a free Alpha Bakery kiddie cookbook that you can get from Gold Medal flour. I love that cookbook. I still use it as an adult.  I’ve reduced the amount sugar and oil from the original recipe because it calls for three-fourths of a cup which seems like a ton to me. Two thirds seems like a lot too but I’m afraid of cutting it back too much without the muffins getting too dry. Of course apple sauce or canned pumpkin or maybe even a fourth banana could come to the rescue but that’s for another day.

Then I add my eggs (2) and two cups of flour. I let that mix for a while and then add the baking soda (1 tsp), baking powder (1/2 tsp) and salt (1/2 tsp). Then I add some cardamon because I love cardamon. I’ve only added about a teaspoon but I’m thinking I should have added more because I think the flavor could be stronger.  I want it to taste nutty and exotic. 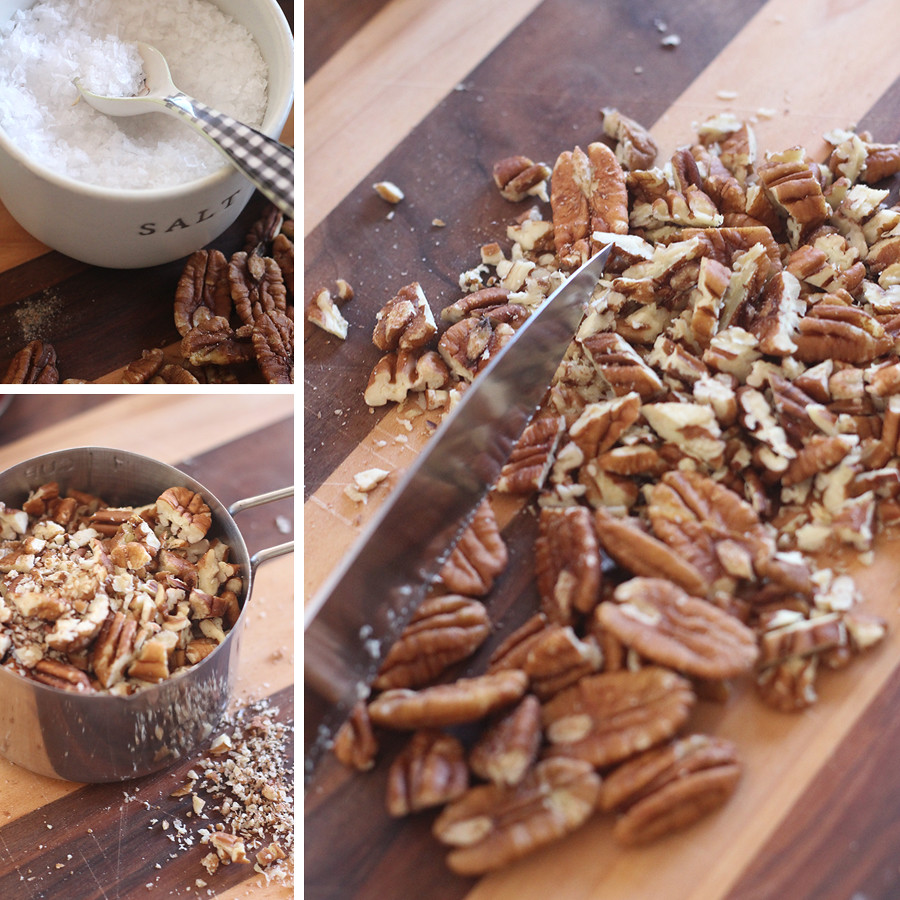 Then I add a cup of chopped pecans (saving at least twelve whole ones to put on top for decoration) and swirl that all together until it’s mixed. 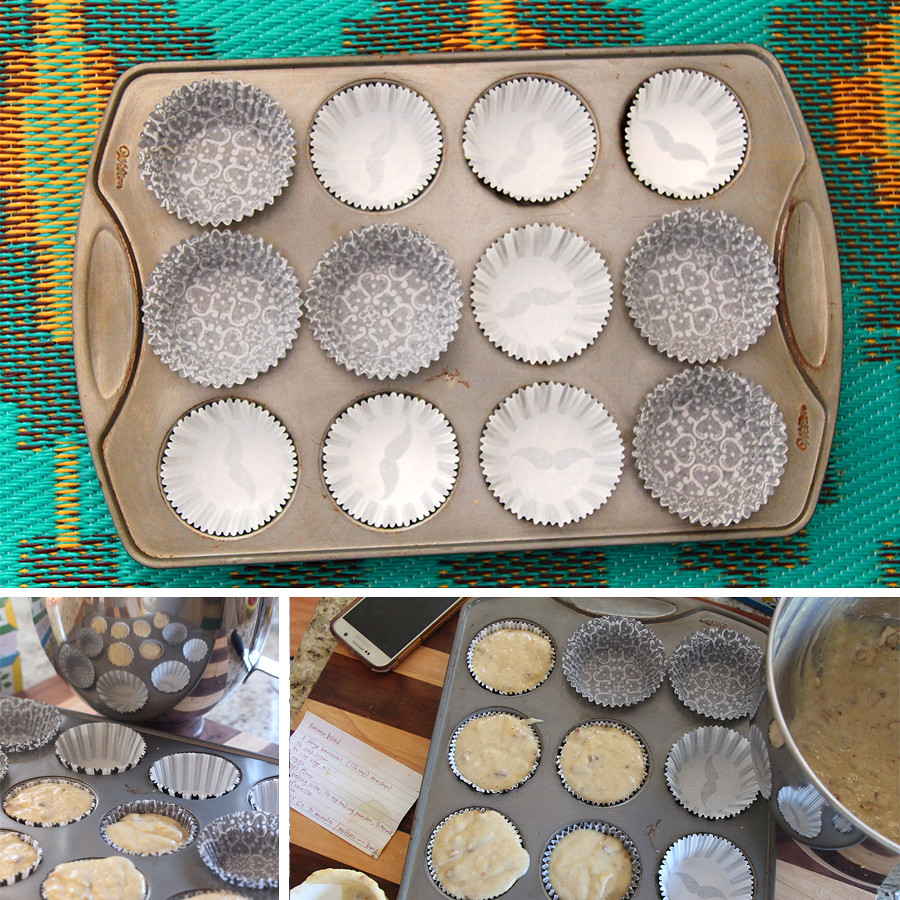 Pour the batter into a muffin tin, with cute papers of course. (I collect cute papers.) Here’s a secret: if you use the same cup you used to measure the oil as a scoop to pour the batter into the muffin tins, the batter will slide out smoothly from the oily measuring cup and into your muffin tin paper like magic.  If you are a messy cook like me, this will greatly improve your drip factor and therefore the pain-in-the-neck-to-clean-up-later factor as well. Pretty cool, right? I mean if you aren’t grossed out by the fact that this recipe calls for 2/3 cup of DISGUSTING OIL. But we’ll just gloss over that because they are very tasty muffins and the moist factor has to come from somewhere. 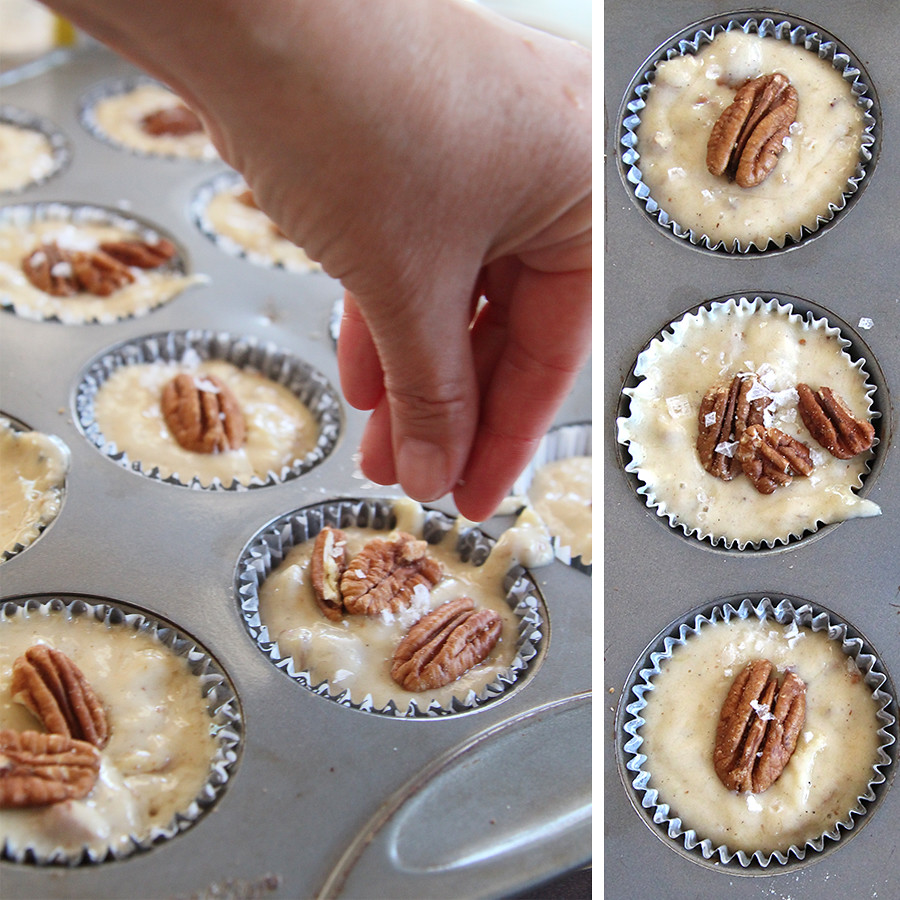 Now the best part: Top your muffins with the leftover whole pecans and sprinkle a tiny bit of flakey salt on each one.  Then pop them into a preheated oven at 325ºF for 30 minutes. Mmmmmm…. now your house will start smelling good and the little ones will come out of their rooms to see what deliciousness is perking away. 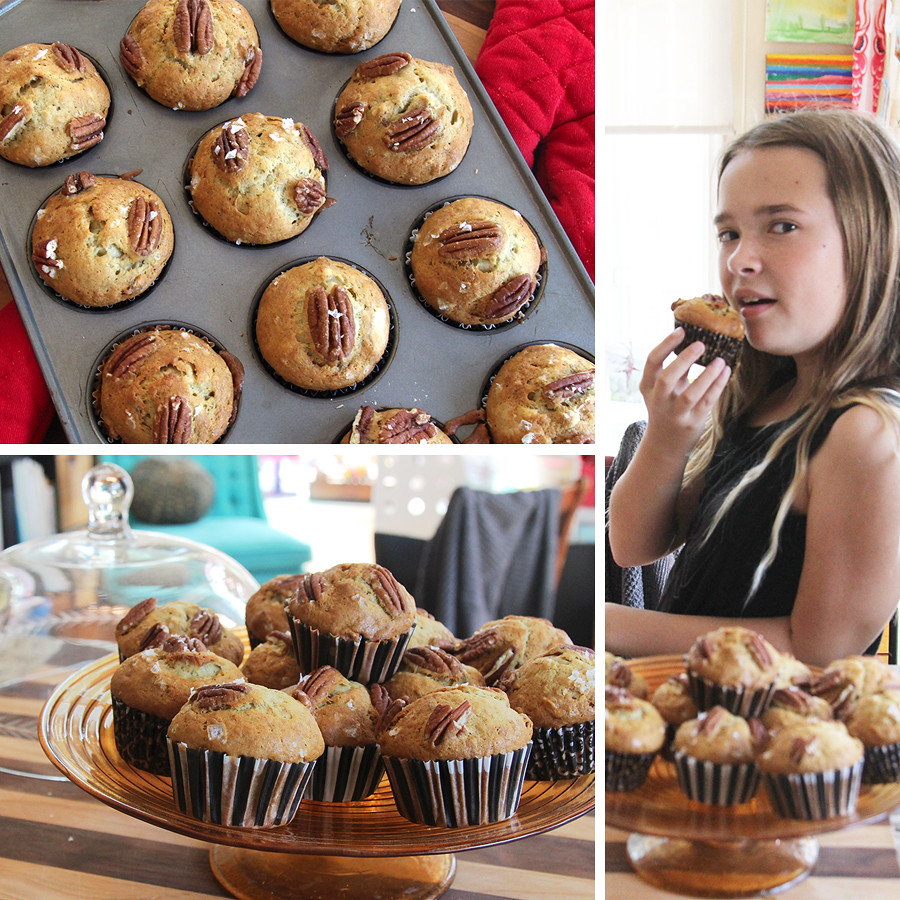 Some of the little ones might not like nuts but that’s okay, that means more for you! I justify it by saying that these muffins are probably better for your than a corn-syrup-filled granola bar.  Don’t quote me on that. Just make them. They are delicious!