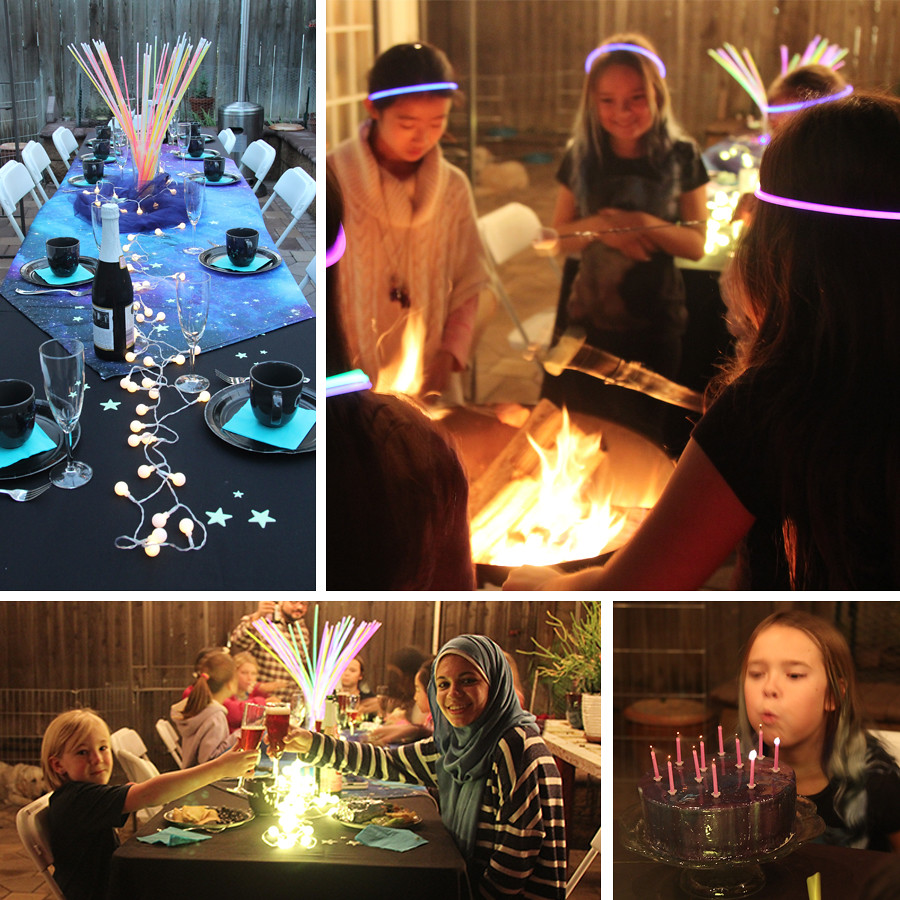 We did it again! We threw a crazy over-the-top birthday party for Bug and I pretty much went insane during it, vowed I’d never do it again and then ended up feeling all soft-and-fuzzy afterwards with plans to totally do it all over again. This is the definition of insanity, right? Crazy party-planner mom strikes again!

But seriously, it worked. It was my first twilight birthday party and we really pulled it off. Everything was so pretty and glowing! Of course photographing a nighttime party is a whole other story but I did my best. Just imagine all these pictures ten times prettier and about 100% less blurry. Though sometimes blur is a good thing. 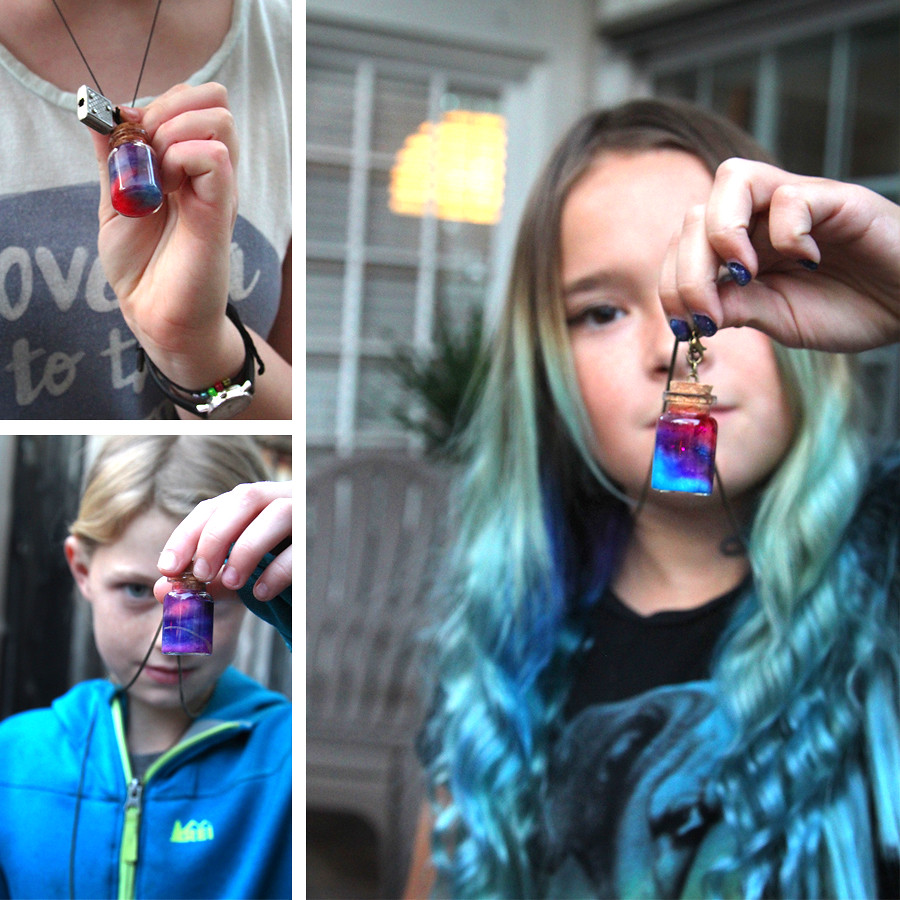 First up I have to show you these really cool nebula amulets we made. These almost didn’t happen.

I had been asking Bug all week what kind of galaxy craft she’d like to have at her party because parties always have to have some kind of activity, and we’re kinda famous for our crafts. Of course Bug answered me the way she usually answers me by not answering me at all. She evaded me and finally when pressed to the extreme, told me that she wanted all eleven of her guests to hang out in her super-crowded ten-by-thirteen foot bedroom. They were going to play “Pusheen School” which is a game they play everyday at school where they take their Pusheen stuffed animals and act out characters going to school. They’ve been doing it for about a year and a half now. All the girls have different Pusheen characters with distinct accents, personalities and nick names. It’s a thing.

I tucked away my disappointment and planned a party without a craft. I figured it was probably better anyway because I always go over the top and regret it later.

Fast forward to the day before the party when Bethany showed up (Yes, she totally flew in just for this party to help me with the cake and to visit her other eleventy California friends) and guess what she asked as soon as she walked in the door? “So what craft are we doing for this party?”

If Bethany is asking what craft I’m doing and I don’t have an answer for her then maybe I should override the no-fun birthday girl and plan an eleventh hour craft!! Because nothing gets my motor running like a last minute craft idea and someone who will appreciate it. Bring it on!

Bug was not amused. In fact, she was pretty much a sullen teenager the entire day of her birthday. Another trip to Michaels was barely tolerated so we could get little amulet bottles and squeeze bottles for colored water. Then when her friends showed up and I showed them how to stuff cotton into the bottles to create the little nebulas she spent most of the time in a huff in her room. I’m such a horrible mom.

However, her friends loved the craft! The little bottles turned out awesome! And eventually Miss SullenPants came back to the party and made one herself and admitted that it wasn’t totally lame after all. 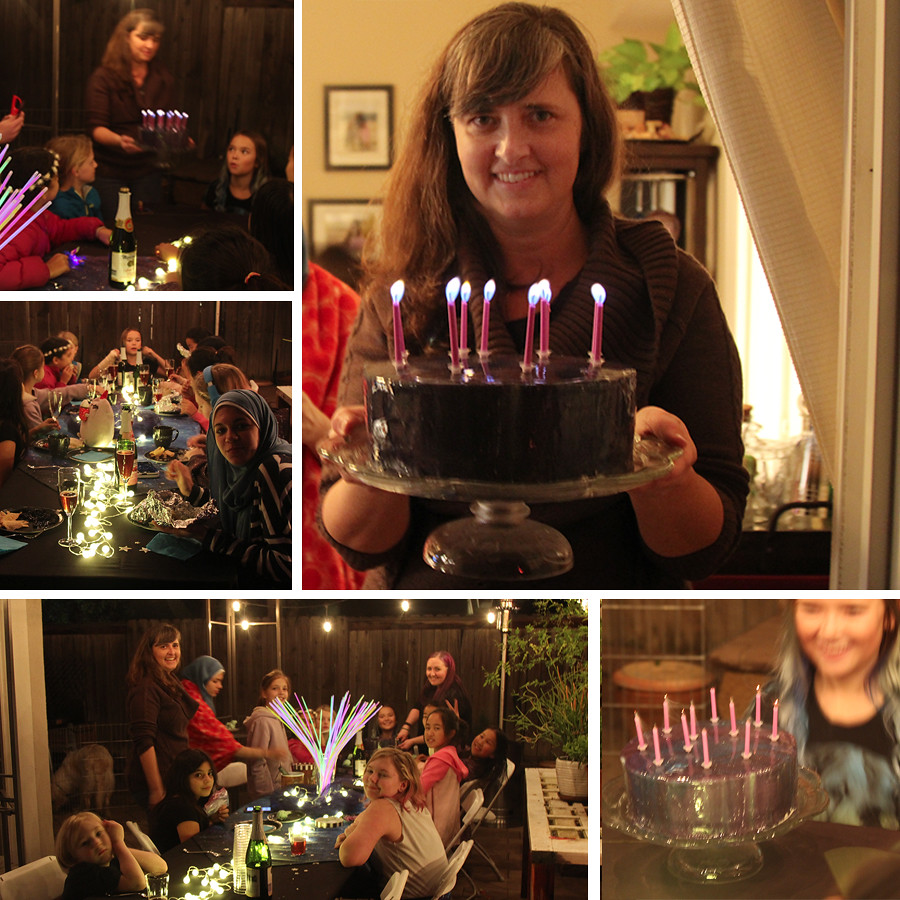 Next up is the cake. THE CAKE. This cake was such a pain in the butt I had to have Bethany fly in to help me make it. We made this cake. It looks amazing but involves corn syrup and gelatin and a ton of food coloring. All naturalist homeopathic types avert your eyes. 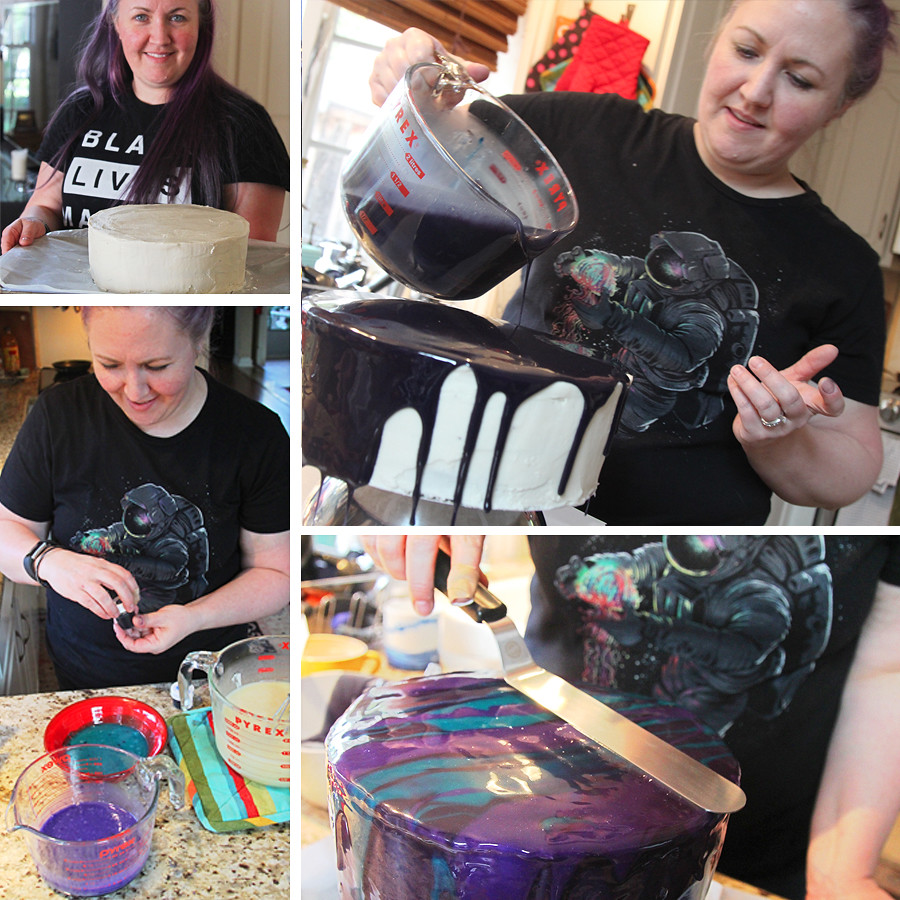 It was an amazing process. Lots of goopy blue and purple dripping glaze all over a purple velvet (chocolate) cake, per Bug’s request. It’s too bad all the glory of this cake didn’t really get captured in the dark of the party but it was a blast to watch Bethany make it. If you follow my instagram feed you probably saw the raw, very-unedited footage (sorry for the nice close-up of our trashcan) of it. 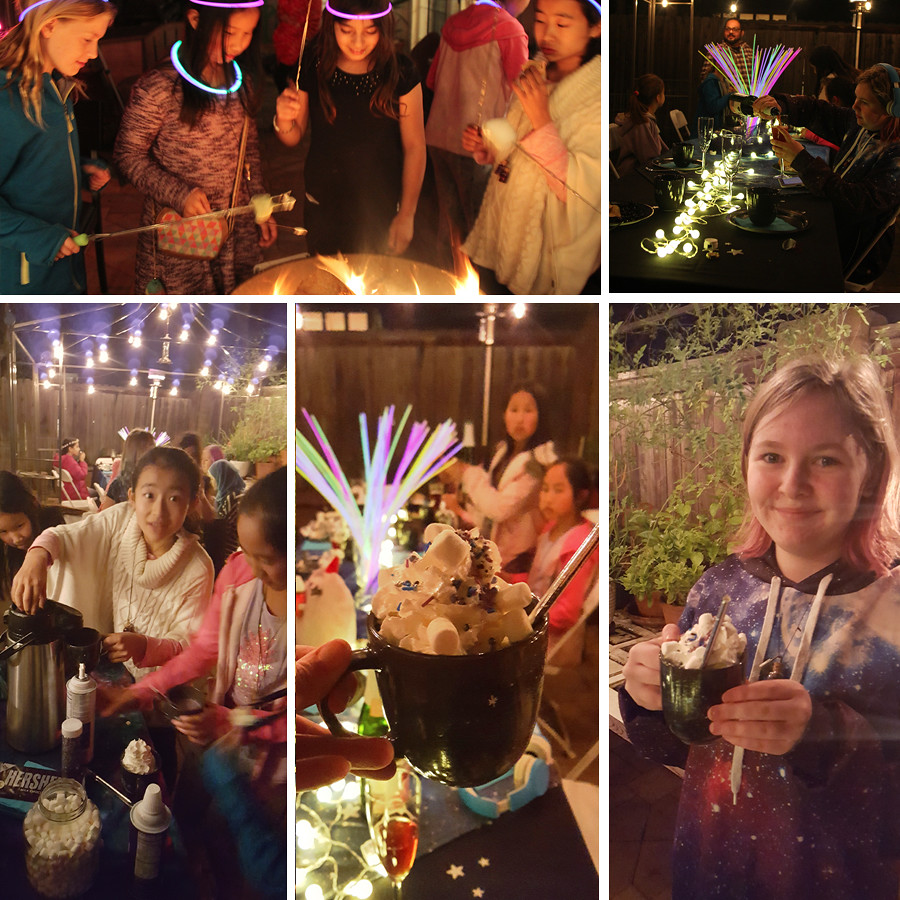 Everything turned out really pretty and very, very sickeningly sweet. The hot chocolate was a super hit as were the marshmallows and the three sources of heat: our good old fashioned Weber barbecue, the cool chiminea thing we found discarded in someone’s driveway a long time ago and the outdoor heater I rented.

Can I just say how cool it is that Payam enables me and tells me to go ahead and rent tables and chairs and a heater for a party that I have no idea what the weather will be like for? The weather has been raining for about four weeks straight and I’d been watching the weather forecast like a hawk on crack. Everyday, I would announce the likelihood of rain on Bug’s party to everyone around me like it was my own stock market ticker. Predictions went from 100% precipitation to 25% precipitation to finally settling on 45% precipitation and AMAZINGLY it did NOT rain during Bug’s party. It was cold but our heat sources worked out perfectly and the fact that I warned everyone to dress for weather in the invitation helped. Who has a birthday party outdoors in January?! Crazy Californians, that’s who. 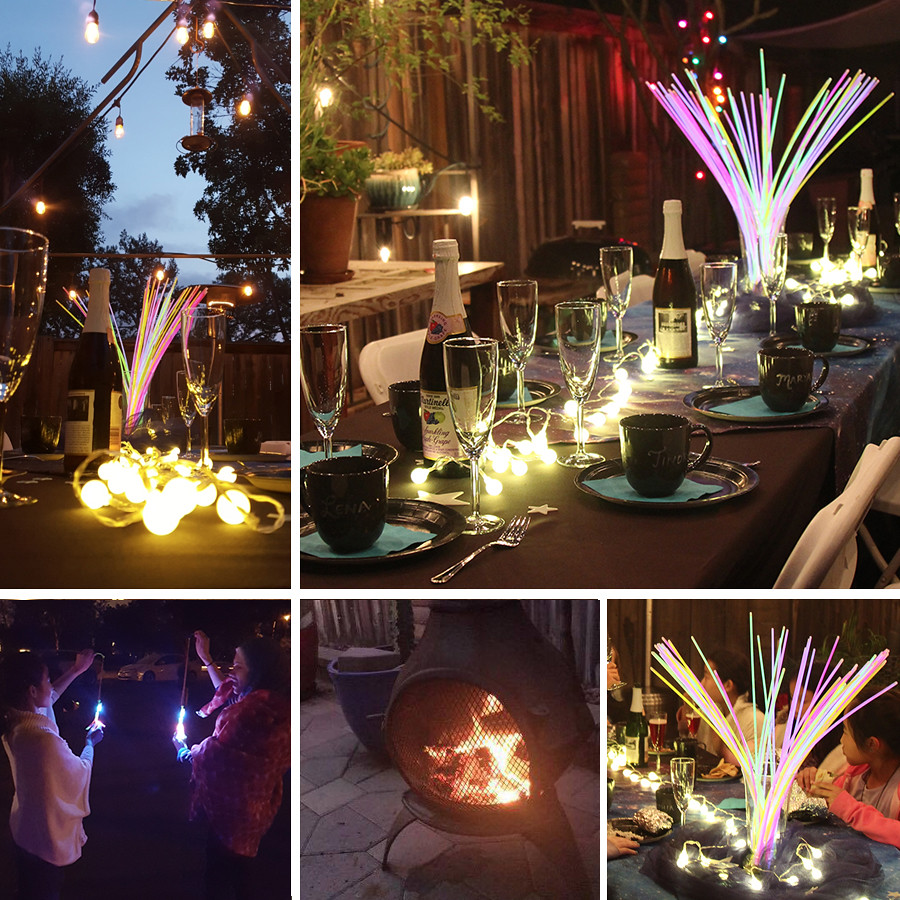 It all worked out. Everything glowed magically. I stretched battery operated bulb lights along the middle of the table, scattereds some glow-in-the-dark plastic stars on our galaxy printed tapestry and then set a vase full of glow-stick necklaces in the middle. 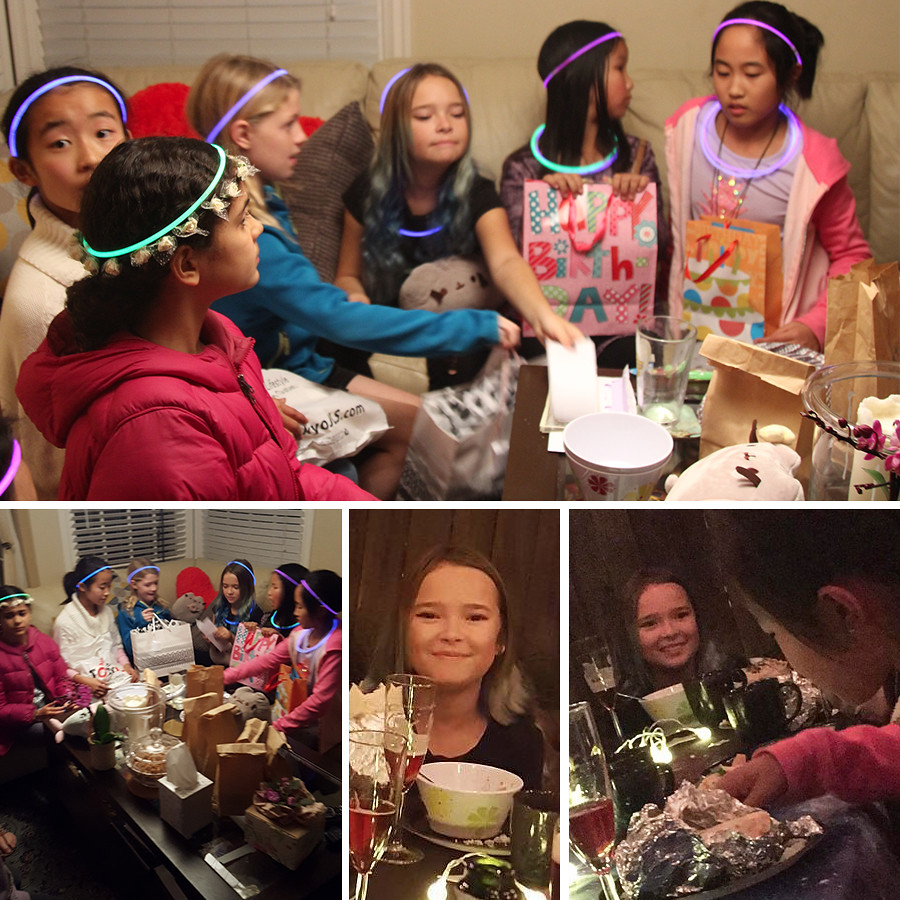 Bug actually did have a really good time at her party. It was hard getting there though. She fell on her wrist while rollerblading earlier in the day and was in some pain which didn’t help her mood when her mom stole her friends to do a stupid craft. Thankfully, her bad mood wasn’t anything some secretly applied cat-eye make up in the bathroom couldn’t bribe out of her.  She’s getting to the age where we have started bonding over our mutual anxiety-related quirks. She understands my freak-outs over guests arriving and the house not being tidy and I understand her fear of crying in front of her friends. It wasn’t an easy thing for her but she muscled through it

And as she was cheers-ing crazily, with toasts to Toaster (her Pusheen stuffed animal) in grown-up glasses of sparkling apple cider leftover from our New Year’s shindig, she caught my eye and gave me a smile that said it all. She really did appreciate this party even though it was a pain in the butt to make happen. So yeah. I’ll probably keep on keeping on until I’m too old to keep on.

Or maybe next year we’ll just take a road trip!