posted in Family Matters, fighting the fat gene, I forgot to tell you this earlier, the dogs on July 8, 2016 by SAJ 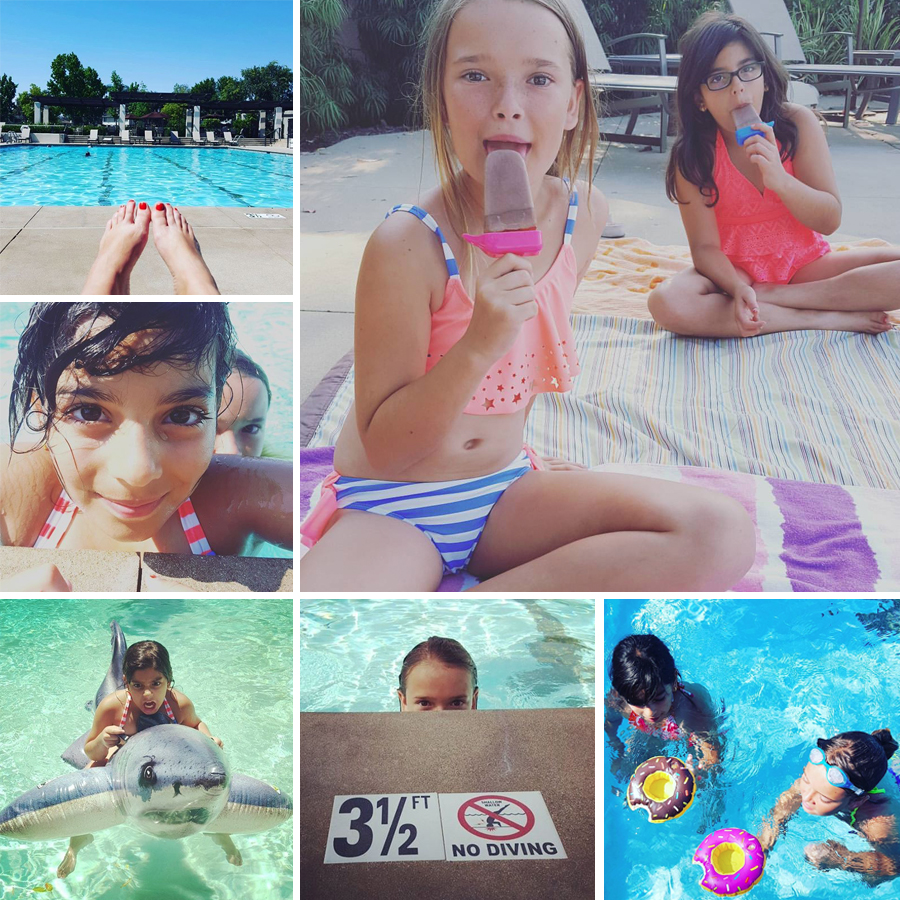 Hello Summer!  It’s time to report on what we’ve been up to.

What have you been up to?

We’ve spent a lot of time at the pool. Since tennis camp is over I’ve set up a strict schedule for the girls in the hopes of saving my sanity and my struggling business. The kids are allowed an embarrassing amount of Minecraft time during the morning when I usually get the most work done. After lunch they have screen-free time (which usually involves a lot of moping and complaining but eventually morphs into real play time) and then by three we are off to the pool.

We have an agreement. If it’s over 80 degrees and after three, we can go to the pool. This helps me a lot with managing my expectations. I never get much done when the kids are unplugged so I might as well accept it and get some reading in or even some swimming(!).  And by reading, I mean a real book but sometimes I spend an embarrassingly large amount of that reading time on Facebook and Instagram. The kids do not fall far from the tree. 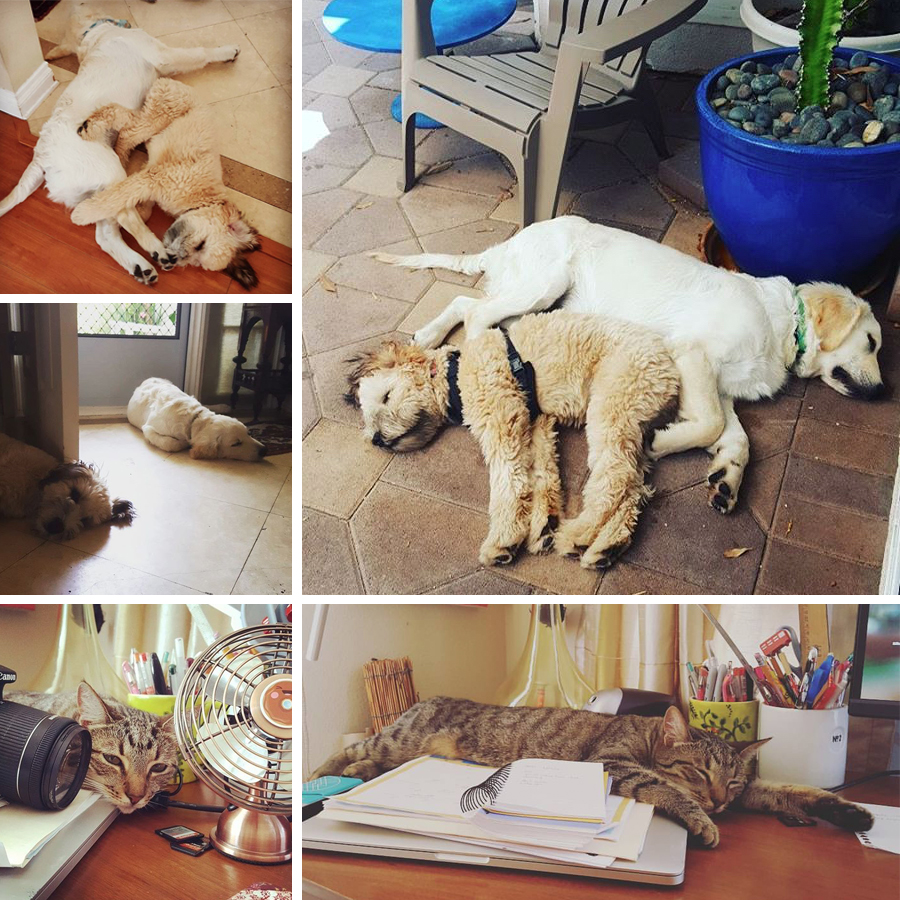 Nothing says summer more than lazy, sleeping pets. Or do they do that all year around? I don’t know but the hotter it is the more they stretch out and it’s funny.  It’s like their bodies melt into whatever surface they find themselves on. They really do know how to beat the heat. Just sleep it away! 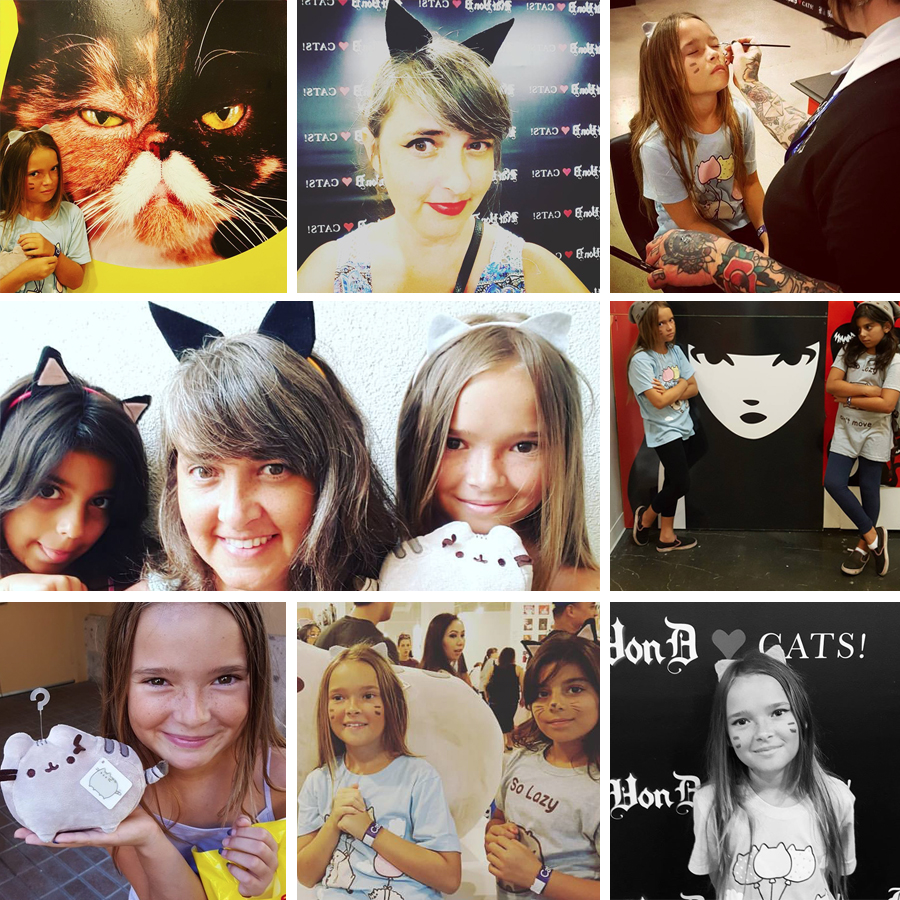 Not us though. We’re too busy for sleeping. Last week (technically the week before last week since we have the girls every other week) I took the girls to CatCon LA. It’s a convention for crazy cat people like us and we had a blast.  We spent way too much money on Pusheen swag but it was totally worth the overdraft protection fees because you can never have enough Pusheen swag.

Bug has been talking about wanting a Pusheen-Minecraft party for her birthday. That should be a fun challenge. Good thing I’ve got a headstart to think up something. I’m trying to talk her into a Pusheen doughnut theme, that would be super cool and not difficult but I have the one kid in the whole wide world who doesn’t really like doughnuts. I guess I took her too many times back when we lived at the beach and used to kill time at the local doughnut shop. 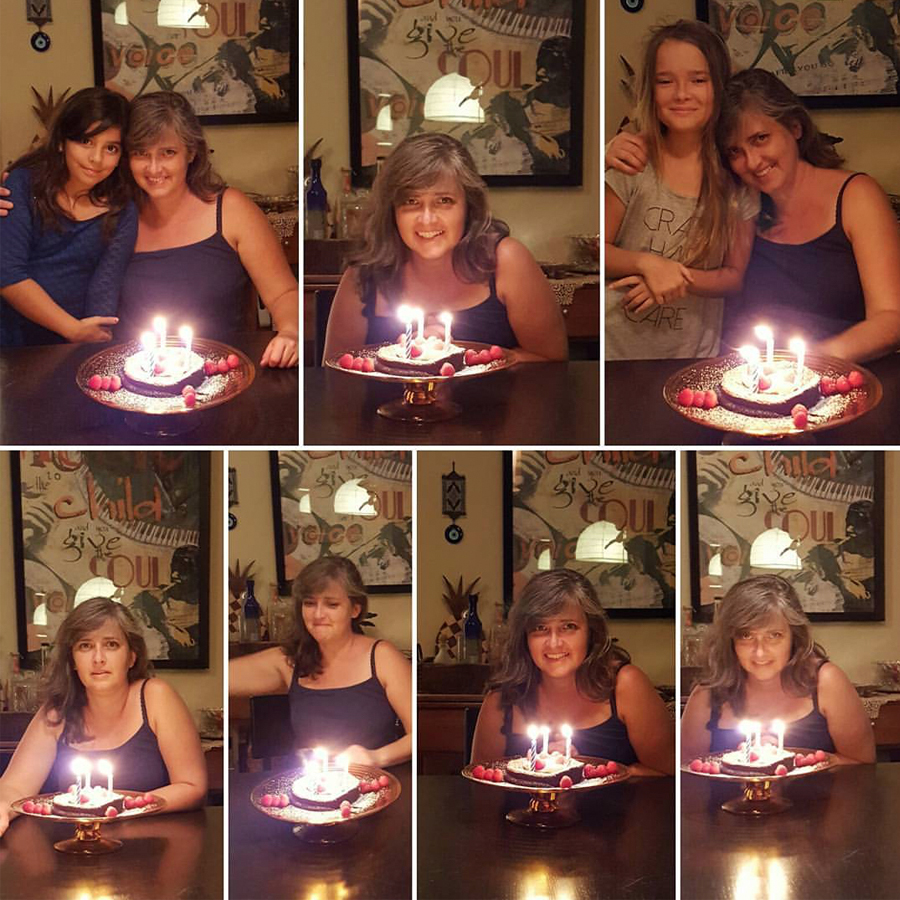 My birthday was this week and I’ve been spoiled rotten with a homemade chocolate cake, a pasta maker attachment to my fancy mixer and a promised trip to Legoland this weekend! Yes, that was my choice. I’ve always wanted to go. I promised Bug a trip forever ago but never gotten around to it so I special-requested it for my birthday! I know. I am so spoiled. Payam is one of a kind crazy gift-giver and no, you can’t steal him.

I’m a big fat forty-four! FORTY-FOUR!! That’s like one more year until I’m halfway to fifty!  Funnily, I’m proud of my age. Of course I’m looking at these pictures trying to determine whether my face is fatter or not but you know what? I really don’t care anymore. I’m really, really healthy (says the doctor) because of all my intense crazy-woman yoga workouts (to be explained later) so I’m just going to be proud of where I am at for a change. I’m in a good place.

It really is true that a lot can happen in a year.  It’s a been a year now since we moved in with Payam and it’s turning out to probably be one of the best parts of my life. I’m a naturally anxious person and the happier I am, the more worried I am that something bad is going to happen.  I think I was taught that too much happiness usually ends in pain so I keep waiting for the hard times to hit. Like that’s the price of being happy or something. It’s twisted but I’m slowly starting to believe that you really can be happy and stay happy. What a crazy idea.  I’m really thankful. It’s good to be here. 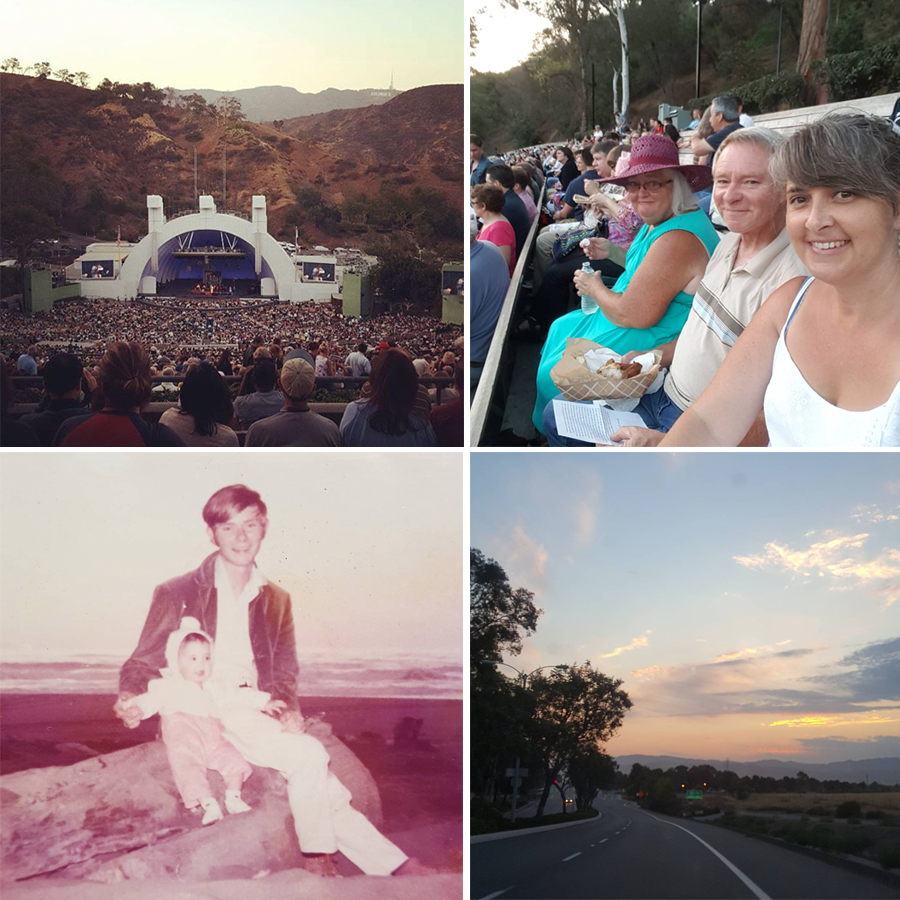 And speaking of being here and now and enjoying the present happiness… (eye roll for that the obvious and clunky transition) I took my dad to see Garrison Keeler’s last Prairie Home Companion show for his father’s day gift. It was great.

First of all because I hardly ever do things with my parents, just me and secondly because the Hollywood Bowl is probably my most favorite venue ever, right up there next to the Santa Barbara Bowl. I love outdoor amphitheaters that allow alcoholic beverages. There really is nothing better than sitting outside on a warm summer night, enjoying a show (and the sunset and the stars…) while sipping wine from a plastic goblet. They aren’t stingy either. It wasn’t my most favorite wine but they poured it to the very tippy top so that I was actually a little bit stressed about carrying it from the vendor stand to my seat without spilling it on my favorite new white tank top.

It was a great show. I didn’t even care that we were so far away in the nosebleed section that we couldn’t even see Garrison Keeler’s face. It was just a really fun, sweet sentimental night. Especially because Prairie Home Companion is one of my dad’s favorite radio shows and it was Garrison Keeler’s last show AND because Garrison Keeler grew up “in the meeting” which is always interesting to those of us who share similar history. 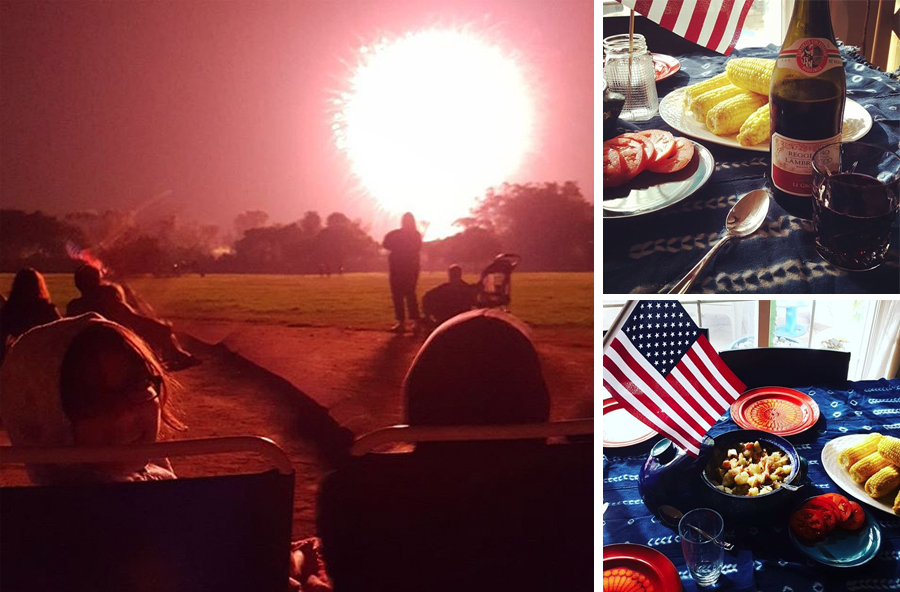 Fourth of July was nice. We took the dogs to the pool at Payam’s moms house and it was the most hilarious thing. I don’t have any pictures of that mayhem because I need to buy a new battery for my waterproof camera and I wasn’t going anywhere near the pool with crazy dogs and my phone at the same time.

The girls and I splashed around in the pool with our amazing collection of giant snack food floaties  and then Cody got brave enough to jump in. He’s naturally a water dog, being a Golden Retriever and all but we were a little worried he might betray his genetics because when we took him to the beach he was afraid of the waves. But the genes kicked in and he didn’t let us down! He swam and swam!  He mostly just swam towards us putting us at risk of being scraped by his long dog claws but he seemed to really like it. He didn’t really get the idea that the steps were the way out but then he has the intelligence of a three-year-old so what do I expect?

Whiskey was having none of the swimming. At one point Payam threw him in and he can swim but he didn’t like it. I think he’s too smart and if there aren’t any ducks to chase there really is no reason to be floundering around in this wet stuff where there is no bottom.

Then we went home and had our classic fourth of July dinner that always includes my favorite German Potato Salad. That strangely no one but me really likes in this family?!!  What is wrong with them? How can you go wrong with potatoes, bacon, vinegar and sugar? 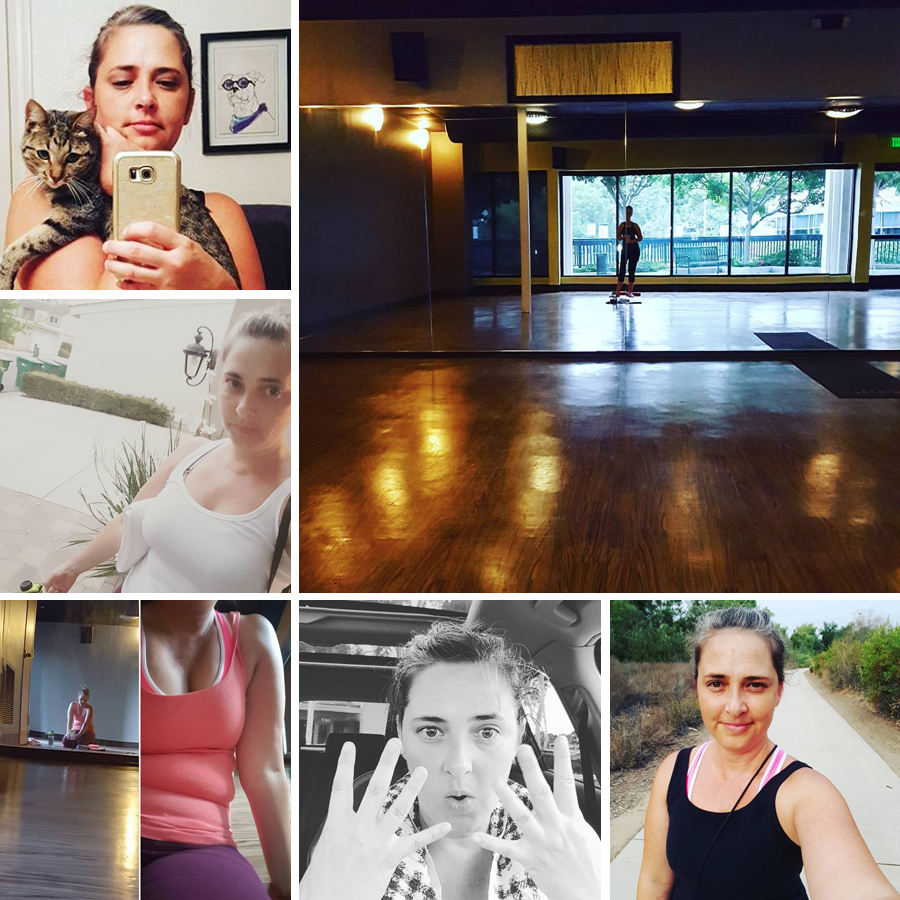 About those crazy-woman intense yoga work-outs… I’ve been going for six months now. I am sorely disappointed that I do not have a chiseled yoga body that I thought I would have by now. I’m working against the age curve and the fact that I really like to (over) eat regularly so I think I’m perpetually fighting against myself and slowly becoming more ripped under a healthy layer of fat.

But I am hooked. I’ve started to really become attached to my yoga instructors. They work so hard to keep us motivated. I feel like I can’t let them down. It’s also a nice get away in the morning just for me so I’m keeping on keeping on. 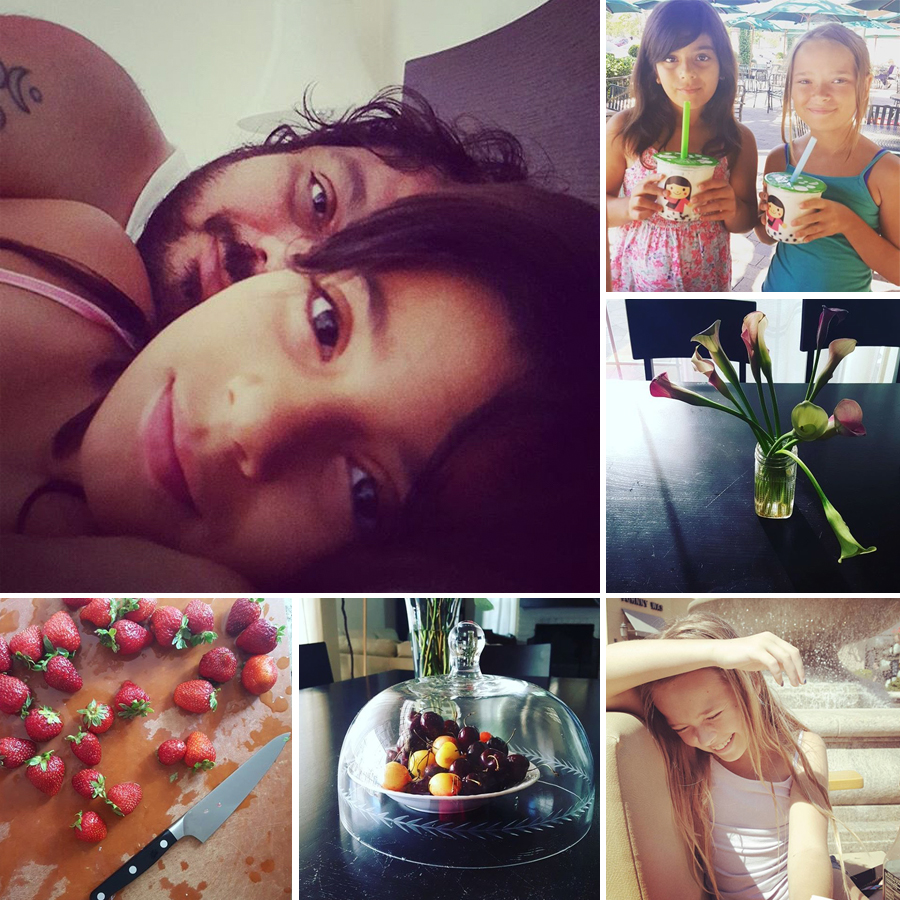 That pretty much sums up summer so far besides the fifty other things I’ve probably forgotten. 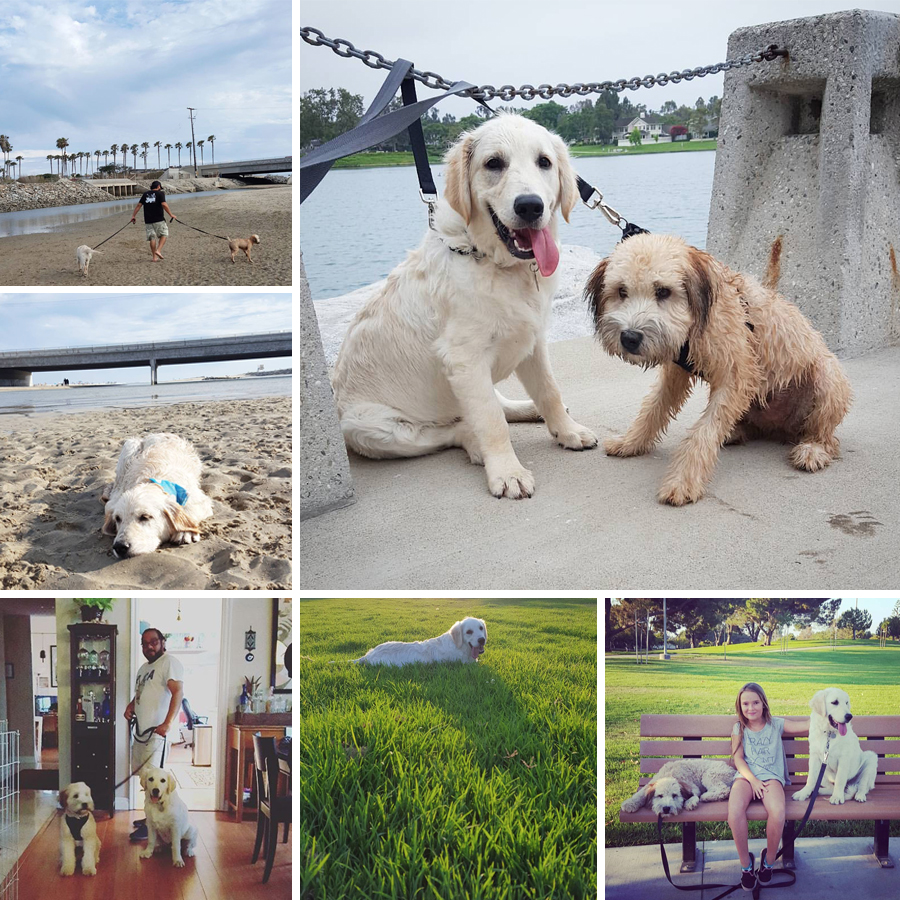 Yes! I almost forgot to tell you about the time Whiskey jumped into the lake!

I was walking the puppies to the lake like I usually do and Whiskey was pulling like a mad man because he is terrier and a natural hunter of vermin. There are always bunnies and birds and ducks that call out to him to be caught and it drives him absolutely batshit crazy. I was so tired of holding him back and feeling like my arm was about to be ripped off that I decided to let him go flying down a path that I thought dead-ended at the lake.

Little did I realize that he would think the waveless lake was a flat surface to run on and throw himself into it to try and catch a duck. Boy was that a surprise for him. There was a man fishing near by and we both cracked up laughing as soon as it happened. I know I should have expected this but I really didn’t. He’d never done anything like that before and we’ve been to the lake hundreds of times.

He didn’t like the lake that much and he paddled around back to the shore as quick as he could. He couldn’t quite pull himself up on the man-made shelf so I swooped down and grabbed him by his harness and pulled him out with a big splash that got me half wet too.

Then we continued on our walk with one really skinny puppy dripping and shaking all the way home. Payam was a little disgusted that we had a wet lake-water puppy but I thought it was a great morning adventure.

6 Comments → July Update (for lack of a better title)