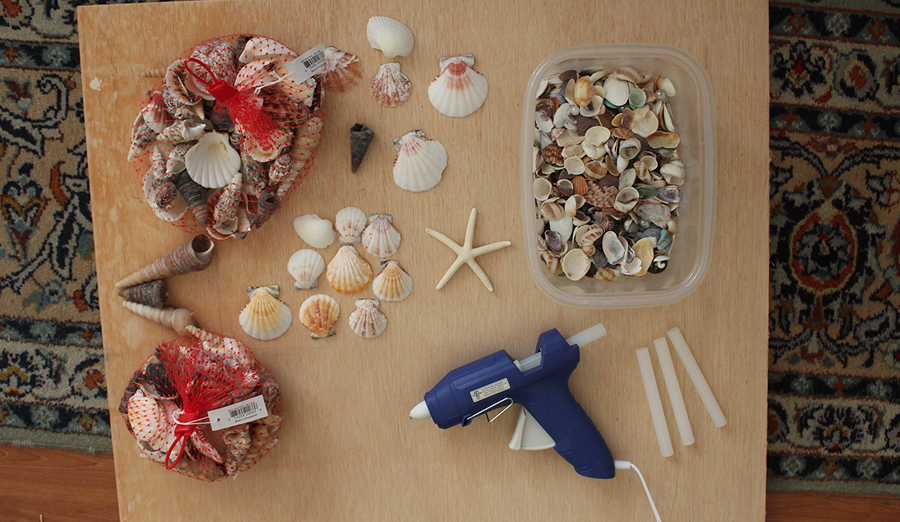 As you know I’ve recently moved and I’ve been all sorts of busy with unpacking and making my new home perfect. This is my happy place and I can put in incredible amounts of work in when it comes to pretending to be a stylist. We’ve been hanging pictures, making shelving units from scratch and cleaning everything from top to bottom. We have a housewarming party scheduled for this weekend and there’s nothing like a time crunch to make it all happen even manically.

I had a crazy cool project in my head. I wanted to create something like this cool all-white sea shell sculpture except I didn’t want to become a ceramist in order to pull it off. ($200 is a out of my budget.) I knew oven-baked clay was a little out of my skill set and play dough would never work so I thought I’d just spray paint the real thing white and it would look awesome! Heh.

Then I took a trip to the shell shop and learned that sea shells are not really collectible any more. You can buy them but it’s not really ethical since so many of them are endangered. You can’t collect shells at our beaches anymore without the park rangers scolding you. It’s such a drag because I remember collecting shells as such a favorite part of my summer as a kid. Maybe someday the weather will change and our beaches will be covered with them again but for now they are on the rare and protected side.

So I only went home with two bags of shells instead of the 20 I needed. I really wanted to make a big piece that would make a big impact on Bug’s wall.

I laid out my wood and started arranging my shells. I had a pretty good stash of old shells in my craft cabinet from other projects but sadly, I just didn’t have enough. Boo.

Time for plan B. 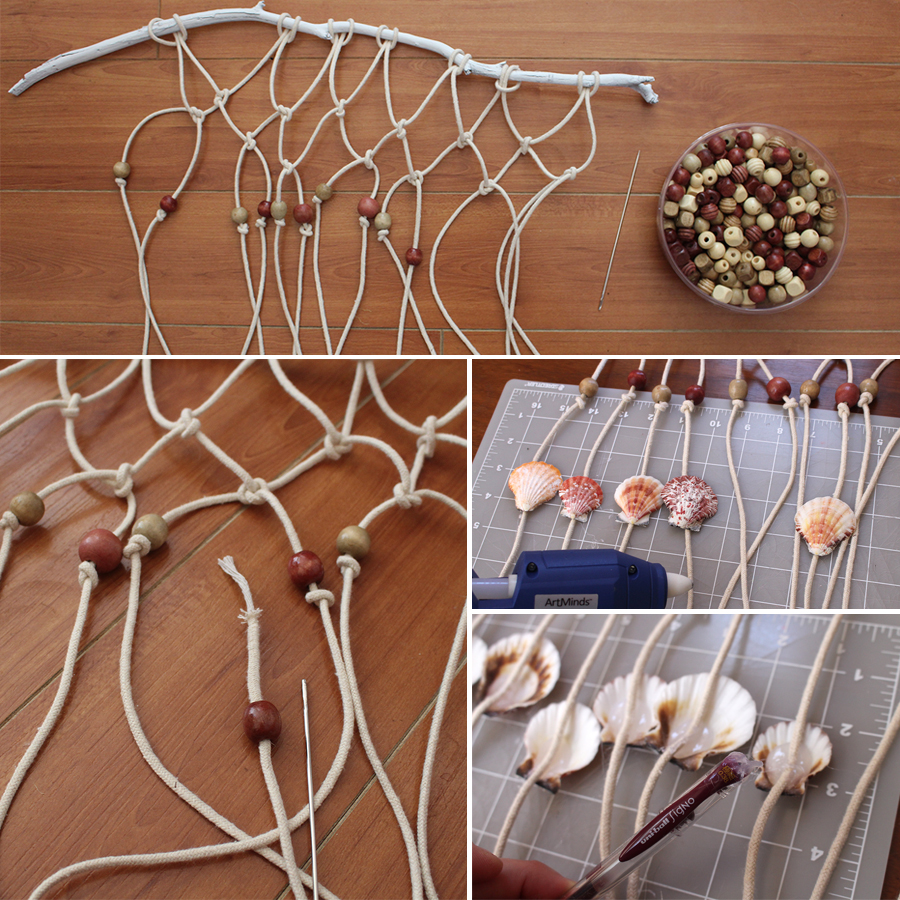 Macrome! I remember macrame from when I was a kid. My mom had pot holders made out of rope and wooden beads. I can picture them vividly with her tupperware planters with the little water window in the bottom so you could tell if your plant needed water. Remember those? The only one I can find on the net is this one but my mom’s were rust colored and round.

I googled some macrame tutorials and decided to make a simple wall hanging. It’s easier than I thought. As I was tying knots I was thinking I could keep going and make a whole hammock this way. But then I got tired of making knots. So I pushed some beads on there. Tied a few more knots and glued on some shells. Hot glue is great. Especially when you use your handy dandy Tokyo Pen Shop pen to push the rope down into the glue instead of your finger. Not to worry, no pens were harmed in this making. The hot glue peeled right off the pen, good as new.

Then I hung it up in Bug’s room. It didn’t quite make the impact I wanted but she likes it. 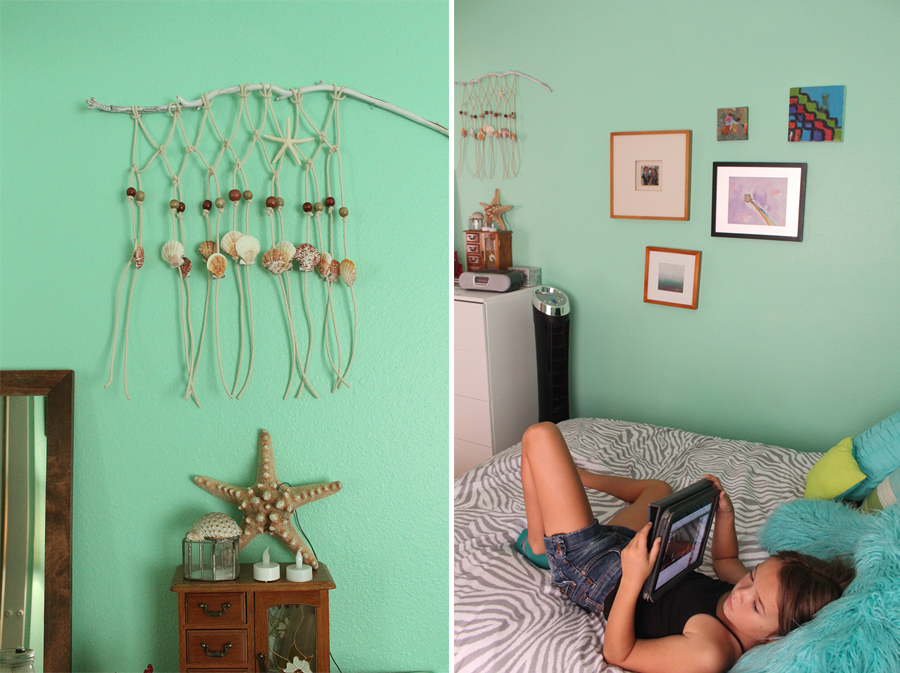 It’s just as well I didn’t end up making a big art piece because she wanted to hang a bunch of her own art including her masterpiece “Cat Pooping Rainbows.” I love that picture. I love it so much I scanned it and put it in my Etsy shop in case anyone else wants to buy it too. 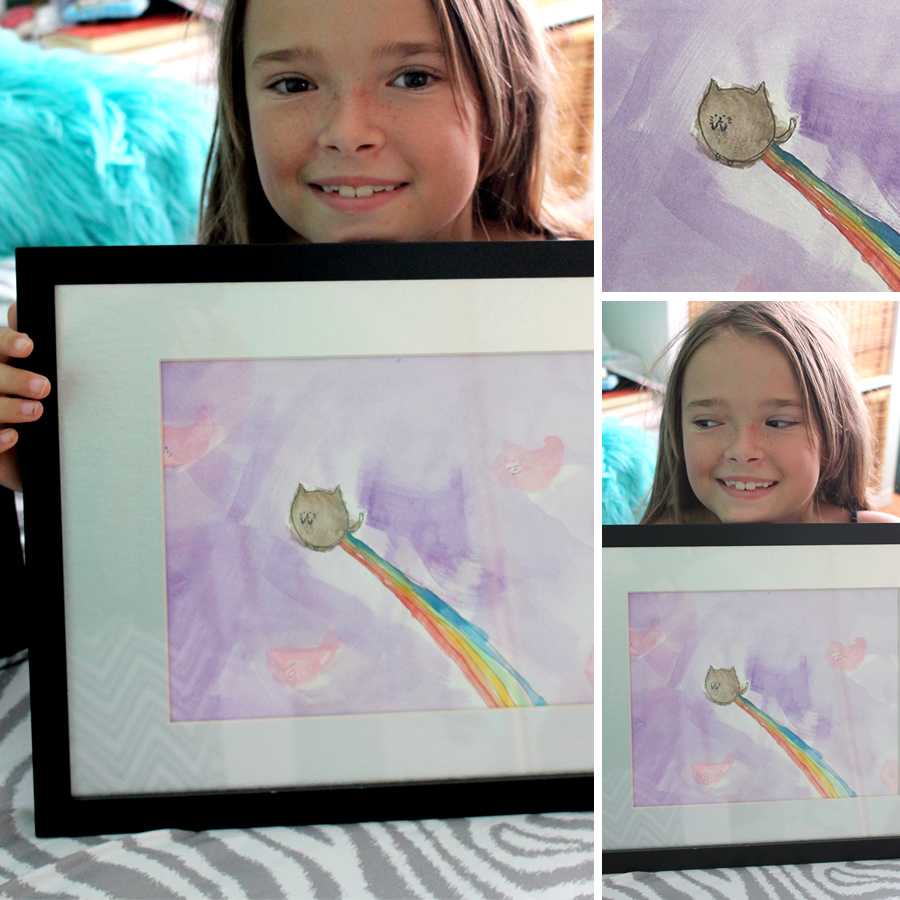 If anyone desires such lovely art for their home I will have it printed on cardstock and have it signed and numbered by Bug herself. I figure she can pay for her Shopkins this way.

Coming next: Corners of my house! I’ve been taking all kinds of pictures and I can’t wait to share.