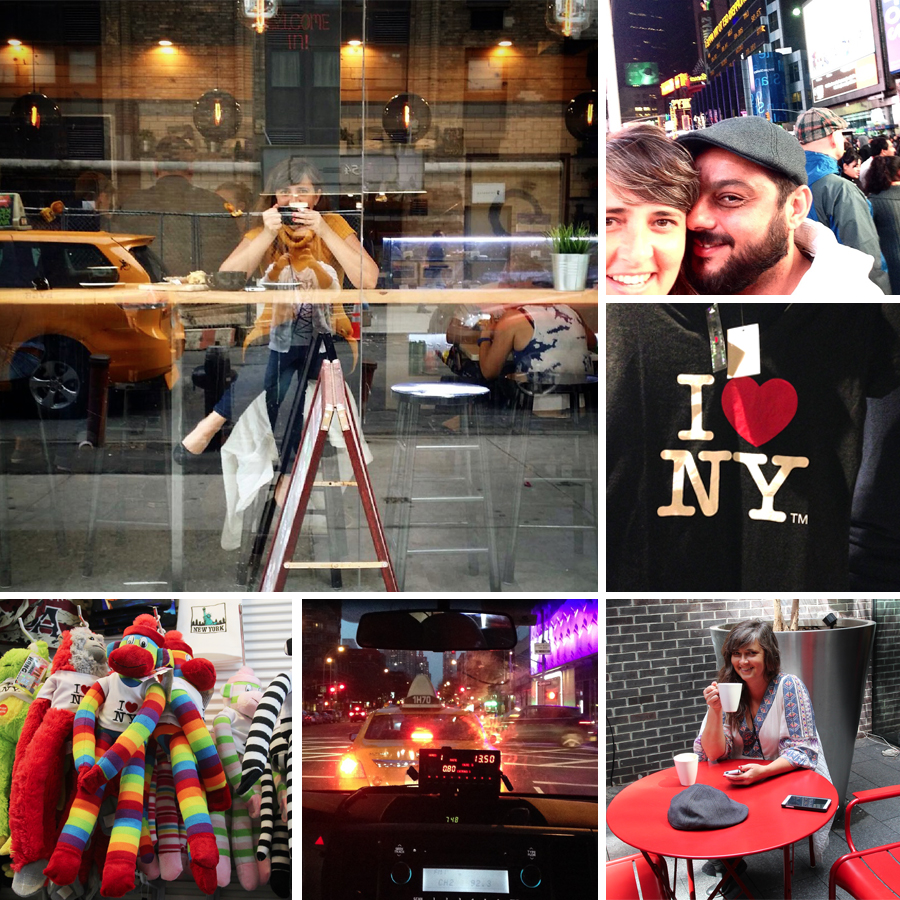 I had so much fun in New York and I took a ton of photos, of course. How could I not?  Too many to cram into one post but I’m going to try anyway. Get your scrolling finger ready.

I have to start out with our hotel, Citizen M, because it is really what I fell in love with first. Payam picked it out based on yelp reviews and I have to say that yelp reviews have NEVER steered us wrong. It was the coolest hotel ever! It’s a pod hotel and that means that the rooms are really small but you don’t care because it’s such a cool, cozy space and there is a giant window looking out onto the city. You don’t feel claustrophobic at all.  It’s pretty much a window, a giant bed, a small glass shower unit that curves on your left and a tiny little motorhome-eque sink on the right and then the door out. Of course everything is white and modern and hip.  And then to top all that off, everything is interactive too. You can change your lighting to any color you like. They have settings like, romantic, business and some others that I don’t remember, disco maybe? Of course I kept it on romantic all the time. Flattering light, duh! But it was super fun to swirl a little dial on the handheld tablet and make the shower blue or purple etc etc… And then you could also watch tv or pick from about 50 channels of Dutch house music to listen to. 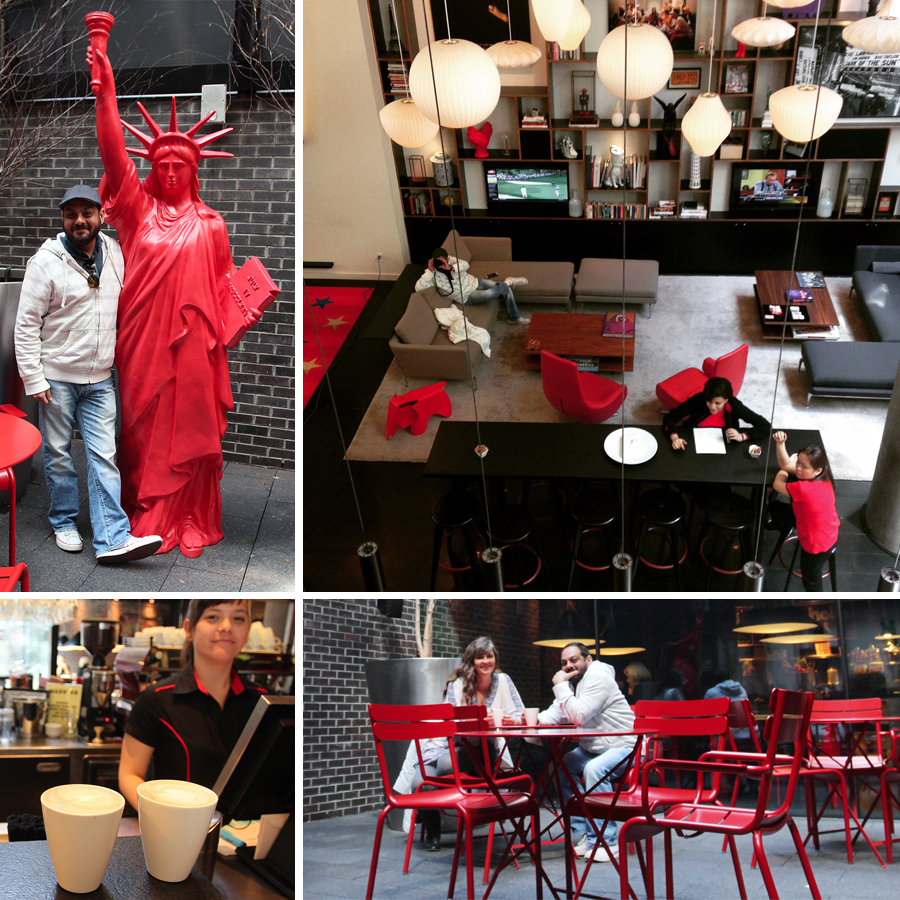 But the real secret to pod hotels is that you don’t spend that much time in your pod. The central space downstairs is so fun you’d rather be down there. They have little nooks and libraries, couches everywhere, a bar, several patios and of course the roof! It was just all-around fun. I could have spent the entire two days inside the hotel and left happy.

One night we went downstairs to the bar to have a drink and we ended up having several rounds of shots with the funniest New Yorker named Courtney (pictured top left). She was so cool. She is a manager at a restaurant near by.  She gave us all kinds of tips on what to see and even some drink recipes to try later.  She made the bartender hunt us down some orange peels because she INSISTED that the kind of tequila we were drinking was better that way. I always thought New Yorkers were rude but it is NOT the case. I met friendly person after friendly person. Everyone was nice! We even hung out with the manager of our hotel for nearly an hour just talking. It’s bizarrely wonderful.

Of course I happen to have the nicest boyfriend on the planet who strikes up conversations with everyone. He’s so cool like that. When we first arrived we right away hit Times Square and ended up getting a kabob for dinner from a street cart vendor. Guess who’s chatting away with the guy on the corner who was heckling and making fun of every other tourist who bought a kabob from him? My guy. Yeah. He just fits right in. So that’s kind of nice.

And speaking of friendly New Yorkers, I had to meet up with Isabel, my boss at AlphaMom who is probably the nicest boss I have ever had. Seriously. I had to have her meet me in the hotel lobby because even though New York is supposedly the easiest place to navigate, I was hopelessly lost all the time. Yes, everything is a grid and it’s all numbers but I’m terrible with numbers and the blocks are really long going one way and short the other. Half the time I just didn’t know which end of the block I was on. I’m sure if I was there a few more days I would get it. 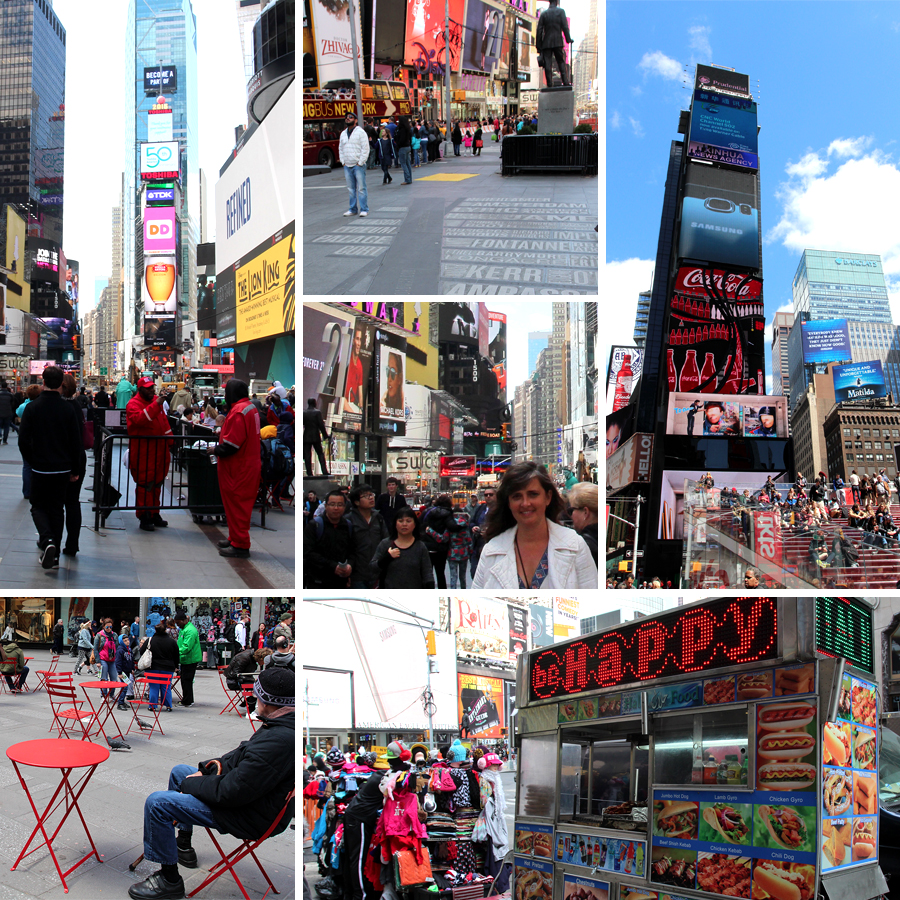 Here is Times Square. It’s closed off to traffic these days so it’s become a GIANT mob of tourists. I guess it always was but at least now it’s safer.  There are chairs set up everywhere so you can sit and take it all in. Or stand around like an idiot gawking with your phone in the air, which is what everyone is doing. The lights are so bright, it’s like daytime. It’s all very overwhelming because everything is moving and blinking and honking and there are people everywhere.

I heard from every local I talked to that it is extremely annoying to try to get across Times Square because tourists are constantly stopping in your way to gawk and take pictures. There were some girls ahead of us who were taking selfies in the middle of the street and a taxi came barreling down the street right at them, blaring the horn. I laughed at their stupidity and then proceeded to do the exact same thing. I don’t know where my brain went. I think I just turned into a lemming and had an overwhelming need to share my experience with all my friends on instagram. So if you saw that movie and you heard the honking you know what happened. I blame it on over-stimulation. 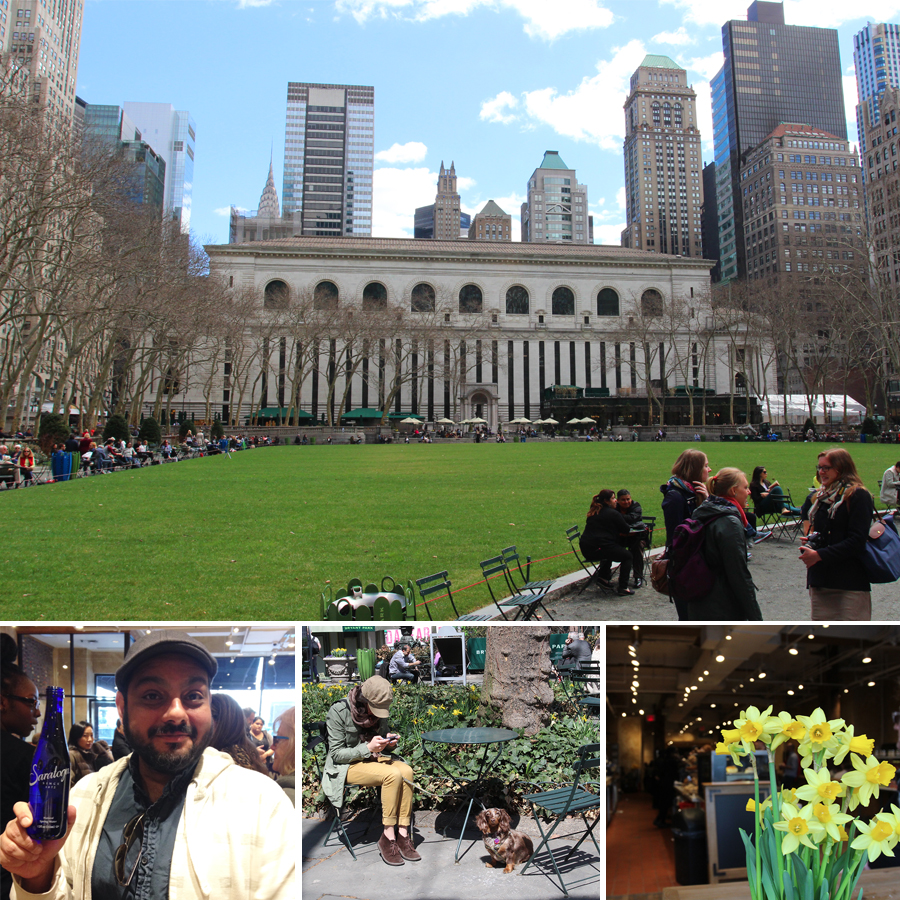 The next day we went walking to find breakfast. Actually, I have no idea which day was which. I’m just going to post pictures and not worry about chronological order because we woke up at 1pm and pretty much did everything out of order anyway. Somehow we ended up at Bryant Park for breakfast. I’m sure it’s not the most famous of parks to visit but we had a very loosy-goosy plan for our tourism anyway. We just kind of flew by the seat of our pants, which is just the way I like it.

Bryant Park was lovely. So much like Paris. Trees and grass, little tables and chairs and a fountain. They even had reading library for kids and jugglers that were giving free lessons to the public. You could play bocci ball and ping pong. I don’t know what New Yorkers pay in taxes but they sure do have a lot of nice perks. 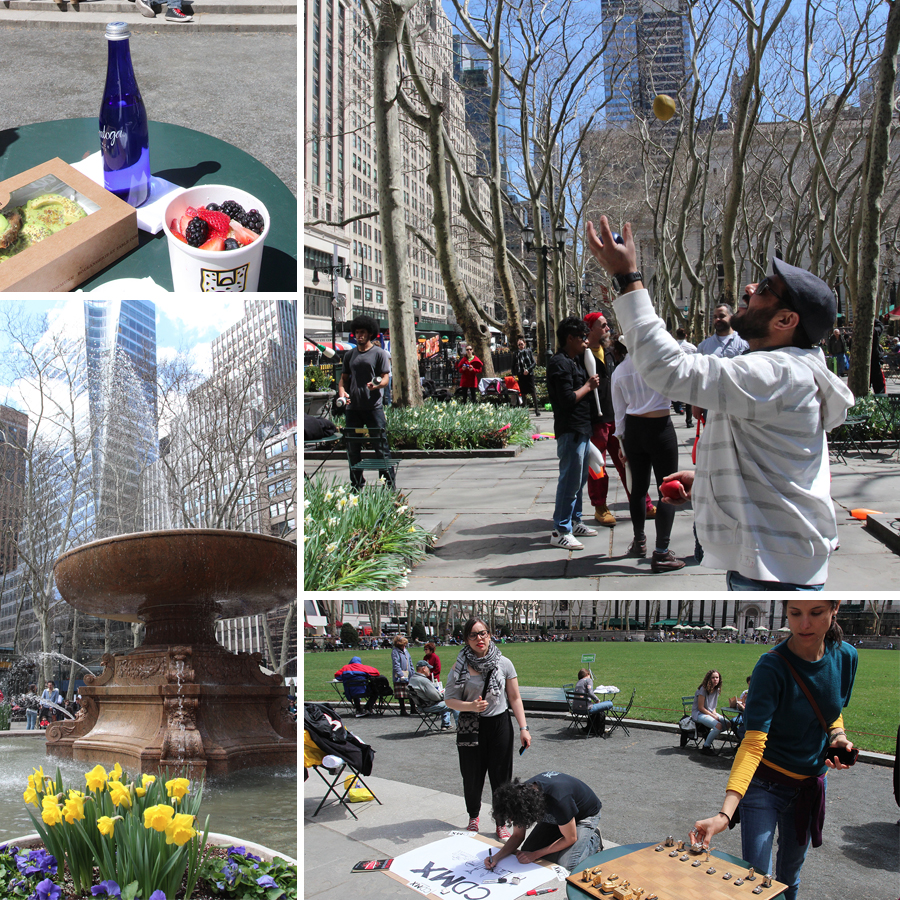 People were everywhere enjoying the beautiful weather. It was supposed to rain that weekend but as you can see it was perfect. I asked for snow, I got sunshine and flowers. I’m not complaining! 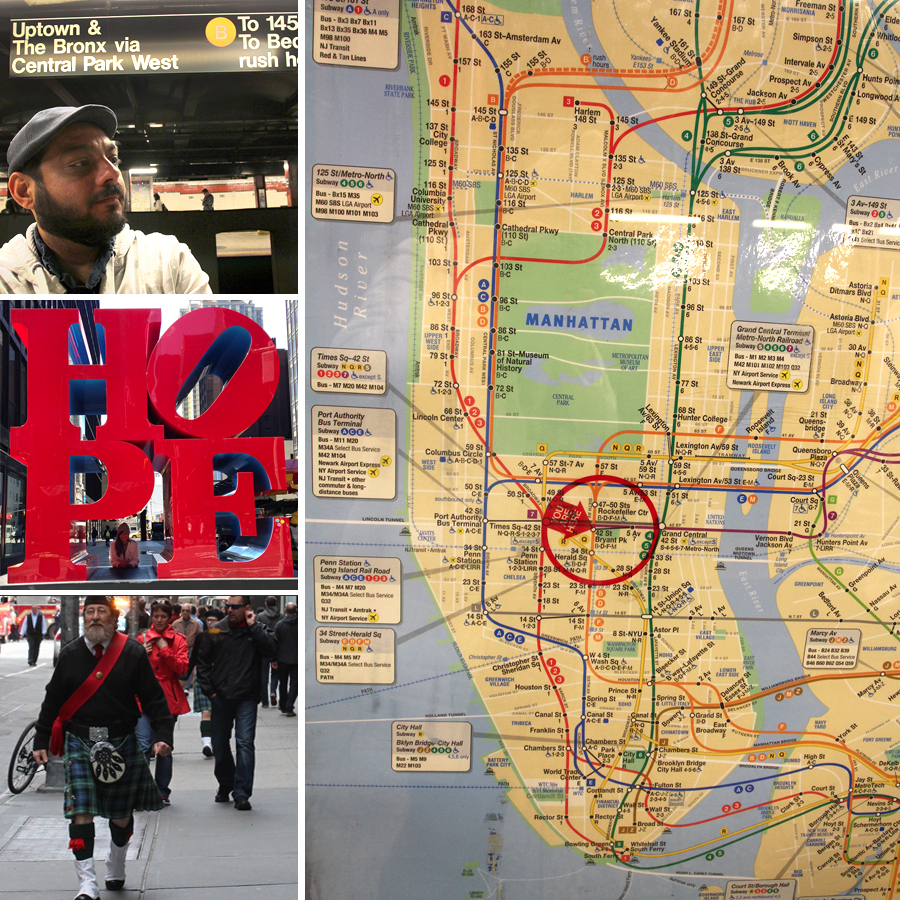 Then we rode the subway to Central Park. The subway was probably the scariest thing I saw in New York. That’s not saying much. I think it was just scary to me because everything was so nice and then we went underground and it was dark and there were pipes with gobs of crud and moldy residue all over them. I was kind of worried that something might leak on me. But of course that didn’t happen. 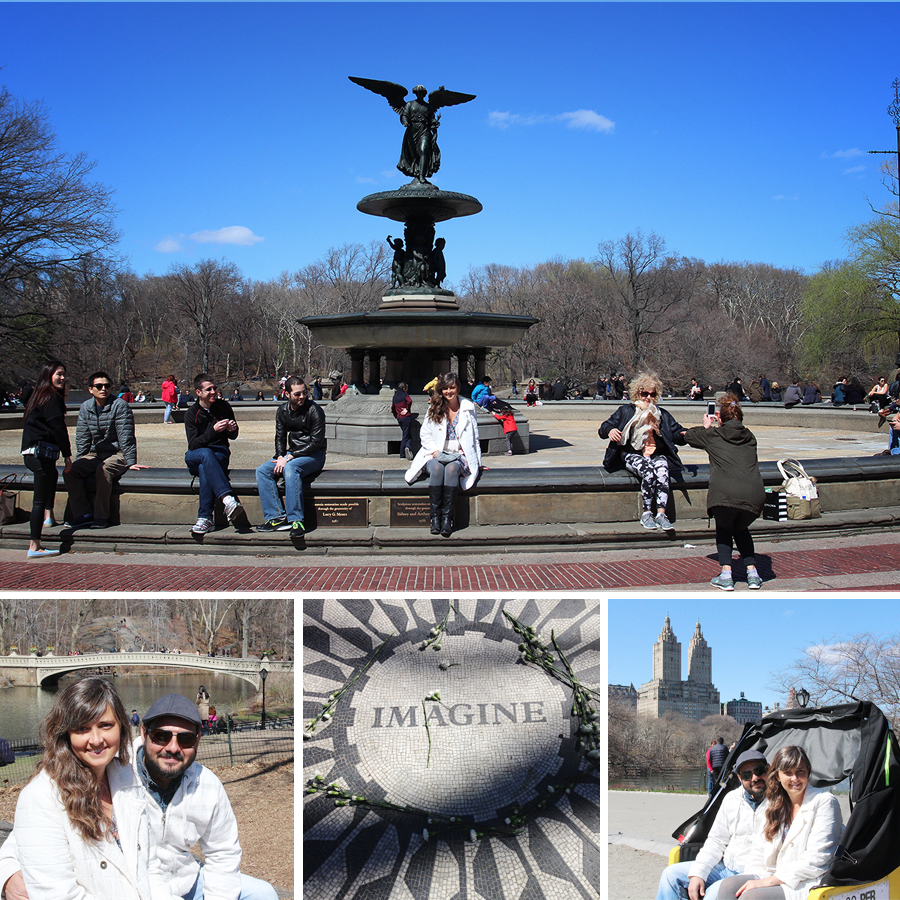 Payam sprung for what seemed at the time like an expensive pedicab tour of Central park but it turned out to be the nicest thing ever. Our tour guide was very knowledgeable and friendly (it’s a NY theme). It was downright pleasant to ride along in the sunshine with a breeze in your hair and hear little bits of trivia about the park. We learned all about the celebrities who live around the park and about the buildings too.  For example on that building behind me in the lower right photo, one tower is thick and the other is thin. It’s kind of strange and you don’t really notice it at first glance. It was built that way because during the depression they couldn’t afford to finish it in the fashion that they started. He had all kinds of stories like that. Some of them may have been made up but it didn’t matter because it was very entertaining. 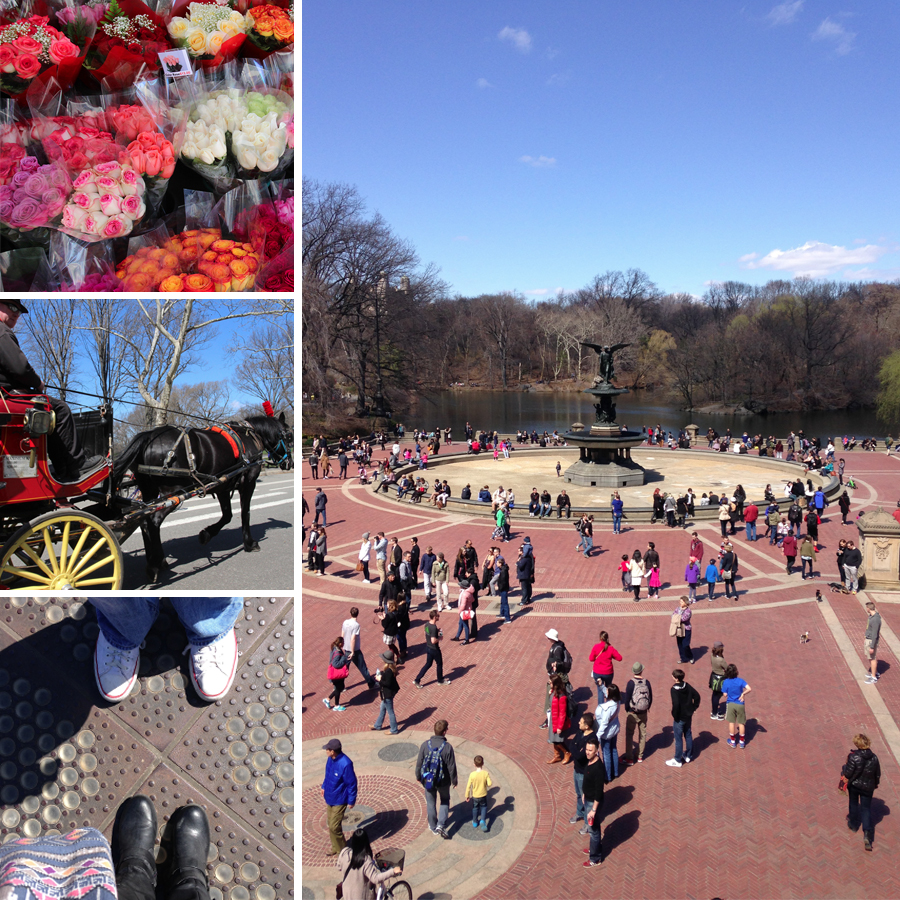 We visited the center of the park which is also the very center of Manhattan. We took some pictures of the “Friends” fountain that is not actually the Friends fountain at all because the one in the tv show is a fake one built in Hollywood. We watched some street performers and random people learning how to dance. I just loved it all. 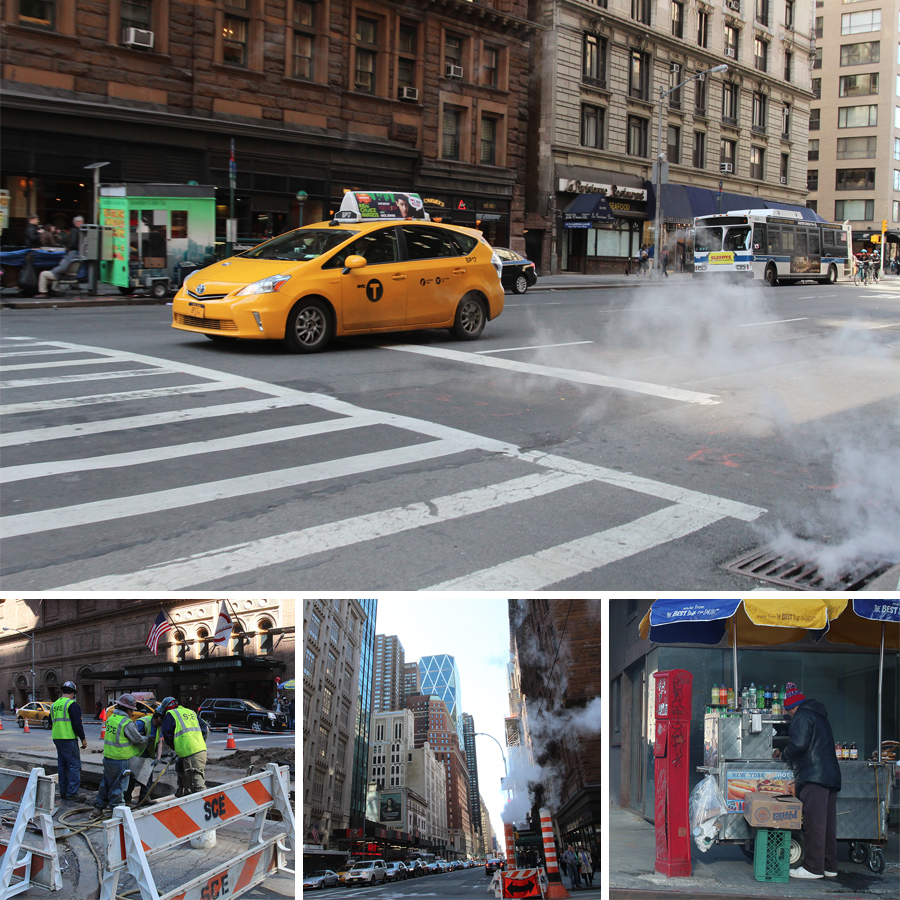 Then it was back to the gritty city. Yes, New York smells like trash cans and stinky bars but you know what? It’s a big city. That’s how it is. And what is neat about so many people cram-packed into such a small space is the diversity of restaurants! Every single restaurant is a mom and pop and they are sooooo good. No boring chains like we have in California. You can walk a block in any direction and end up in an interesting dining experience like no other.

One night we had Dim Sum, another we had nachos in a Victorian bar called Lillies.. the waitresses were so nice and funny, well maybe that’s just Payam and his charm. But I just had a wonderful experience everywhere I went! 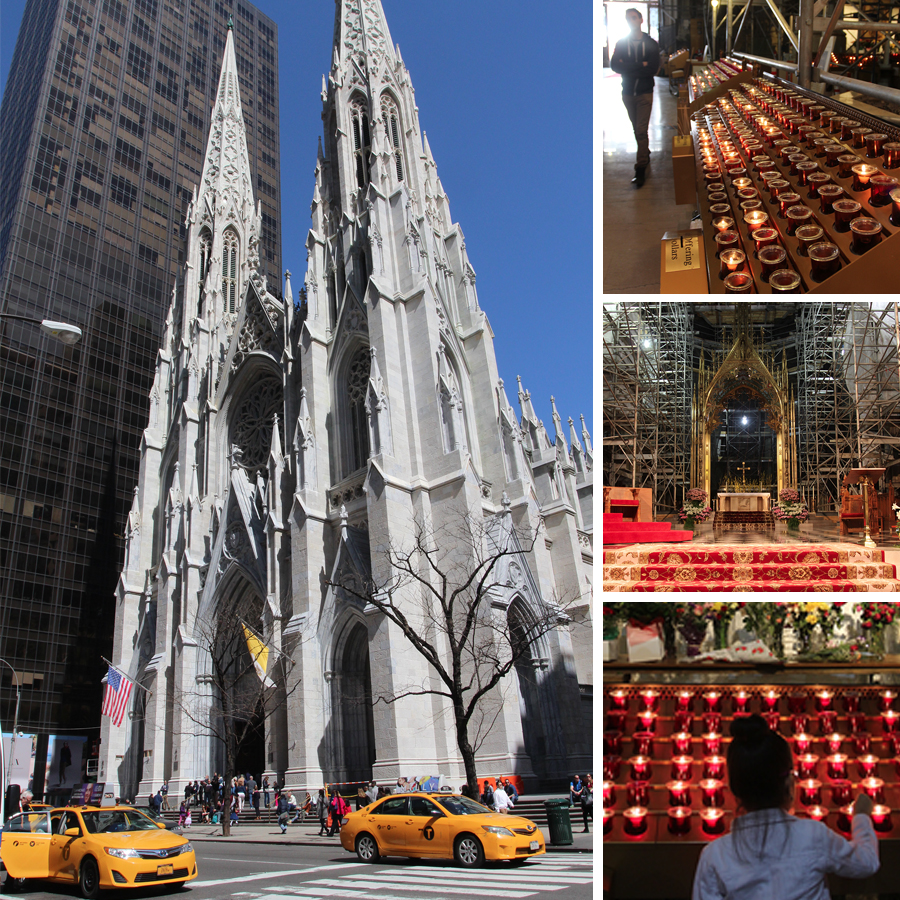 Oh yeah, here’s a church we visited. I don’t remember which one. St. Michaels? St. Andrews? It was under construction but very beautiful in spite of all the scaffolding. 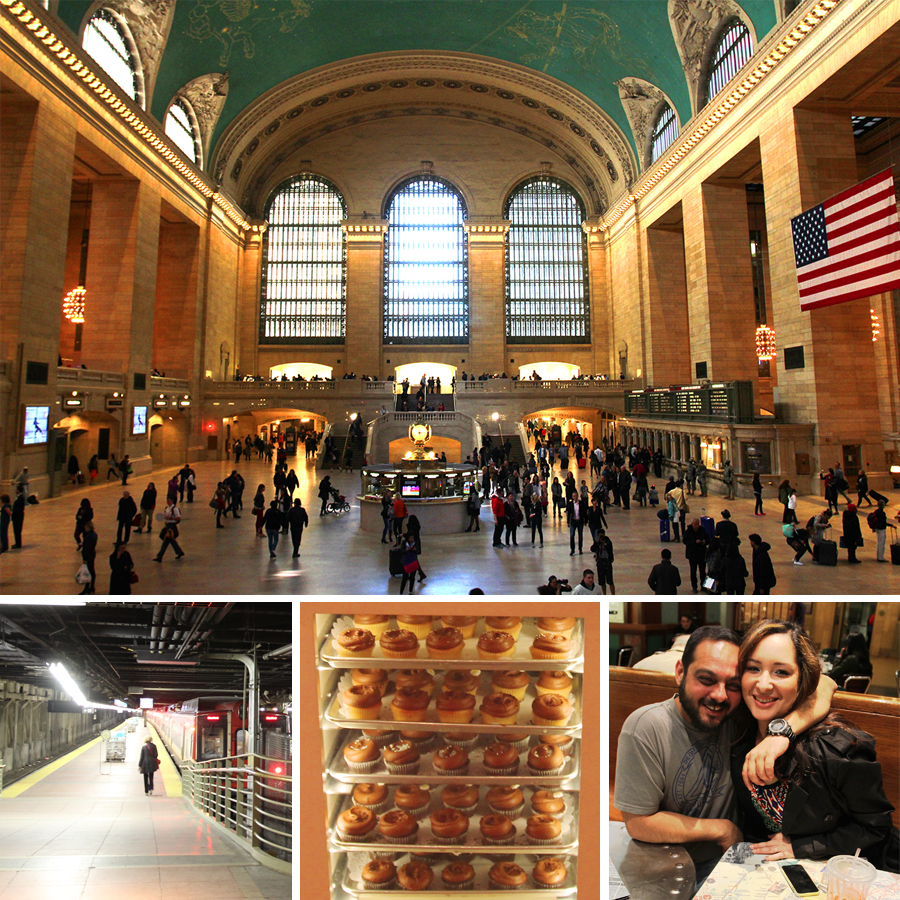 We also visited Grand Central station and met up with Payam’s cousin for a quick bite.  There’s a whole elaborate mall under Grand Central station with trendy shops, bakeries and even a farmers market. It’s New York, they’ve got it all. You just have to pay top dollar for everything. And I mean TOP dollar. I thought we had it bad in California but we are cheap compared to New York. We couldn’t even buy two lattes and a pastry for under twenty bucks. Cha-ching! 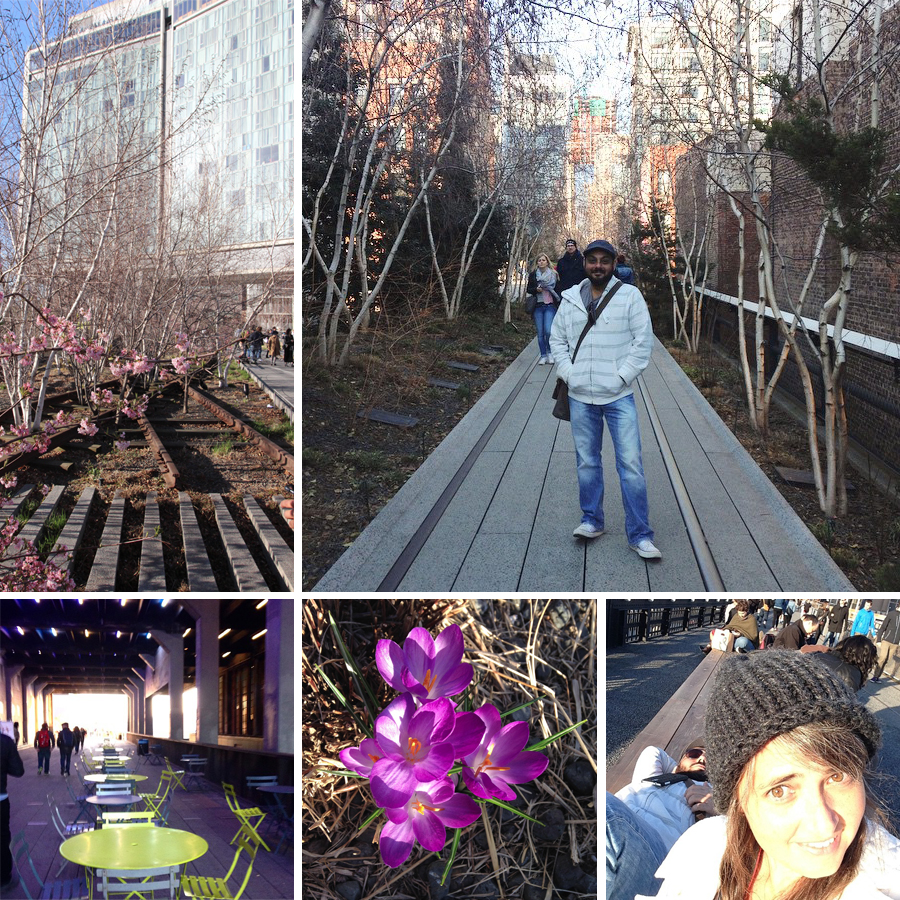 One of my favorite things that we did was walk The High Line. It’s a 1.45 mile walk on this up-in-the-air boardwalk that’s between the street level and the sky scrapers. So you have great views of the city and you don’t have worry about getting run over by horn-blaring taxies. 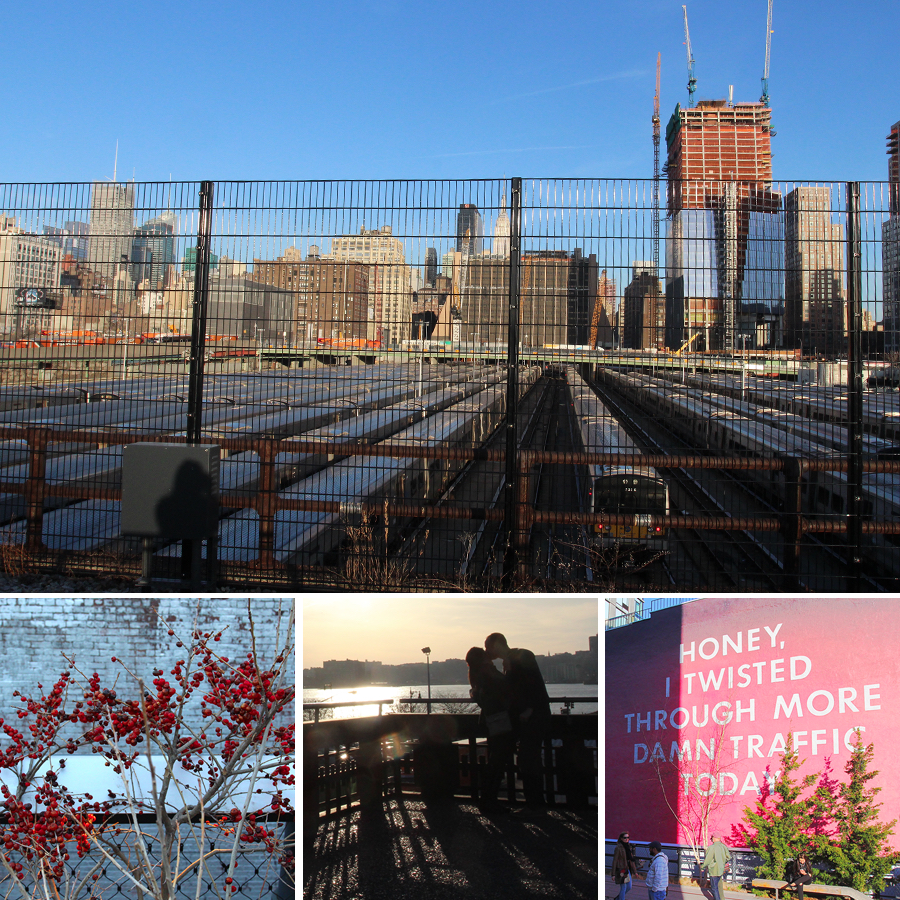 It used to be a railway that brought meat from the meat-packing district to the rest of the city but they remodeled it into a public walkway. There are all kinds of art installations and pretty things to look at like crocuses pushing their way up through the ground between the old railroad tracks and flowering cherry trees being pretty like they tend to be. Spring was just starting to show but I’m sure it’s blasting with beauty by now. I thoroughly enjoyed the exercise and the fact that it was free! 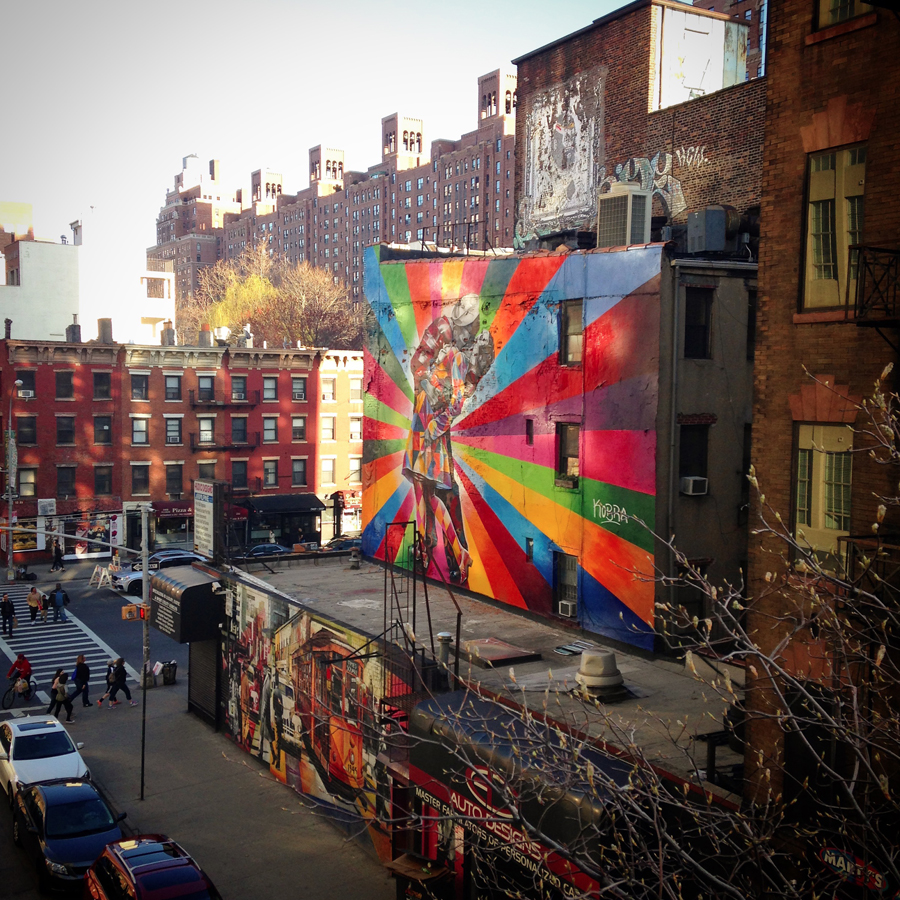 There were so many photos to take, which made me very happy. 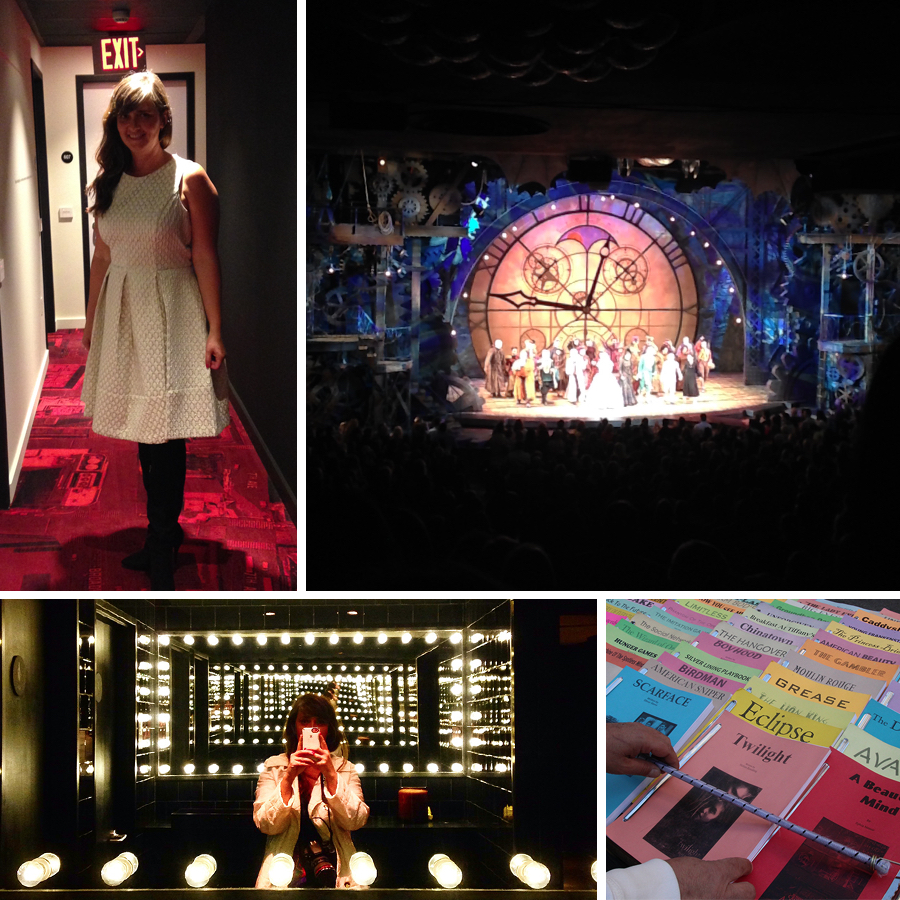 And THEN as if we weren’t having enough fun, we squeezed in a Broadway show!  Actually Payam bought tickets before we even left California. That was a big part of his surprise for me. (Yes, I am sooooo spoiled rotten. That is the other theme of this post.) We wanted to go see Phantom of the Opera but tickets were pretty steep so instead went to go see Wicked, the musical which I really liked. It’s a great story. Makes me want to invent my own prequel.  I’d never been to a Broadway show (obviously) and it blew me away. We dressed up fancy and walked across the street from our hotel.  That part is kind of funny but fun nonetheless because I never get to dress up!  We didn’t even know that Wicked was playing across the street. It was a total coincidence and convenient! 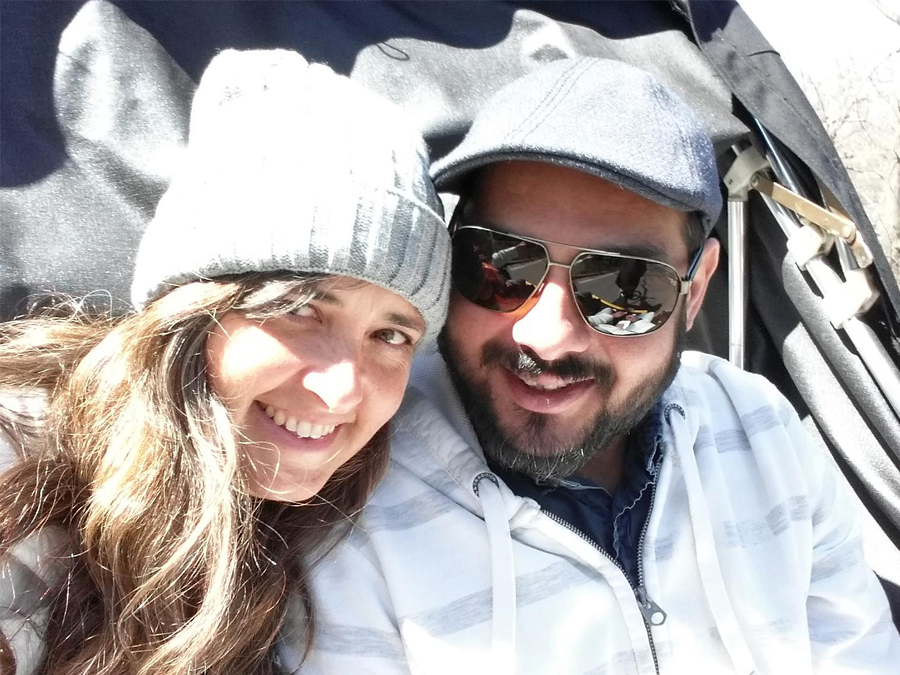 So in conclusion: I love New York and Payam is a keeper.