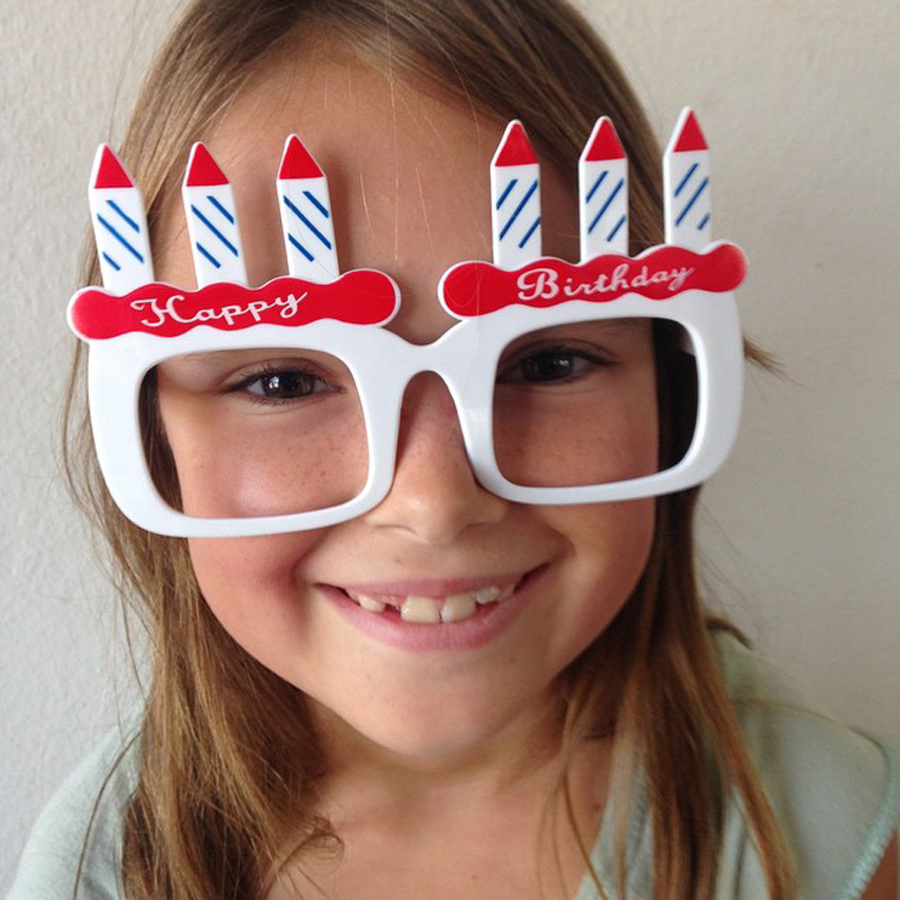 I have to say that this 9th-Birthday Skating Party had the least fails (aka failures) of all the parties I have ever thrown. Maybe I’m learning a thing or two after all these years.  Most of this could be chalked up to the venue being awesome. The skating rink we picked is so laid back. All they really cared about was kids having fun. Which is how it should be!  There were no rules about much at all.

The other skating rink I checked out had rules about everything! A guest limit, adults couldn’t sit, you couldn’t bring in your own food, a short time limit etc etc… Whereas this rink was open to just about everything. We could walk on the rink and take photos (usually cameras and phones are not allowed, let alone people with shoes on instead of skates…), people could come and go, putting on skates, taking them off. There was no hard and fast rule about who was skating. In fact, I don’t even think they charged me for everyone who skated.  Parents skated, kids skated. It was great!

It was super laid back and cool. And that’s what I really need when it comes to party planning. 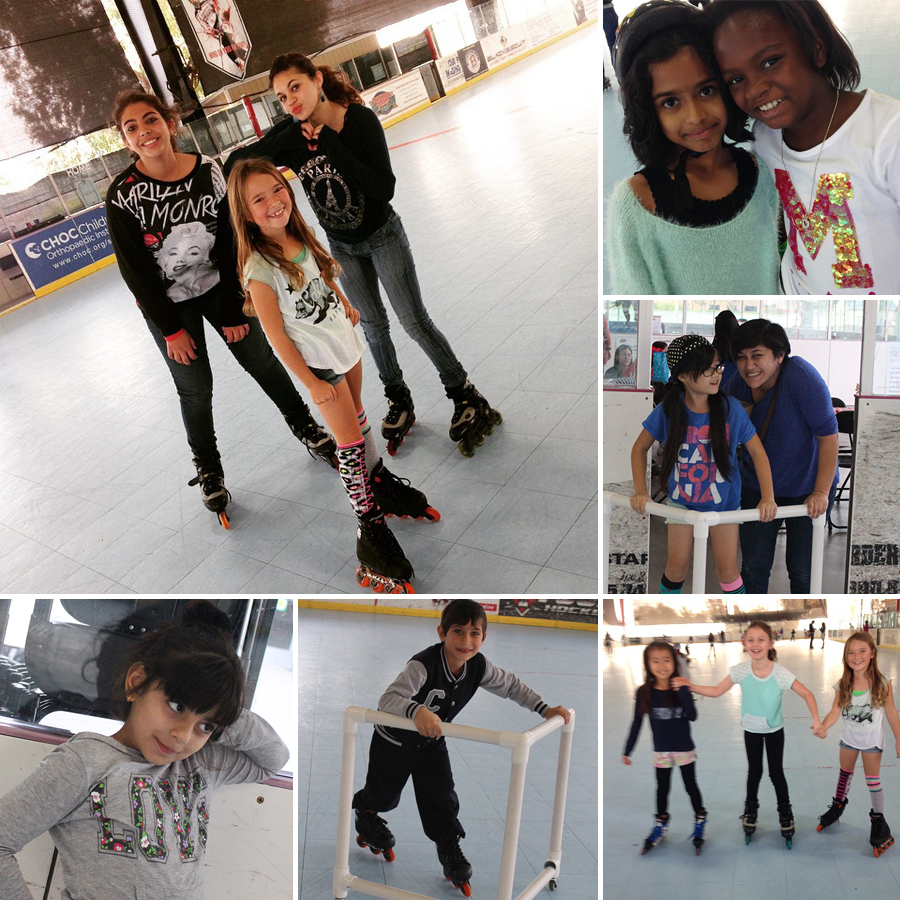 I’ve never wanted to have parties at venues like this before because I really love to decorate and get involved in every bit of the party process and they usually don’t let you. Usually you have to put up with their grocery store decorations and fresh-from-the-freezer pizza… You know me, I like to graphic-designer-it-up at every chance I get.

I still couldn’t decorate much, no disco ball, no glow-in-the-dark bracelets (it’s a well-lit outdoor rink), no crazy color-coded snacks or serve-yourself candy bar, I didn’t get to make a special birthday playlist of music… you know, all the things I normally do that are OVER-THE-TOP and RIDICULOUS.

It was good for me to not be ridiculous for a change.

I think that is where I go wrong on a lot of parties. I try to do too much and I lose sight of what’s important: that kids have fun.

That didn’t go wrong on this party. Everyone had fun. A LOT of fun. So much fun that they’ll be talking about it for days…I think this party has spawned a whole new crop of skaters and that is just all sorts of awesome. Not a bad business move on the part of the skating rink either. 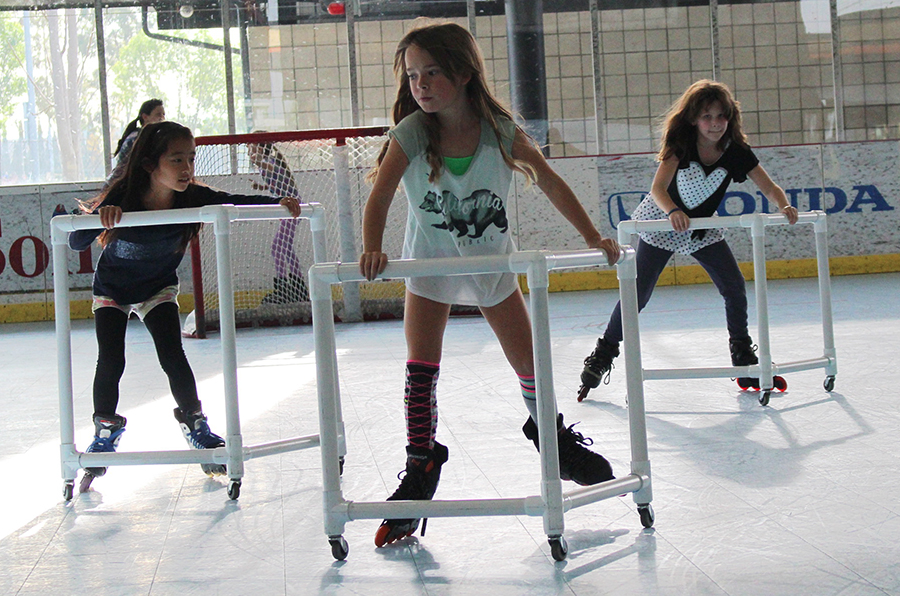 There were some mean, lean, skating machines out there. I was so proud of Bug. I’m glad we put the time in ahead of time because she really knew what she was doing and taught all her friends how to skate too. There were a few kids who struggled and one girl actually cried and said skating was boring and she wanted to go home but her mom made her stick it out (great mom) and by the end of the party she was probably one of the most enthusiastic skaters out there. It just goes to show you that that you love what you suffer for. And maybe that is why skating is so fun!

It’s not easy when you start out. There was a lot of falling. So many kids just threw themselves down at the floor like they were made of rubber. 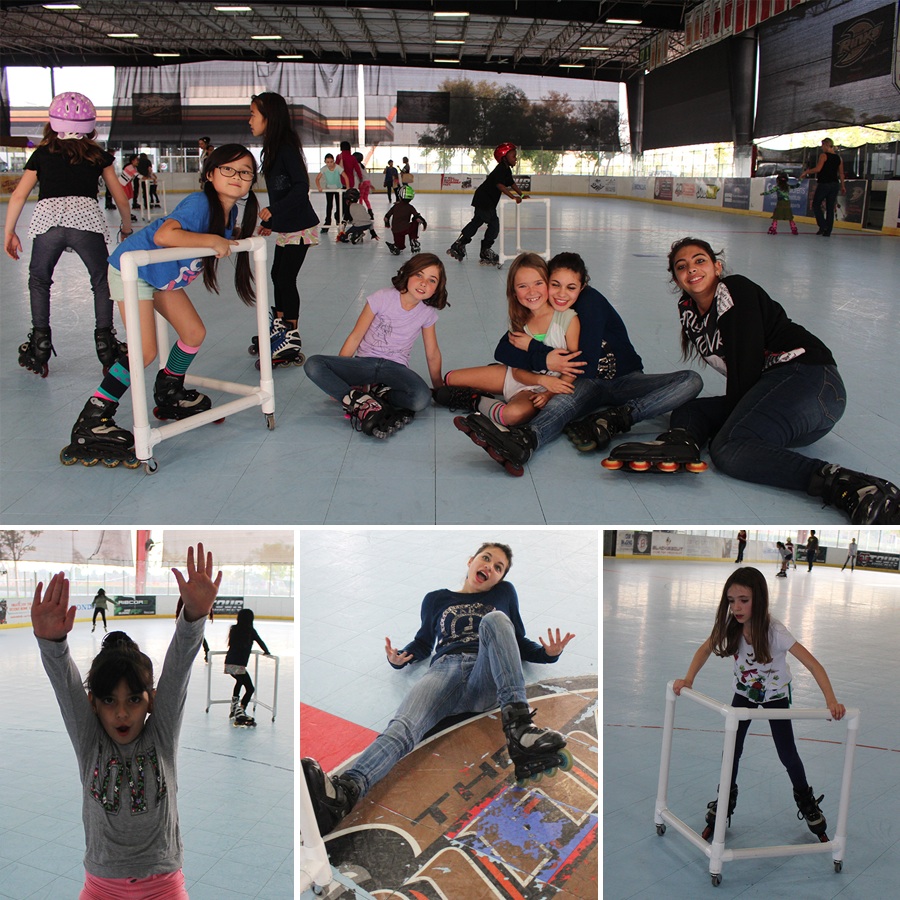 Our neighbor, Lubna, was the queen of the floor.  She took big risks (skating on one foot, acting fancy…) and ate it regularly. It was great. 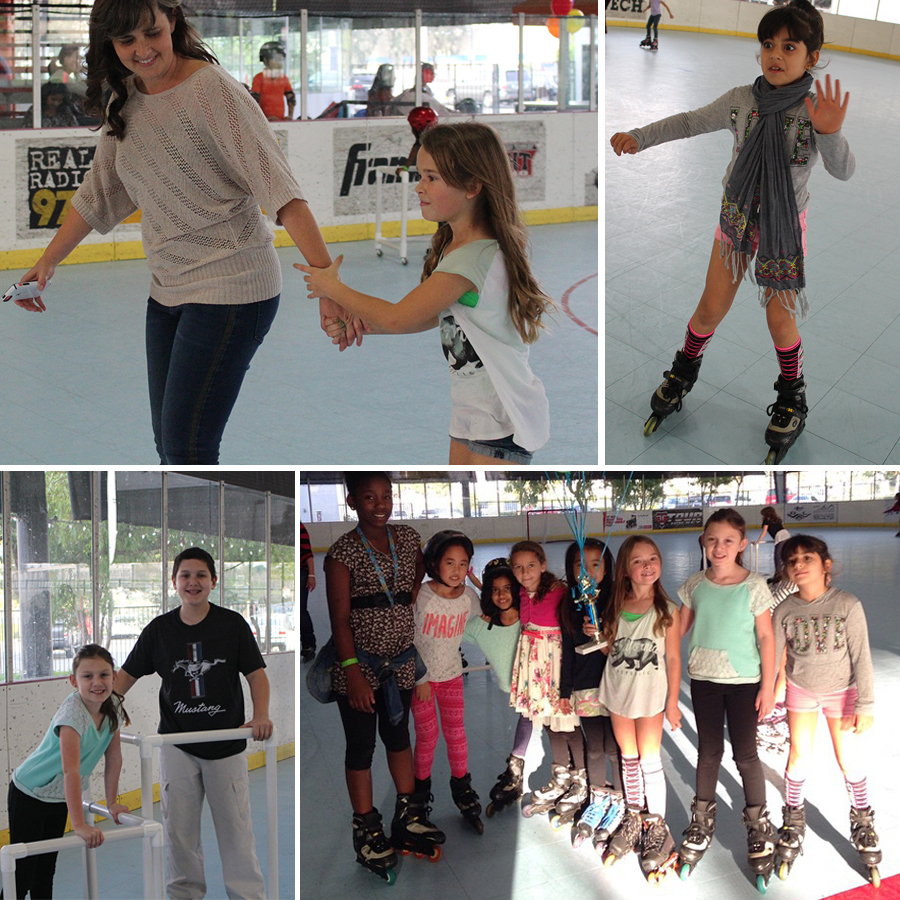 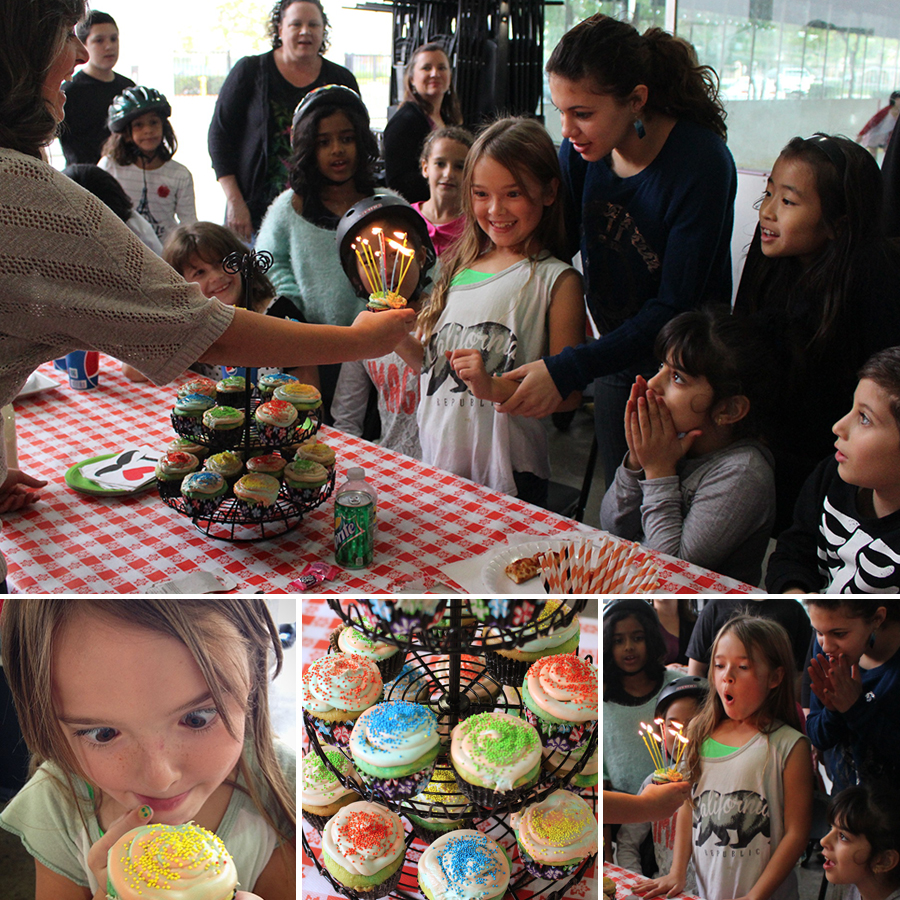 Then we had cupcakes. Bug’s special cupcakes that she orchestrated the color on. 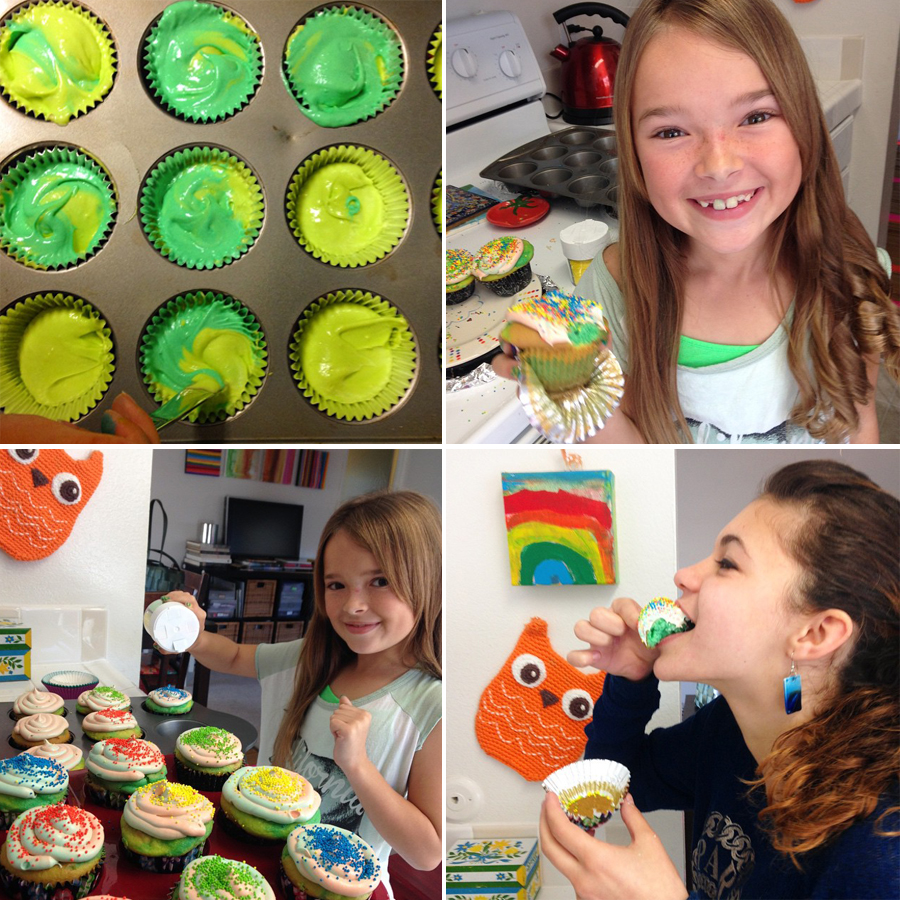 Here are some pictures of the cupcakes from Saturday when we made them so you can appreciate her coloring skillz. That girl, she is such a fanatic about color.

So that’s that! What a great happy birthday party for a nine-year-old girl. I’d recommend this theme/venue/color scheme any day! It was a lot of fun!