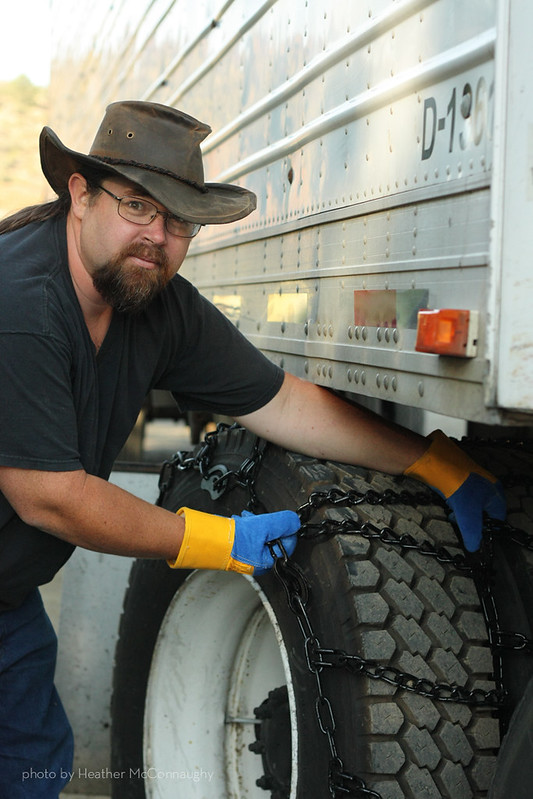 Hi All! I thought while I was busy fixing up the calendar (Thank you, by the way. So many typos!) I figured I’d put up a guest post from my Dad. It’s something he’s been working on for a while and now that it looks like his trucking career might be over, he’s even more interested in developing. Before he came down with the blood clot, he started a little side business selling gloves. This post is all about that. The gloves are so great, they practically sell themselves so this is not a hardcore sales pitch from anybody. If you’re looking for some heavy duty water proof gloves for somebody in your family who might have to deal with weather, then you might want to order a pair for Christmas. Otherwise enjoy my Dad’s lengthy post. I love you, Dad.

The above photo is my brother, by the way, modeling my dad’s gloves. Whit Woooo! Lookin’ good Cupcake! 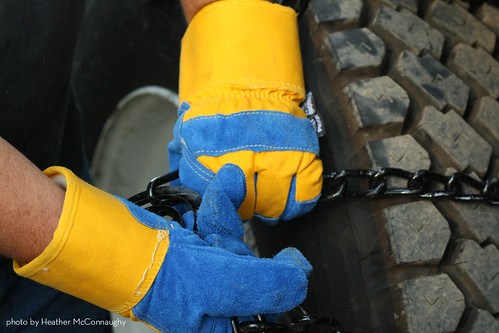 I have been driving OTR (over-the-road) for about 17 years now, and was expecting to be driving until I was at least 66 and would be able to retire. However, in August I tore my rotator cuff while climbing into my truck and have been home waiting for surgery. With time on my hands I pursued other interests.

A few years ago I stopped at a small truck stop in Weed, California for a short break. As I made my way across the convenience store towards the men’s room, I saw a wheelbarrow full of gloves with a sign above them that said “Waterproof Gloves”. A few minutes later I found myself back at the wheelbarrow checking out these “Waterproof Gloves”. The first thing I noticed was that they were made of leather. I had never seen a waterproof leather glove before. In fact, I was skeptical that a leather glove could be waterproof. I picked up a pair and stuck my hand inside, and thought to myself, “OOOHHH, these gloves feel good!!” But how can they be waterproof?? I read the label and discovered that between the outer heavy duty leather and the soft Thinsulate lining, was a rubber bladder that prevents water from penetrating them, but I was still skeptical. “How will they hold up?”, I wondered. They felt good on the inside and appeared to be heavy duty on the outside. The only thing I could do to find out if they were truly waterproof, was to buy a pair, so I did.

The next day as I was driving over Donner Pass (which is at an elevation of about 8,000 ft.) down into Reno, Nevada it was snowing quite hard. I saw the highway sign, “chains required 5 miles ahead”. (Most cars are front wheel drive and chains are only put on the two front tires and away they go. It’s not the same for a big truck.) Usually, there is a highway sign telling us whether there are “Minimum Requirements”, which means we have to chain up one drive tire on each side of the truck and two of the trailer tires to keep the trailer from sliding. Or the sign says “Maximum Requirements”, which means all eight drive tires and two trailer tires must have chains. Normally at this point a truck driver says to himself, “Oh no, I should have stayed at the truck stop”. I was about to say that myself when I remembered the gloves I had bought the day before. It was the perfect opportunity to try them out.

Sure enough, the sign said “Maximum Requirements.” I was going to be out in the cold for at least an hour or so. I put on my new gloves and started working on installing ten chains, not an easy job. About half way through, I found my hands were still dry, and relatively warm. “These gloves are great,” I said to myself, “I wonder how my hands will feel when I am through?” When I finished installing the chains I was cold and glad to get back into my warm cab, but my hands were doing just fine! I was really impressed.

I thought the gloves would last me three winters, but I never got to find out. During their second winter of use I left them sitting on my fuel tanks and drove away. I went through Weed, California a few weeks later and went into the same store to buy myself another pair of gloves, but there was no wheelbarrow full of waterproof gloves. I went to the glove section, hoping there would be some there. No such luck. There were no waterproof gloves at all! I went to the counter and asked the clerk, “Where are the waterproof gloves you had for sale?” The clerk, which happened to be the owner of the truck stop, said to me, “a salesman sold me those gloves and I have never seen him again.” I said, “wow, I really need a pair of those gloves, they were the best winter gloves I have ever used.” He said, “I am sorry, I can’t help you.”

I thought there must be another truck stop that carried these gloves and since I travel the entire 48 states I was sure I could find a pair somewhere. For the next 6 months I was on a mission. I stopped at every truck stop I could, and scoured the glove section, hoping to find a waterproof leather glove waiting for me on one of the hooks. Truck stop after truck stop I was disappointed. There were no waterproof leather gloves anywhere! I was starting to get concerned, winter was coming and I couldn’t find the gloves I had come to rely on the previous two winters. I started googling “waterproof winter gloves” but I wasn’t interested in the ski gloves the search would respond with. Ski gloves would never hold up to the rigors of hanging chains on a truck. I did find some leather insulated gloves, but none of them were waterproof.

As I dug through page after page of the Google search I finally saw a company name and logo that looked familiar, Palm Flex Gloves. I vaguely remembered the name and wondered if they were the company that manufactured the waterproof gloves I bought over two years ago. I called and asked if they had waterproof leather insulated gloves. The lady on the other end of the line said, “we used to, but we don’t carry them any more.” Apparently, nobody at Palm Flex ever drove a big truck! I asked her if she could tell me who made the waterproof gloves? I really needed a pair! All she could do was give me the phone number of the salesperson they used to buy from. I thanked her and called the number she had given me.

A man answered the phone and I asked him if his company made waterproof leather insulated gloves. He said, “you mean the gloves with the blue leather palms and yellow cuff?” I said “YES!!! That is exactly the glove I am looking for!” I explained that I was a truck driver who had come across the gloves two years earlier and I was desperate to find another pair!!

He told me that they hadn’t pursued the trucking industry with their gloves but could see how a driver could use the gloves. They catered to highway construction workers, fire departments and various safety departments. I asked him how I could get a pair of the gloves. “Well”, he said, “I am not sure. Let me give you the phone number of my boss in Washington, see if he can help you.” I called his boss in Washington and went through the routine one more time. He told me the same thing as the previous salesman, they weren’t interested in selling to the trucking industry. But if I had a resale license and became an approved, registered distributor they would be happy to sell them to me wholesale by the dozen, and oh, by the way, we have a two dozen minimum in order to ship any order. Hmmm…now what was I going to do?

It took awhile for me to decide that I really wanted to go into the glove business. After all, I was just a truck driver, not an entrepreneur!! But how was I going to get a pair of those gloves???

I consulted my wife, she wasn’t too excited about starting a shoe-string business, but gave me the go-ahead. I went to the county office where resale licenses are issued and turned in an application. My daughter Brenda jumped on the bandwagon and said, “Dad! You need a website! Hmmm…, how about ‘Tom’s Truck Shop’?”. A few seconds later, she said, “yup! ‘www.tomstruckshop.com’ is available.” So I paid the fee for the domain name, and I was in the glove business.

I ordered two dozen of the waterproof insulated gloves and began asking other drivers if they were interested in these gloves when I was at a truck stop. While fueling up my truck I would talk with the driver in the next stall as they were fueling up their truck. I would ask the driver if they went into the colder parts of the country. (Just about every driver deals with the cold more than they like to admit. You can’t stay in Texas and Florida all winter!) The driver usually says, “Yeah, why?” “Well,” I reply, “check out these waterproof insulated gloves.” I hand them a pair of gloves and encourage the driver to put them on. Most often that is all that is required. The driver studies them for a moment, and while looking at how they are constructed their hands are telling them, “hey these are really nice gloves.” The next thing they say is, “how much are these? I need a pair!!”

That’s how it goes nearly every time. I have had drivers hand me a $20 bill, and as I am fumbling to give them change say, “keep the change, I need these gloves!”

It quickly became evident that I was on to something. Truck drivers need these gloves and they aren’t available anywhere! I stopped in at a busy truck stop in Sacramento, California a few months ago and spoke with the manager. Since this particular truck stop sells sets of chains all winter long the manager thought he might be able to sell the gloves if he displayed them along side the chains. A few weeks later he ordered another eight dozen! They are selling more than a dozen a week and drivers are delighted with them!

I am quite happy with how things have turned out. Remember… I never envisioned being in the glove business, let alone being so successful at it.

Now… there just may be someone reading this blog who has a dad, husband, brother, or co-worker who would really love a pair of these waterproof leather insulated gloves for Christmas. I doubt very many will be able make their loved one hold out until Christmas, especially if there is a storm blowing in and the walkways and driveways will need to be shoveled in the morning. So it’s OK with me if this particular present is opened a little early… it is in the interest of “frostbite prevention” after all.