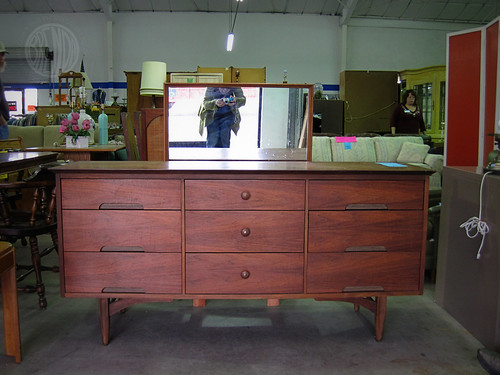 I may have had beginners luck there for a while. I was all geared up to write great posts every Thursday about all the wonderful finds that I found while thrift-store shopping with my mom on Wednesdays. But then yesterday we found NOTHING. Zip. Nada. It was all a dumb waste of time. I’m not giving up yet though! Maybe next week we’ll find something amazing.

So I thought I’d just write about my past finds. That amazing dresser up there I did not buy. It’s 99.99 dollars and I don’t really have a place for it. I think it’s a good deal though, especially since it looks like one of those cool sideboards that are so popular right now. It’s really well made, the drawers slide in and out smoothly and I like how it’s a little on the small side. The finish is a little worn off but I think it would look great oiled up. 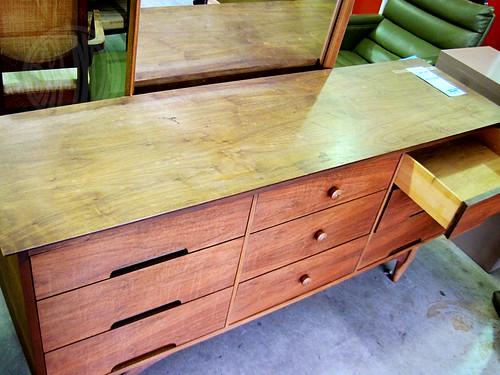 Here’s a close-up. It even comes with a mirror. Inside one of the drawers it says Vega Morris in Walnut. So there you go, it’s walnut. Don’t you just love my educated insights? I know about nothing when it comes to furniture design. But I’m not too proud to learn! If anybody wants it I can give you directions. It’ll probably still be there. It’s been there for two weeks now and nobody has snatched it up. 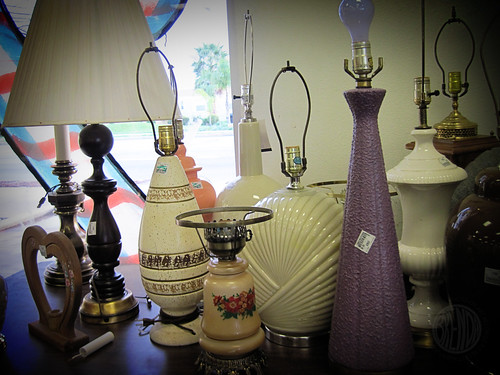 Here are some more things I didn’t buy. They’re all horrible. But don’t they look like a gaggle of old ladies gossiping at church? There are so many cheap lamps at thrift stores. Lots of them are really nice. Of course lots of them are hideous too but I say, if you need a good lamp, they’re worth searching through!

A funny story: My mom had this really cool milk glass lamp. It had been sitting in her pile of junk since forever. I’d mentioned to her casually that we should sell it on etsy but never really got around to cleaning it up or photographing it for her. When I moved in, I asked her about it and she said she gave it away.

I shrugged. It was my own fault for not getting off my butt and fixing it up for her. Then the other day, we were in a thrift store and I found myself admiring a lamp exactly like hers. I showed it to my mom and asked her where hers ended up. My mom examined this lamp closer and said that this lamp was indeed hers. The exact one! I guess the person she gave the lamp to was the thrift store! Hah! What a thoughtful gift, mom! We laughed about it for a while.

But I have to admit, I looked at it and the $2 price tag and I was tempted to buy it again. I probably would have if I had needed a lamp. But I don’t. I have plenty of lamps. 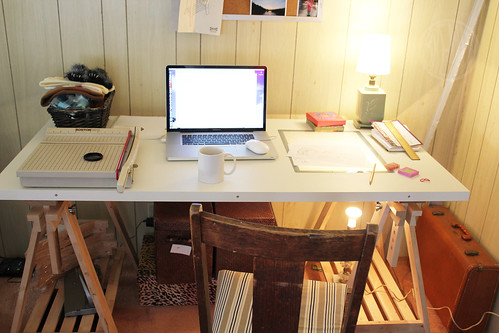 Which brings me to my new craft desk! There are two lamps in this photo, can you spot them? One on top to the right that is green and one underneath to shine through my new light table! No, I didn’t get this desk at a thrift store but I figure I might as well show it to you while I’m talking about lamps. I didn’t even get the lamps at a thrift store. They are hand-me-downs from my mom. My mom is my own personal thrift store except I don’t usually have to buy what I find there. I just take stuff and she’s happy because I dust.

About the craft desk/work table. I used it in it’s full capacity for the first time yesterday! It was so awesome. I had to sketch something up and invariably I make mistakes and need to re-sketch. Now, instead of tracing on my living room window, I can sit comfortably at my desk and trace with my very own light table! I love it. Thank you, kind donation givers. You have made my working day a thousand times better.

I also used it to sew (yes sew!) and assemble Bug’s birthday invitations (more on that to come later), cut paper and organize a bunch of etsy orders I’m helping my dad and neighbor with. I should set up one of those shops where they handle ebay stuff for you and charge a percentage except for etsy instead. I’m the etsy photographing queen of my family.

Boy do I ramble on. I just wanted to say one more thing about the craft desk though.

It’s not finished. The table is not attached to the legs. Why? Because it isn’t manufactured to be attached. Seriously. There was a reason you never see it together on the Ikea website other than a tiny thumbnail. The Vika Blecket drawing table top with the cool light table and little metal edge thing that keeps your pencils from rolling off DOES NOT attach to the Vika Artur trestles that tilt so you can tilt your table top for sketching? So they just put that metal edge thingy on there for looks because it’s made to attach to static pole legs that do not tilt. Non-tilting tables don’t need pencil catchers. Ikea makes no sense sometimes.

Of course it took me four hours of examining the very unhelpful directions, cursing in German and googling to finally come to this conclusion but hey, that’s okay. That’s why they invented Ikea hacks. I’m just waiting for my handy dandy friend the handyman to get back from vacation and screw the thing together for me. Or until I buy my own drill, which I’m very tempted to do! 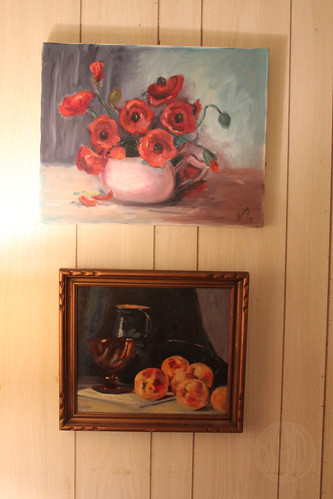 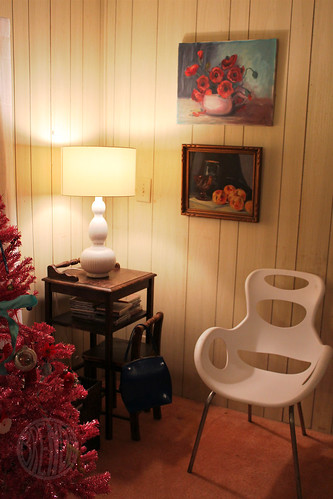 Back to thrifting. As you know, I got these really cool old paintings for about $3 each. I’m on a hunt for old 60’s portraits so I can be like The Brick House. 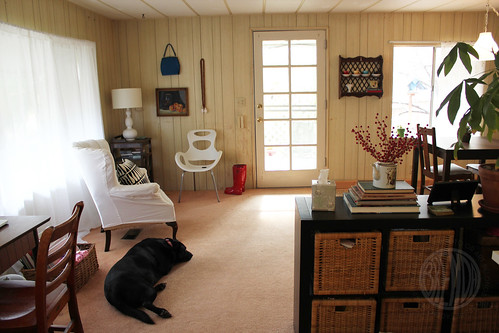 I’ve since moved the paintings around quite a bit. In this picture, I have a blue purse hanging above it 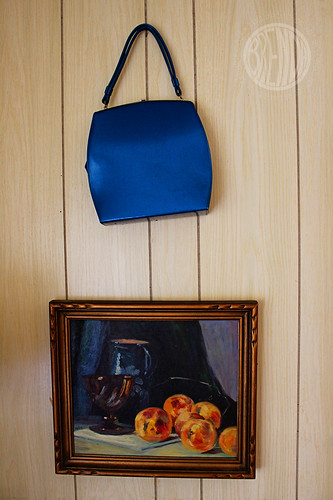 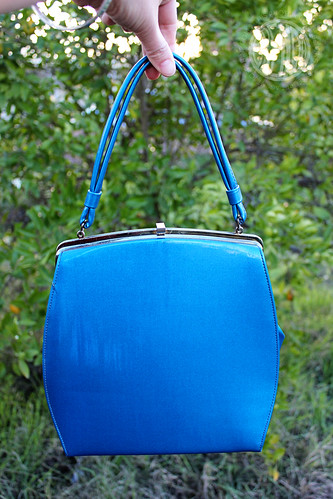 Isn’t it a smart little number? I’m thinking it will look great with a Sunday-go-to-meeting outfit. So prim, proper and bright BLUE! That is when it’s not busy decorating my walls, of course. 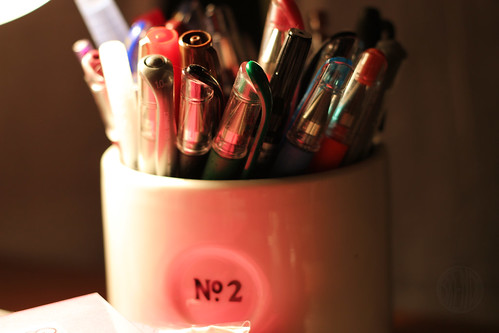 I also want to show you this neat pencil holder. You’ll see it on my desk in other photos I’m sure. It’s so cute. OMSH found it for me when we were shopping for my desk. I’m supposed to fill it with No. 2 pencils but right now it holds all my favorite pens from Tokyo Pen Shop. Yes, that’s a plug there. But they deserve it. Their pens rock! I’m such a fan. If you need a pen, get it there and make sure you get the Unibal Signo .38. That’s what SAJ says. End plug.

I already showed you the funny illustrated fishing guide. So I guess that’s that! Except I do have one other piece of thriftiness! 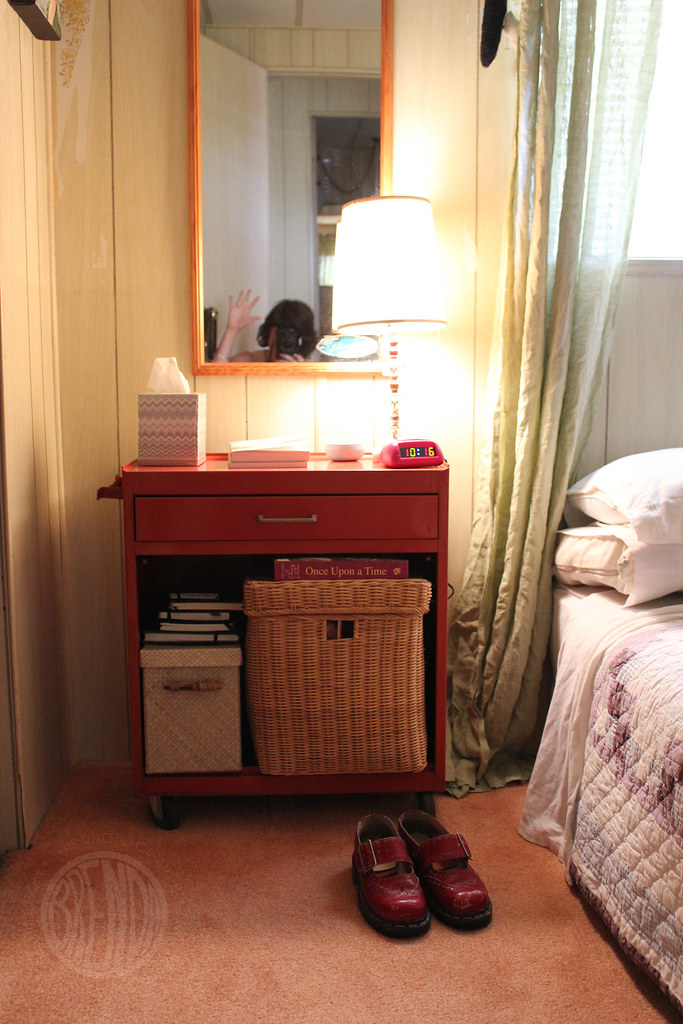 Which would be my new beside table that is totally a tool box that I found outside rusting in the rain. Yep. That is what it is. Not from a thrift store but yet very thrifty! I took off the front door, actually it was already off laying in some wet grass. I chose not to use the front door because I needed to fit my basket things in there. They still don’t quite fit but I think it works. It’s better than what I had. I kinda like the nice clean lines. And it’s red! You know how I love red. It’s quite handy with that tiny drawer and all. It even has a towel bar on the side. Too bad it’s on the wrong side, ’cause you know how I slobber in the night and need a handy towel to wipe my face off.

Just kidding! I just wanted to make sure you were still reading.

And that concludes this weeks edition of Thriftstore Thursday! Tune in next week (hopefully)!