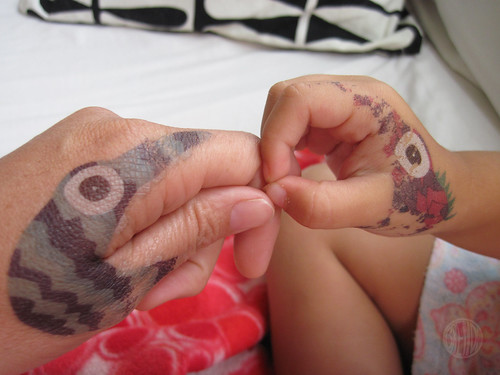 As you know, Bug is a wacky kid. I told you about the sandwiches already. Now she won’t eat bananas because she had a bad dream about eating a banana that was her friend. According to Bug, all bananas have faces now. If I even think of offering her one as a snack, her bottom lip quivers. It’s getting bad.

I’ve taken to peeling and slicing them in secret and then sneaking them into her peanut butter sandwiches. So far sliced bananas seem to be okay. Who knows though. Tomorrow she could swear off carrots or broccoli.

This is a regular four-year-old thing, right?

Bug also gets attached to things. Silly things like leaves, flowers, sticks and rocks, old princess band-aids and candy wrappers that are pink. She has a large collection of dried monkey puzzle branches that looks like a nest of rat tails growing on our patio. 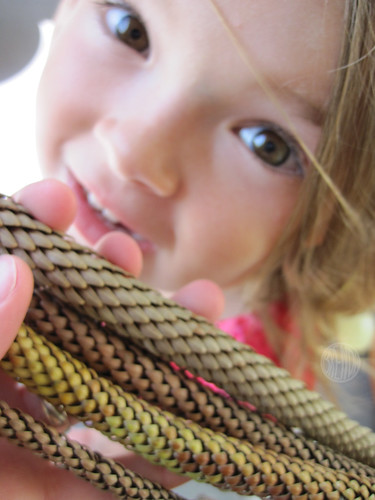 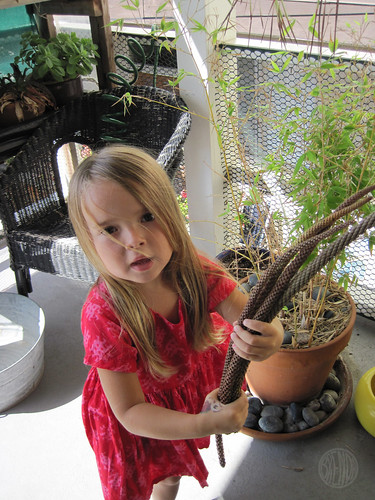 That’s what these things are right? I have no idea.

Every time we go on a certain walk, where these lay scattered on the ground, she must carry at least one home. That’s the same walk where she must walk on the clover with bare feet or all hell will break lose. But that’s another story along the lines of: if you do anything twice with Bug it becomes a routine and therefore must never be veered from until death. I hear this is also normal with four-year-olds.

But sometimes I just have to be the mom and say, no. I can only put up with bits of dried leaves and sticks in her car seat and old yucky band-aids squirreled away in my purse for so long. So I’ve taken to inventing crazy fantastical stories for why we have to leave things behind or, gasp, throw them away. I tried tough love, I’ve tried explaining the logic until I turn blue in the face and it just doesn’t work. I’m tired of the hour-long meltdowns of tears. Bug is not a logical child.

Now we leave the rocks and leaves and flowers behind for the fairies. The princess bandages are going into the trash so that the elves at the dump can use them to build a giant castle for all the toys that have been discarded. The eucalyptus blossoms that blew off the top of the car sunroof are going to be gathered by fairies and made into hats. When her temporary-tattoo monster washes off her hand (pictured at top and below), we’re saying that it’s fading away and going to its monster-land in the sky. You should see the wistful look she gets looking up, imagining them flouncing around in the puffy clouds. 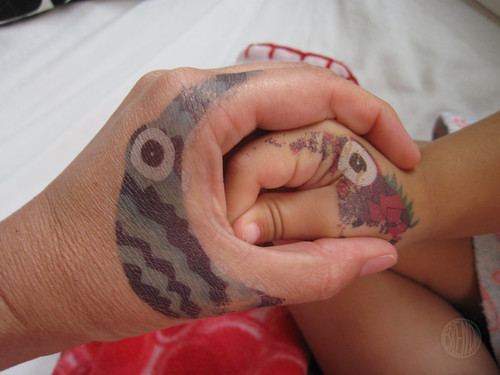 It beats the tears, I’ll tell you that much. Now if I can just think up a good story for all those bananas that have faces on them…