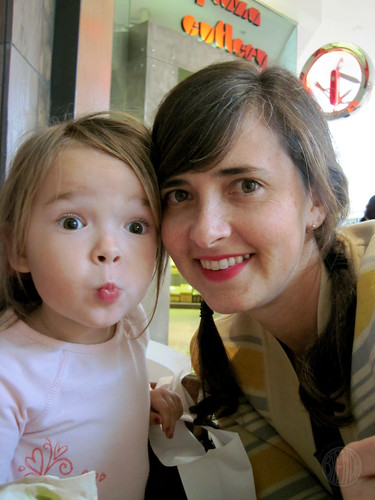 Bug and I had such a fun day yesterday. I don’t know what hit us but we decided to wake up and have a “girl’s day out.” We got dressed up—which means me throwing on a vintage sweater over my normal mom uniform of jeans and a t-shirt and her wearing every single pink thing she could find in her closet. At the same time. Then she wanted a pink bow in the middle of her head so we stole one out of my wrapping paper box and called it an outfit. 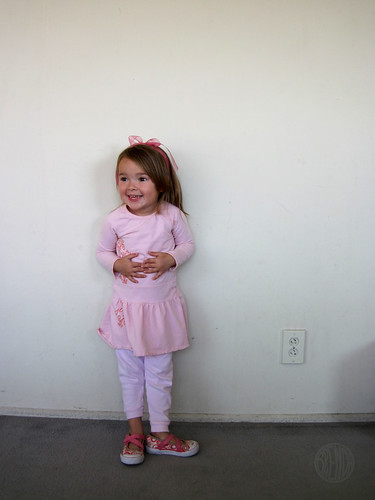 Going to the mall is not really an acceptable activity for us right now, as we are still recovering from the whole Christmas-Birthday extravaganza but we did have a few gift cards to use up so off we went anyway. I keep telling myself that it is possible for one to go walk around the mall without actually buying anything but I have yet to come home completely empty-handed or without my head filled with covetous thoughts so maybe that theory needs to be tested out a bit more.

We did use up the gift cards on a few cute things but I don’t think they were that important to our day. They definitely were fun but we had a grand old time not shopping too. We tested out some purple nail polish at Sephora, rode the carousel, walked along the fountains, had some free coffee (and parfait for her) care of the very nice people who fill up my starbucks card… and pretty much just had a really sweet day.

I can’t believe I actually have a daughter who likes to hang out with me and do girly things. And boy is she girly! You should have seen her eyes pop out of her head as she walked along the rows and rows of lipsticks in every color at the make-up counter. She wanted to try all of them. I tried to explain that little girls don’t need make-up but I don’t think she was buying it. It was like trying to tell her that little girls don’t need candy because they are already sweet. I did end up smearing a tiny bit of silver eye-shadow on her eyelids and we painted her nails purple. That made her day.

On a whim I decided to spring for a tube of bright red lipstick for myself. I’ve always admired the pop that classic red lips can add to an otherwise boring outfit. I don’t normally wear lipstick and I definitely can’t be bothered with all the mess and fuss of a daily make-up routine but I thought it might be fun to have just to wear now and then. So maybe you’ll see me sporting some MadMen lips. Hopefully I don’t ruin too many white shirts in the process.

When we got home, all spifified with my red lips and her purple nails, I wasn’t quite done being girly. Maybe it was the triple shot espresso in my latte, I don’t know… I was suddenly hit with the need to alter some of Toby’s old t-shirts that he didn’t want anymore. I’m not claiming to be a fashion designer or anything and my sewing skills leave a lot to be desired but I thought I’d share here.

Since they were guy shirts and I am NOT shaped like a guy at all (ie: narrow shoulders, short waist and giant pear hips) they fit horribly before I altered them. Ugly neckline, baggy in the shoulders, snug at the hips…just not flattering. But the fabric is soooo soft I just love wearing them. So this is what I did: I cut the neck hole bigger, chopped off the sleeves and created a tie at the bottom by cutting off two strips and sewing them together end to end and reattaching. 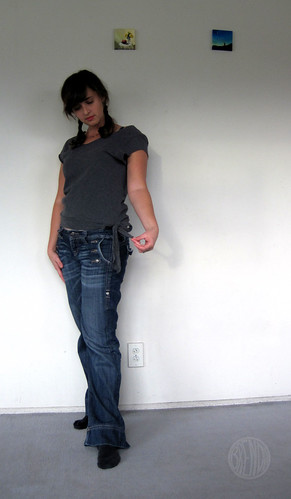 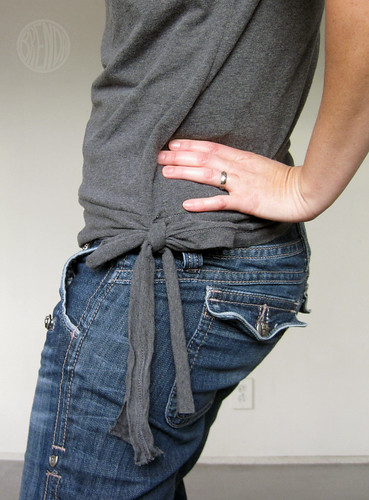 I think it turned out cute. It’s not quite my vision (see below) but they are wearable. 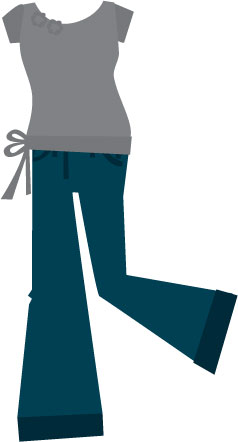 I kind of wish I was more clever at sewing and could have created some kind of yoke around the collar. Maybe I’ll tackle that next time. 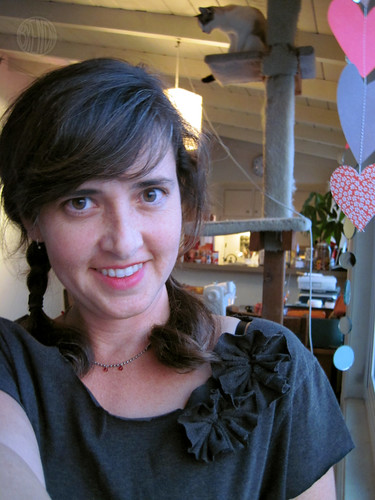 I added some flowers along the neckline by using the discarded sleeve material and gathering it up into a circle. I’m not sure I like them or not. I thought they were clever at the time but then Toby came home and was not impressed so the jury is still out. It was definitely fun though. If any more old t-shirts somehow find their way into my hands, I will not be shy about cutting them up.