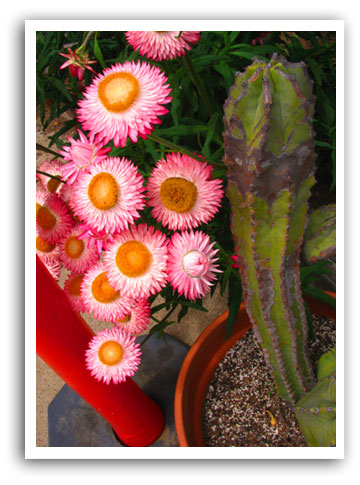 Doesn’t it always seem like bloggers are apologizing for lack of blogging or maybe they’re like me and they’re feeling guilty for the lack of quality blogging? So then you take a break and two weeks go by and you miss blogging like you miss your purse when you’ve left it behind accidentally. It’s that feeling like there’s something missing. I feel nice and carefree but I’m missing my purse. What if I need my keys or my lip gloss or my money! So you go back to your blog and you bang out a couple great posts and the blog continues year after year after year through mediocrity and the rare occasional great post…

Does that mean that these last few weeks have been mediocre? Yikes no! There is so much going on with Baby Bug right now, I think my life is finally eclipsing my need to record it. That is a pretty big statement for someone who’s kept a diary religiously since age twelve. (Except I think I’ve said it before, so whatever.)

Oh the things that she is doing lately! I could ramble on and on and on. Now it all makes sense why kidless people hate to hang out with people with kids. The rambling we do is endless! I hear myself passing social cue after social cue that I’ve said enough and it really is time to get off the phone but I just ramble on and on and on until I hear snores or a dial tone. When I meet another parent it’s like instantly I’m having a contest to see who can tell the most stories about their kid. “Oh yeah? Your kid does that? Well my kid does this and this and this and this!” And on and on we go.

Just like me. On and on and on I go not really getting to the point of this blog post at all which IS: I’m feeling bad for not being brilliant lately.

That said, I do need to chronicle some of the amazing things that Baby Bug has been doing. Some things are so amazing that only a movie could do them justice. I have been taking movies too but I can’t process them until I clear my hard drive of fifty zillion digital photos. I take about 100 photos a day. My computer is choking. I am stuck in Archiving Land. Burn baby burn.

In the meantime here are some Baby Bug achievements:

That two weeks of nothing but grunts has finally ended and now she is babbling! Lovely vowels sounds echo from one end of our house to the other. The great thing is that Toby seems to speak her language and they babble to each other will all kinds of sounds and raspberry splutters. I have a really good movie of that but again, I need to back up my photos first.

She’s also starting to play by herself. It’s the BEST. I put the exersaucer out on our patio yesterday because it’s been so nice and warm lately. She spent nearly twenty minutes talking to the palm fronds that were blowing in the breeze. She also had a long conversation with the geraniums. Her favorite toy is an empty water bottle. She’ll bat that around her exersaucer for many many minutes and then when she’s done, she’ll gum it for another round. Remember how I said the best toys are free. It’s totally true.

Finally she’s taking long naps again. Sometimes as long as two whole hours. It’s heavenly. I’m actually getting things done. But I can’t exactly plan around her long naps. Sometimes she likes to trick me and only take quick fifteen minute naps. She keeps me on my toes. Like right now as I try to type this. It’s taking me two hours longer to type an average post just because I have to stop every minute or so and put my hand in the bugaboo and calm her back down. She thinks she can’t take a nap by herself because every once in a while I take a nap with her. She’s so fun to cuddle with and I love taking naps with her but I sometimes I like to get things done. Plus, I want her to learn how to fall asleep by herself.

I struggle and struggle with all these rules I make up for myself as a parent. To nap with her or not nap with her. To put her in her crib or let her fall asleep where she drops… I am constantly at battle with myself over what my instinct tells me to do and what my brain tells me I should do to be consistent. Consistency is so important but it’s also so elusive. I’m definitely learning that it’s okay to roll with things though. You just can’t be too rigid about things. Babies love to throw unknown variables at you.

The biggest news I have is that she likes rice cereal. Boy, do I have a movie to show you about that! If you like chubby cheeks and little baby lips covered in ooey gooey messy stuff then you’re going to love this messy messy messy baby face movie. She’s so funny slobbering all over the spoon and spitting half of the cereal back out so that she can slobber it all over her fist and the exersaucer and anything else that happens to come into contact with her.

Well I better wrap this up. She still has not fallen asleep. But she’s quiet. Who knows how long that will last.