Birds, flowers and bunnies oh my! I couldn’t conjure up a more perfect day.

Did I tell you we went to the out door bird market and flower market? I’m rushing because I only have a little time in this cafe to upload a million things… but we did and it was the perfect Sunday morning thing to do.

In the afternoon we met up with our group and headed off to Montmarte and the Basilique du SacrÃ©-Coeur, aka Ameli-ville–except I didn’t recognize a thing from the movie. (I’ll have to email Amanda about that if I ever manage to find an internet connection). On the way there we traveled up the most amazing little cobbled street called Rue Moffetard. At the entrance accordion players welcomed us and definitely made it feel like somewhere Amelie might live. Along the way there were small restaurants and shops selling clothing and scarves. It was a very hot day and by the time I got half way up the hill, some of the ruffled prairie skirts hanging on the racks were catching my eye simply because they looked like they would be very cool and breezy to wear.

Because it was Sunday, I was wearing my ankle length “chode skirt” (as Toby calls it) that is made of a lot of polyester. I like my “chode skirt’ because it’s fun to wear. It’s long and narrow and if you take big strides, the fabric stretches as if you’re wearing a rubber tube. I guess I’m weird, I think it’s fun to take restricted stretchy steps. But the problem is, when it gets hot, my legs feel like they are being suffocated in a rubber tube.

So I popped into the cutest un-airconditioned boutique and proceeded to try on fifty or so of the most beautifully feminine strappy sun dresses and skirts you’ve ever seen. It took me a million years to figure out what size I am in French in the tiniest little closet of a dressing room. It was pretty much a shower curtain hung across the back two foot corner of the one room shop. With no circulating air and the temperatures and humidity rising, I was dripping with sweat by the time I finally found the most perfect black sun dress ever. It was knee lenth and empire waisted and tied in the back with two string ties. It was perfect.

In fact it is because of that dress that was so perfect that I have no pictures of my favorite little street ever! And that is because I took so long trying things on that by the time I was done, the rest of the group was at the top of the hill waiting for me. I was so embarrassed. It’s okay if the grandmothers slow the group down but I am the kid of group and I should know better!

Thankfully all was forgiven when they saw me flouncing up the hill in my new little black dress and a big fat smile on my face. The old ladies oooh-ed and awe-ed and because I’m a show off and some festive music was playing at a pub nearby, I grabbed my sister-in-law and did an impromtu do-si-do to show off my new dress. Now that’s a fun dress. My purchase was worth every penny! It was heavenly to be cool and carefree in the most charming neighborhood ever on a hot sunny day. I felt like Amelie herself.

My mother-in-law told me later that two people sitting at some out door tables at the pup had started to get up to join us in our dancing but I didn’t notice them and had already started off before they could. It’s too bad too because how cool would that be to start a little festival of my own right here on a little street in Paris?

After our little trip up Rue Moffetard we visited the Genevieve church (which I can’t find in my guide book right now so I’m not sure of it’s real name) and then a quick stop in the Pigalle to catch a little bus up the hill to SacrÃ©-Coeur. Pigalle is the red district of Paris and there were bright neon signs for sex shows everywhere. (That’s where the Moulin Rouge is.) We waited and we waited for our “little bus” and it never came. Many of the women in our group have knee problems and we hadn’t eaten in several hours so they were about to start a mutiny if our guide made us climb one more hill. So we waited and we waited and we waited. And we smelled the french fries cooking in a restaurant nearby. Everybody was getting very cranky.

There is one woman who is 79 and another 81. The seventy-nine-year-old doesn’t act old at all. She smokes and drinks and runs off at the mouth to anybody who will listen, including perfect strangers on the street. She’s a real crack up. Plus, she keeps up just fine. It would be a dream to get old and have as much energy as she does. So while she’s having some conversation with a funny old man in Spanish (Yep, she speaks Spanish too. Apparently she travels the world quite a bit and has picked up a little of everything) our tour guide rounded up a funny little shuttle that looked like a train. It was right out of Toontown.

Up the hill we went in our little funny train, past Toulouse-Lautrec’s house and all the way up to the beautiful white Basilique du SacrÃ©-Coeur. The hillsides were covered with young people just sitting and watching the amazing view of Paris below. Some people were singing and playing the drums. Other’s were drinking and celebrating some soccer game that was either just played or about to be played. The fans of the rival teams have been harassing each other for a few days now. There was just a general sense of relaxation and merriment that I haven’t really been a part of since maybe when I was in college and
we used to hang out in Berkeley.

Probably some people who read this will be terribly disappointed in me that I didn’t actually go inside the Sacre-Coeur and you are right I should have. But we only had twenty minutes and I was so captivated by the crowd that I spent most of my time wandering and taking pictures.

At dinner we ate in the square at the top where all the artists gather to make charicatures and sell their wares. We sat in the middle of it all and decided to splurge on a steak in pepper sauce, a glass of bordeaux, tomato and mozzarella cheese salad and a caramel cream custard for desert. It was a perfect end to a perfect day!

But wait there is one more thing we did that day! We took a night boat ride on the Seine! I took some movie footage (as well as some from the Eiffel Tour, the Arch de Triumph, some acordian music from the magical Rue and a ton more) but I just haven’t had a moment to put the footage together in a movie format. Maybe when I get home I’ll just have to play catch up. As it is, I’ve used up my entire free time just typing all this up.

But don’t worry, I’m not wasting my Paris time, I NEED to write this down because I want to remember every moment. 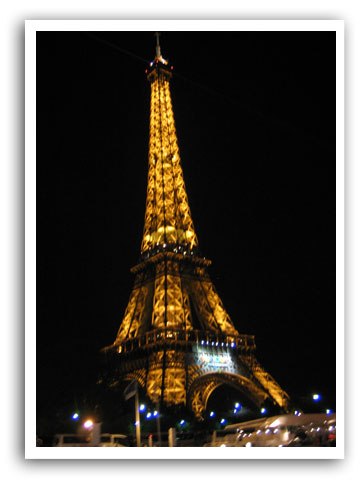