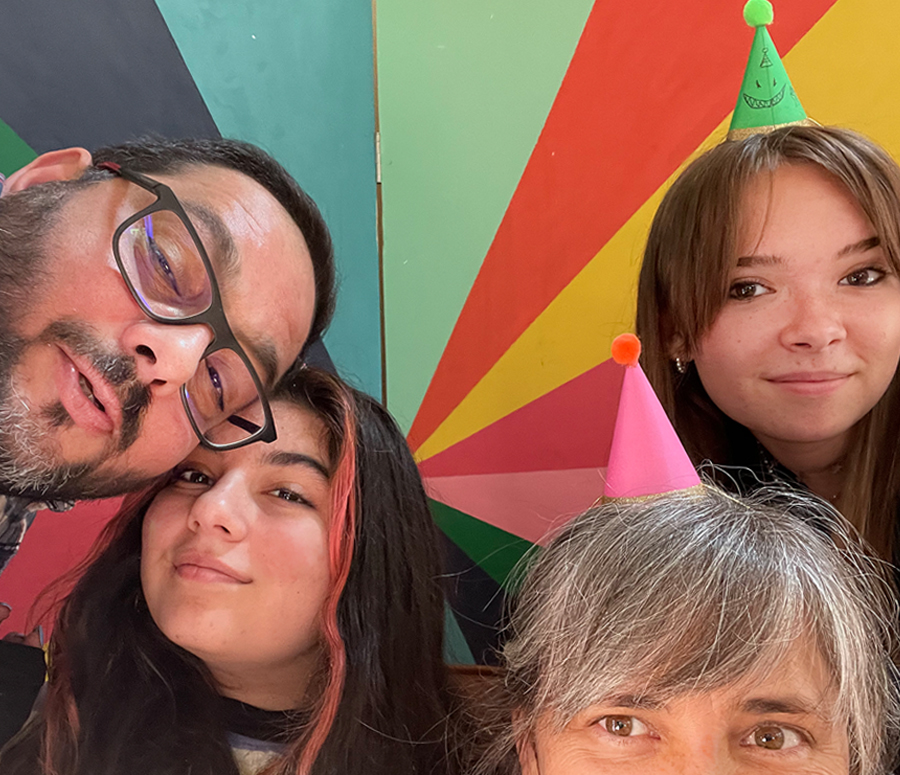 Hey! Remember this old blog?!! I forgot to write here for erm, several weeks. That’s a thing I do, right? Write now and then? Well, I would let this post pass because birthday shmirthdays, everyone has one and I’m really behind getting around to it, BUT I have to document the most hilarious birthday party ever and I have to share the fun. If anyone is looking for a way to get your whole family together for a rocking good belly laugh for ALL ages, then have I got the party idea for you!

Let me set the stage…

Payam turned 49 on April 14th. It’s not a big deal year he insisted but I disagreed. I think forty-nine IS a pretty big deal because it is the last of your forties! We should really celebrate the last one in style, right!? Then there’s the whole quarantine thing where we’ve been dying to celebrate something, ANYTHING, since forever. So 49 it is! 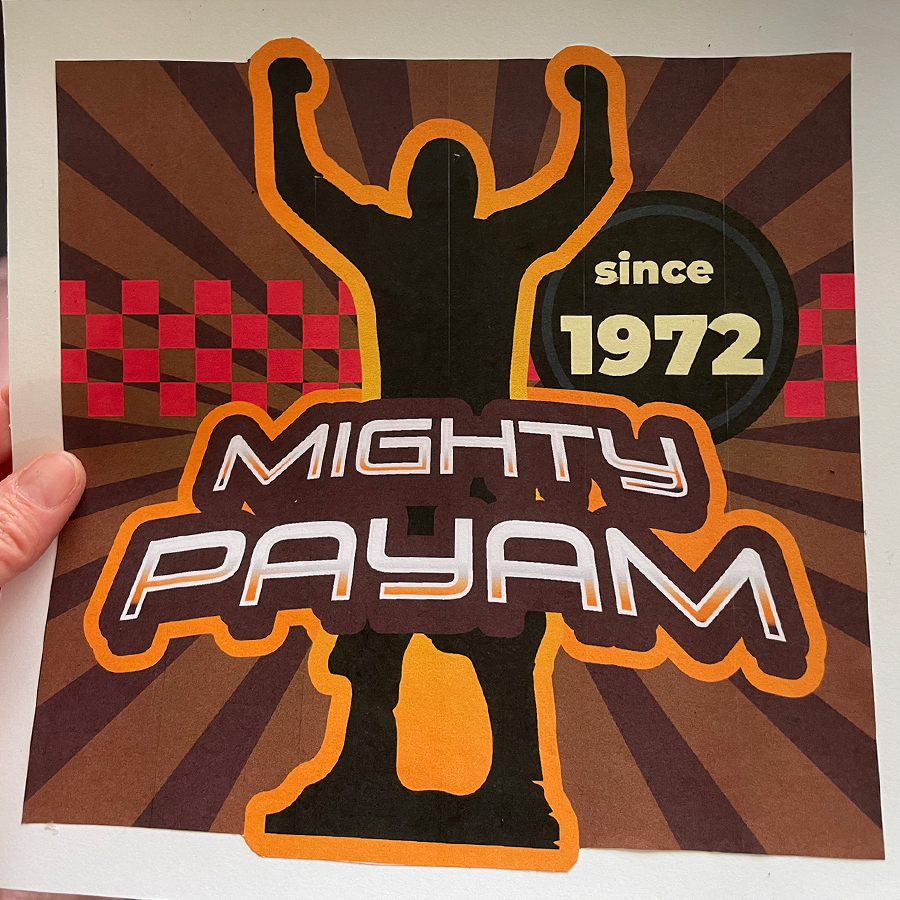 Payam is known for being a risk-taker. He’s also known for being a bit of a dare-devil and he’s terribly accident-prone which is not a good combination. In fact, he has a motorized skateboard that has been sitting under his desk for about two years now and I will not let him ride it because I know he will fall and crack his head open or break some part of his body. It’s not an IF, it’s a when. He WILL ride until it happens, that’s just the way he rolls. So you can see why I’m a bit paranoid about it. I do not like taking him to the ER.

But I’m not completely unfeeling either. I do feel bad about being a huge worry-wart drag who makes rules about fun things like skateboards. He should be allowed to break his neck if he wants to, right? It’s just I’m having a hard time with that. So I came up with a compromise: I bought him a motorized scooter.

We had tried them in La Jolla on my 47th birthday and they were sooooo much fun. Almost as fun as a motorized skateboard and 100 times less dangerous in my opinion. I mean, there is a handle to hold onto. That’s a good start!

It was a bit costly but I justified the purchase because I know it will be used by the whole family AND we’ve saved quite a bit during 2020 since we’ve just stayed home on our butts all year. So for his birthday party, I hatched an evil plan. 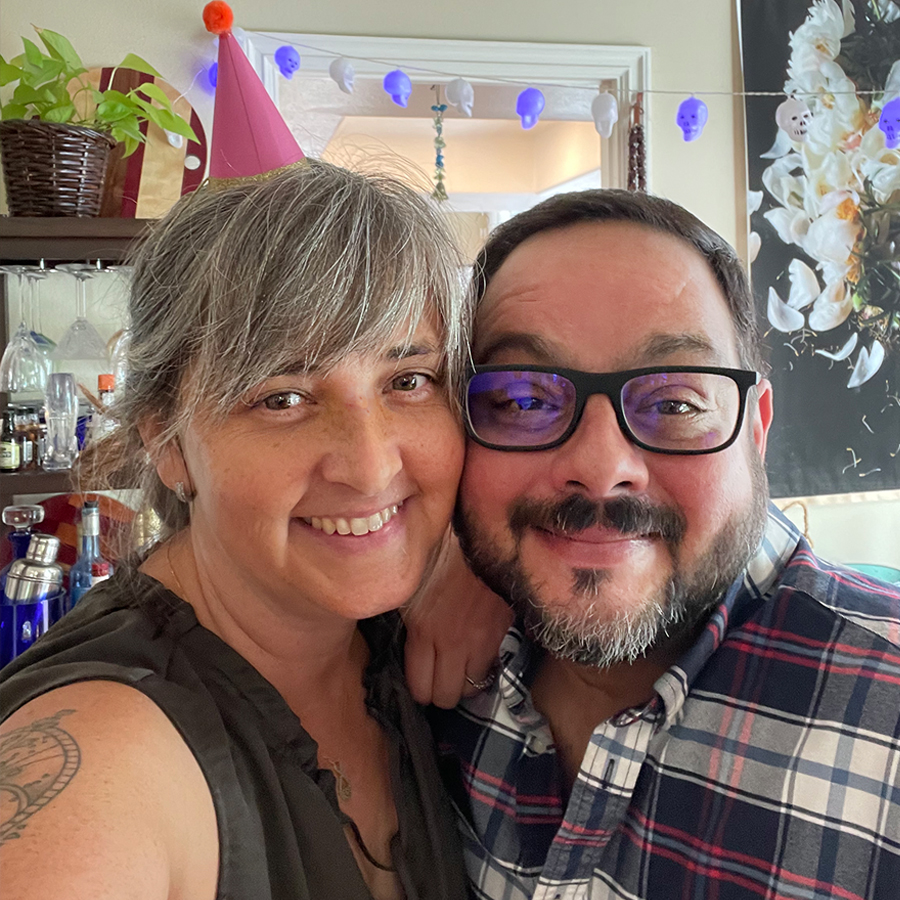 I contacted everyone in our small pod of a family and told them about my purchase. I asked everyone to buy Payam safety gear to go with his new scooter. Since Payam’s dare-devil personality is an issue for all of us, everyone was more than happy to join in on the saftey-gear game.

Payam’s mom bought him knee pads and elbow pads. Joon bought him a helmet. Payam’s brother bought him bubble wrap and his girlfriend bought him an air horn.  My mom and dad bought him a high visibility vest (perks of my Dad’s CERT biz) and as the piece de resistance, Bug made him a gift certificate to the ER. All as a joke of course.

We were beside ourselves in glee thinking up this plan!

Payam was royally confused. I wrapped his present earlier during the week and made sure to disguise it by adding several boxes to it to make it a giant odd shape. We told him it was a toy truck or a jet ski. He was stumped.

Then on the day of the party, we had him open all the presents except Bug’s before my giant one. He couldn’t figure it out at all. He thought maybe we were finally letting him ride his skateboard. Poor guy, he was very wrong.

If only you could see the joy we had watching him open item after item of safety gear. It was priceless! Everyone was laughing until their sides hurt, even Joon who usually is her solemn goth self, speaking in mono-syllables and eye-rolls. I was so happy to have the whole family in on my giant joke. And of course Payam was his usual good-natured self playing up the comedic timing for each present with exaggerated surprise and dismay. It was great. He was in his element. 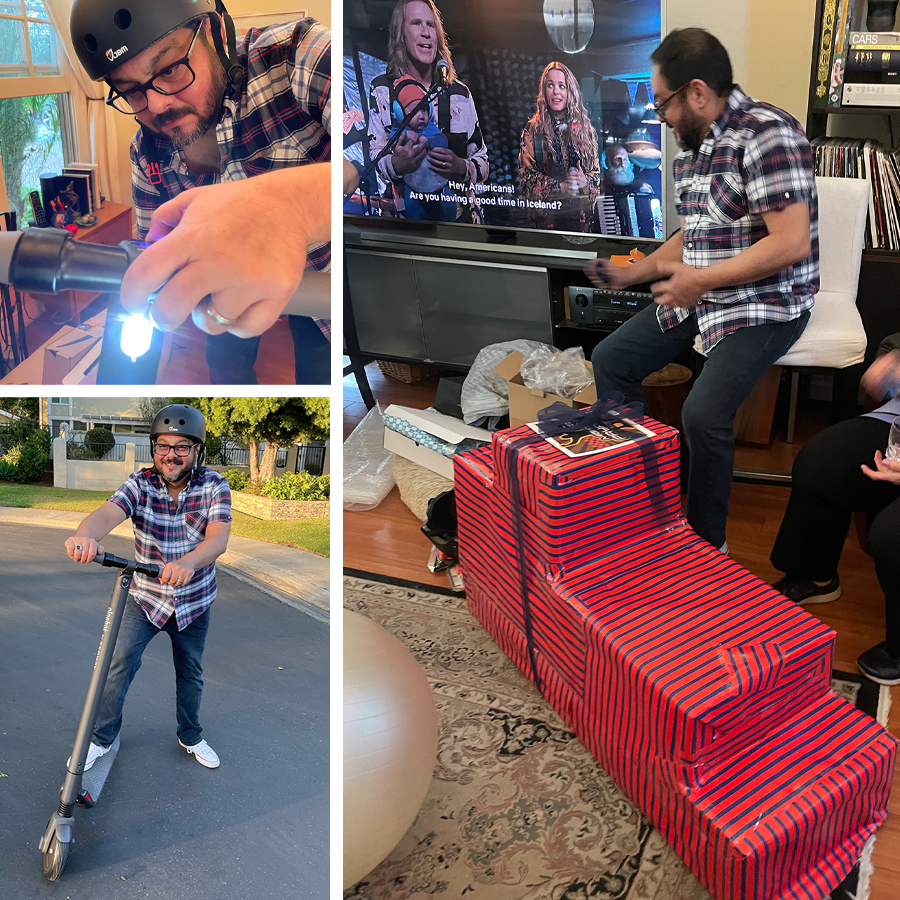 What a laugh! And then when he finally got to the skee-doo toy-truck-sized present, it was shock and awe. He was so excited. We ALL were so excited. It was like Christmas morning for fifty-year-olds! We all had to rush out and try that thing ASAP! 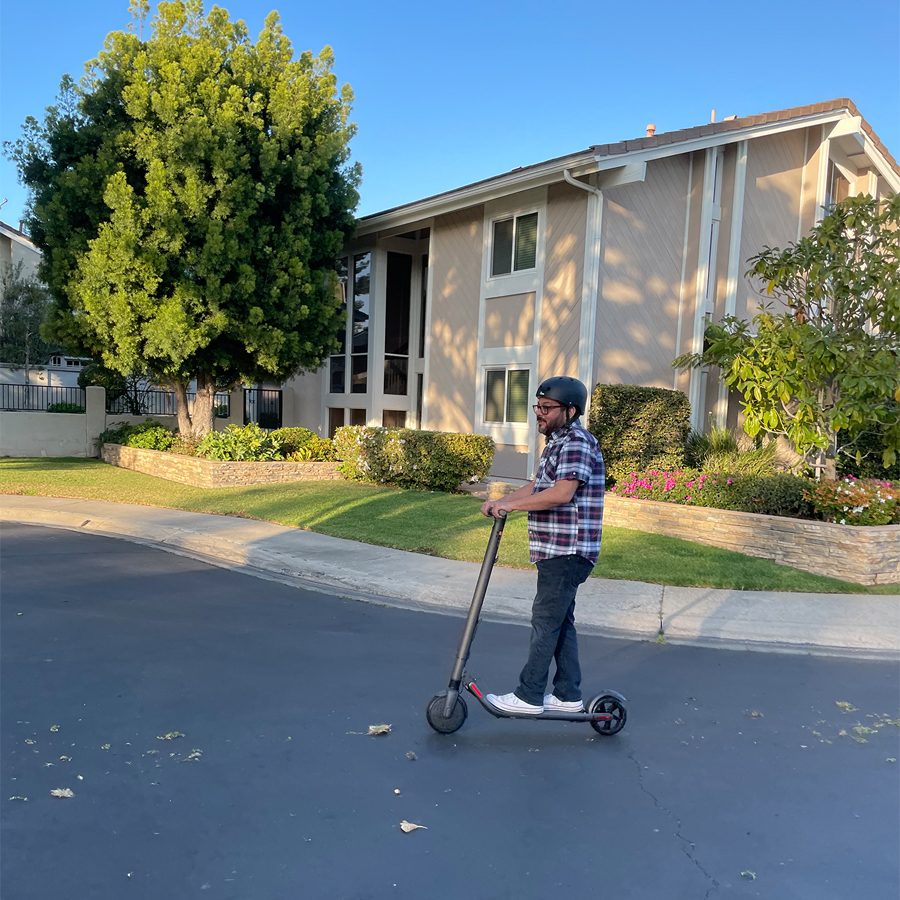 It was even more fun than I thought it would be. I think I’ve taken the scooter for just as many rides as Payam has and I LOVE it. We use it EVERY DAY! There is nothing like the feeling of the wind in your hair as you cruise around your neighborhood. It can get up to 25 miles per hour too which is really really fast. 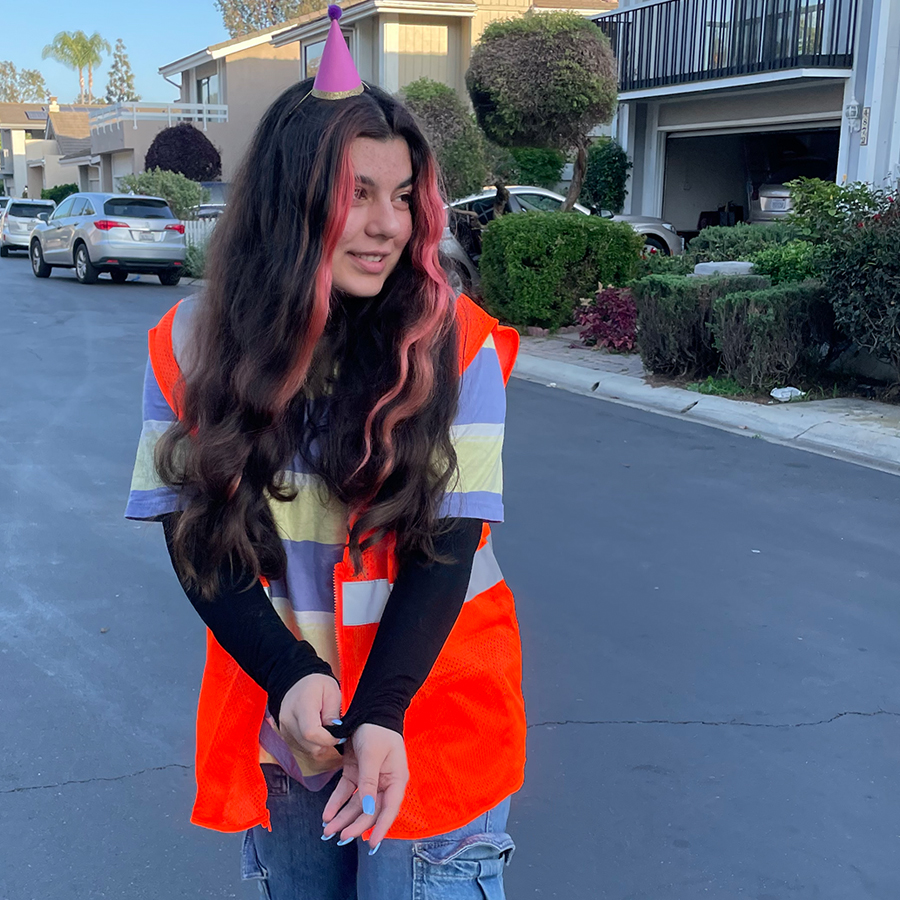 Joon confiscated the high visibility vest for a fashion statement and we haven’t seen it since. 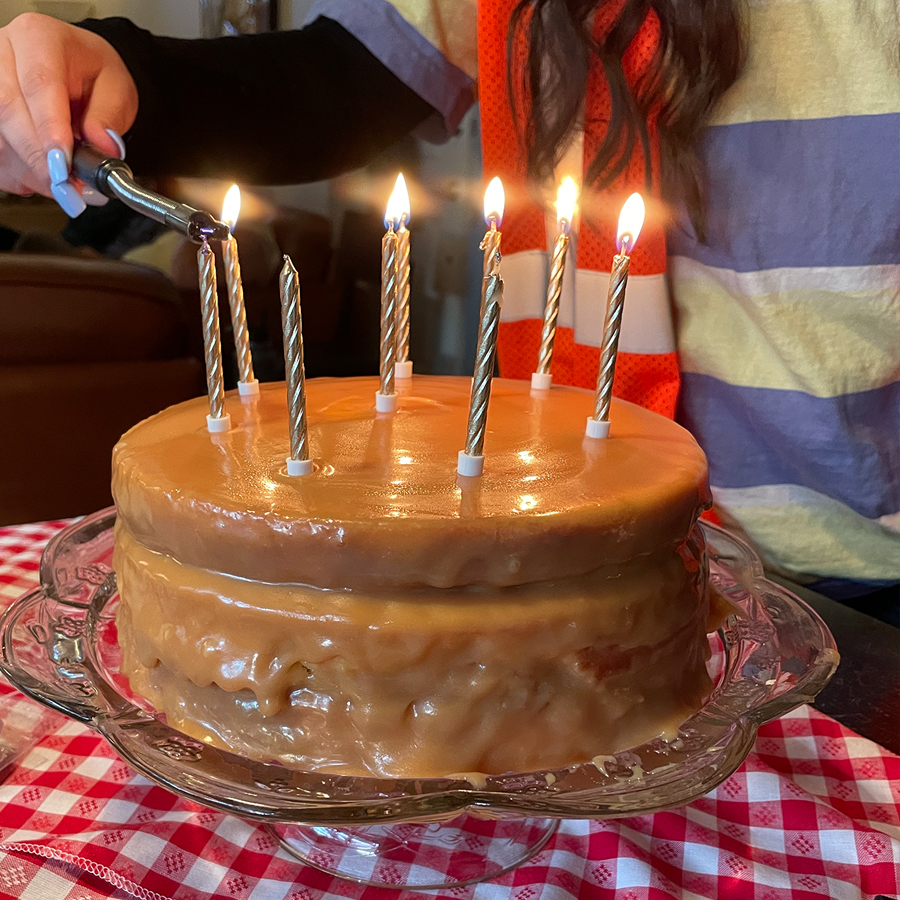 After everyone got a chance to ride the new scooter we all came back inside for the yummiest caramel cake that Joon made. She is QUITE the baker, goth queen and all. 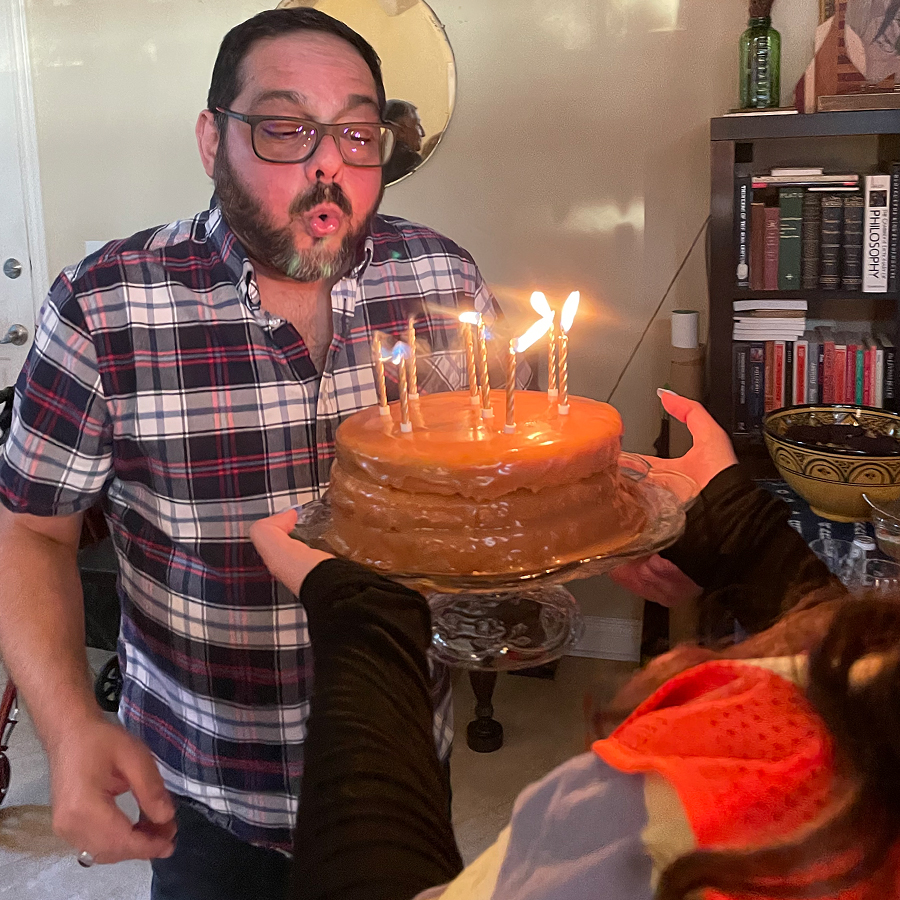 We sang and Payam blew out the candles, which in hindsight seems like a terribly irresponsible covid-spreading thing to do but too late now. Thankfully, almost everyone is vaccinated. Just in me and the kids left and I’m getting my second shot on the 20th. 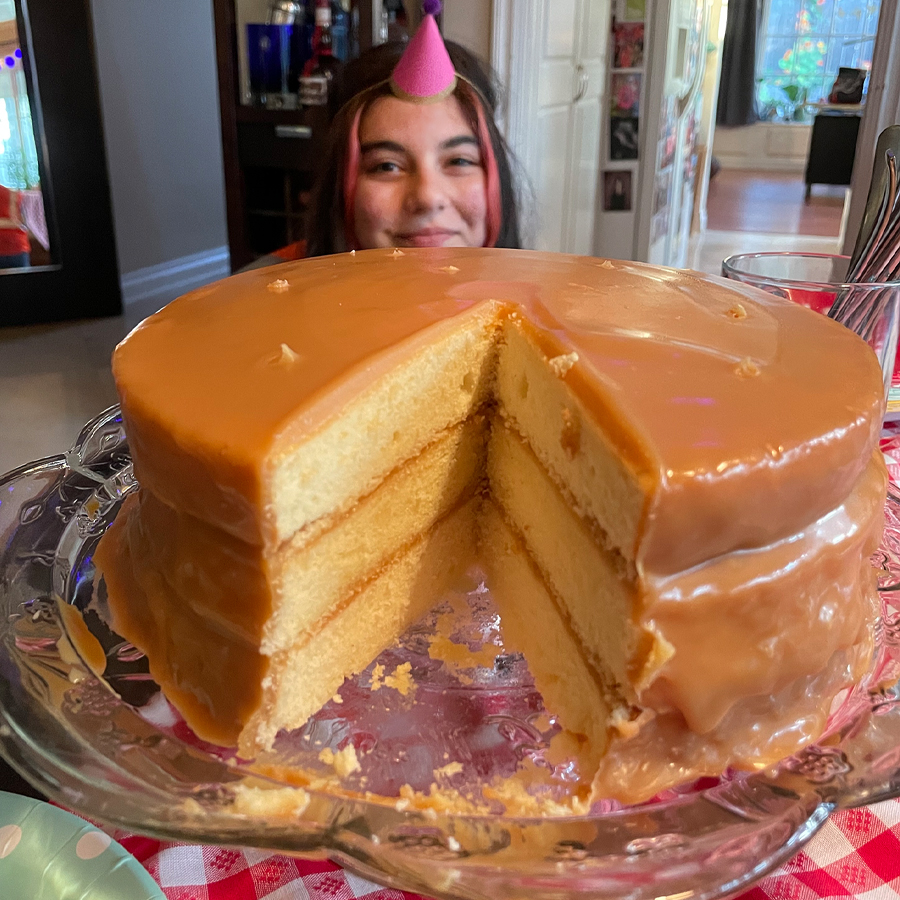 The cake was delicious of course. It was just all good. Just what we needed coming out of such a crappy year. I’m so happy to be celebrating again. My birthday was a big bust last year, and a pretty big source of sadness for me (like everyone’s was in 2020) but my 49th is coming up in JULY so who knows what could happen! I’m bracing myself for some serious revenge-gifting from Payam. (No pressure or anything, Babe!) 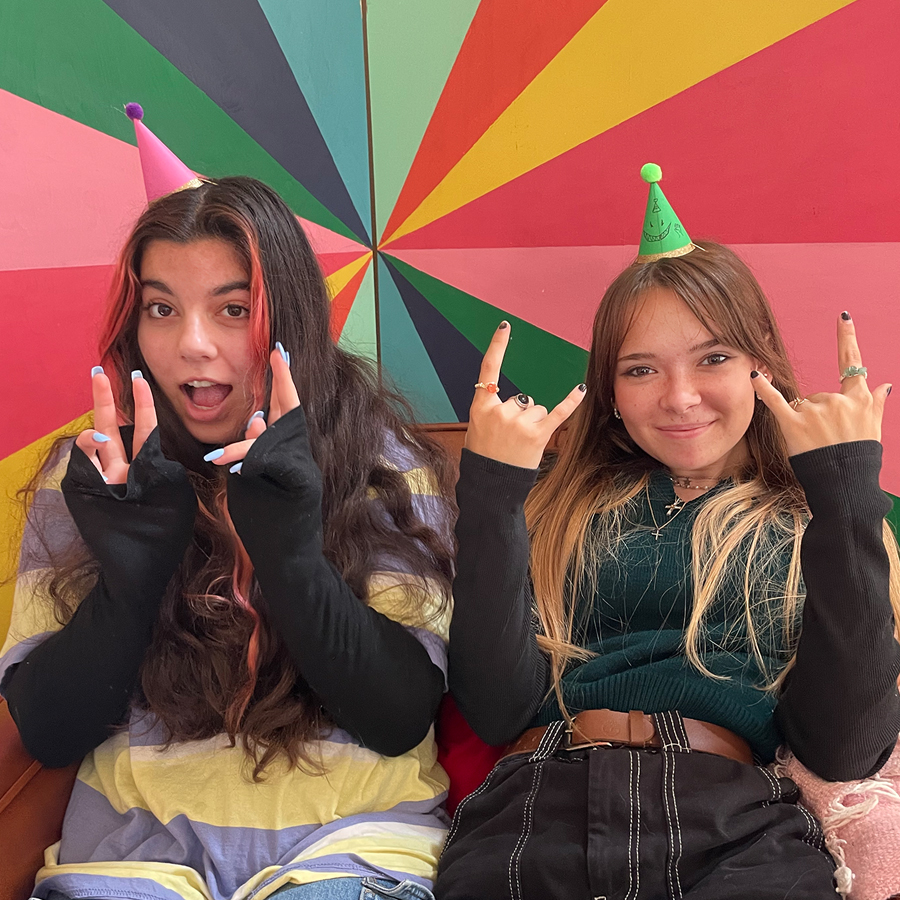