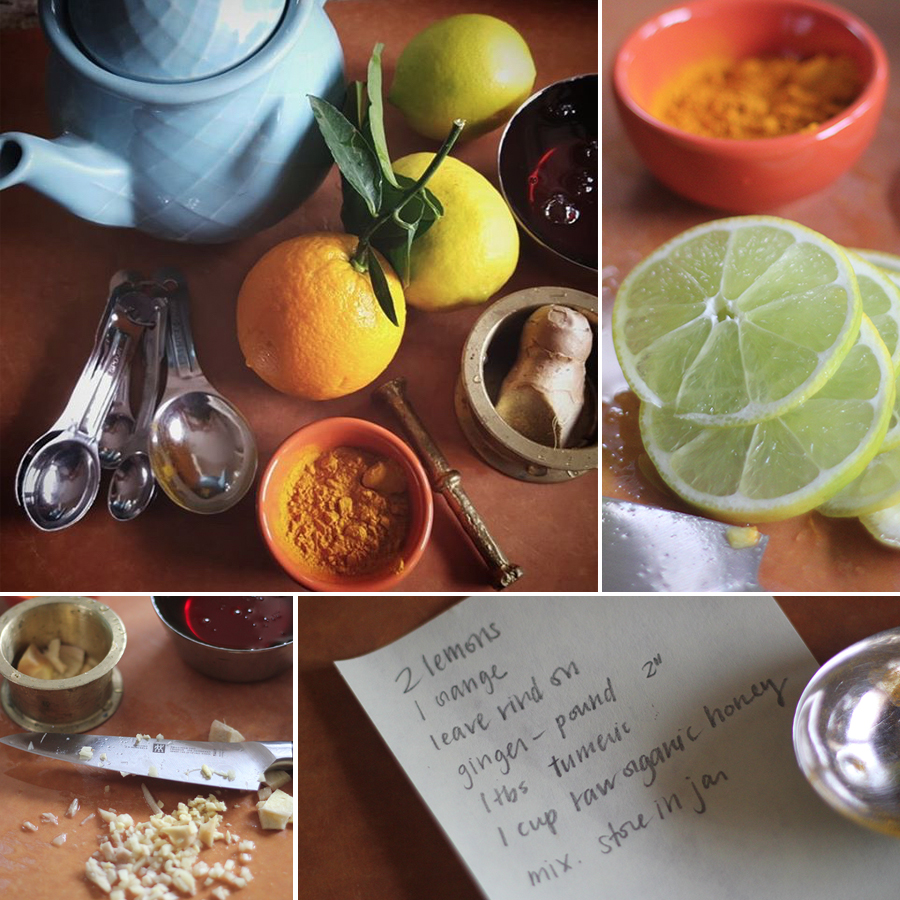 I’ve caught some kind of weird viral bronchitis that’s going around (don’t worry in the scheme of illnesses, totally not a big deal) and Payam sent me this recipe. It instantly inspired me and I had to make some STAT. I can’t take any credit for this recipe at all. I just spend a lot of time on pinterest for my job and I’ve been more and more inspired by food photographers lately so when I see beautiful raw ingredients in the sunlight from my kitchen bay window, I can’t help but want to pull out my 50mm lens and try some test shots. Even if it means getting my camera all sticky. 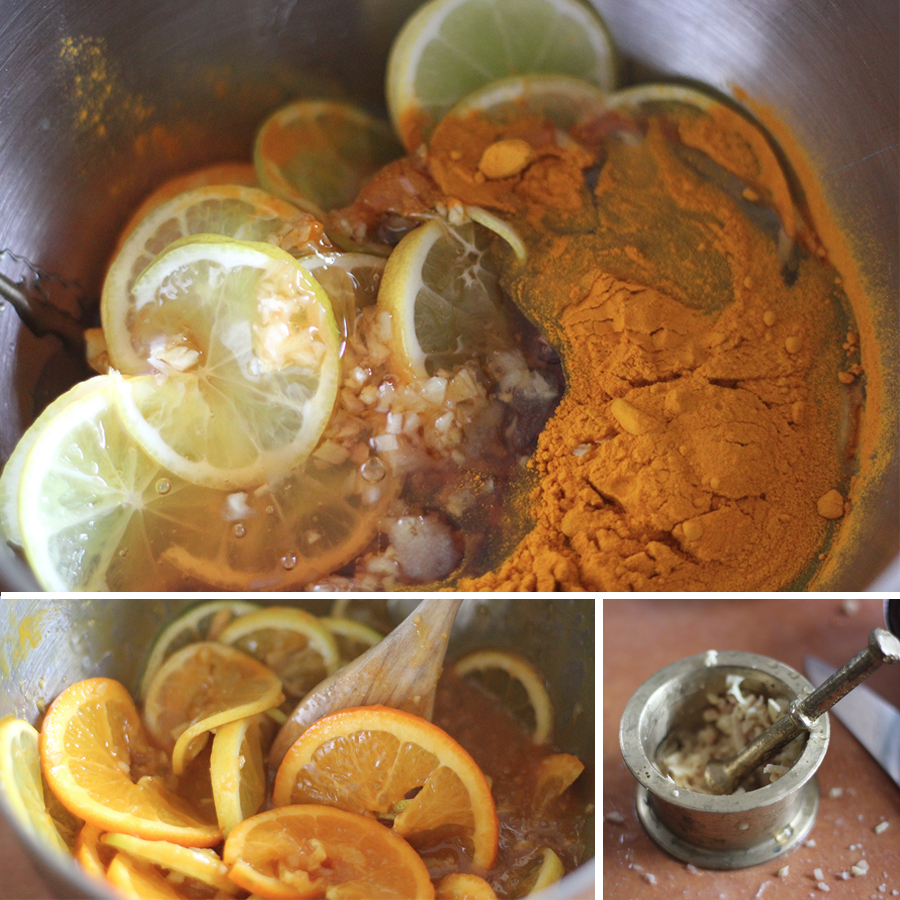 I didn’t have any lemons but we have a lime tree in our front yard that has been making the biggest, juiciest limes ever. It’s kind of a shame that it’s winter and margaritas are not my go to drink anymore. Good thing limes stay fresh on the tree for a very long time.

I sliced up all my citrus with my fancy new knife from that cooking class I took. I chopped up a big piece of raw ginger (because I love it spicy) and pounded it to a rough paste with a mortar and pestle. Then I dumped everything in a bowl with honey and a heaping tablespoon of turmeric. The recipe says to go light on the turmeric because it can be a lot to handle but I didn’t. More spice = better in my eyes. Big chunks of ginger, lime seeds, tons of turmeric…bring it. 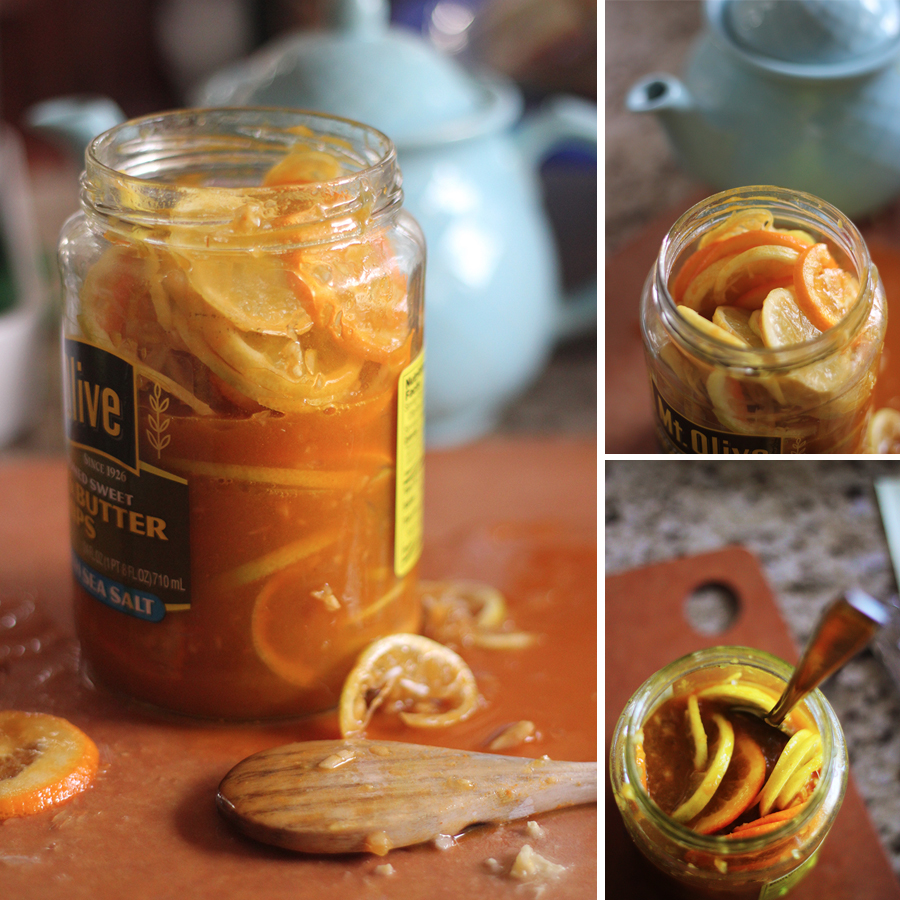 Then I slopped my magical concoction in the only jar I have on hand right now, a pickle jar. Good thing it had been through the dishwasher a few times already and didn’t smell like pickles anymore. 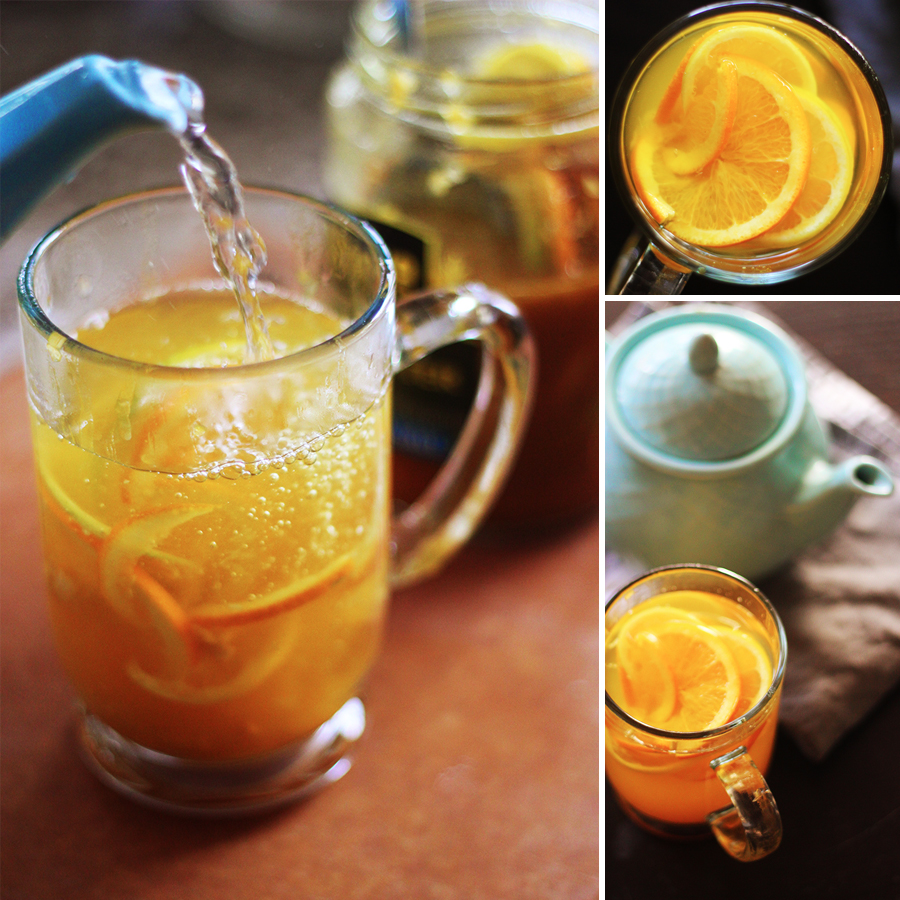 Before I put my jar of super tea juice in the refrigerator, I spooned a sloppy spoonful into my favorite clear glass tea mug and poured hot water over it. Mmmmmm…. it smelled good. And tasted pretty good too! I refilled it twice and drank it all down to even munching on the lime and orange rinds at the end. Good stuff! 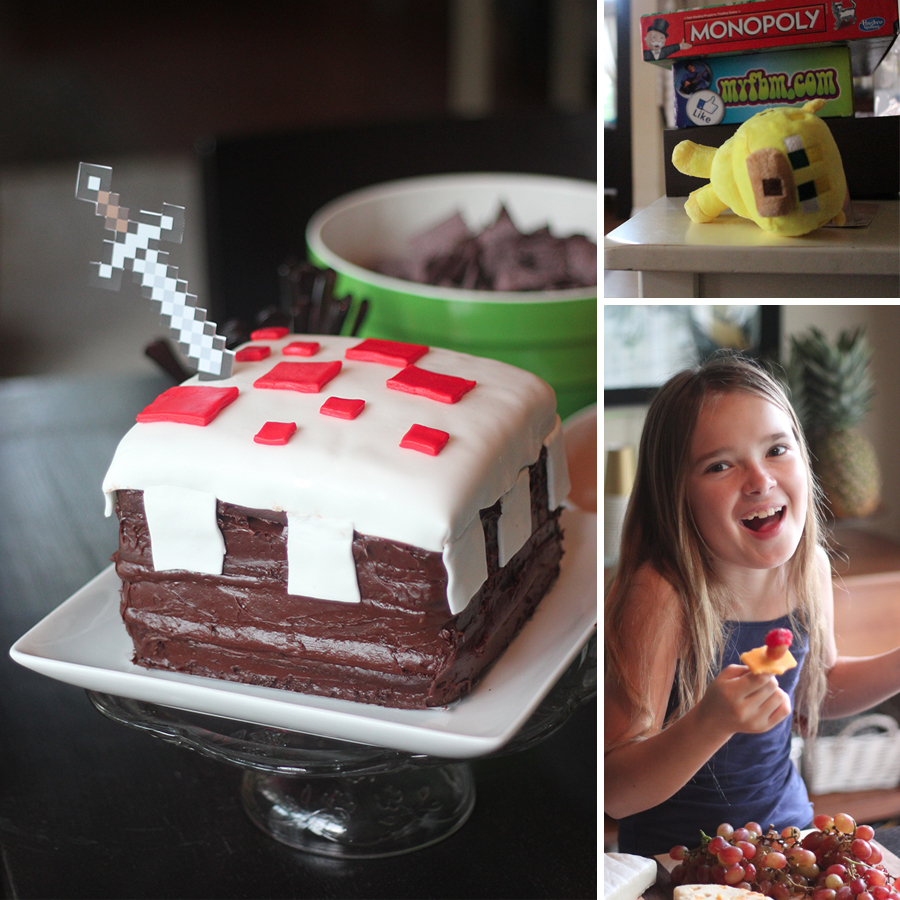 This last Sunday was Bug’s 10th birthday and to celebrate it we threw her a Minecraft birthday party. Actually I should correct myself and say that it was a glorified Minecraft playdate and sleepover because apparently being the child of the queen of parties makes you grow up and not like big parties. Let’s just say I feel some of Martha Stewart’s pain when her daughter decided to elope instead of have her mother host a fabulous party. Dammit.

Part of growing up is exerting your own unique independence and even though it might frustrate me, I have to honor that and let her do her thing, at least on her birthday!

For Bug that thing is a small group of friends and MINECRAFT! 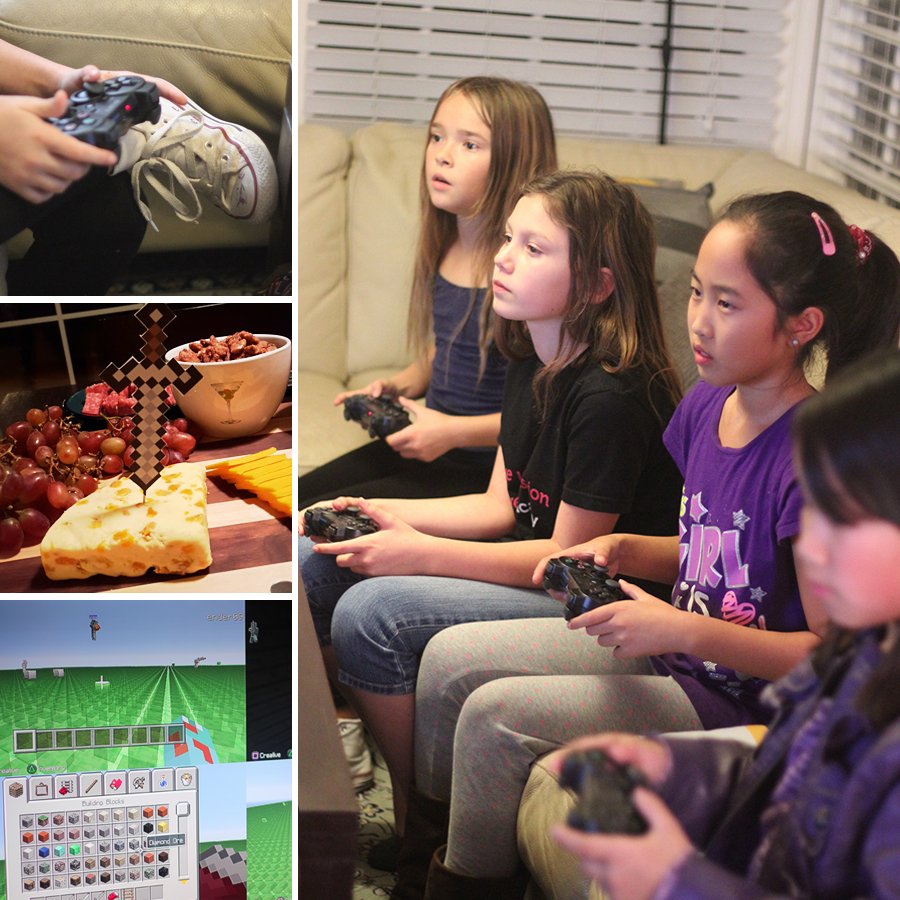 Armed with extra controllers and a super big screen, the girls took up residence on the couch and played their Minecraft hearts out.  For once we didn’t nag them to log off and do chores or switch to watching something more family-friendly on tv. It was Minecraft all the live long day and into the night. We served them dinner: enchiladas for Bug (her special request) and pizza for everyone else. AND! I made a Minecraft cake as close to the game version as I could muster!

There are many, many tutorials out there on how to make a Minecraft cake but I have to say that conquering marshmallow fondant was a new goal for me. It was a colossal mess of course, as I opted to make the recipe where you pour a whole bag of powdered sugar on your cutting board (that was too small) and fold in the melted marshmallows pasta-making-style. But in the end I persevered and it turned out pretty cute! 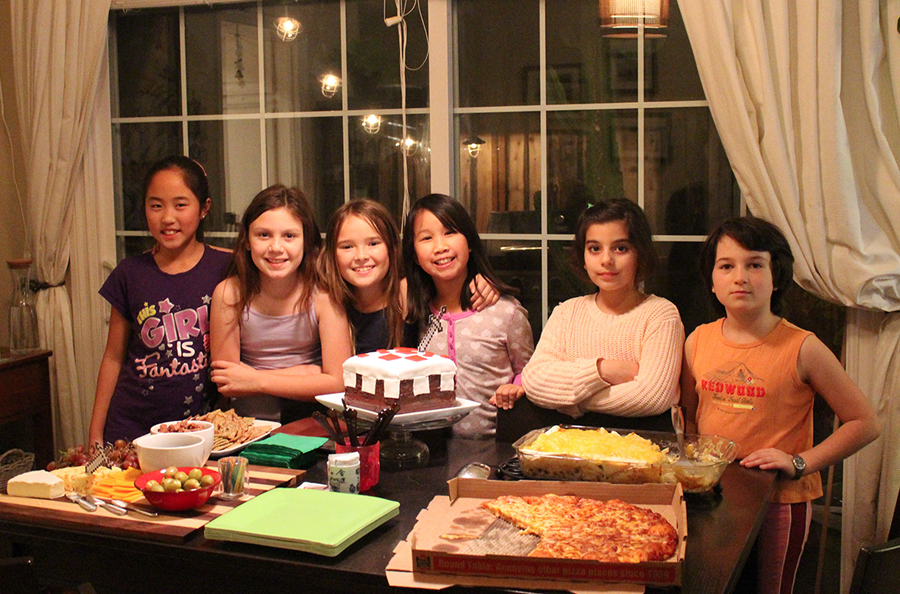 As the night wore on, the girls drifted off to draw on balloons and play card games. We covered the floor with blankets and an air mattress and let them attempt to sleep. That didn’t go so well, naturally. They stayed up until 1am. Payam swears we will never have another sleepover again. I’m not so sure. Especially since my kid is NOT a night owl and she got annoyed at her friends when she just wanted to check out and watch Minecraft videos on YouTube while they wanted to party the night away. 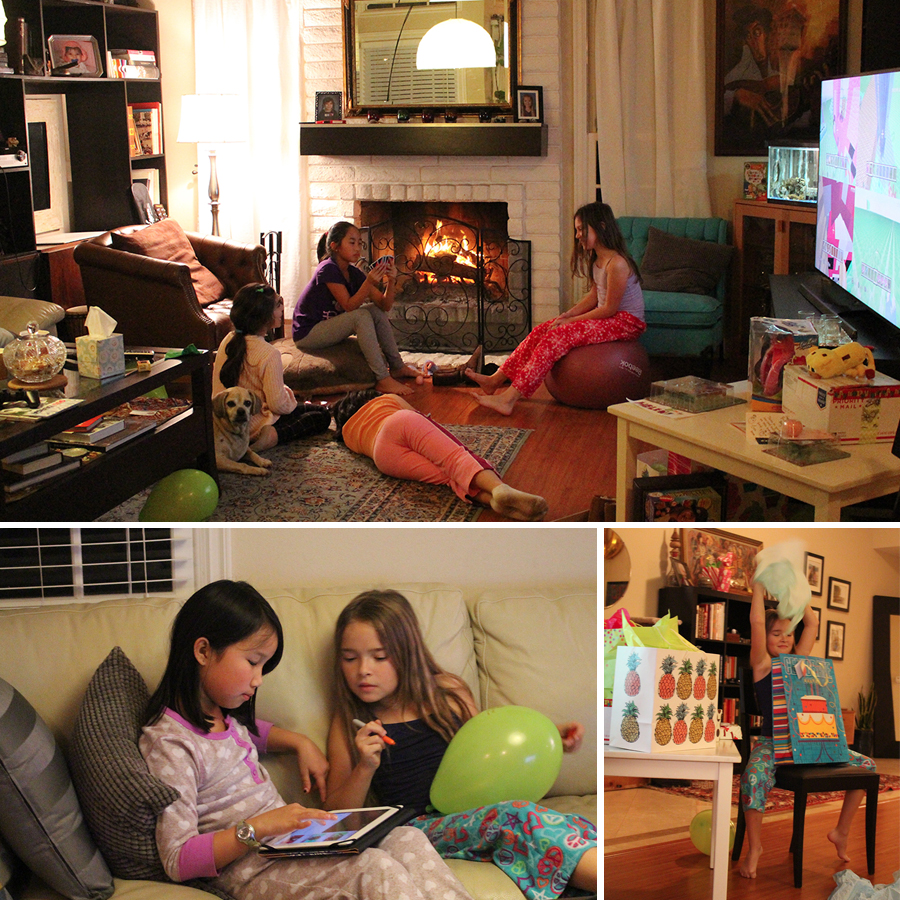 In the end they all fell asleep and were rearing to go the next morning. So of course we had to make garbage pancakes! 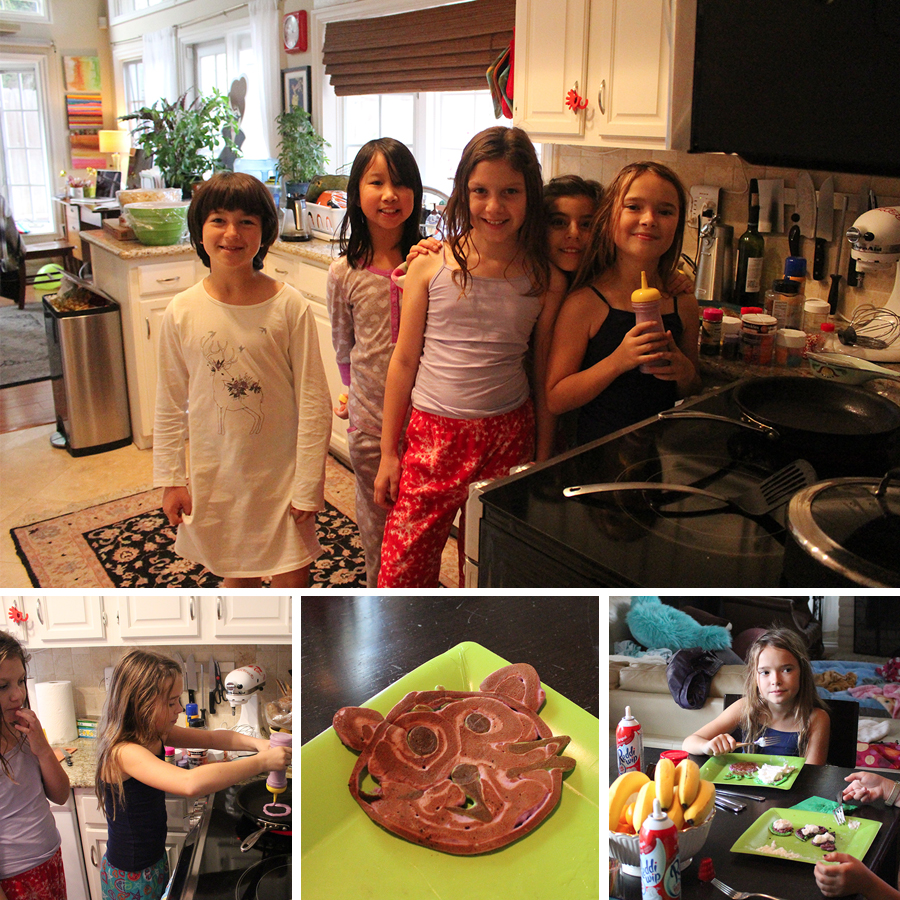 And so a new crop of garbage pancake artists were born. They really are the best thing. 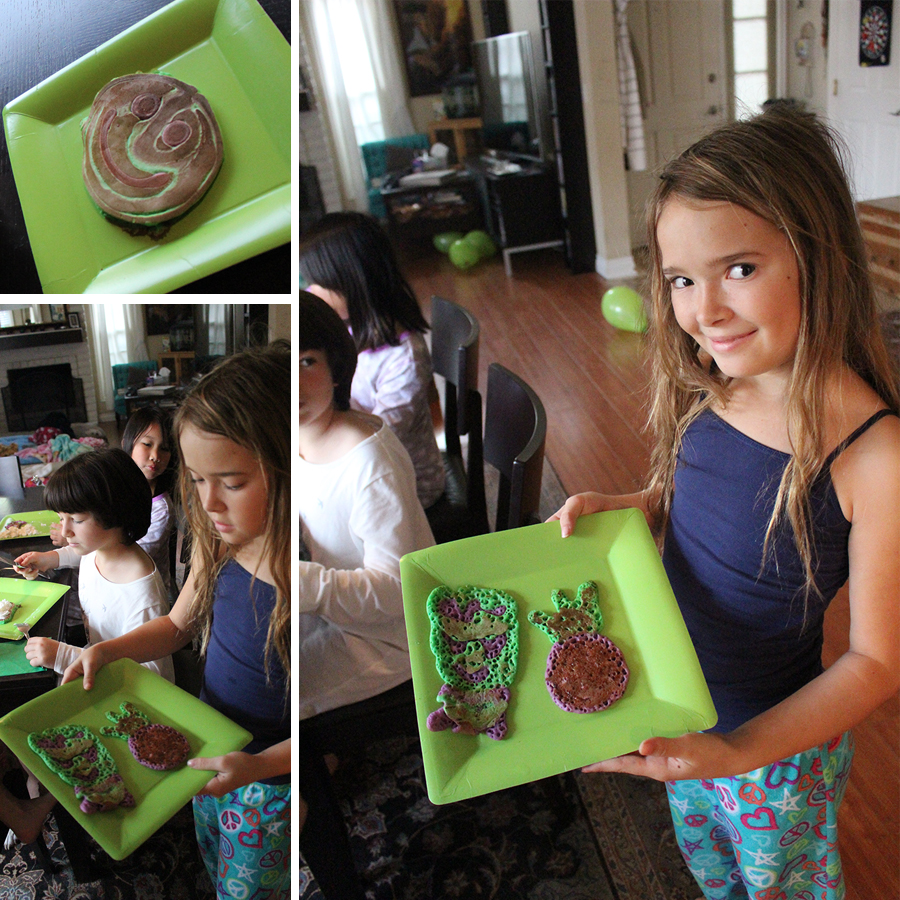 Bug made pineapple-shaped pancakes, a theme with her as you probably know. 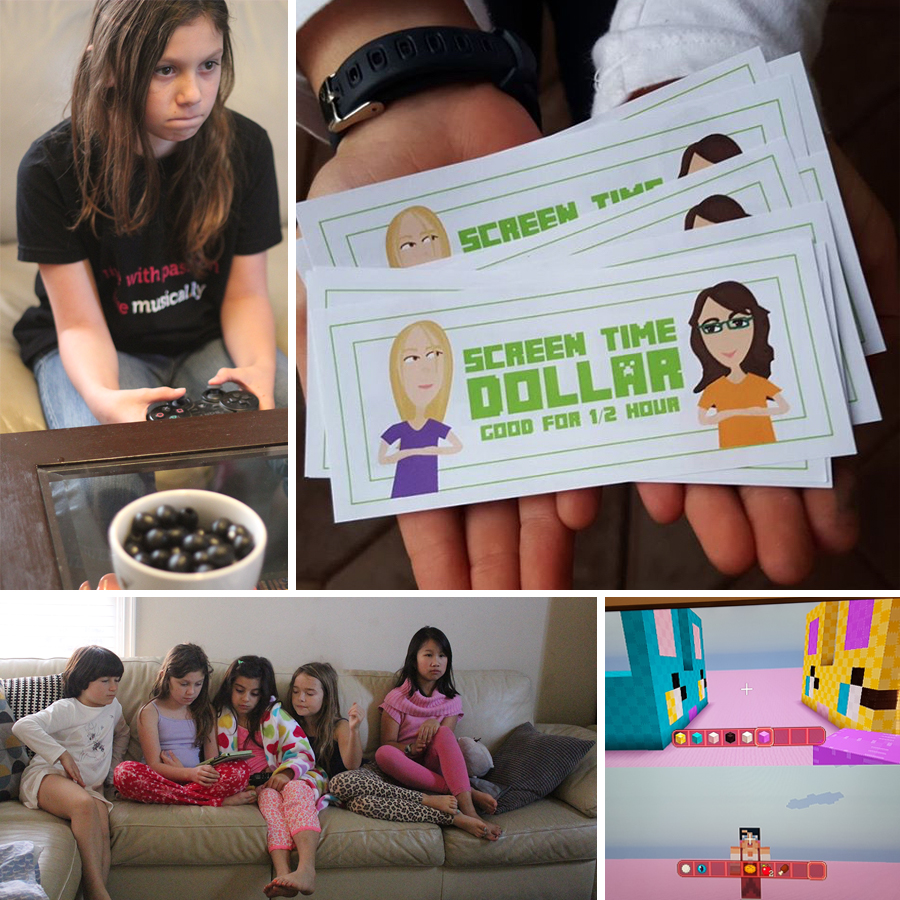 And that was that! Now it’s back to reality and not so much Minecraft. We’ve instituted some new rules in our house and now the girls earn screen time by doing chores and helping me with my crafting posts. For every chore they do they earn a Screen Time dollar. It’s working great. 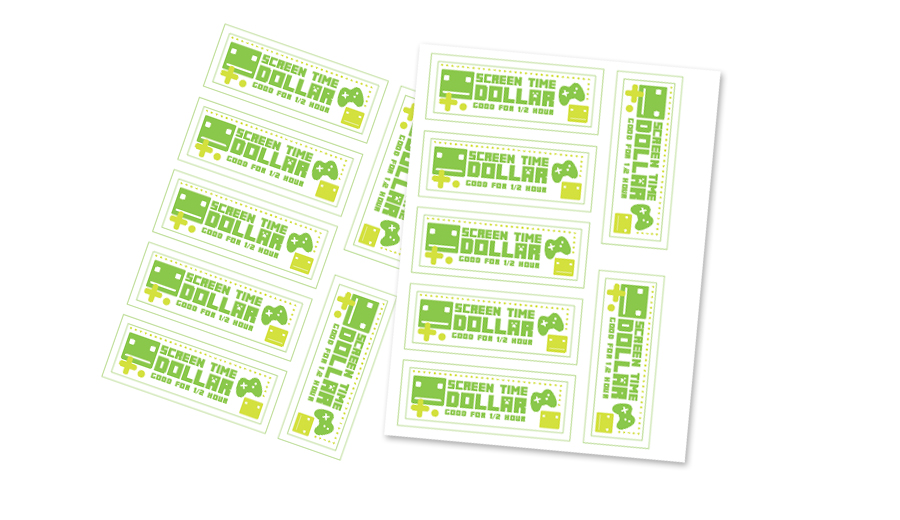 So I made you some too! Click and Print!