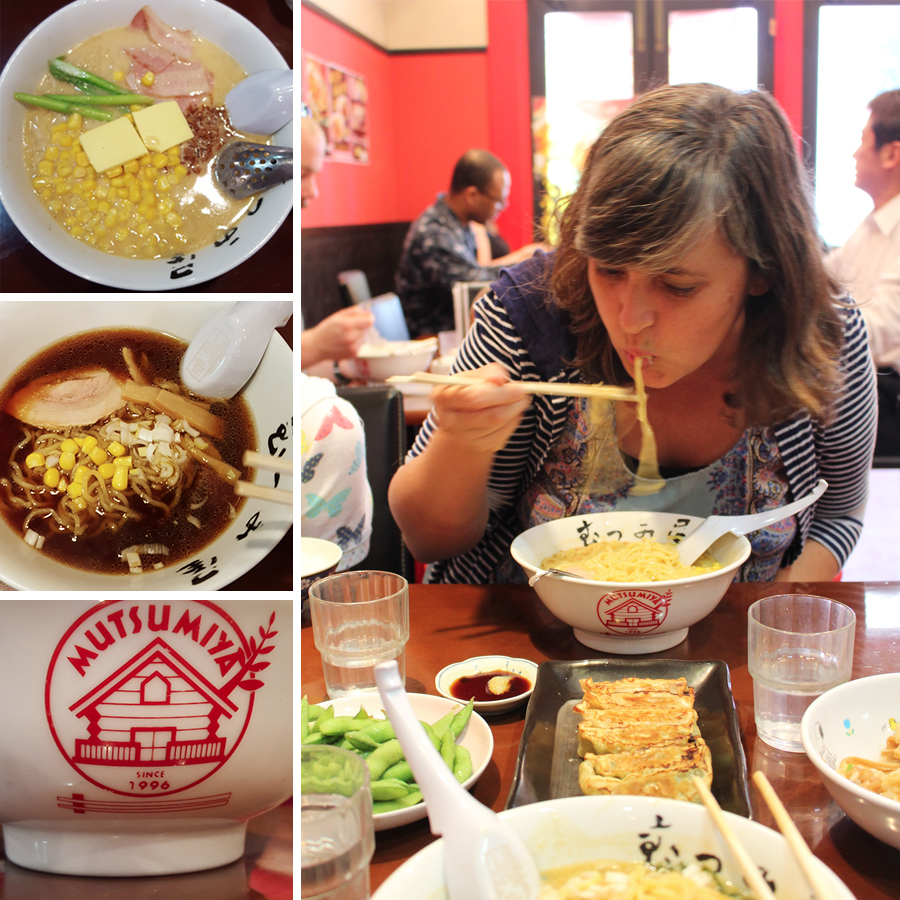 On the fourth day of my Japan trip I discovered ramen. The end.

Just kidding. I’ve had ramen many times before but never like this! Everybody says the Japanese make ramen an art form and they are right. My ramen had milk in it and butter (!) and corn, asparagus, caramelized onions AND BACON! It was big bowl of cholesterol-sodium heaven. I would eat this every day if I lived here. I might even try to make it when I get back home. I don’t know how I’m going to make fresh ramen noodles but I’m going to look into it. 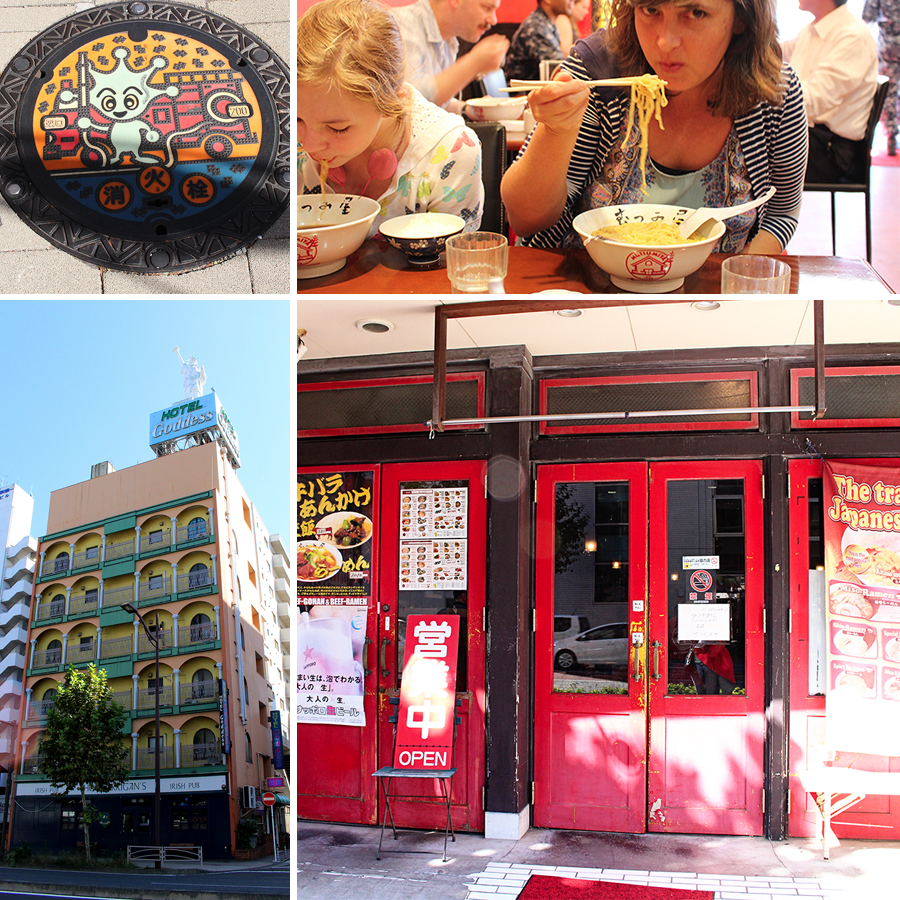 After our delicious lunch we took a walk to the nearby Mikasa Park, a World War II Memorial. It’s right across from the base and we had seen it during one of the drives around the base. 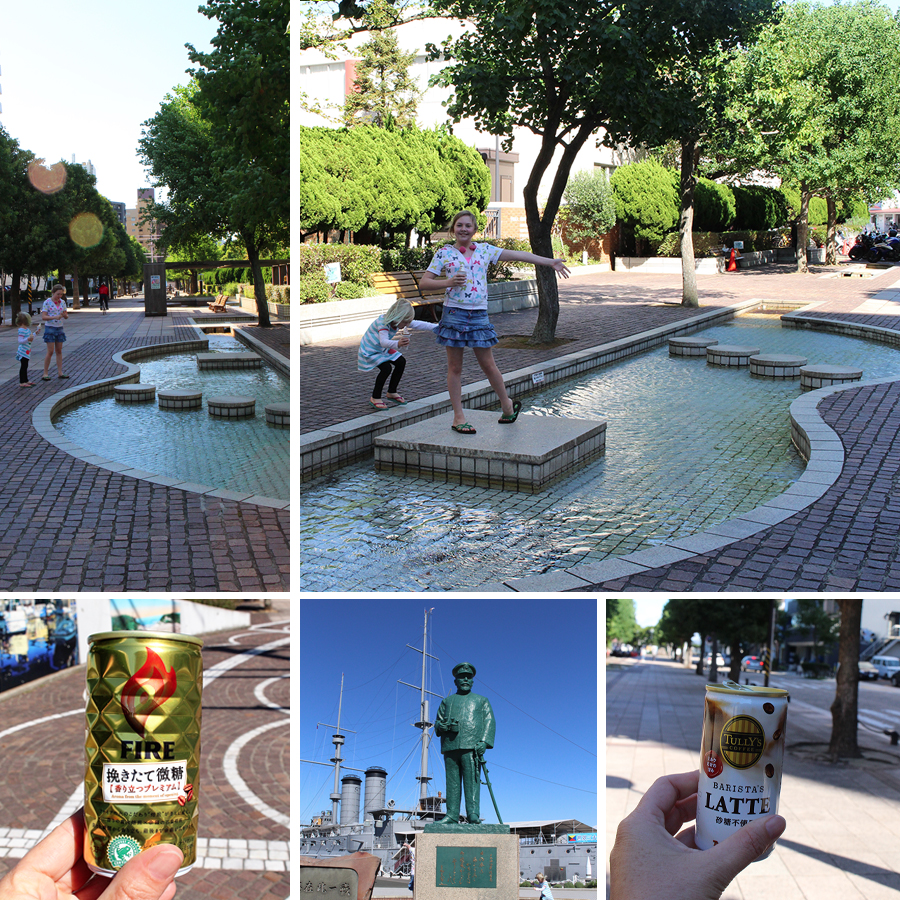 The walk there is really cool with water features the whole way. I was wishing I had a little sail boat that I could float along side me the entire walk. It was quite pleasant. Especially with a hot can of coffee as an after lunch treat. 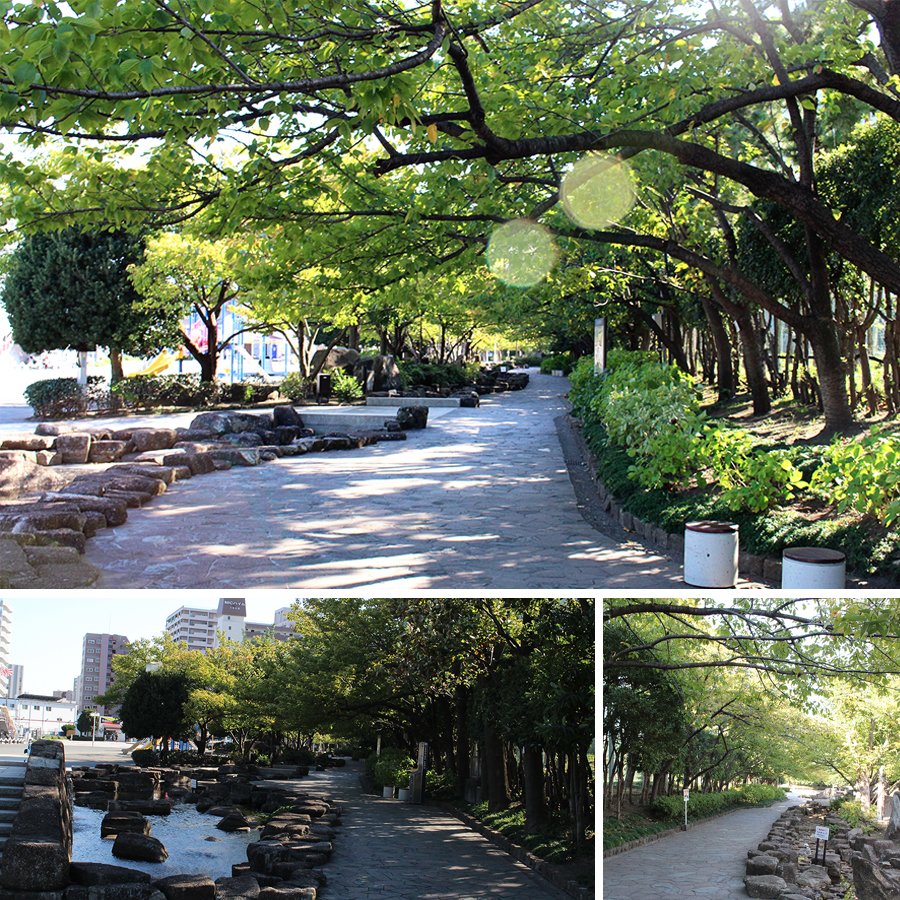 The park is quite pretty. I love the Japanese style of gardening. The way trees are trimmed to hang downwards gracefully over water and how rocks look like miniature islands along a coastline. It’s fun to imagine you are looking at a tiny scene of nature. Like our tour guide said, “Everything is better with imagination.” 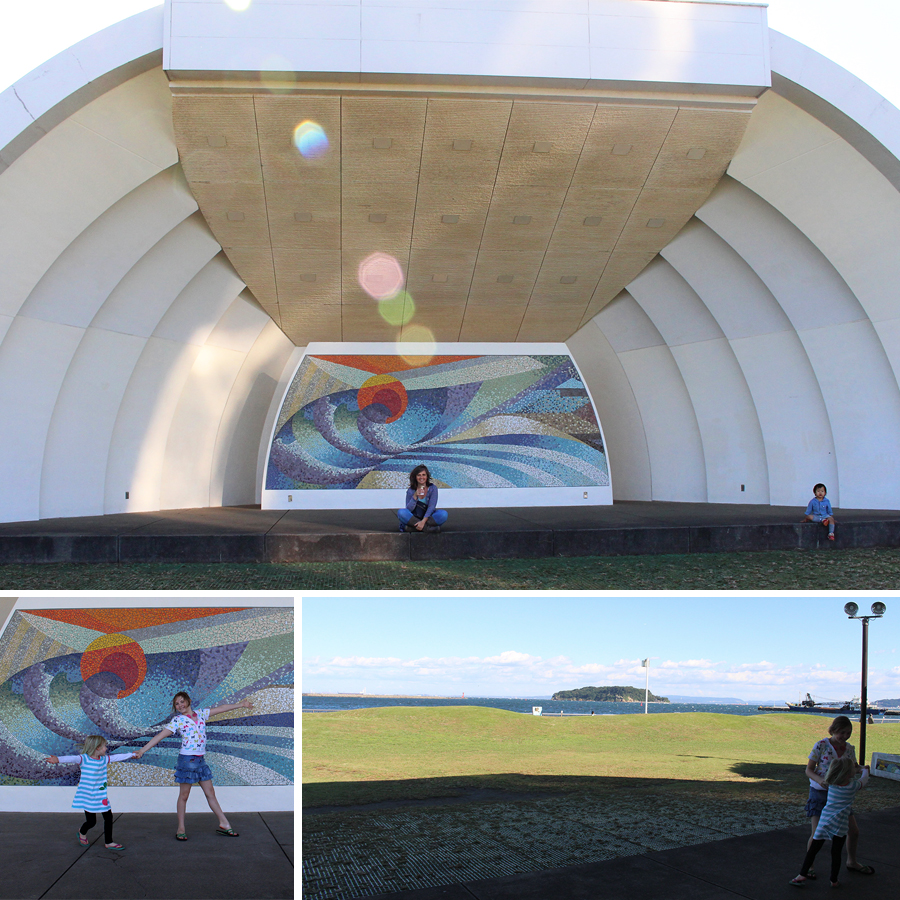 We spent some time goofing around the amphitheater. It had perfect acoustics. You could stand in the middle of the stage and whisper and people sitting on the grass can hear you perfectly. Even in the wind which was whipping up into a frenzy that day because there was a typhoon off the coast a ways. Nothing to worry about of course. Just a normal weather system that would peter out before it hit Japan. And there was a pretty mosaic that we all enjoyed taking pictures of and dancing in front of if you were Annalie and Elliora. 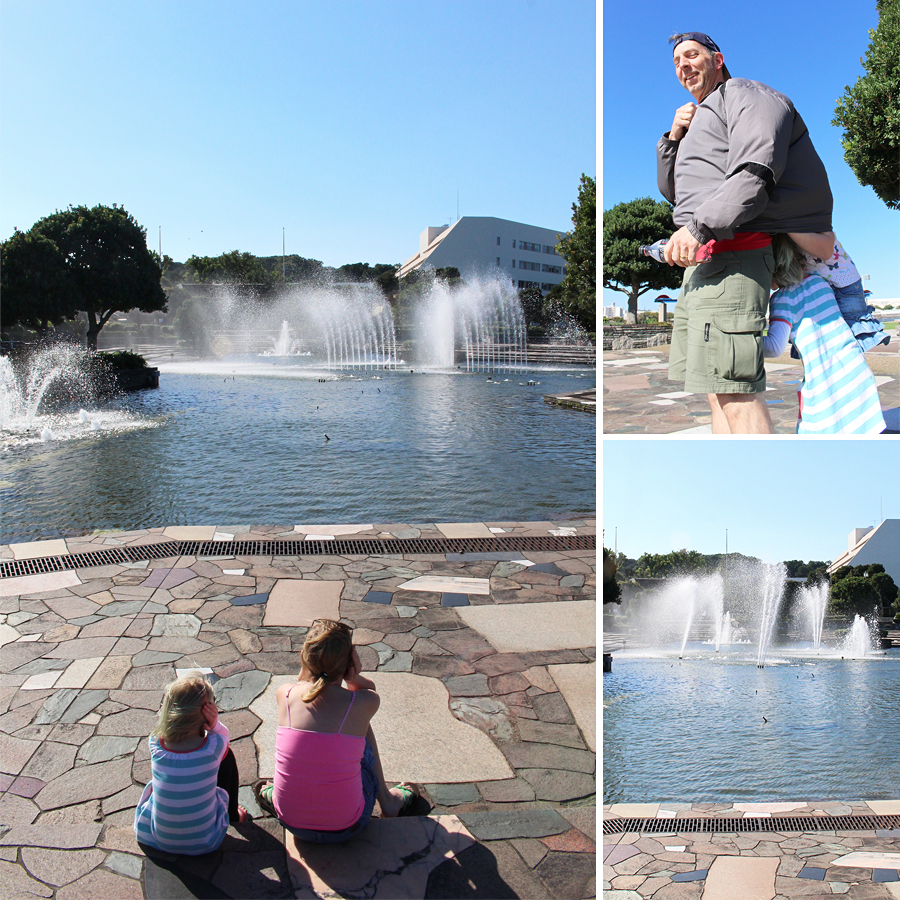 Then we enjoyed an impromptu Bellagio-esque water show. We didn’t even know it would happen but as we were looking at the pond, we noticed the fountain heads and sure enough Troy found a sign somewhere with times listed when it would go off. We took a seat and watched the show while an amplified music box played smooth jazz, pop songs and a few patriotic numbers from the bushes nearby. 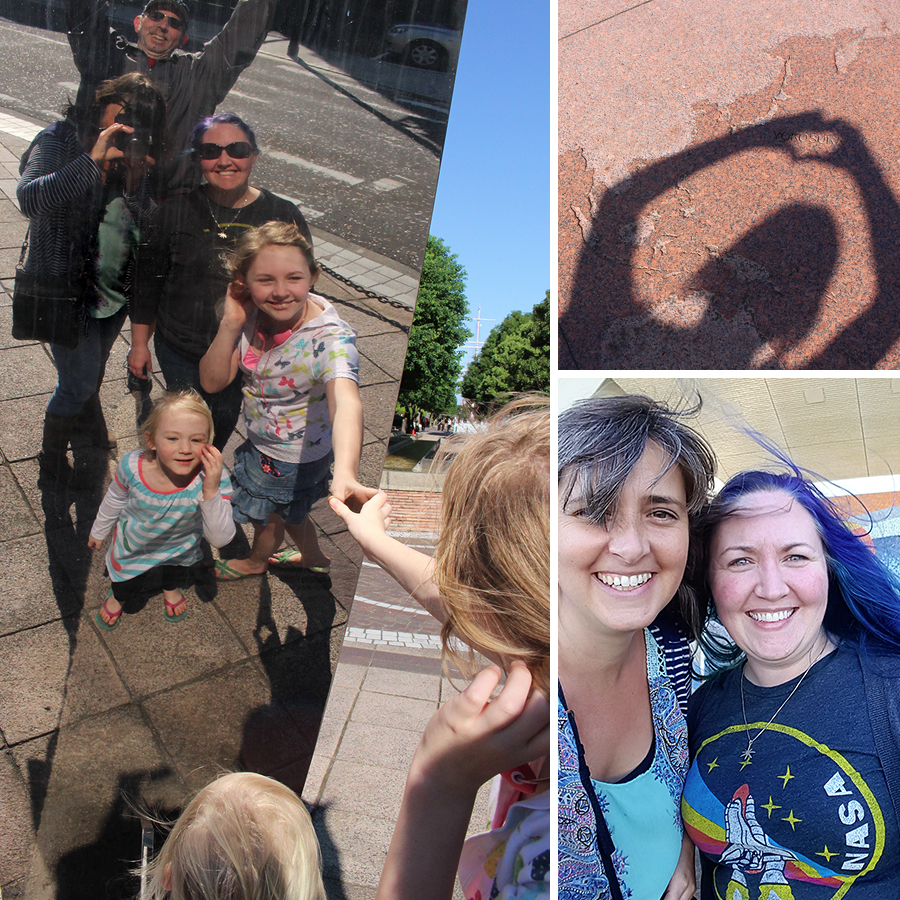 Then we walked back and took a group photo in this fun-house style silver sculpture that for some reason makes me look like I’ve gained 50 pounds in the stomach area. Avert your eyes now that I’ve drawn you attention to that, please.

Maybe not so much milk-butter-bacon ramen for me. Boo.