posted in preg-nuts, Secret Spy Stuff on December 1, 2005 by SAJ 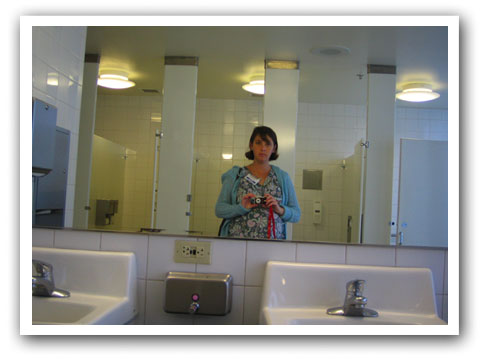 I had jury duty today. It was not fun. Surprise surprise. But not for the reasons you’d think. You’d think I was hating it because I’m big and fat and eight months pregnant. What could be worse on a body than sitting around and waiting all day long? But actually that part wasn’t so bad. I am at peace with my inner zen self. I can finally sit for longer than an hour without going crazy. Plus, I had a good book with me.

The part I didn’t like was the jury elimination process.

I got called to serve on a jury for an insurance fraud case. They called 60 jurors into the court room. From those 60 people, they would whittle it down to 18. That’s a lot of whittling. And whittle they did. They whittled whittled whittled like only lawyers can whittle. They asked all kinds of weird questions that made you turn your head sideways and wonder what kind of mind games they were really playing.

At first it was interesting. It was fun to learn that the girl in the cute turtleneck, knitting, was actually a graphic designer at a direct mail marketing company (what can I say, graphic designers always dress cool). It was interesting to hear an older woman tell a story about falling over a back pack at the school she works at as a principal. It was even fun to hear Mahmood ramble on for thirty minutes in broken English about how he once bought a used car and it fell apart in every imaginable way. All these little anecdotes from the various jurors were fascinating. It was like people watching on steroids. You just never know what people are going to say when questioned by a lawyer.

Then they got to me and it wasn’t fun any more. I hate being grilled. Mostly, I hate it because I have a mouse voice that nobody can hear and they have to ask me to speak up five million times like I’m some kind of shy daisy who’s afraid of her own shadow. Never before have I hated my soft voice as much as I hated it today. Not even that time when I was in a play in high school and the director made me scream my lines for three hours straight until I learned how to “project”. I hate my mouse voice. I hate being soft spoken. It’s not who I really am, it’s just the way I come across.

The thing is: to me, inside my head, I sound strong and loud and competent. In fact if I speak up, my voice sounds aggressive and grating to myself. I don’t know why this is. I was born this way. It’s not like I hear everything more loudly than it is, just my own voice. Maybe my eardrums are located too close to my voice box. I have no idea. This is something that has plagued me my whole life.

You can imagine how stupid I felt when the judge had to admonish me twice to speak up. And then to make it even worse, he had to explain to me why it’s important to speak up as if I was a first grader. I hate feeling stupid. Hate it. Hate it. Hate it. I spoke as loudly as I could and made sure I was facing the court reporter as I mouthed every word as clearly as possible. It was a crappy experience. I could feel myself sweating from the stress of being the center of attention. I was so focused on speaking loudly and trying to be concise that I gave lame answers to their many questions. I really regretted that I even raised my hand to volunteer information in the first place. Why can’t I just play dumb?

The truth is, I didn’t think I could be unbiased in this insurance fraud case. They asked us to raise our hand if there was anything that might influence the way we would vote as a juror. I couldn’t lie. My brother has been involved in a workman’s comp case and I feel like he got screwed by the system. He lost his job, he lost his home and now he’s living at my mom’s house, barely making ends meet. I know zillions of dollars are lost every day because of insurance fraud, but I also know that a lot of people are down and out and suffering because everything is tied up in legal red tape. So the truth is, I’m biased.

I spoke up and it was horrible and eventually I got kicked off the jury. Which is actually a good thing but I’m still kind of smarting over it. 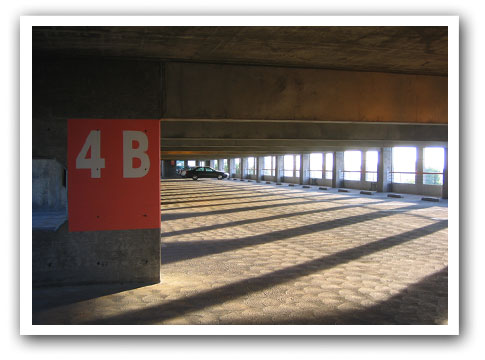 (I only took two pictures today. One of me in the bathroom, because the nice light surprised me and the other is the parking structure that I had to walk to once I got eliminated. The long shadows looked pretty to me.)