It was sunny went we rode the train out to Versailles. We had visions of gardens and water fountains dancing in our heads. Our tour guide said today was the prettiest day she’d ever been to Versailles. I should have taken it as a warning when she said she’d been to Versailles in wind, rain, sleet and snow but never a sunny day like that day. Because a sunny day it did not turn out to be!

Which is fine if you like to be inside gazing at the opulent palatial rooms. But we let ourselves hurry along with the many tour groups because what we really wanted to see were the gardens. Many of us are gardeners of sorts and we were amazed, looking at the map, how big the grounds were. We didn’t want to waste a minute trying to figure out who’s room was who’s. Once you’ve seen one grand palace, you’ve seen them all. Oh the sacrilege! I know as I type this some student of French history is shaking their head and vowing never to read any posts from my ignorant blog again.

We rushed down the scarlet carpeted stairs, past the gift shops and huddled tour groups by the door. We flew out the doors trying to find out how much the garden tour cost and when we looked up from our maps what did we see? Great big gray blue ominous clouds approaching!! In fact it looked like a twister might touch down. Suddenly the wind whipped up and I could barely make it from one shelter to the next. A storm was definitely going to throw a wrench in our plans. Umbrellas popped up out of no where and people ran out of the rain from all directions. The wind was so heavy that it blew over some heavy metal traffic dividers a film crew had put up to keep the crowds out of their scene. Their orange and white striped plastic keep-out tape was flapping in the wind. I wonder what movie they are filming*.

Instead of going back inside the palace and taking a more studied tour we some how made it to the hall of government or something like that. It was a long hallway with many many many busts of important people in government over the centuries. I think we ended up there because it’s the only place that had benches. The older ladies needed benches… and maybe I did a bit too. 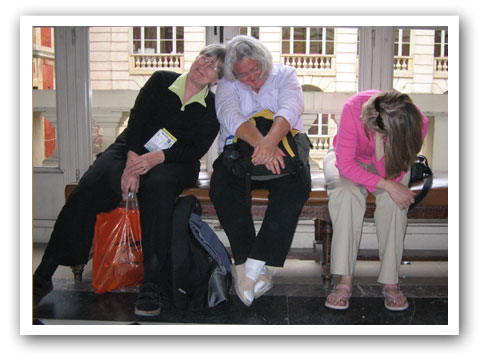 Then things got interesting. As you can see from this picture we love Versailles.

In fact, I got so bored I started playing with my camera as a toy. Gotta love that. The last two fuzzy frames are me acting like a maniac in my blue sweater. See, I told you it’s perfectly okay to just go crazy here in Paris!

*We’ve seen a couple of film crews. One on the Seine and one at the Louvre and we hear that they are filming the Davinci Code in the Louvre at night. How exciting is that? Wouldn’t it be cool if I made it into the movie as some speck of a tourist somewhere?

**How’s the loading time on this page? It has crossed my mind that having so many slide shows must be making things slower than molasses. But I figure the people who are reading either have a fast connection or the patience to log on and go make a cup of coffee or something while they wait.