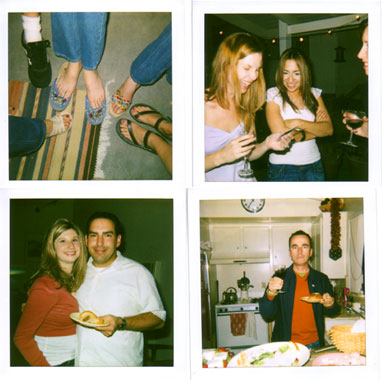 The fuss about Paris is finally over. I’ve officially taken down my six foot Paris map. I’ve washed and dried and boxed the last wine glass from last night’s party. With a sense of bittersweet conclusion, I am wrapping up my obsession with all thing Parisian and bidding the creative movement a respectful au revoir.

So how was the Post Paris Party? It was great! I think I scored an A- in ambience (the red light bulbs totally worked!!! Thanks dayment), a B+ in food (actually my mom gets an A+ in food because the Croque Monsieurs were delicious! But I scored a D- in kitchen clean up and that brought the overall food grade down a bit) and maybe a C in guest attendance. I would have gotten a D in guest attendance because about four people turned up MIA, but one of my very most favorite bloggers drove here ALL THE WAY FROM NORTHERN CALIFORNIA!!! Now that’s dedication.

She not only gave me extra credit points in guest attendance but she totally made up for the people who just dropped off the planet after they rsvp’d. (Isn’t that weird when that happens? I hope they are okay.) Normally, I wouldn’t notice but it was a smallish party and I didn’t want Leah to drive all this way and then think I’m socially retarded. But I didn’t have to worry because there were just enough people to fill every chair and at one point, all join into the same conversation at once. That was cool. Plus, Toby was way more comfortable with the crowd issue being under control. He and I differ on the whole “the more the merrier” thing. It was perfect actually.

It was such an honor and a privilege to finally meet Leah! My first impression? She is so tall! Like model! And drop dead gorgeous too. I mean, I knew she was pretty but I never expected a super model to come to my party. I gotta say it: she’s smart AND pretty! I think her ex-fiance needs his head examined. I should probably stop going on and on because I know she’s going to read this and then she’ll feel obligated to write something really complimentary about me. As it is I’m waiting for her blog post as if were an opening night restaurant review. We’ll see if she’s honest and reports on the cat puke.

I think I pulled it off though. It was a bit sketchy in the beginning. How is it that no matter how much you plan and no matter how early you start preparing, guests will always arrive before you’re ready? Nobody was early early or anything but I just didn’t have my sh– together. I really got ambushed with the whole setting up of the projector. Which is totally my fault because I could have been planning out the cord issue and such, so many days ago. The Things (the kids I babysit) came over exactly at the same time I was setting up the very expensive borrowed projector. It was scary. There were cord issues and instability issues and add little feet running and jumping… I nearly had a heart attack.

Earlier, when my trusty Audio/Video friend came over with the projector, he gave me very specific instructions to make sure no one bumped it or the table it was on OR spilled anything anywhere near it. He told me that if I broke it, I would have to replace it because it belonged to a friend of his and apparently it was the best on the market AND it cost two grand. Yikes! No pressure!

The projector was the best though. Without it, the party would have been snoresville. It was really fun to see all 677 of my Paris pictures up there on my wall while my very own sound track played. Maybe I’m being partial, but it was my dream Paris Party come true. Outside of hiring my own squeeze box player from the metro, it was as close as I could possibly come to bringing Paris into my living room. With the red lights and the cool summer breezes coming through our wide open windows, I was temporarily a French girl again.

After I got the projector safely tacked down and cords covered with a durable rug, I was able to focus properly on the Things. They were adorable, the darlings of the party really. Thing One drew me a picture of the Eiffel Tower and greeted me with a hearty “Bonjour Mademoiselle!” that nearly cracked the cute-o-meter in sweetness. She must have been practicing in the car ride over. Thing Two loved his toy Twingo car that I got him and made himself quite comfortable with the girls on the patio. He’s a little flirt. When the Things left, Thing One kissed me on both cheeks, properly Parisian style. I love those Things. I totally forgave them for all the running and jumping and yelling and helping a little more with lighting of the candles than was probably safe for a four and three year old.

The sad thing is: I was so busy being hostess and party girl, talking my head off about Paris, that I didn’t take any pictures! Stupid me! I insisted on using real dishes and not paper and plastic (cause that’s so disgustingly American) so there were several times where I was a bad hostess doing dishes in the kitchen instead of mingling like I should have been. We did bring out the polaroid camera and played around with that, but most of the guests took their snap shots home with them so all I have left to post are the rejects. Thank goodness my mom took a minute away from sweating over the stove in the kitchen and snapped a quick shot of me and Leah. See she really was here! How cool is that?!!! 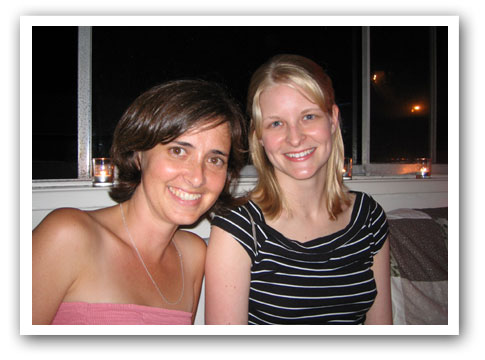 I took some shots this morning of the left overs.

Until next time Paris!