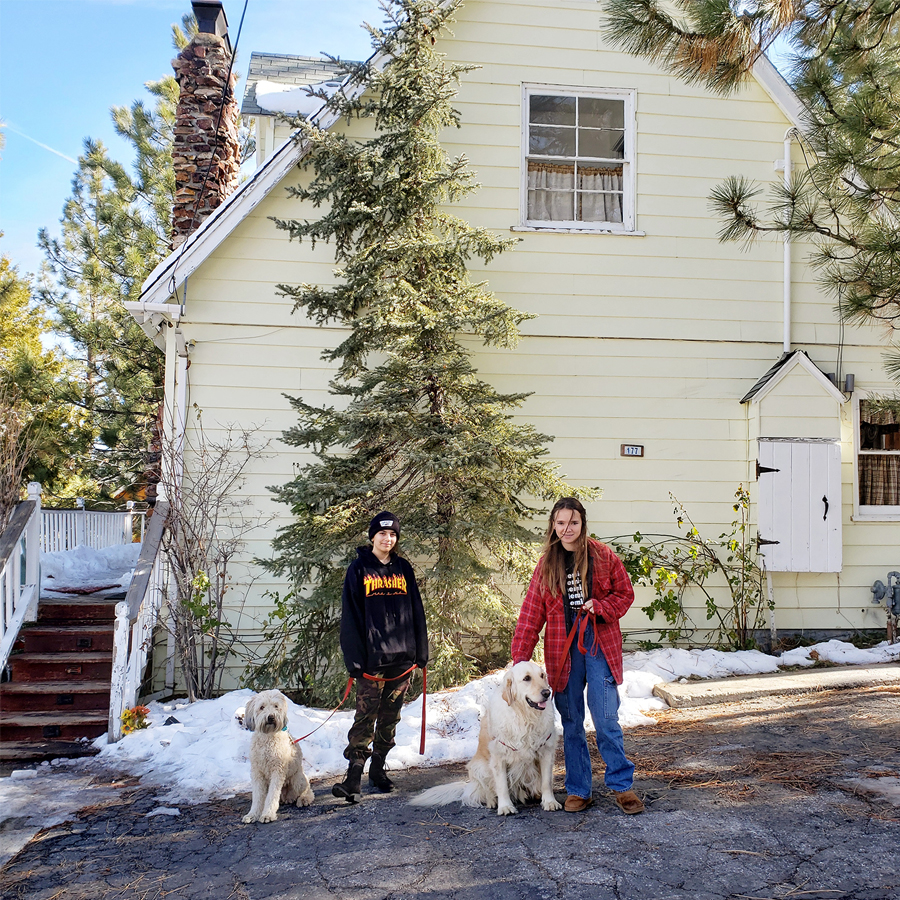 We just got back from the best little mini-vacation in the mountains. Last year we didn’t do anything during winter vacation and even though it was nice to stay home and save money like good little entrepreneurs, we did kind of regret not going up to the snow. You know how it is when you start looking at everybody’s snow pictures on instagram and you start getting jealous… Is that just me? Maybe it’s just us Southern Californians who don’t ever have to deal with mud and slush…anyhow, I LOVE SNOW. I really love it. And I really love taking pictures of it. As you will see. 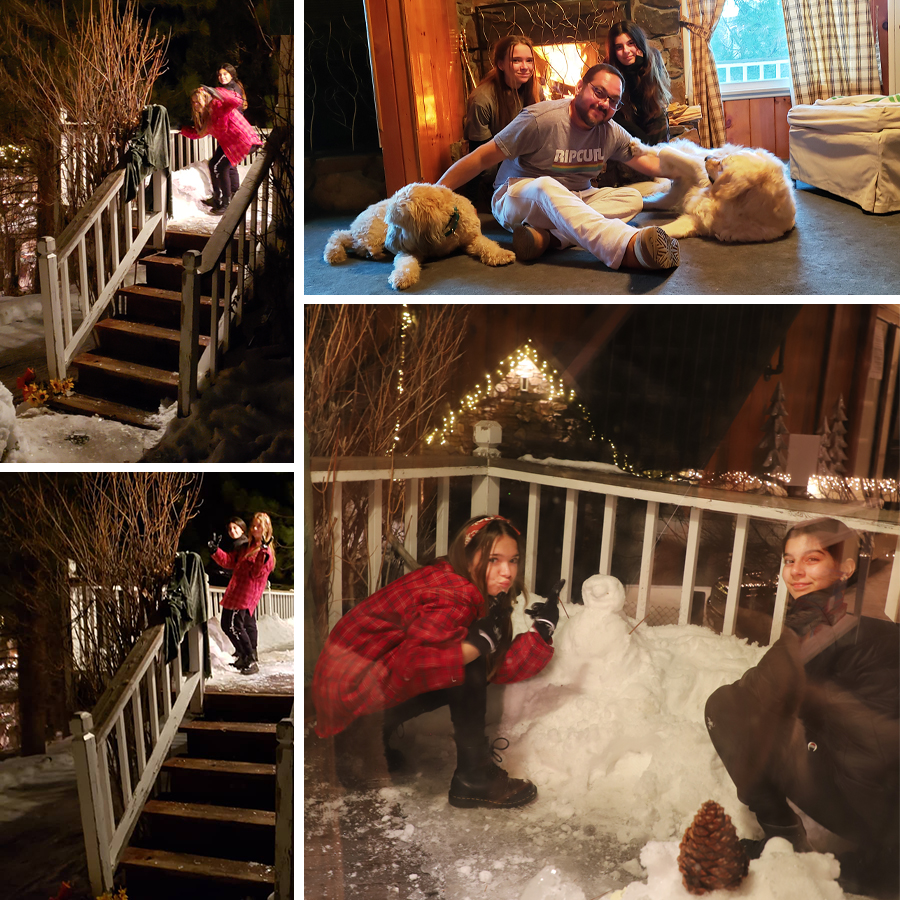 This year we booked a little cabin. It was pricey but I don’t regret it. I feel like it was worth every penny. Especially as the girls get older and we have less and less face-time with them. It was the best for making memories, even if forced at times. 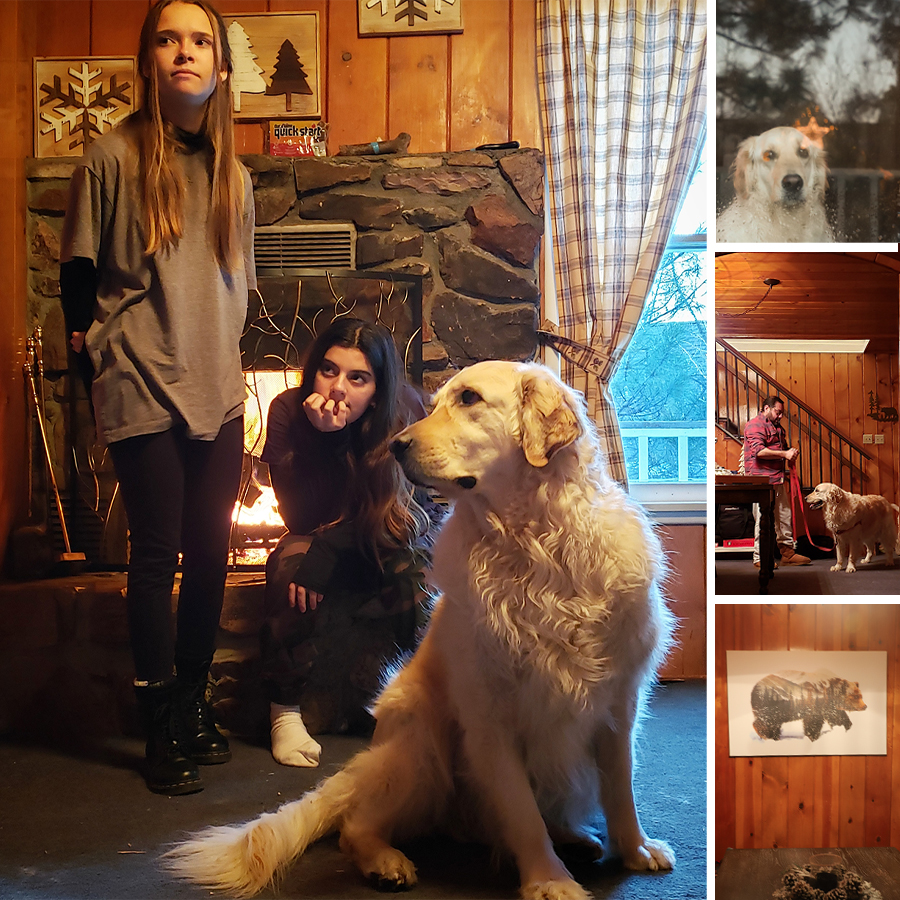 Our cabin was small but it was super cute. It only had one bathroom, which was a little challenging at times but it was perfect for us and the dogs.  It’s hard to find cabins that are pet-friendly and not completely disgusting so we were really happy with it. It wasn’t on the waterfront but it was close, like really close. You could look out the window through the trees and see a sliver of icy blue and then if you were up for a little slip-sliding-away hike, it was just a hop, skip and a tromp down the hill.

I love the picture of the girls above with Cody. They were looking at the TV when I snapped the shot but as Gingermog said, it could be their next album cover if they ever decide to go on the road together musically. Which by the way, is quite frustrating to me. They are both talented musicians but they refuse to play together. Every once in a while I’ll catch them harmonizing some meme-song or commercial jingle together but they won’t do it in front of me. I’ve got some stubborn kids. 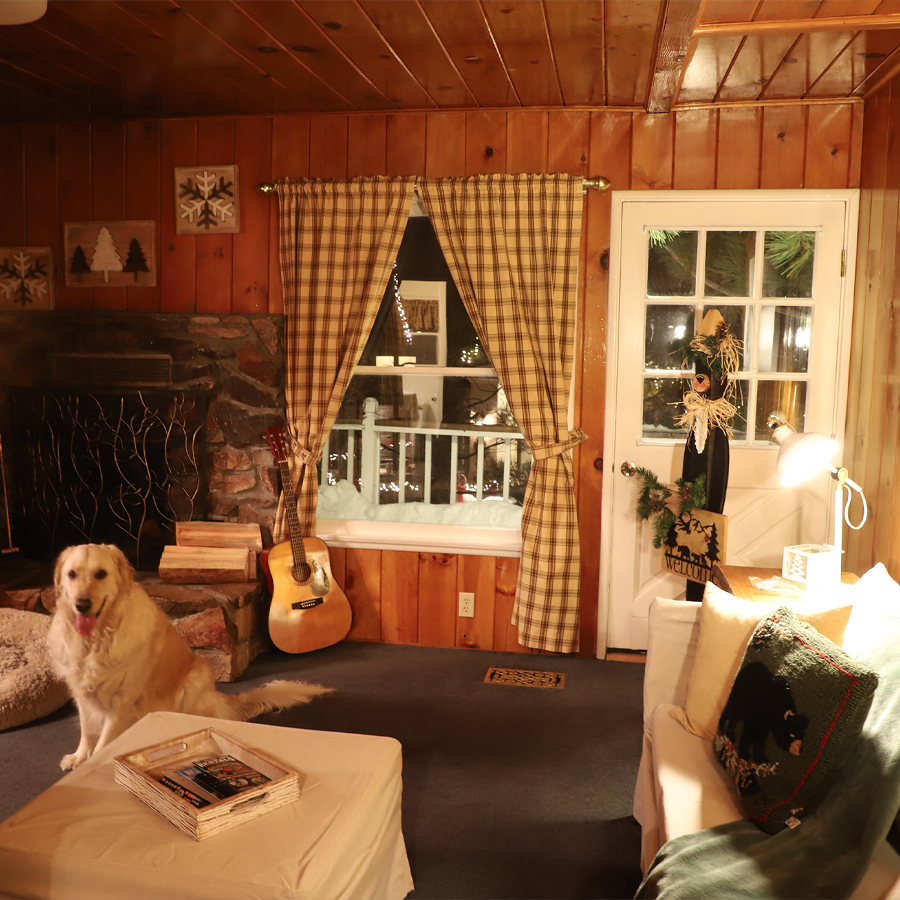 Anyway, super cute cabin, right? There was even a guitar! Not that anyone played it, sadly. AND there were two fireplaces right next to each other. Dueling fireplaces. It was a really weird layout. Maybe it used to be two units that they combined, I don’t know.  The kitchen was decent too and I cooked several meals there, probably saving us hundreds of dollars and quite a few headaches dealing with the town crowd. 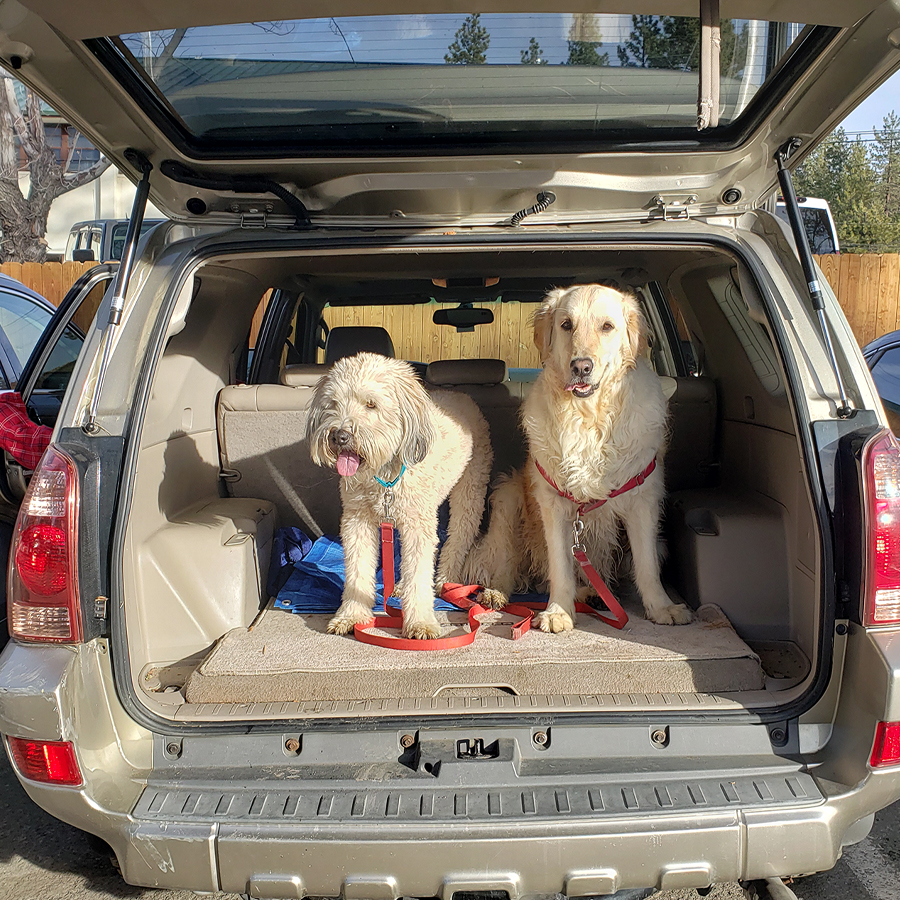 Did I mention we brought the dogs? This complicated things quite a bit but it was SO FUN! They love going in the car and they love going wherever we go. They’d never been to the snow before and just liked we hoped, it blew their little furry minds. 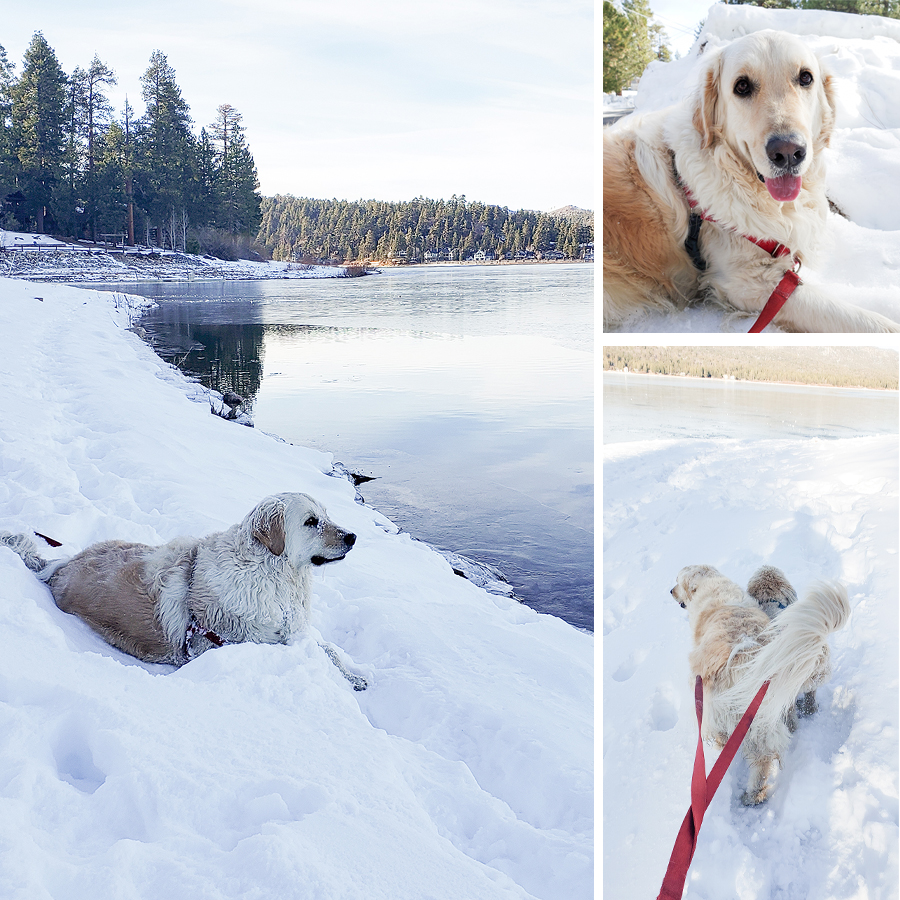 I mean, I knew Cody would like the snow. He likes all forms of water but Whiskey? He practically went spastic with joy! 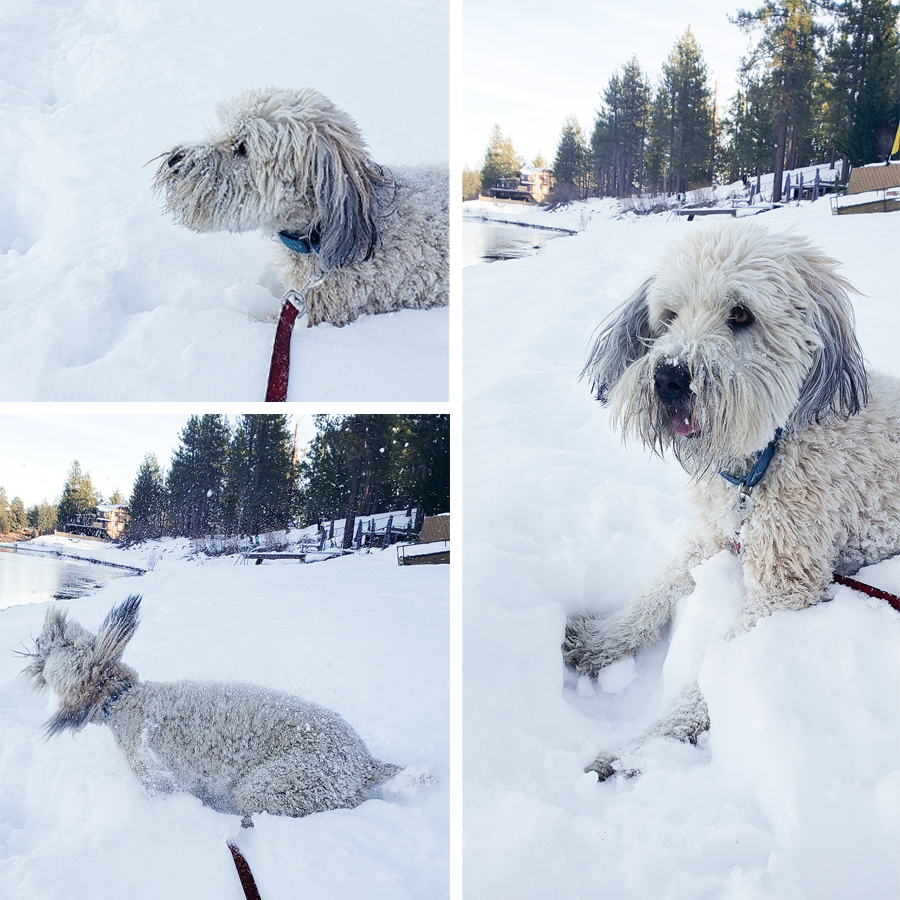 He buried his nose in it and rolled around like he was the happiest puppy in the whole wide world. Dogs in snow is an amazing antidote to the wintertime blues. Not that I’m suffering from them but if I was. I seriously wish I could buy my own cabin and go up there half the year. It was just amazing in so many ways. 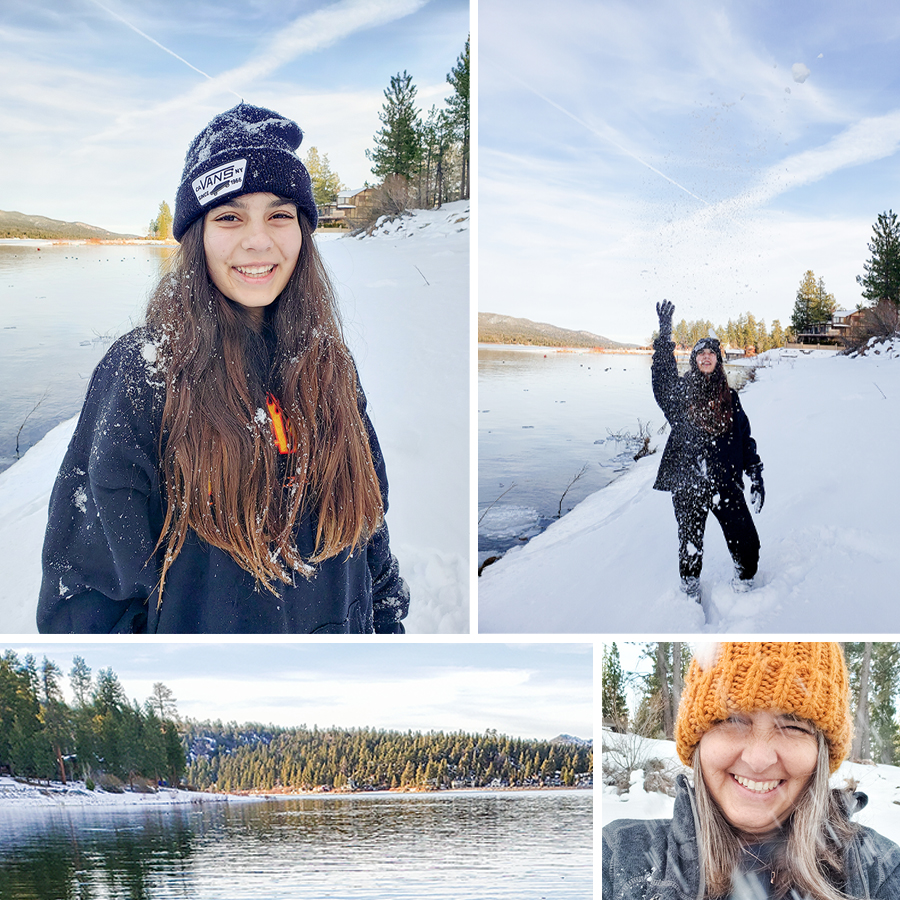 Joon and I were the first to really hike around and explore the lake nearby the cabin. Unfortunately Bug got a case of what we thought was altitude sickness but turned into a full-blown chest cold. She was not feeling the snow or the cold weather or the altitude at all. Even walking up a small hill had her out of breath and complaining that her lungs felt like they were collapsed and full of tiny icicles. 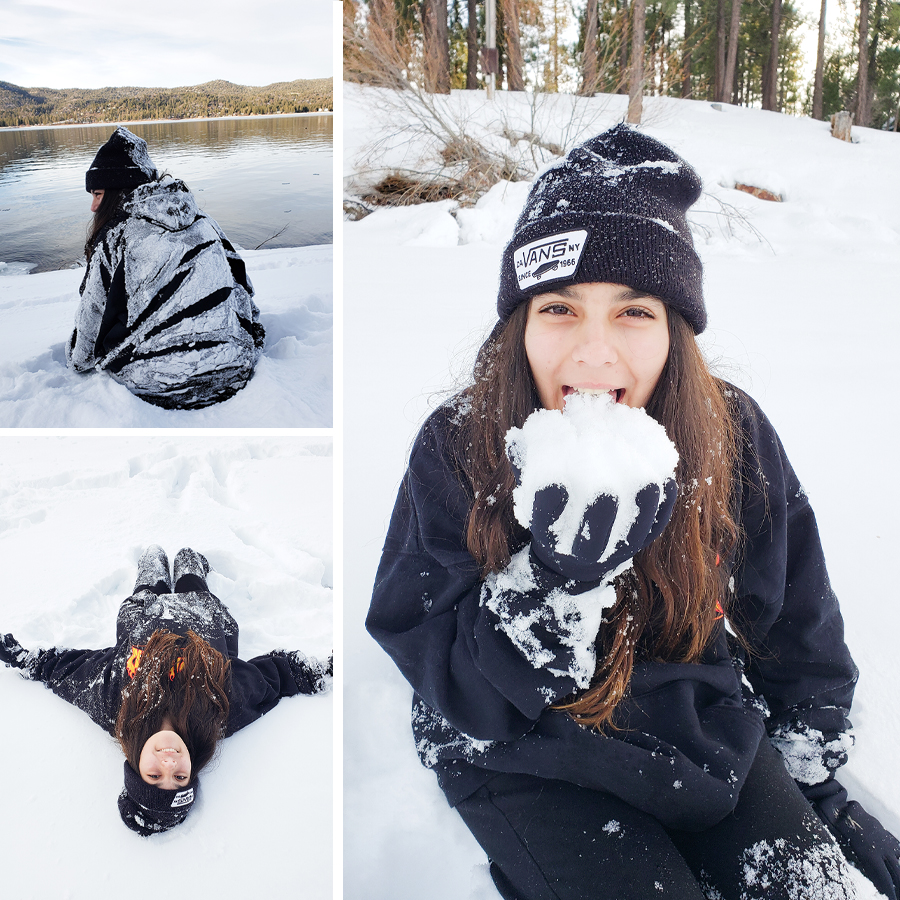 So Joon and I made do and took a few zillion photos just the two of us. 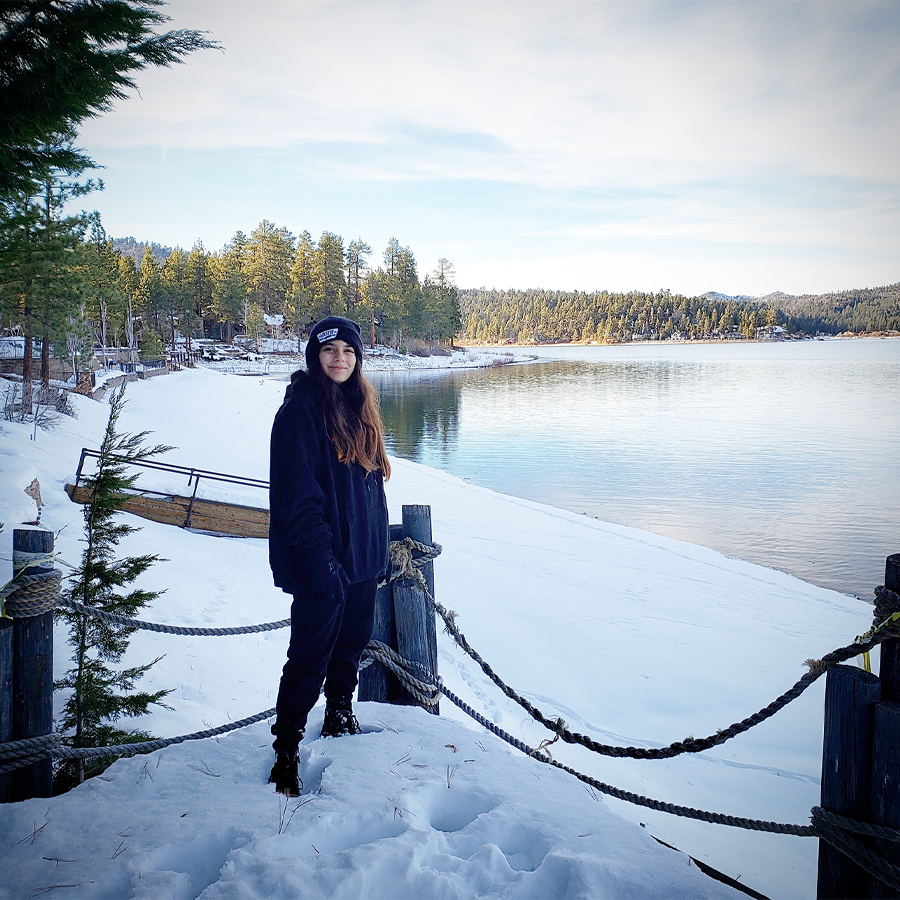 It’s so pretty up there! 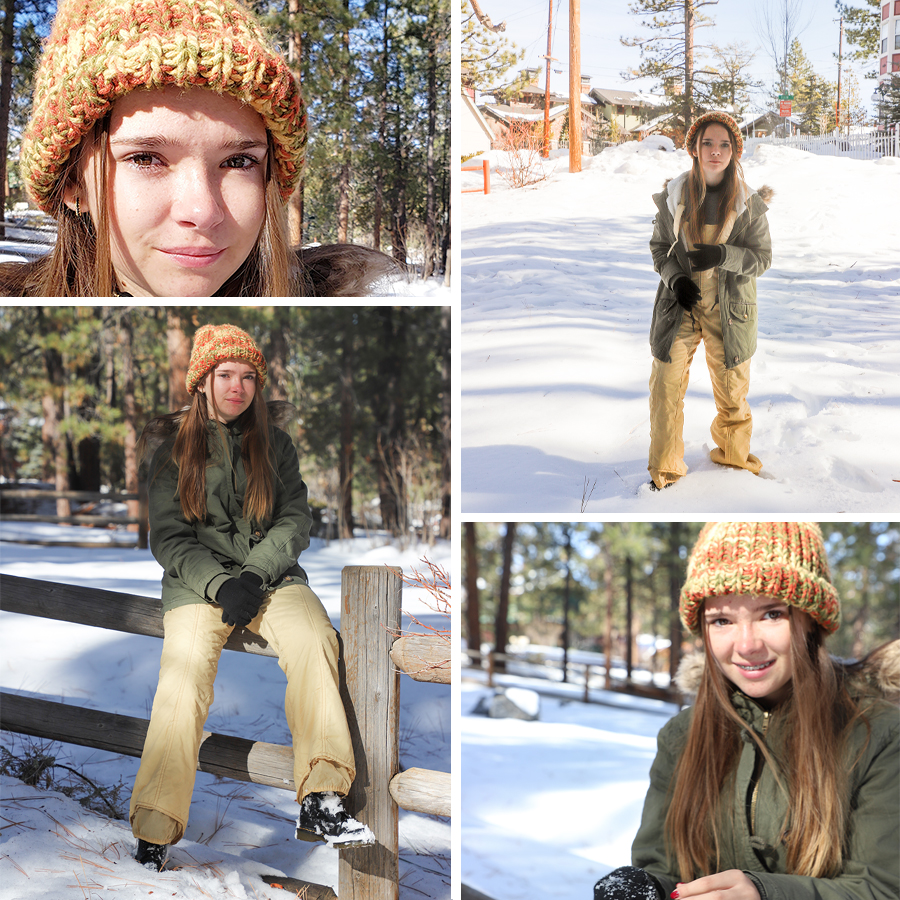 After a day Bug forced herself to get dressed in snow clothes and we took a few photos in the neighbors yard. She was a good sport even though all she felt like doing was burying herself in her sleeping bag. 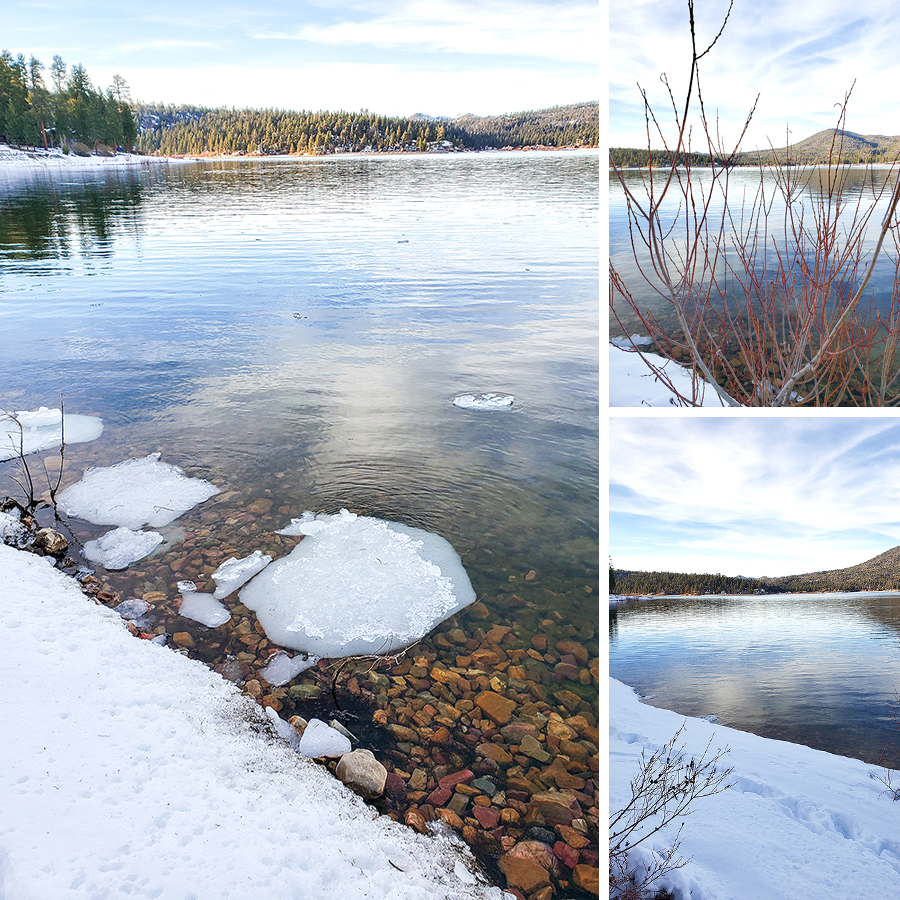 As you can see it was really cold. I mean, relatively, for us thin-blooded reptilians. 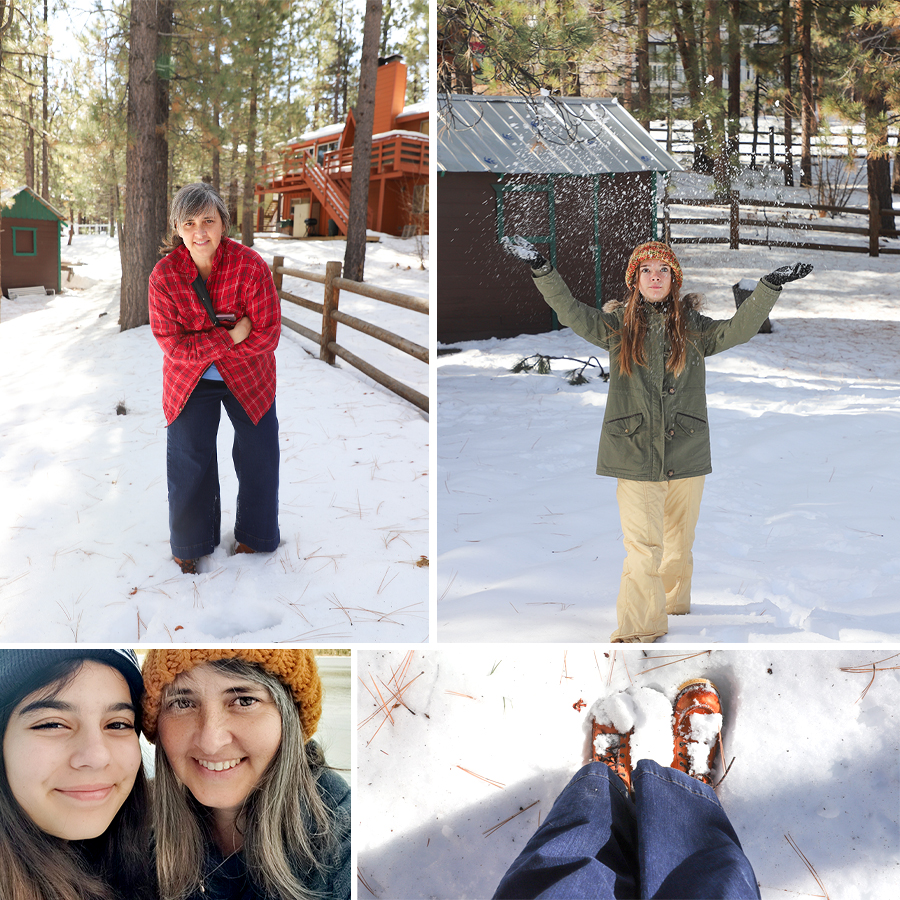 Snow, snow, snow! Are you tired of looking at pictures of snow yet? And these are just 1/200th of the photos I took. 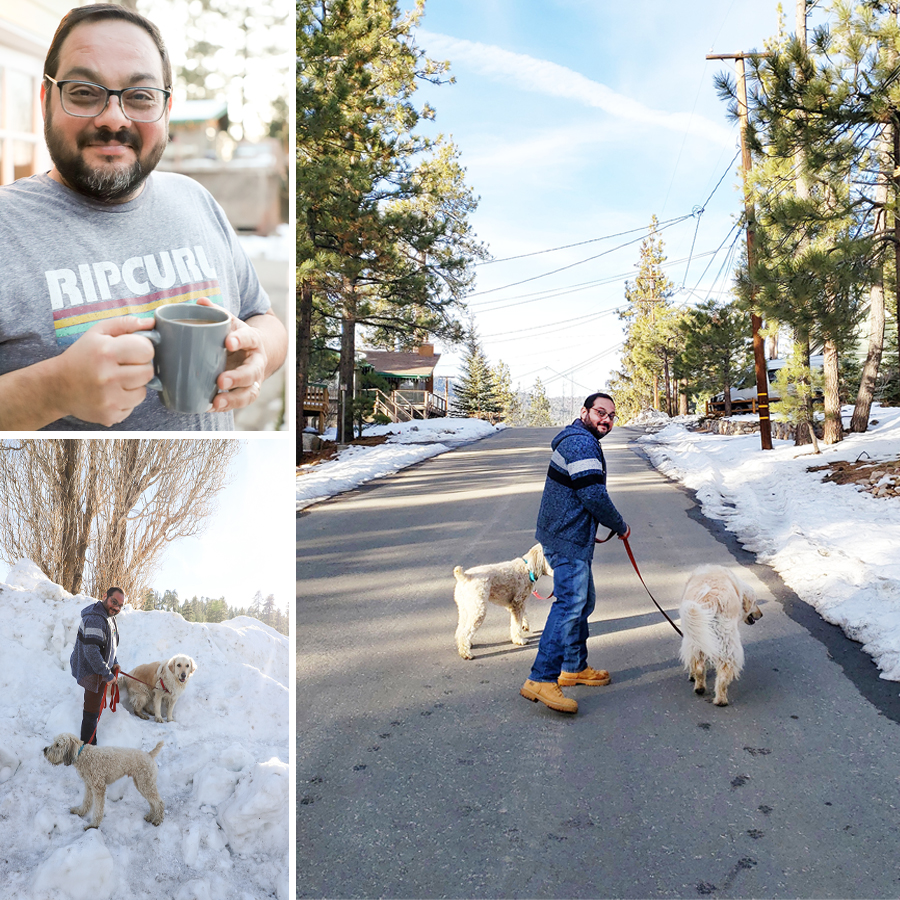 Payam enjoyed his time too AND he did not fall and break his head open this time like he did that one time at Noon Lodge (omg the girls were so little then!!) He did actually slip on black ice when we were tying up the truck with our luggage but thankfully he was holding onto the rope we were tying and he saved himself. That black ice is treacherous! We had these really cool strap-on ice cleat things but we forgot them at home like the geniuses we are. Man, those would have come in handy. Yes, I am adding them to our packing list for next year. 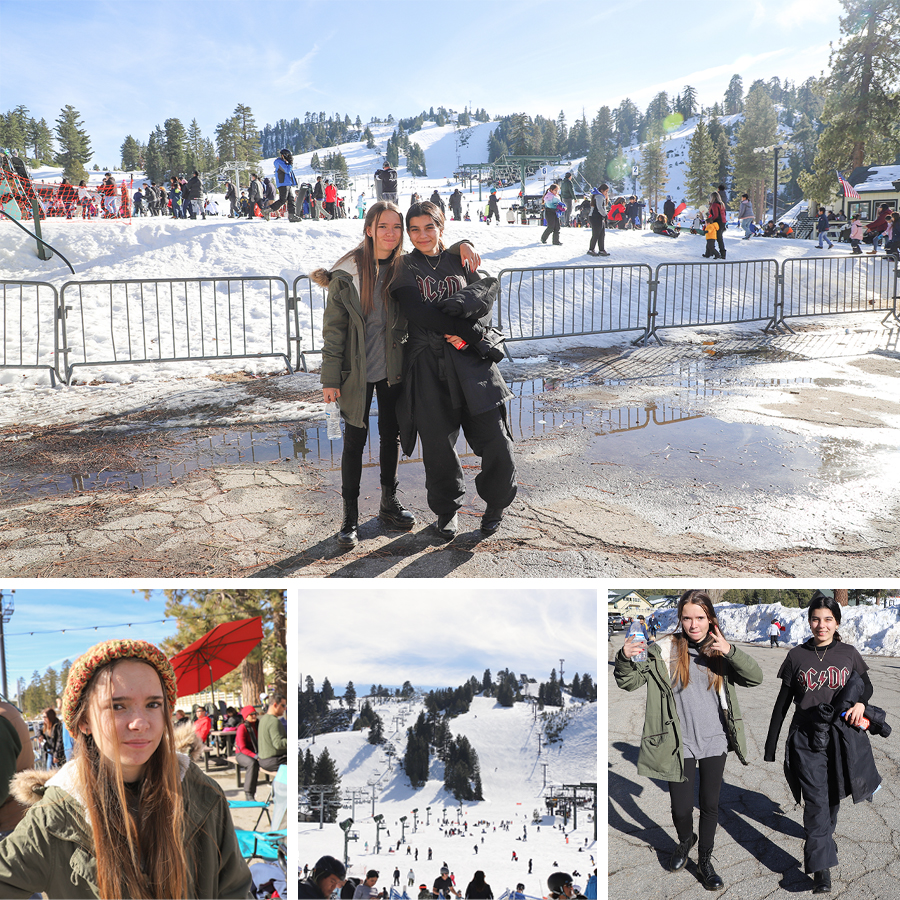 Speaking of treacherous falls, let me tell you about my fun little snowboarding experience. I’ve snow-boarded before (once about 30 lbs ago when I was in my 20’s) so I thought I’d take Bug’s ticket (since she wasn’t feeling up to it) and take a newbie lesson on the bunny slopes. I mean, how hard could it be, right?

Well, I guess my weight, lack of muscle tone from skipping work-outs for two months and overall anxiety about falling and breaking something has really put me in a bad way. I took two slides down the tiniest slope (with only one foot attached to my board because it was step-two of lessons) and totally wiped out. The board flipped around (swingy scooter style) and almost sliced my left boob off. Yes, I’m not even kidding. If this wasn’t a PC-rated site I would post a photo of my purple and black boob. It hurt so bad I thought I had actually cut my boob off but thankfully my skin was not punctured and I didn’t break any ribs. All I have to show for it is a massive bruise that no-one can see because I’m modest. Just believe me, it is nasty. Thankfully it doesn’t hurt anymore (unless I touch it) but when it happened I almost cried. I think a few tears did leak out actually.

At that point, even though I didn’t want to be a quitter, I did quit. I asked the instructor if I could stay on the mountain sans board and just take photos of Joon and he said I was more than welcome to. I mean we did pay $100 to be there after all. Even though it seems like a big waste of money I’m glad I gave up. In a way I feel like I dodged a serious injury. I saw the medics take two people down the hill in the two hours I was there and one of the girls in our lesson group broke her wrist. So quitter-schmitter, when you are 47, you just count yourself lucky. I think I will try to get in better shape and try it again next year IF I’m feeling really strong. 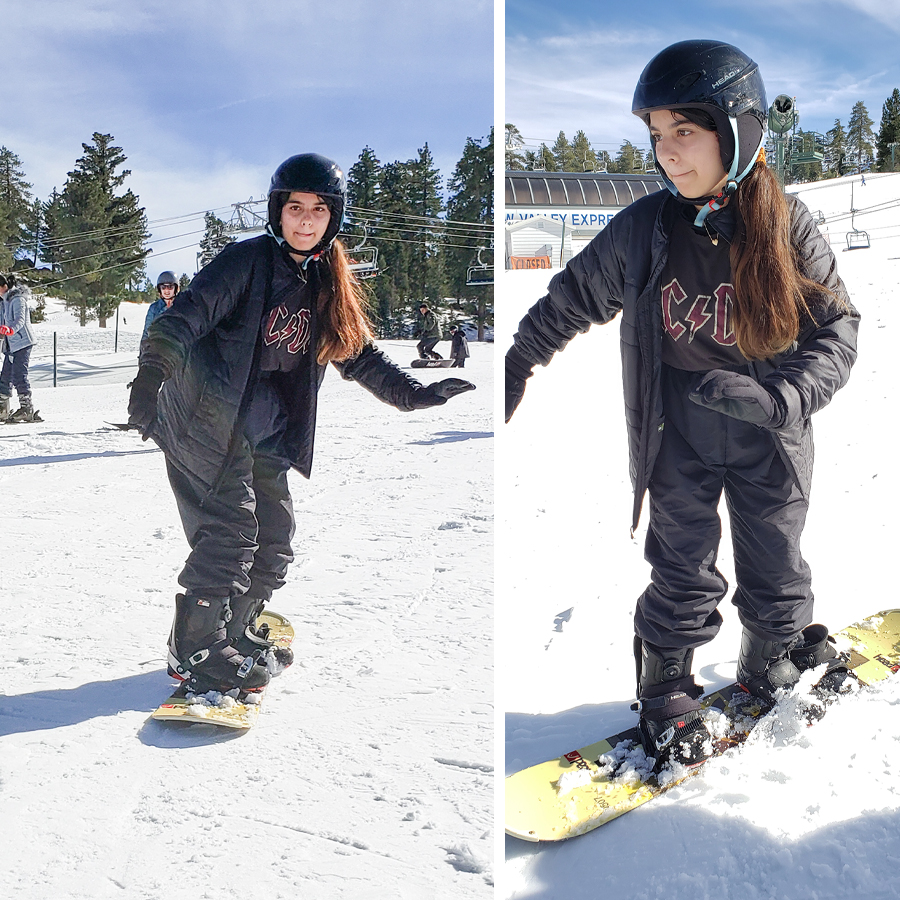 But I did get this money-shot of Joon snowboarding. A literal money shot since it cost Payam $100 for me to be there. I would have taken more pictures but she went up the chair lift and I couldn’t find her for the rest of the two hours. People look like identical black specks in the white snow when you are staring up at the white slopes.

That day was hard. I was really glad to go back to the cozy cabin and nurse my wounds afterwards. 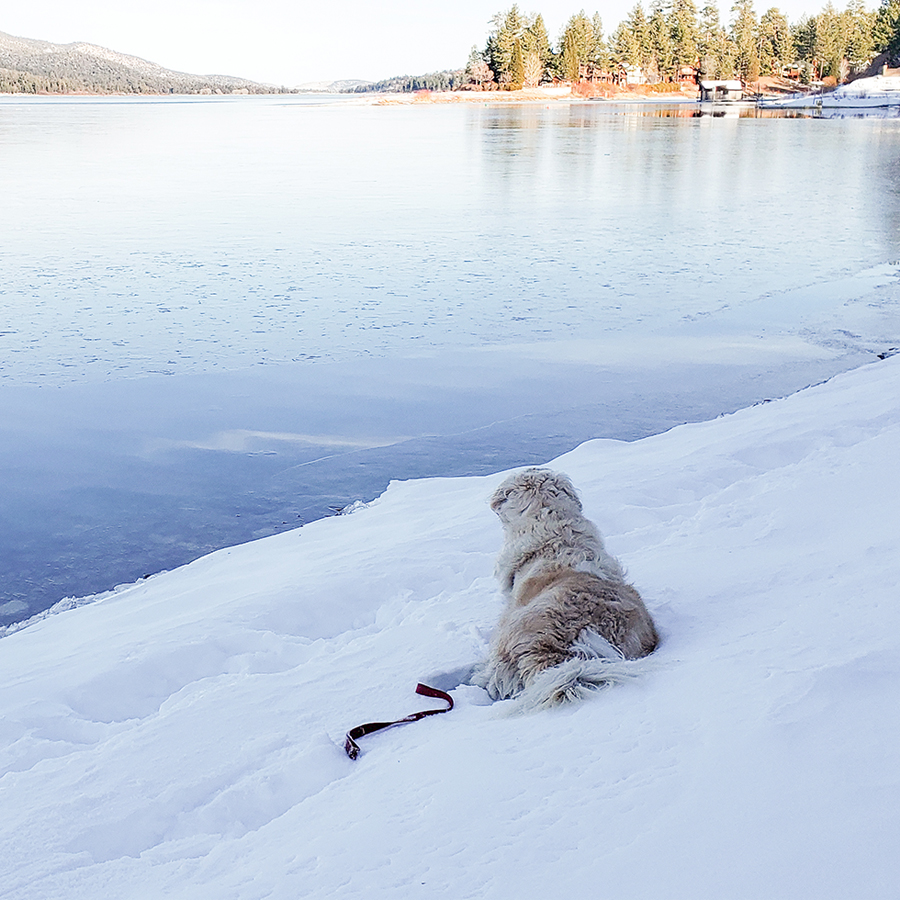 I think I’ll stick to photographing the snow for now.

In other news, I have made the changes you guys so kindly showed me and the new SAJ Calendar is here!  Thank you so much everybody! Sorry it took me so long to finish, but as you can see I was having some fun in the snow. :P 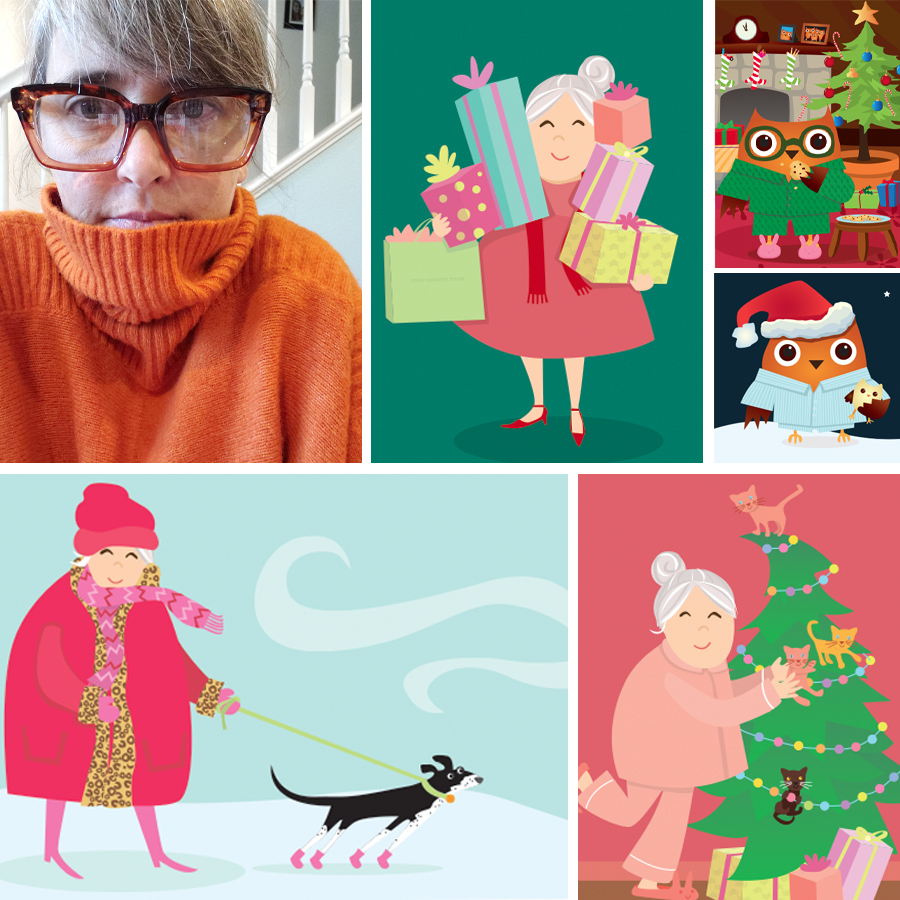 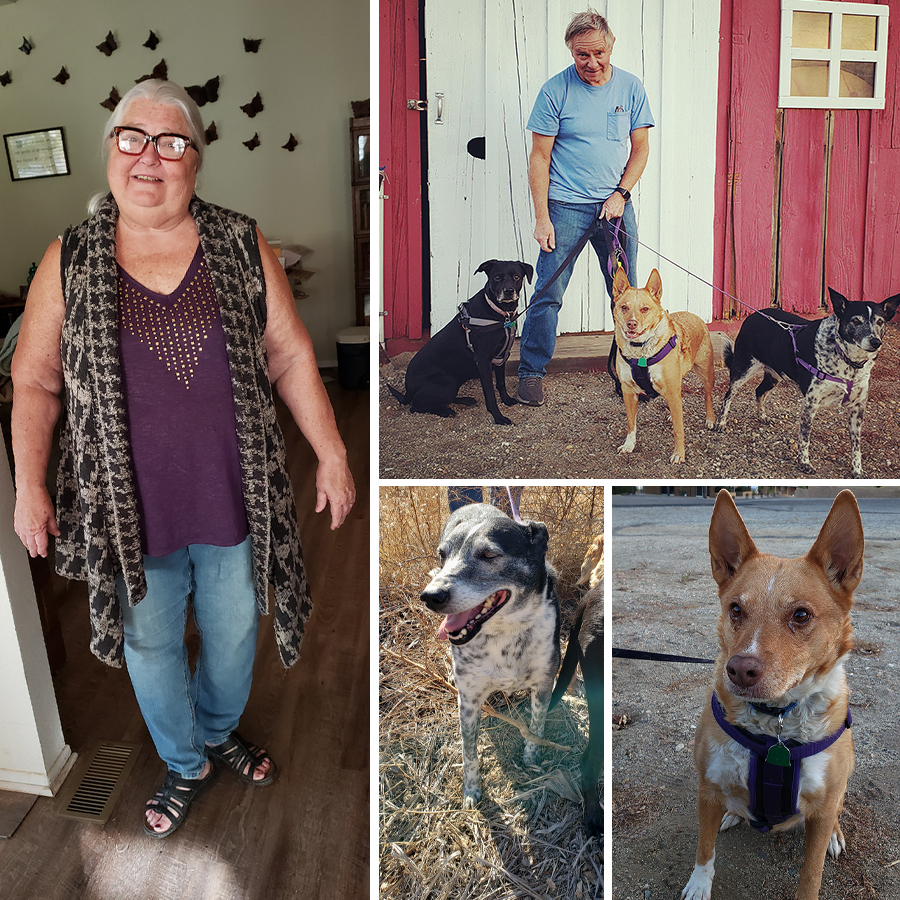 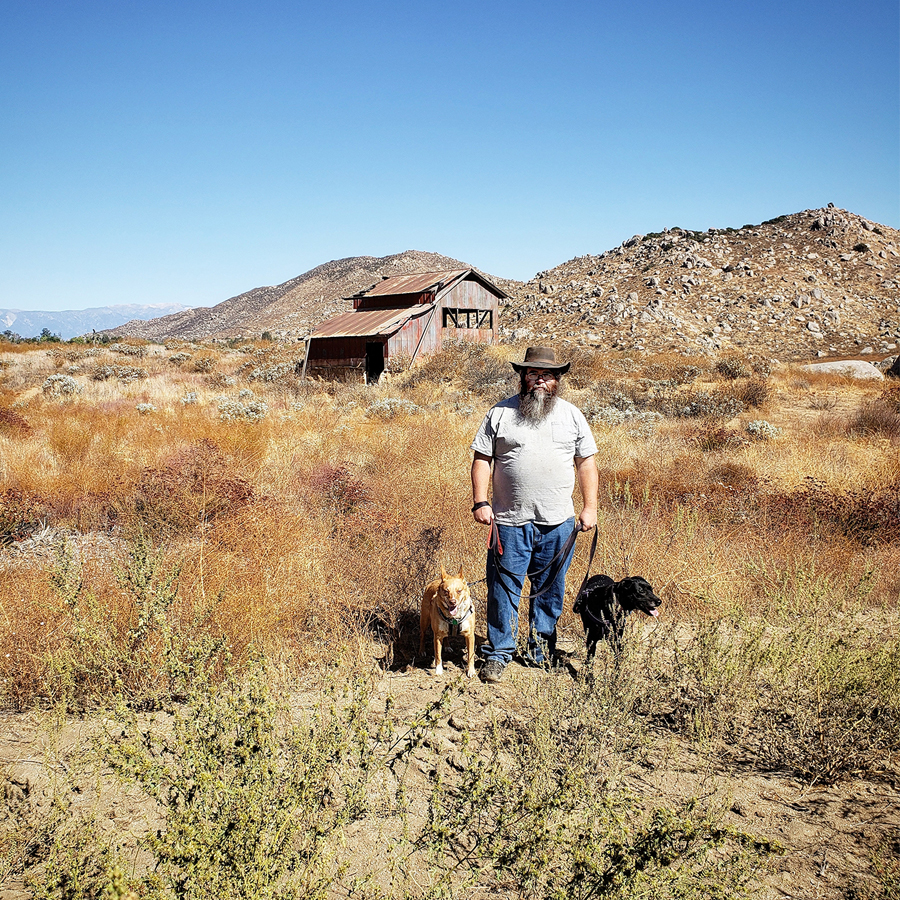 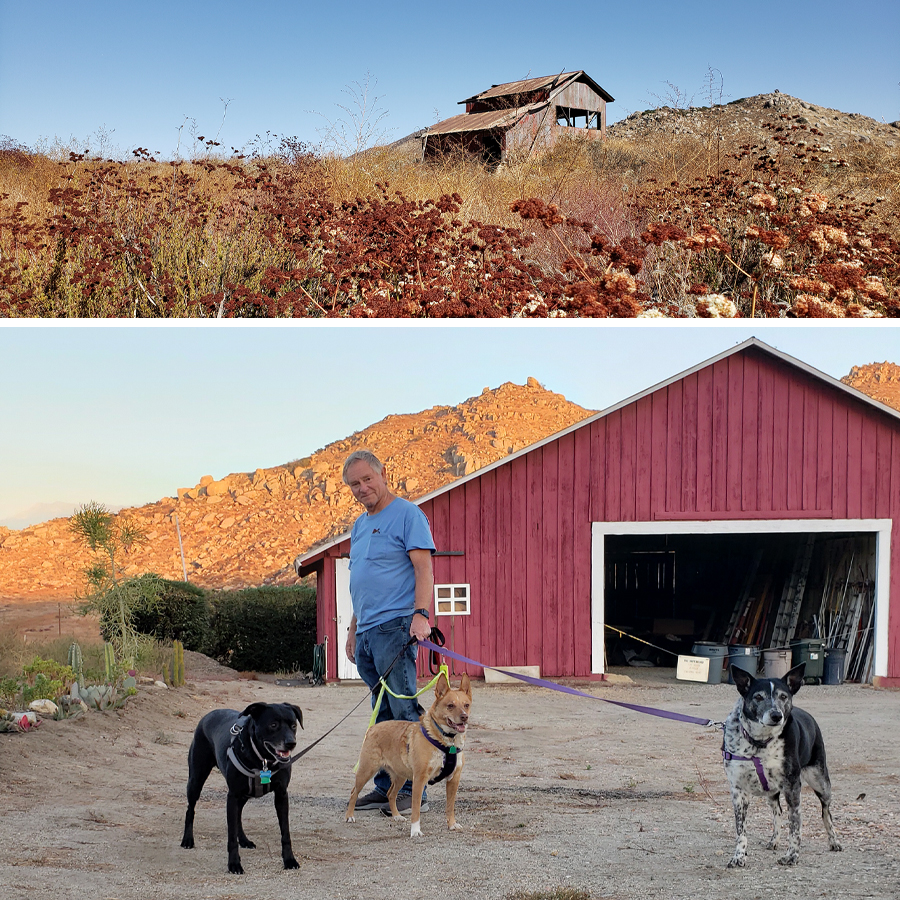 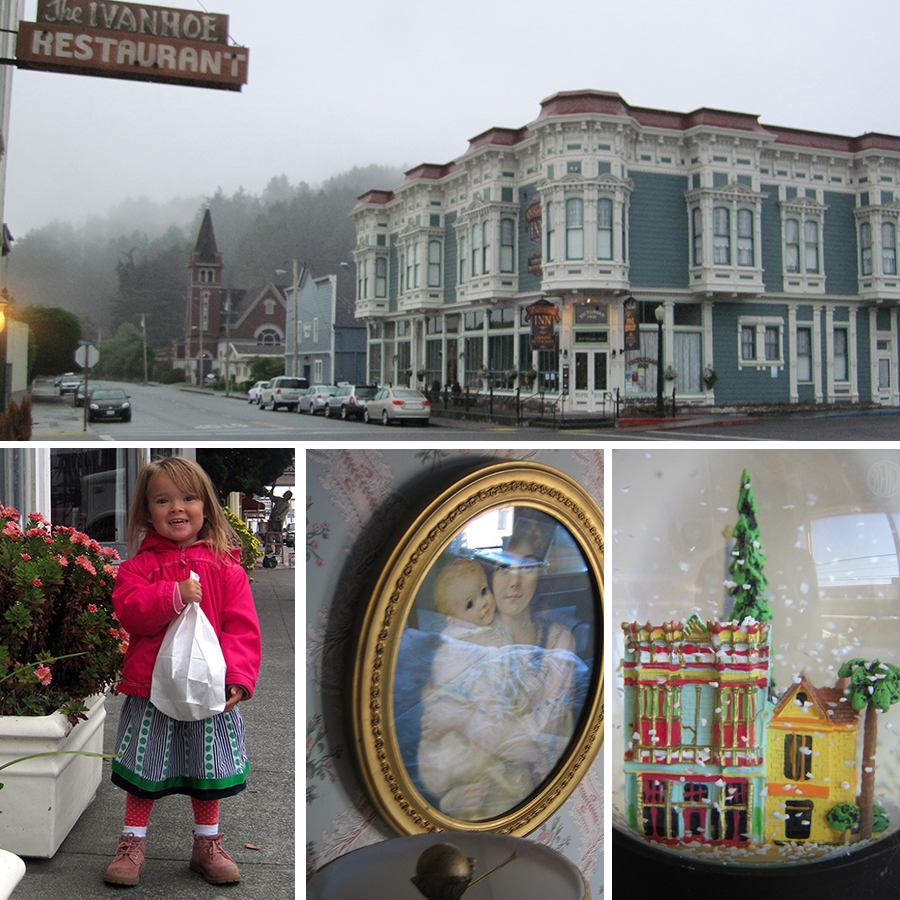