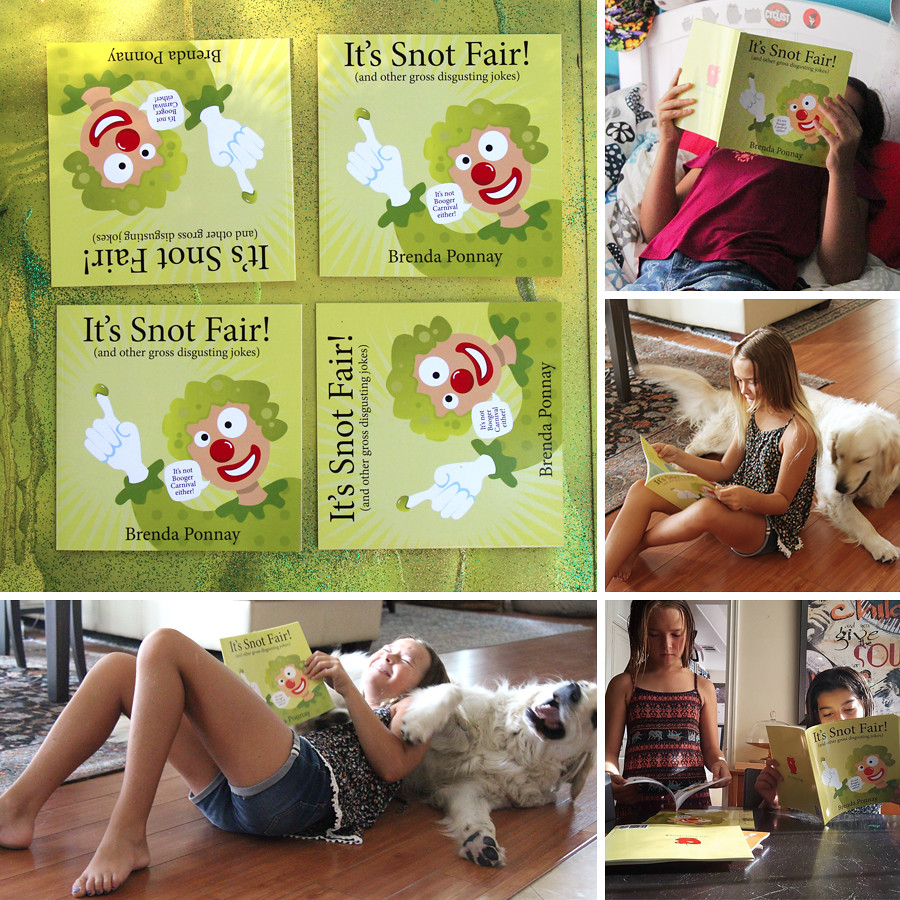 We found out that kids are checking out my books electronically at school through this really cool subscription program called Epic. I’ve been hopelessly out of touch because I’m still in the “I like paper books” camp. You know what this means? Parents don’t buy my books. Kids do. 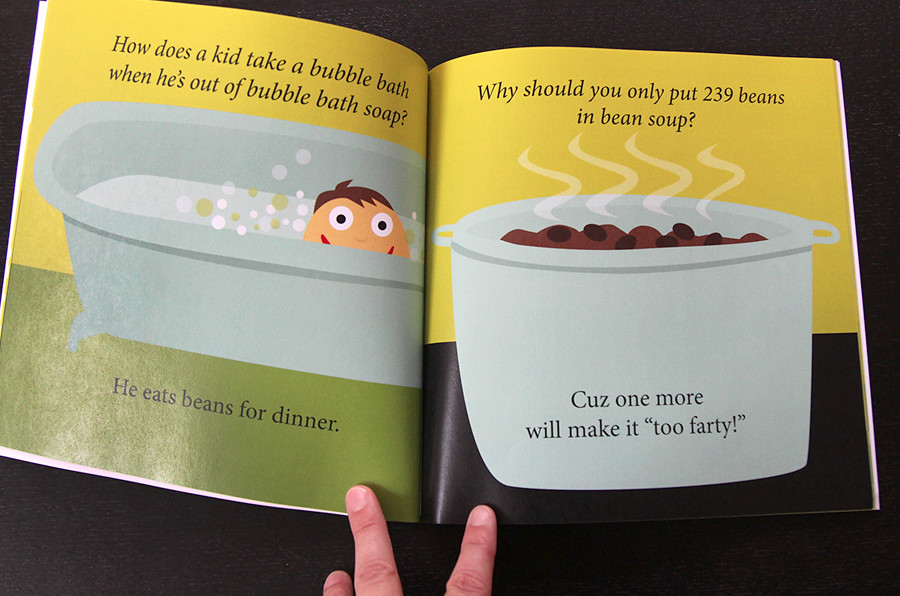 Because of this new found fact, I decided to write the most kiddish joke book I could. In fact, it’s all about farts and boogers and slime and guts. 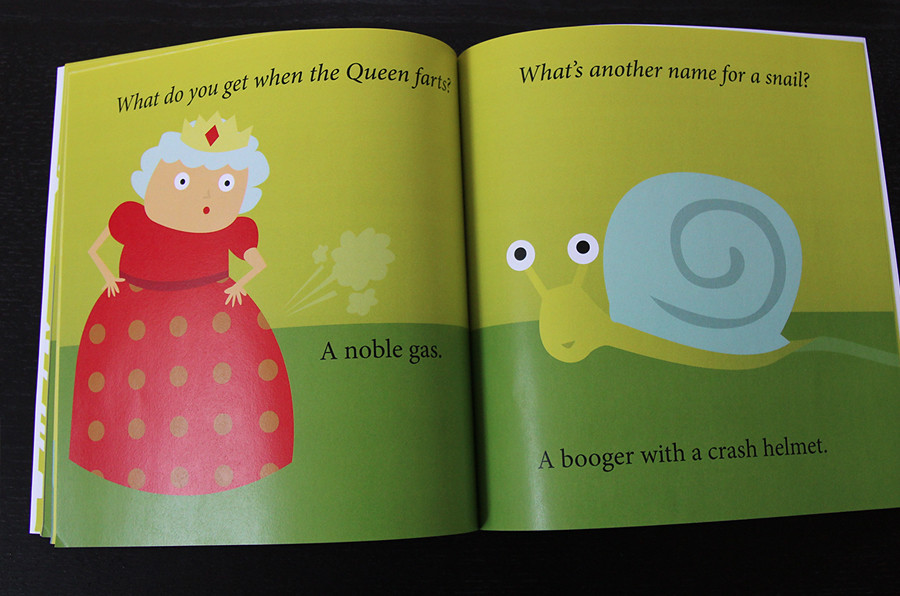 Your fifth grader will love it. And your sixth grader and your three-year-old and your husband too. 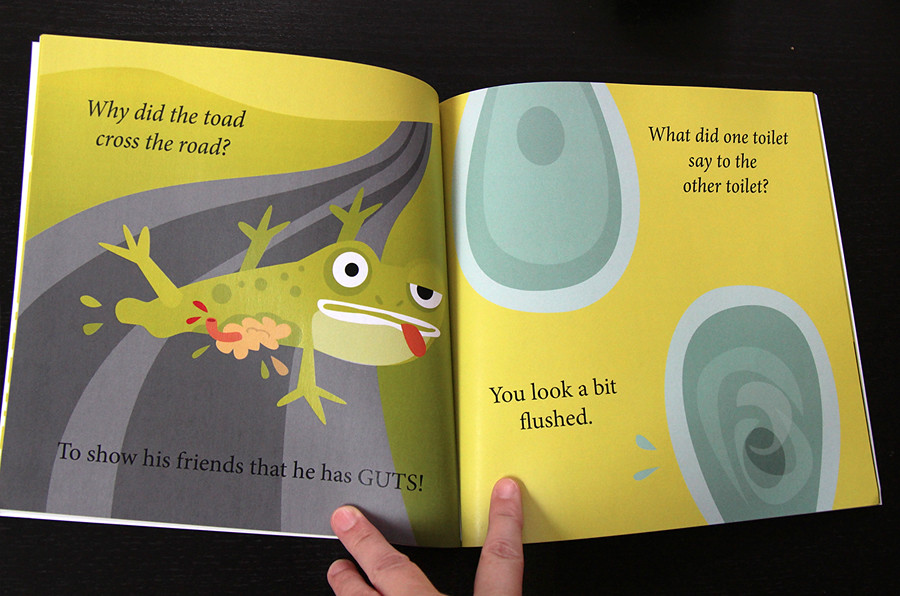 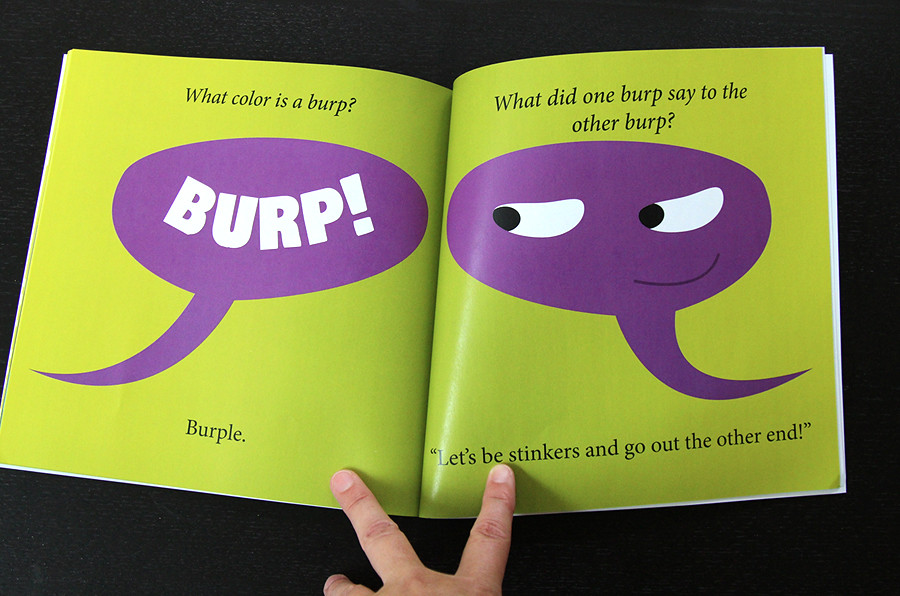 I think this is my favorite spread. I pull this one out at parties. 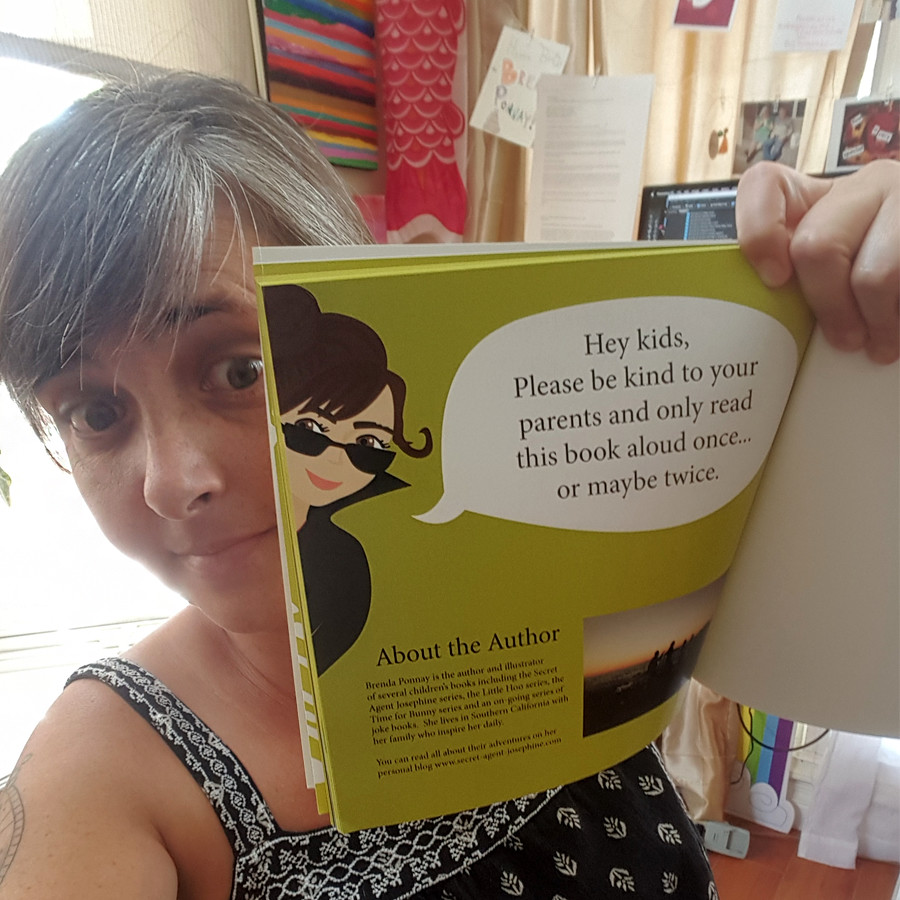 But here’s the deal. I need some reviews. If you’ve already purchased this book (Thank you! You are awesome!) please go to wherever you bought it from (amazon) or (barnes and noble) and leave a review. Preferably a good one but I like honesty too so let it rip.

If you haven’t bought one you can leave a joke in the comments and I will pick one random commenter (or maybe not so random because your joke is so funny) to mail a paper copy to! If you don’t want to take your chances on winning a free book but you really really need this book for your kids or whomever for Christmas, please rush out and buy it! It helps me pays my bills and I am eternally grateful! 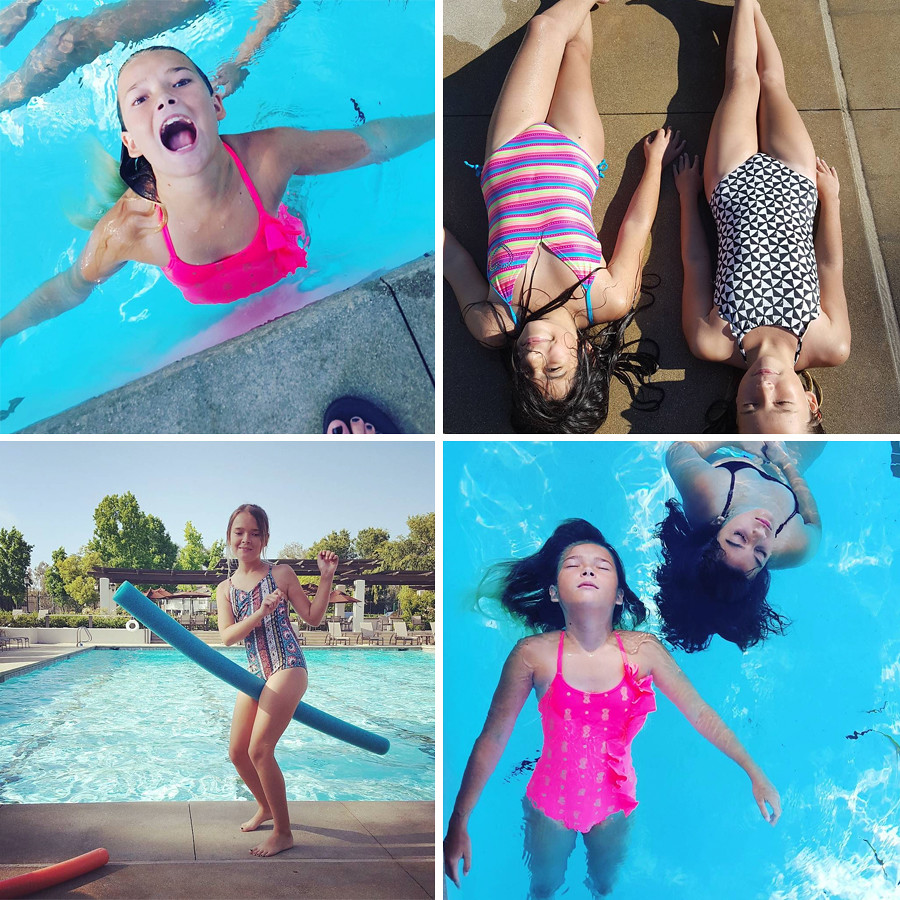 Summertime and the livin’ is easy…

You know what is NOT easy during summer? Working. Especially when you are your own boss and you make your own schedule. I am at constant odds with my boss. She says I need to work to pay the bills. I say I need to take the kids swimming because it’s hotter than dogs breath and their brains are rotting from Minecraft. We spend a lot of time at the pool but my boss keeps me up all night with fun games of anxiety. It’s two am, have you thought about your debt lately?

I swear I am getting nothing done the weeks I have kids. 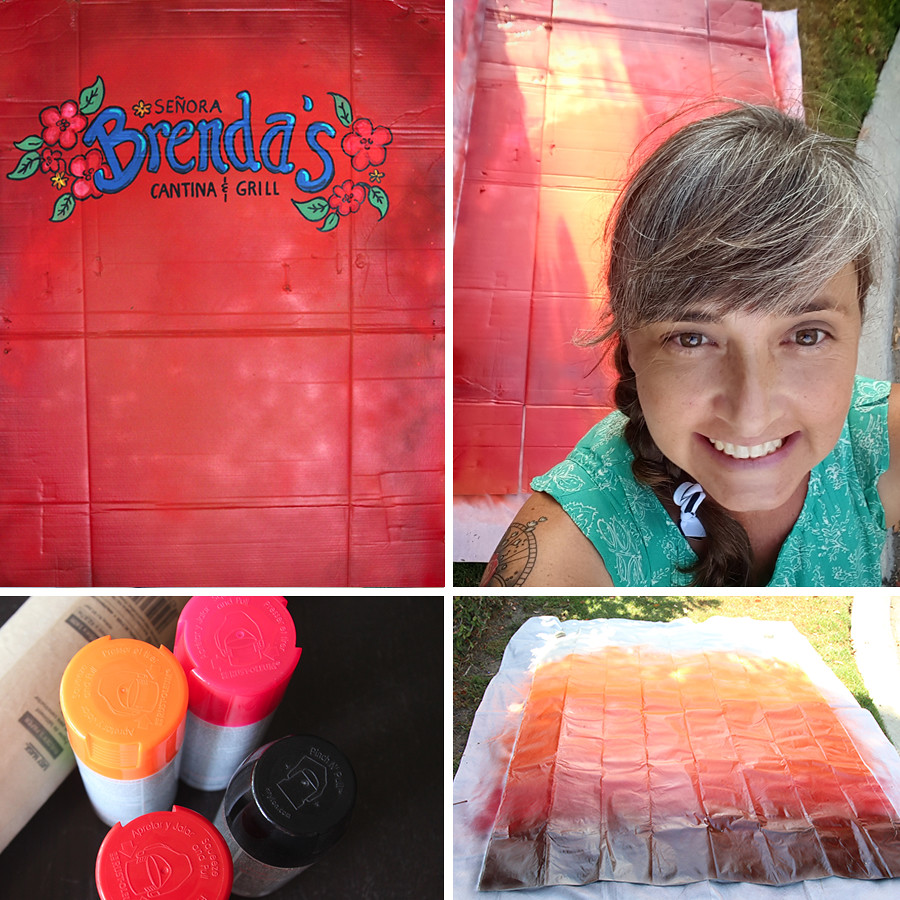 But I get tons done when they are gone! Sort of. Well, mostly.

The last two weeks I have been into spray-painting backdrops for parties. It’s my new thing. I think mostly because I am so tired of trying to find a blank wall in my house to shoot photos against. I’ve created my own walls! It’s amazing what kind of creative break throughs you can have just walking down the aisles of your local hardware store.

For example, paint drop cloths are CHEAP! Ten bucks for a huge canvas. Twenty for a cloth one. A roll of brown paper is nine. You don’t have to use them to protect your floor while you paint. You can paint on them! 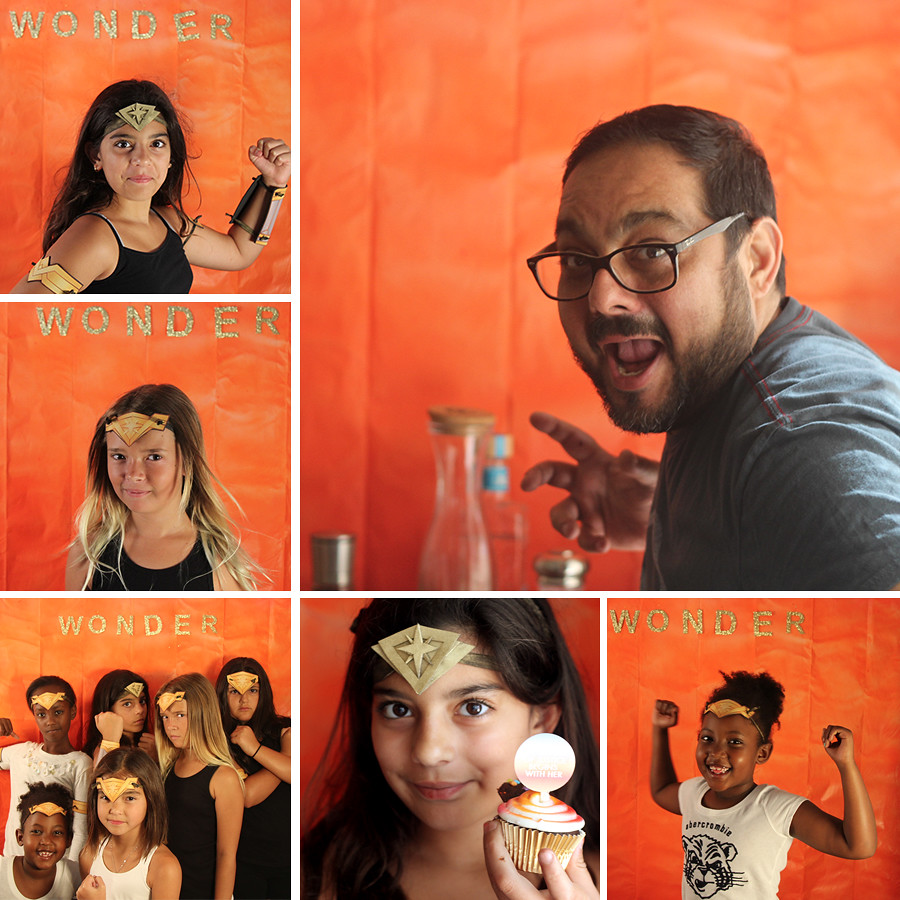 I made this orange Wonder Woman background out of a paper drop cloth. I’m not super excited about the fold lines but it covers a big space and it only cost me ten bucks. Instant wall. Just blur the background a bit and focus on your subjects. 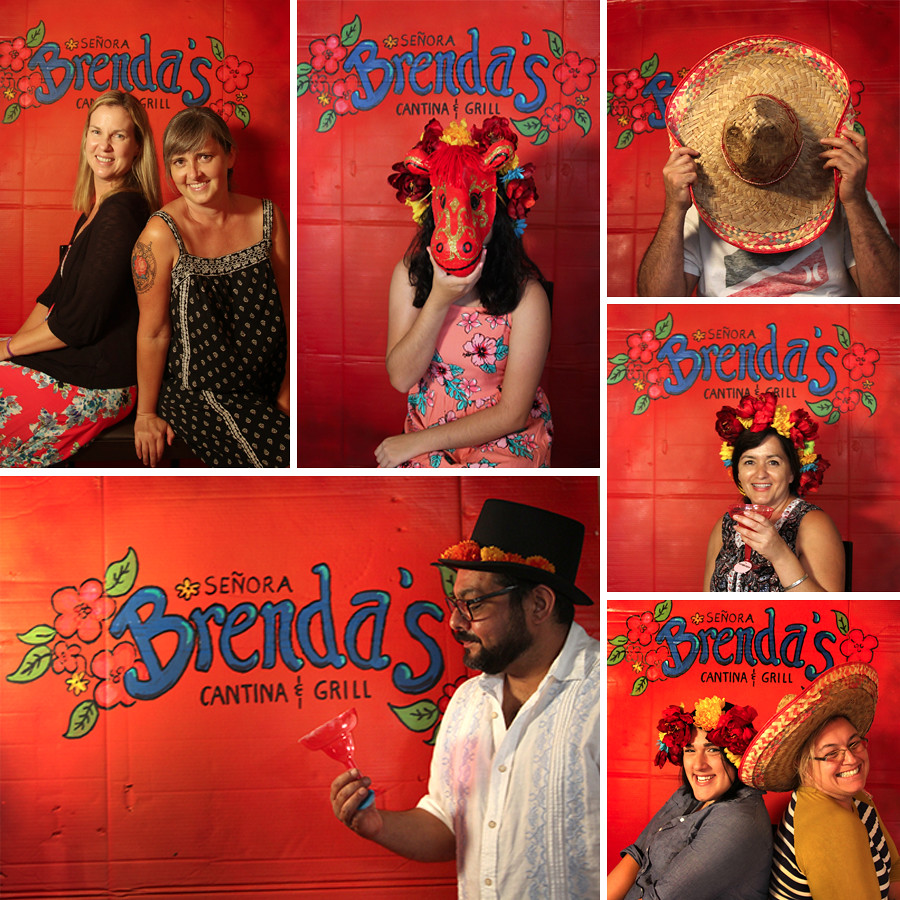 The following week we had a Pampered Chef party and I decided to make my own fake Mexican restaurant. I’ve always wanted to do that. Restaurant designer is on my list of coveted careers, right next to set designer and cake decorator. I love designing businesses. Running them not so much. 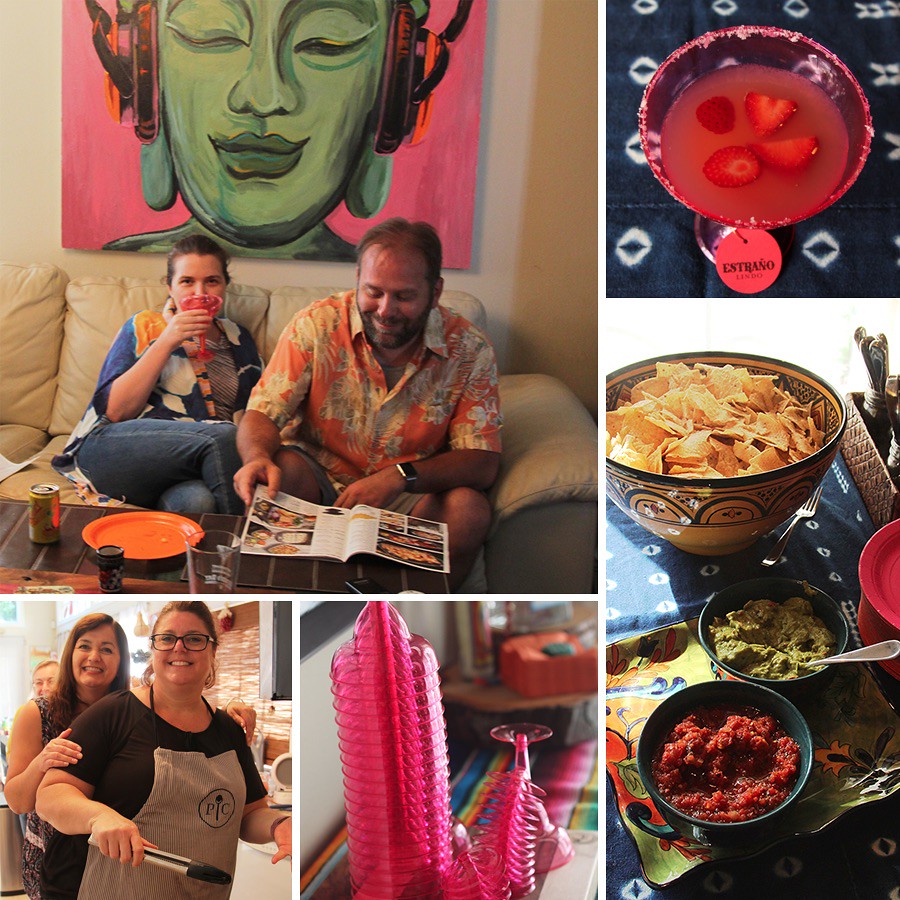 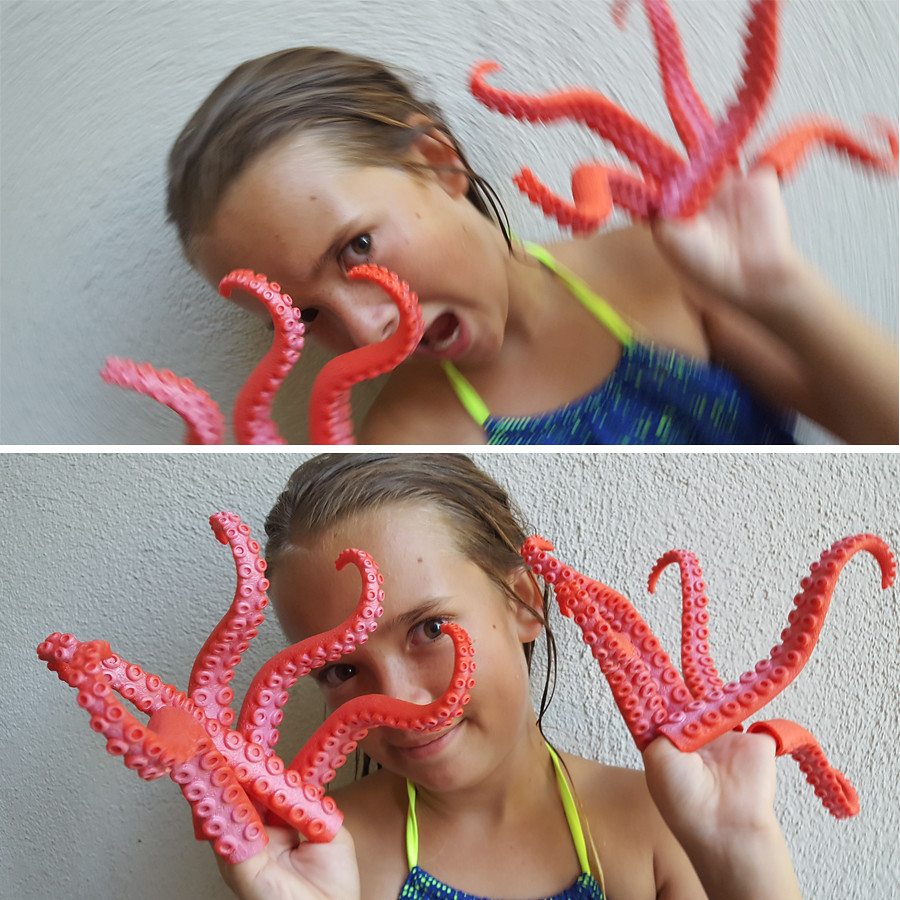 Speaking of kids, we are on a mermaid kick lately. Unicorns are so early 2017. We’ve moved onto mermaids. 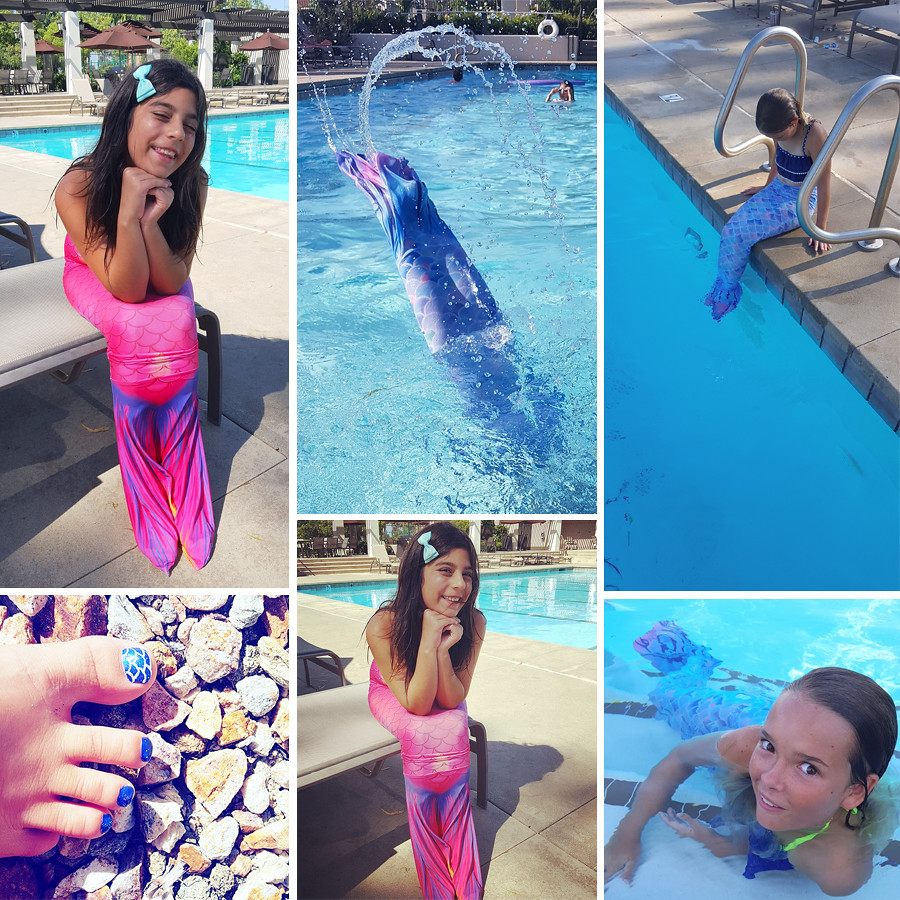 Have you guys seen these bubbles at the fair? They are so cool. 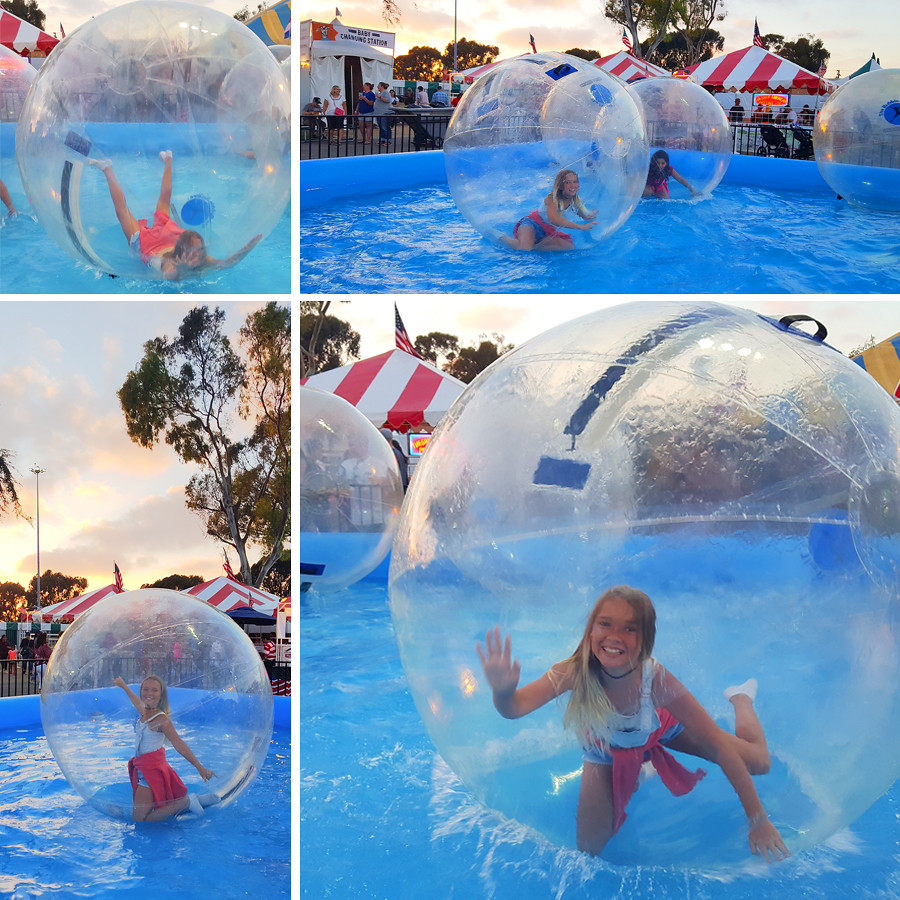 What is especially cool about these bubbles is that they saved my day. I was having such a bad day the day we went to the fair. It was the end of a bad week. I’d gotten no work done and every day it seemed like all I did was shuttle kids between camp and swimming. I was out of sorts. Payam almost turned the car around to take me home. But I rallied.

Mostly I was just sad that we were getting to the fair so late. Same song, different day. All I really care about is taking pictures. I thought it would be stupid with blaring music and blinky lights, gross fried food, kids begging for money for dumb games that you can’t win and if you do you end up winning you get a 99-cent stuffed toy that cost you twenty bucks. I sulked like a spoiled brat.

But then we got there and the sun was setting right behind these bubbles. We were the only ones there and the kids got to go free because it was kid free Thursday or something crazy. The light was golden and the kids were having so much fun splashing around pretending to be hamsters. My bad mood dissolved with every picture I took. Click, click, click. I was so happy! It’s funny the things that cheer me up. 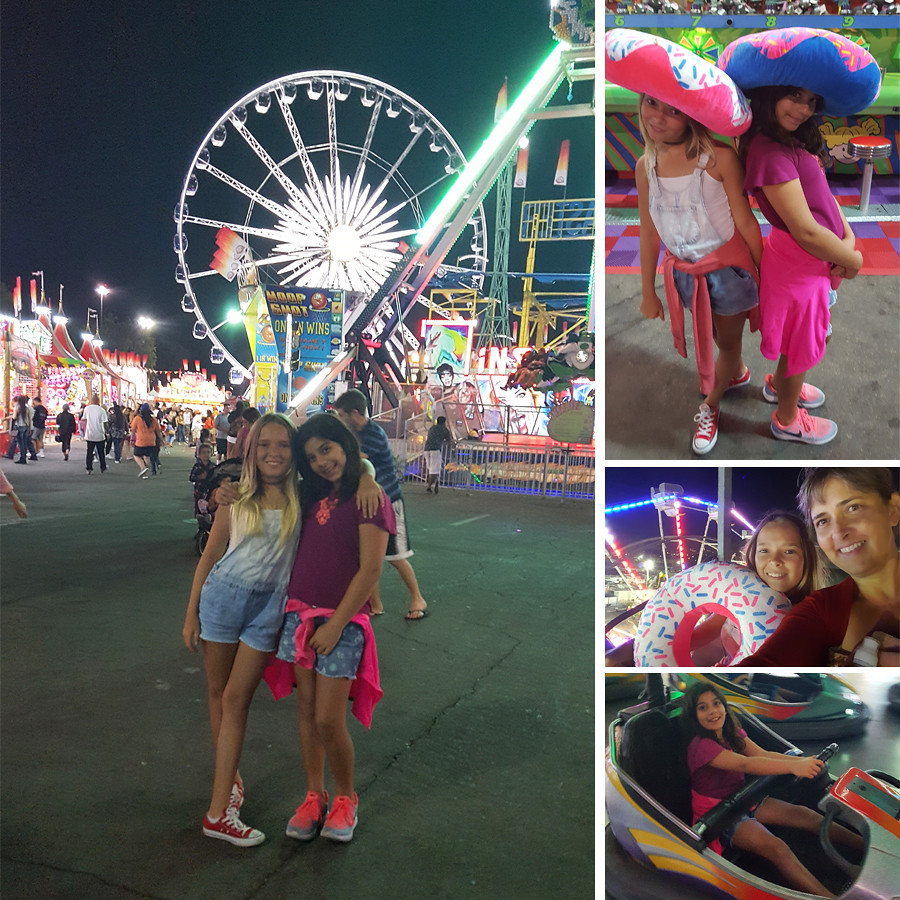 And then the rest of the “stupid blinky lights” and blaring music, smelly fried food and cheap toys seemed so much cooler. I may have even eaten a bacon wrapped hot dog and let Bug go home with a stuffed donut that ripped at it’s seam before we even left the fair.