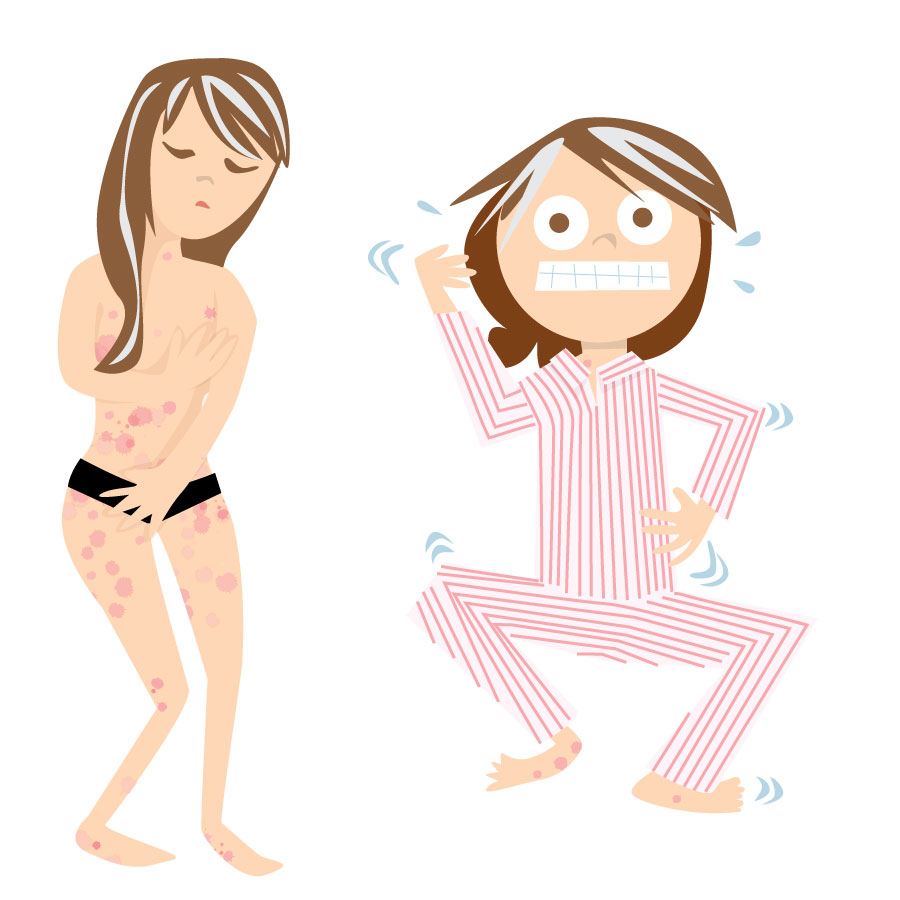 We all knew there was too much pressure on 2021.

(I’ll skip talking about politics because even though it’s a huge big deal that’s not what I do here.)

I started the new year out with SPOTS! Woo Hoo!  I had an ear infection on Christmas. Payam pulled major strings with his mad phone skills (that’s what he does all day for his job) and called my doctor for me while I pulled on my ear like a baby and tried to sleep with hot compresses. The doctor came through with a super strong prescription for antibiotics, probably from his cabin in Aspen or moonlighting at the local ER as a superhero, and I started off the new year with meds!

Nine* days into my prescription to Amoxicillin, my earache was long gone but I broke out in hives and tried to itch my skin off. I’m so glad I shared on instagram even though it was TMI because people came out of the woodwork to say that the same exact thing happened to them. What a relief to be able to narrow this allergic reaction down so quickly. I had a lot to work with: pet dander from an over-achiever golden retriever who sheds enough to knit sweaters daily, a new bra from China that I failed to wash before wearing, msg in all that take-out… There were a million things I could be allergic to, mold, plants with gnats, politics, stress, Google… All of the above?

Anyway it was craaaaaaazy! I’m already a sort of nervous person to begin with. When I have anxiety I become obsessed with my rough cuticles and any little itch or bump on my body so add in some hives and I was literally crawling out of my skin. I hate to take naps but I dosed myself with Benadryl and tried to sleep it away. I’ve been asleep for the past four days. It was the only way to cope.

Monday morning hives started forming on my lips and mouth so I freaked out and went to the ER even though it’s the last place on earth I want to be right now. Thankfully at six in the morning our local ER was not over-flowing with COVID patients. I got in quickly. They gave me a shot of Benadryl in my tattooed arm and I slept. Then the ER did get busy (It’s heart breaking. The doctor checking on me was so stressed out.) and since I was not going into anaphylactic shock they discharged me with some steroids and I went home. I’m really thankful. That could have been a lot worse.

I stood behind an old women in line when I checked in who was obviously suffering from breathing problems. The halls were filled with nurses wearing full head gear and dividers were set up keeping rooms separate…even though our little ER is really nice and new, I could tell they had been in the trenches and were effectively bracing for more.

Now I’m all pumped up on steroids and feeling like Trump (gross, I know). My spots have faded into softer versions of themselves. I probably look like I’m covered in bruises but they don’t hurt and they are only on parts of my body that don’t show so I don’t care. No itching is heavenly! 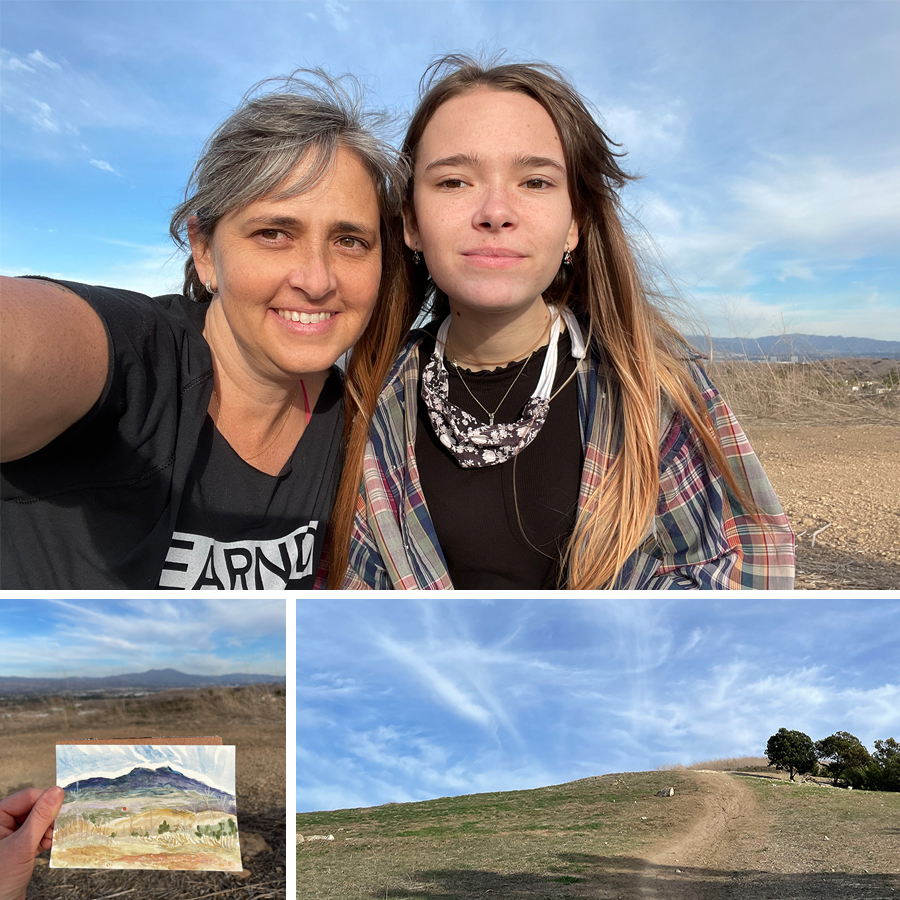 So just a quick new year check in from me! Sorry it’s so personal when so many other more important things are happening in the world.

Happy 2021! I don’t think I’m going to do a calendar this year. I’ve started several. But I really want to do a different format. I hardly use the full page full of boxes layout anymore. Do you? I want to make a day planner but I have not found a template that lets me customize the art on every page and I really don’t feel like formatting 356 pages. There’s got to be something out there. I know I’m a million months too late but who knows, work might get slow again.

How are you doing my faithful loyal internet friends? Cathy, Gingermog and Susan and a few other lurkers who comment now and then? How do you even find me anymore? I don’t deserve you.

I’ve been writing snail mail letters to friends lately and it’s really been helpful. It’s funny how a phone call or a text just doesn’t do it for me but pounding out a two-page letter is incredibly therapeutic. Blogging after all these years is still my therapy. Thank you.

*I missed a few days and I’m terrible at math. 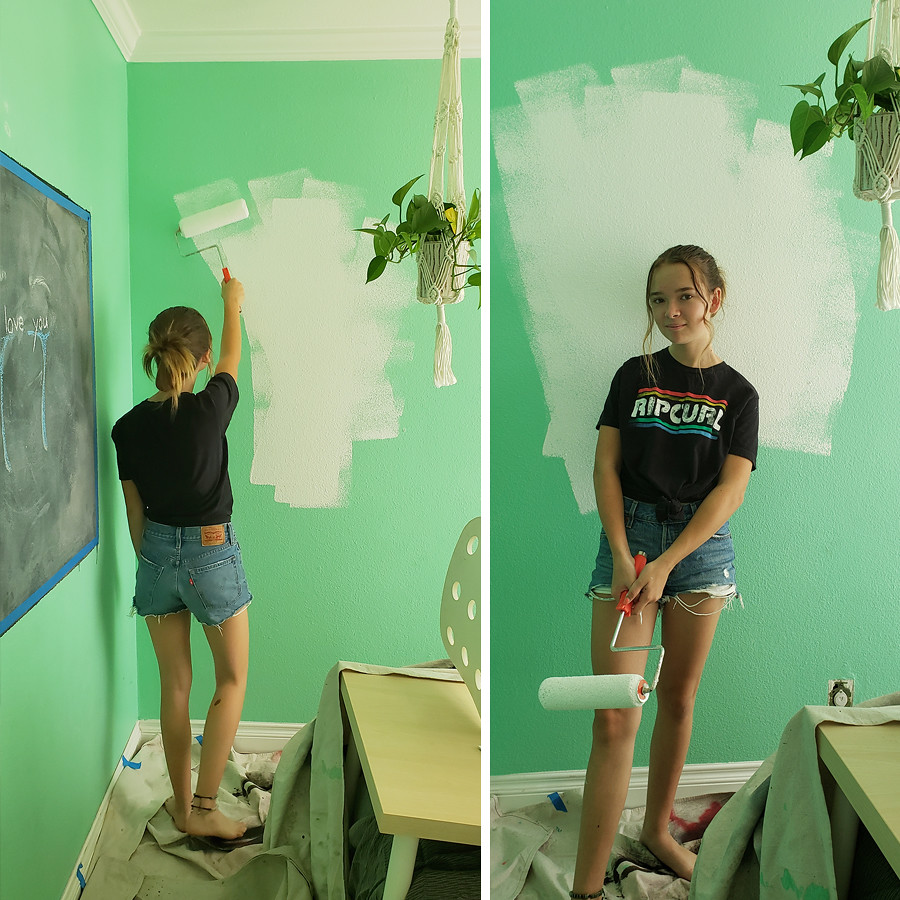 When I was a kid I was lucky if I got to paint my room a shade of white with a tinge of color. Sigh… Remember those days?

Actually, I was pretty spoiled because when I was twelve or so my Grandma completely redid my room in gray and pink AND she put up starched fabric on the wall as wallpaper three sides around my built-in bed with curtains so that my bed felt like a ship’s cabin. It was so cool. But I digress.

What I was trying to say is my kids are so spoiled they paint their rooms crazy colors and AND THEN two years later I let them paint it all over again: WHITE! Pffff….. kids these days, they don’t know a good thing if it looked them in the face. Just kidding. I know I spoil them but it’s really fun and you know how much I love a good re-do. I’m just kinda surprised Bug picked white of all colors. I mean if I had my way, I’d let her paint her walls dark ombre indigo…

So white it is. 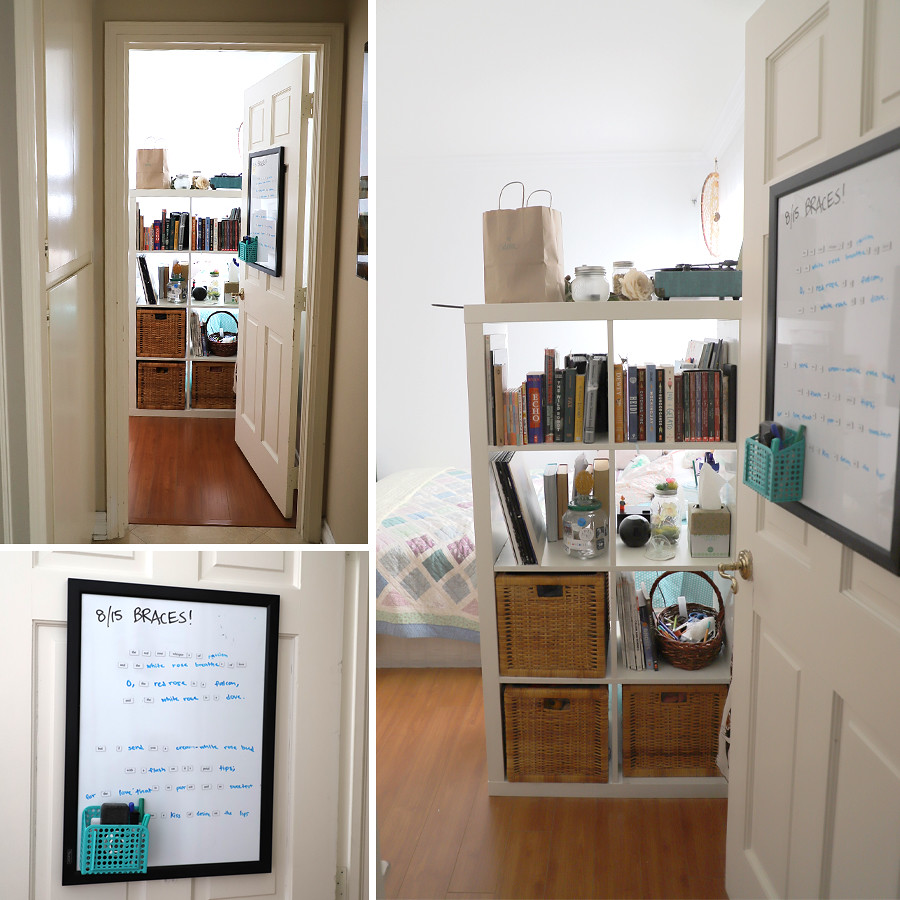 I guess white is a trending color now.  She worked so hard on this room and I kept scratching my head thinking it looks pretty plain, like an apartment that was just moved into. But I’m not going to complain because I do like it too. It’s very bright and happy. 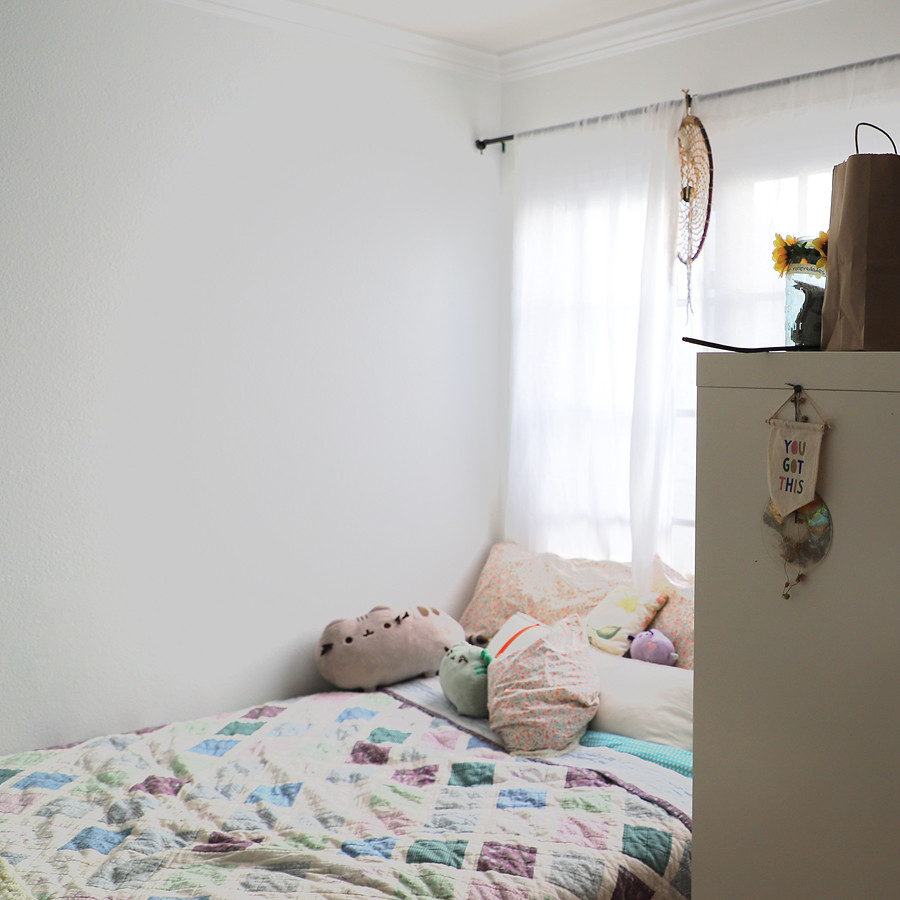 I especially loved that it cost us next to nothing. I scrounged up the old sheer white curtains from my mobile home days, we hung some battery operated lights across the ceiling and it’s pretty much done! We did also order a pretty soft peach tapestry for the wall but it’s backordered until October. 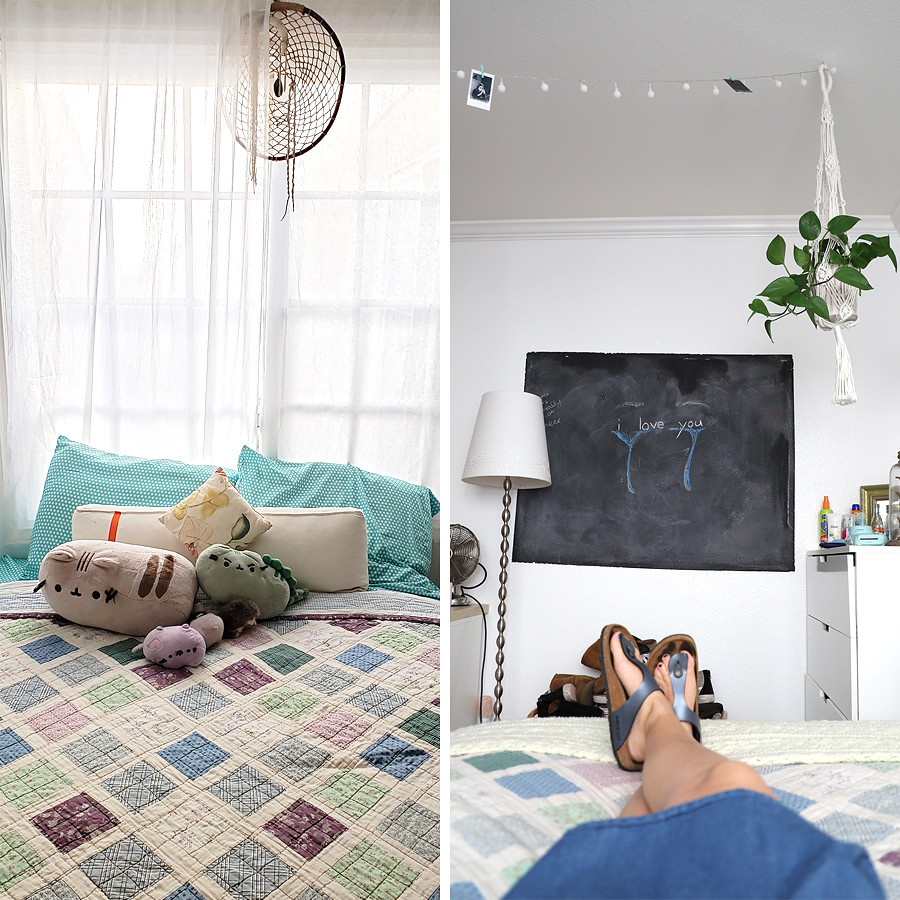 The quilt was my grandma’s. I’m glad she loves it. That’s me lounging on her bed. 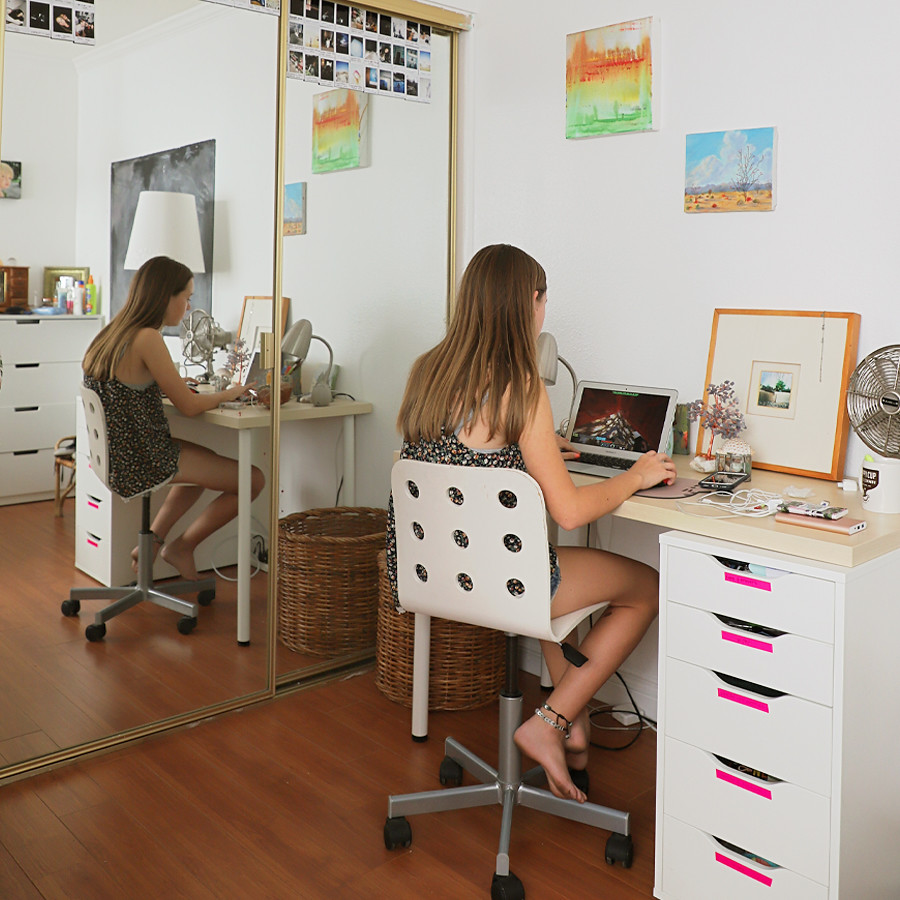 And that’s her gaming. Summer is almost over so they are getting in every minute they can before we enforce no-electronic rules again. 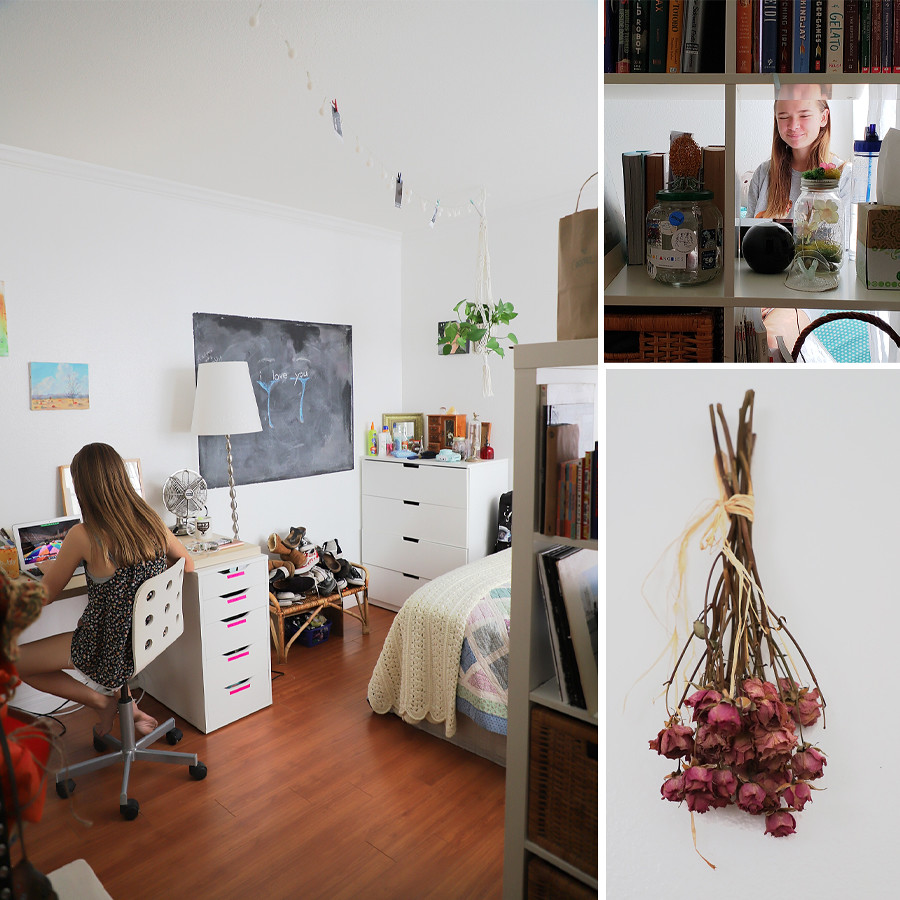 It’s cute right?  I mean, it’s nothing crazy but I love that it’s all her. She took her time and cleaned out every item in her room that she didn’t think fit with her “theme”. I’m proud of her curating skills. I remember it wasn’t so long ago that she cried if I threw anything away. Not anymore. She is my purging queen. 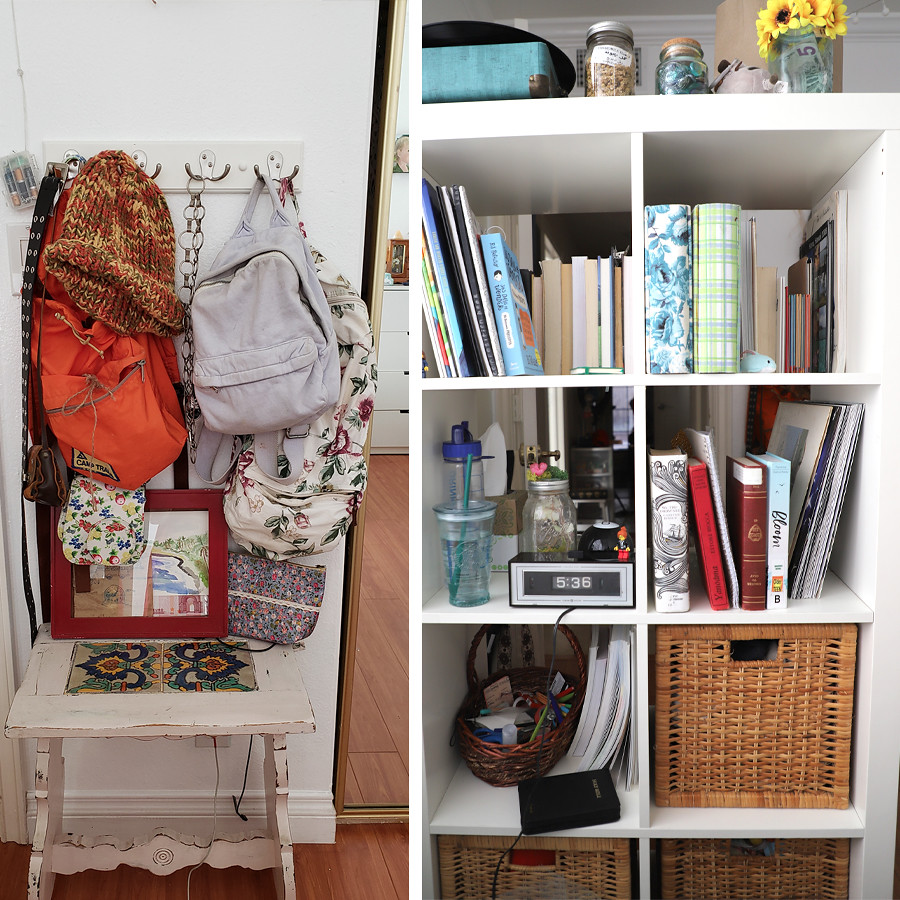 Each item that she chose to keep is extra special. And now Joon is going through the same thing! Room re-do’s are contagious it seems. I will post her’s soon too. But in the meantime, look at this face: 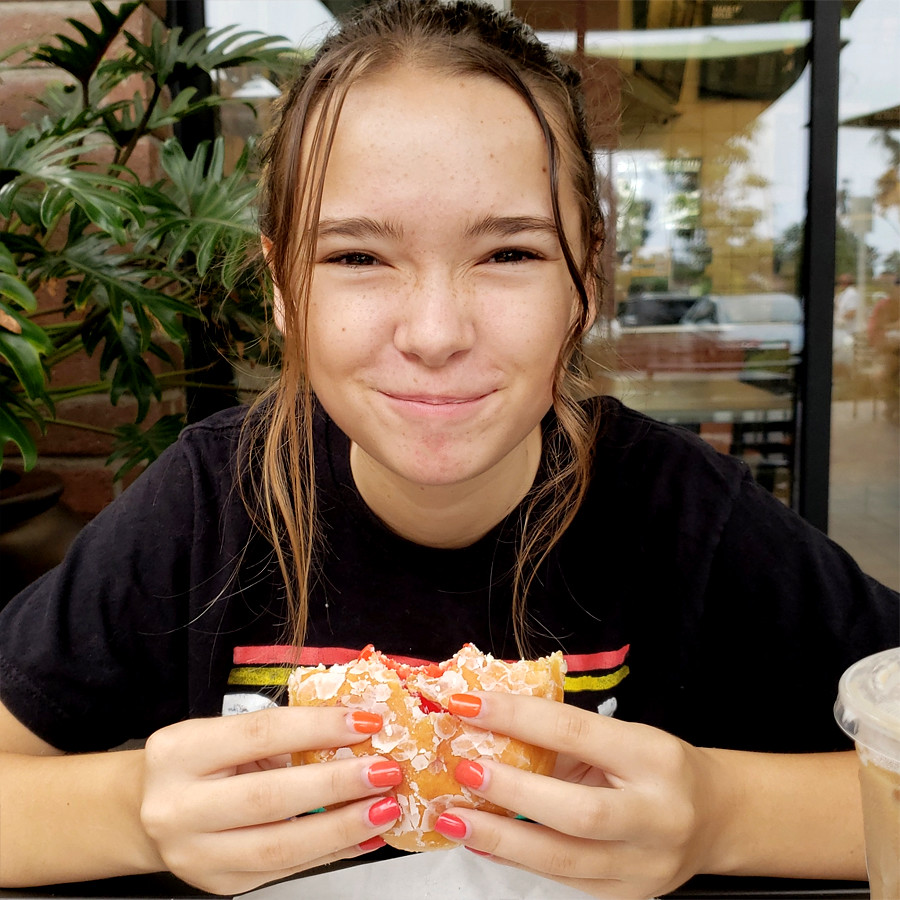