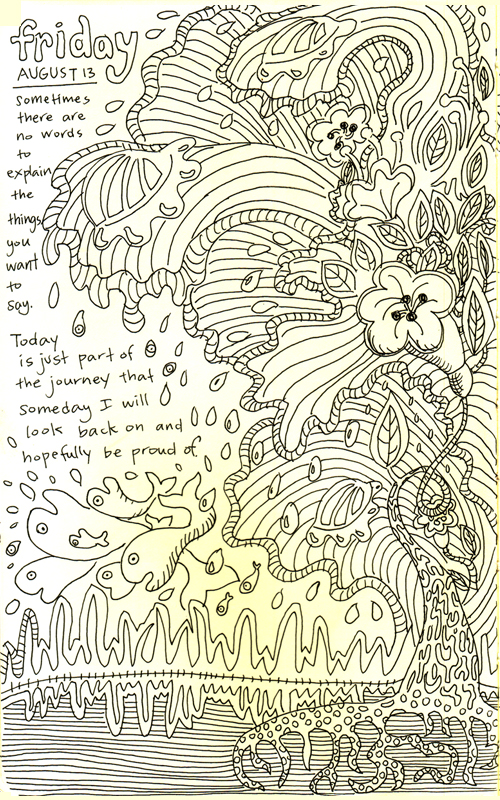 Inspired by Ponyo and the fact that I can’t really draw or blog about what is bothering me. Maybe I should channel my feelings this way more often. 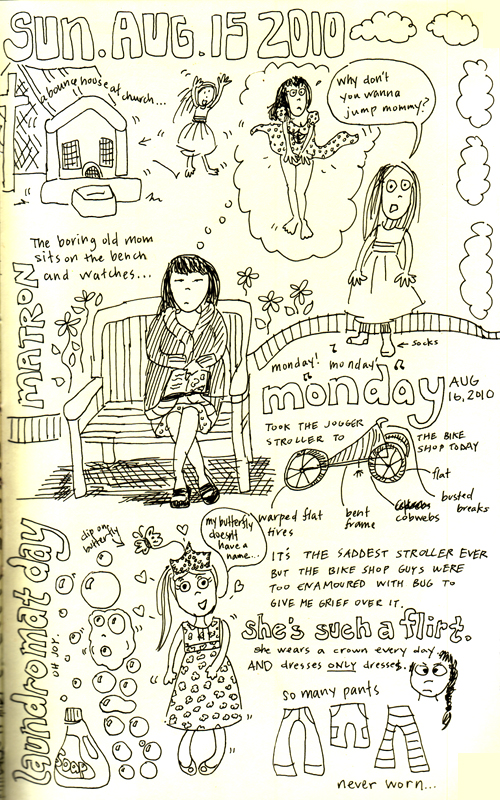 The church I sometimes go to has a bounce house sometimes, maybe once a month or so. I’m not sure since I don’t go often enough to know their schedule. I think it’s part of their attempt to attract more children. It’s a great idea. It seemed terribly irreverent to me at first when I was sitting in the service and I heard this horrible loud air-blowing sound but then when Bug begged to go back the next Sunday, I had to agree it was a pretty good idea. Her Sunday school class also put on a little play about creation for the whole congregation and Bug got to stick little felt animals onto a felt board on stage. I thought that was pretty cool.

And more on the pinkness. I think I’ve written enough about that. 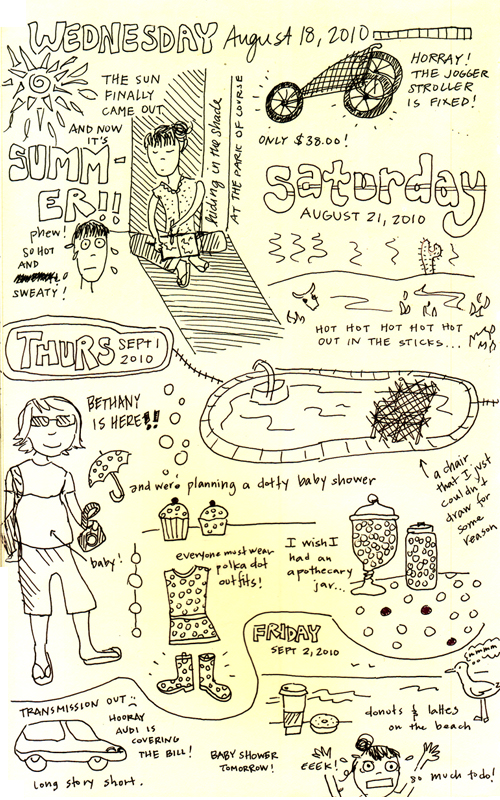 Old news! Boo hiss! Bethany has already come and gone. Sob… Oh! Did I tell you about my car transmission going out? I can’t believe I never blogged that story. It was terrible! My car is only four years old and it only has 42,000 miles on it. WAY too young to be having transmission problems already. We knew when we bought a high performance German car we’d be in for trouble in the long run but this is the short run!

I was at a gas station. I had just filled up and was about to put the car in drive and leave the station. When I put the car in gear it went in REVERSE instead of Drive! The gear shift was in drive but the car went into reverse and scared the crap out of me. I looked down at the gear selector and sure enough the lever was on D not R. So I slammed on the brakes (of course), turned the car off and started it again. This time it drove fine but then the gear selector indicator in my dash started blinking. Then my engine warning light went on too.

If I’ve learned anything over the years of being a big sister to an auto mechanic and being married to a car snob, I’ve learned to NEVER ever drive with warning lights on. So I found a parking spot in the shade in a nearby parking lot and parked. Then I called my brother and Toby and a car dealership nearby. (I’m skipping over the part where I freaked out and started crying and couldn’t carry on a conversation with Toby without yelling so I handed the phone to my sister-in-law, CC, and let her handle everything. I love her.)

Toby did some googling and found out that this wrong-gear problem has been happening to a lot of Audi A3 drivers and figured I was probably okay to limp home to my mom’s house (that was my destination) as long as I stayed in the slow lane and was ready to pull off the road if anything funny happened again. Well, I tried that and my car wouldn’t even go into second gear! It was stuck in first and revving like crazy. Of course this happened on the on-ramp of a freeway with several impatient cars and a semi honking behind me.

I pulled off at the next exit and called a tow truck thanks to my brother’s triple-A plan. I’m so thankful to my brother and his family right now. They saved me about a trillion dollars in towing. A tow truck came and drove us all the way back to my home dealership where I left my car for a week and a half. The dealership set me up with a rental car and I was as good as new.

Two weeks later the dealership contacted me and let me know that Audi was paying for the repair (a simple computer program problem) even though my warranty was up in June of this year. Phew!!! That was such a huge relief. We couldn’t even begin to afford to pay for transmission work right now. Toby’s half-tempted to sell this car even though we love it so much and it’s already paid off just because we really can’t afford to be fixing it all the time. But we’ll see. Now that it’s back from the dealership and running great it’s hard to think about offloading it.

I almost forgot the best part of this horrible day! After I got the rental car and was home for dinner etc, I locked the keys in the rental car trunk! Good times!! It took not one tow truck but two to come and unlock it with a funky slim-jim thingy. And because I didn’t want to admit to Toby that I had done such a stupid thing (I have a history) I forced CC and Bug to sit outside in the cold with me while we waited to be rescued by the tow truck. I should have made this its own blog post. I even have photos of our incredibly long horrible day.

But at the end of it all you know what I remember the most? How great Bug behaved and how wonderful my sister-in-law is when you are in the thick of it. You know what they say about people’s true character showing up in times of stress? Her character is golden and mine is a black hole of failure. 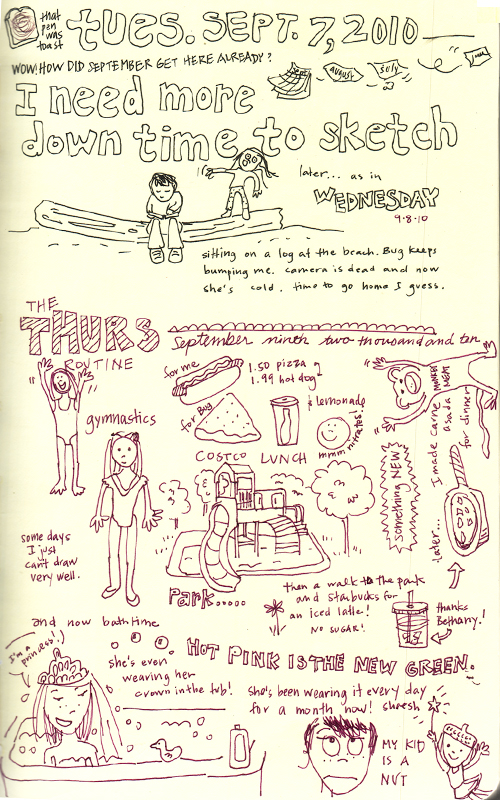 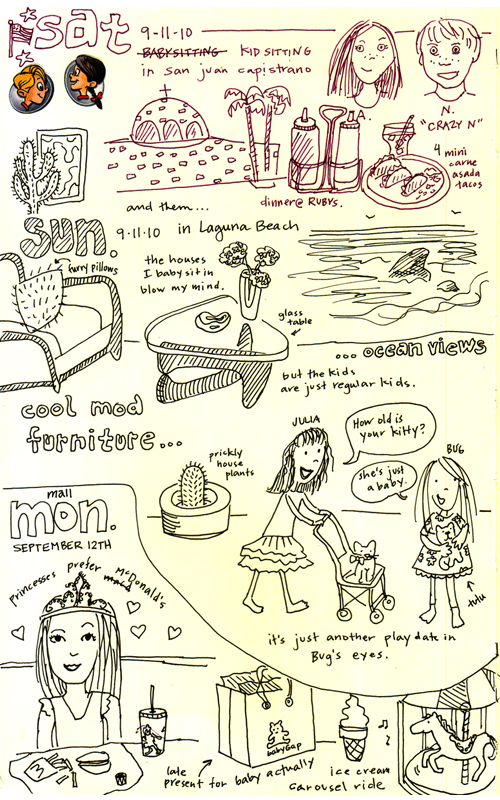 I’ve been babysitting a lot which is great for the budget. And it’s great for Bug who desperately wants someone to play with all the time. I love it that people will hire me to watch their kids and I can bring my kid along too. It’s a great job for both of us. 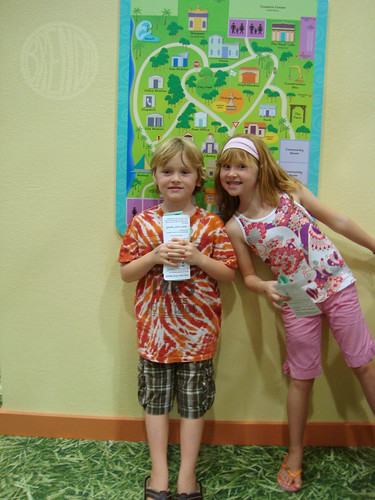 We (meaning the kids I babysit and Bug and I) went to this really cool place called Pretend City yesterday. It’s in Irvine and relatively new. I think they even opened this month. It’s super popular, loud and crowded but I think that might be only because they’ve been written about a lot in the local media lately. It’s geared toward ages 2-5 so if you have a kid that age who is a non-napper, I’d recommend going in the afternoon and avoid the morning rush. It was crazytown in the morning. Crazy but fun though. We loved it. 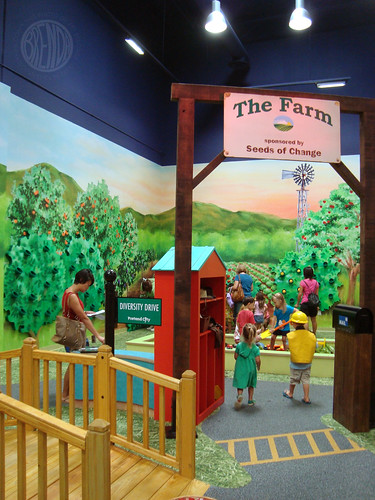 Basically it’s a pretend city (hence the name) in big office warehouse type building. They’ve got a bank and a grocery store, a farm and a police station… library, etc etc etc. Everything is kid-sized of course and you can play. Pretty much it’s your pretend world with real props. Well, plastic ones of course. You can work on the farm and dig up plastic vegetables, pick plastic apples off the wall and then take them to the market. 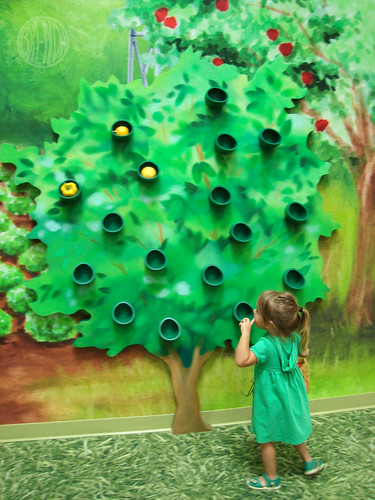 I might have to use this idea in a mural someday. 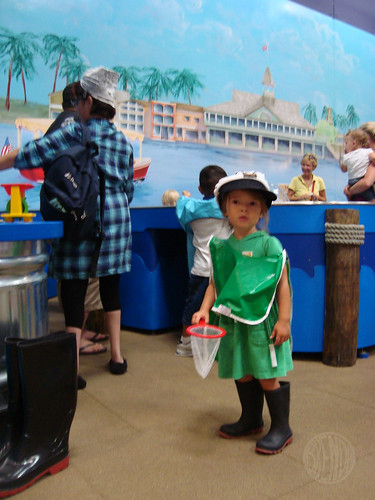 You can put on real rubber boots, a rain coat of sorts and a real fisherman’s hat and go fish in the marina. Bug loved the water works. Once you catch a fish with your net you can even wrap it up in brown paper. I loved that detail. 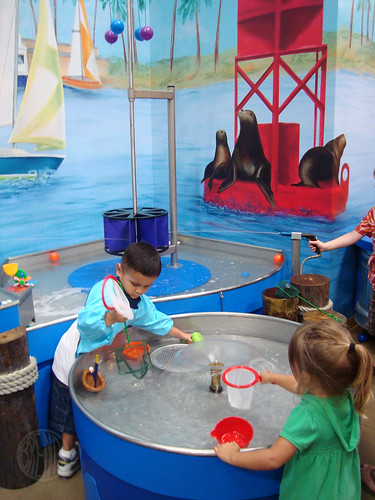 It’s all handled really well with minimal mess and fuss. I’m surprised that they can allow kids to get so hands on with so many props without chaos breaking out. I really hope this concept sticks. 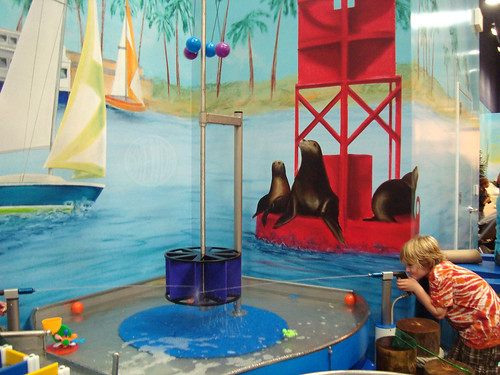 Of course the water area was very popular. 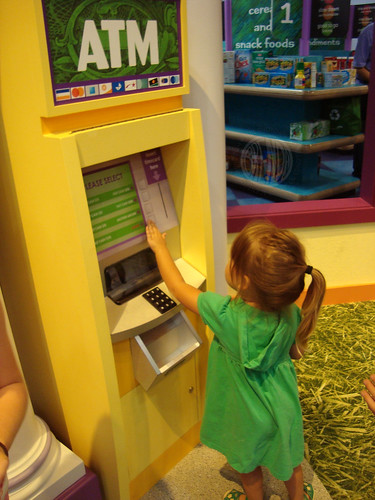 What is cool about this little town is that kids can get a job so to speak or at least understand how jobs work. You can try on costumes, pretend to work and then punch your time card. They have little paper punch cards that they can stamp at various locations and then take to an ATM that dispenses real paper cash. That was a huge hit. 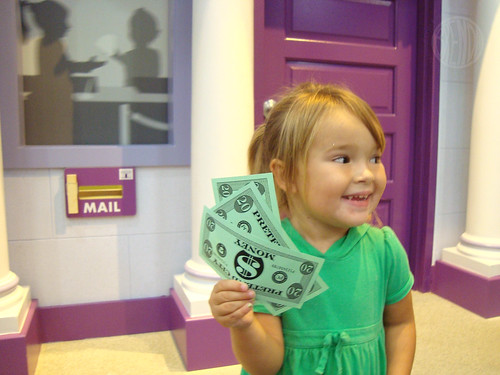 Of course nothing is super computerized or anything and you can rob the bank quite easily by sticking your punch card into the ATM over and over but that’s besides the point. Though I found it humorous that the seven-year-old boy I’m babysitting spent most of his time in the city swindling other little kids. Not that I think he’s going to grow up to be a con man or anything but I thought it was a bit funny that corruption breaks out no matter what the size of your population. And by size I mean, little kids. 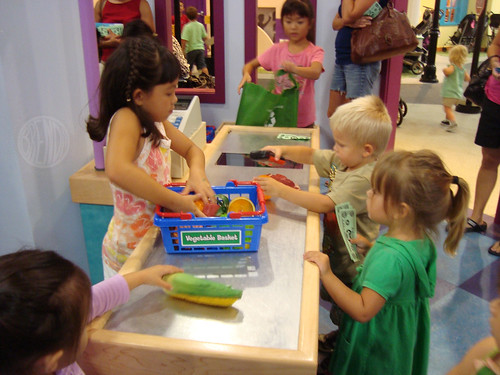 After you get your hard-earned paper money you can go to the grocery store (sponsored by Ralphs, which I thought was cool. Go Ralphs!) and buy stuff! Bug LOVED this part. I think I have a little shopper on my hands. What I really liked about the grocery store area though was how the checkers (little girls in our case) took their job so seriously. There was no adult telling them what to do but they took each item and carefully scanned it. Then they hit a few keys and asked their little customer for whatever dollar amount they made up in their head. It was so real it was creepy. It really makes you realize how play is just preparation for the real world. 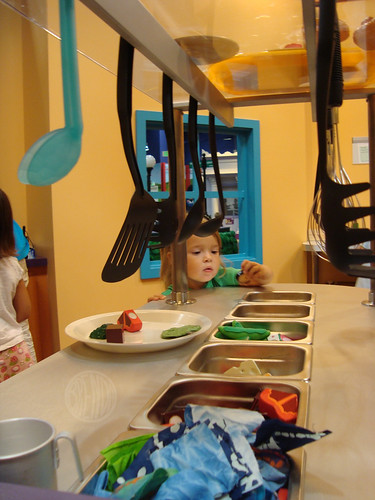 There was also a restaurant to work in. 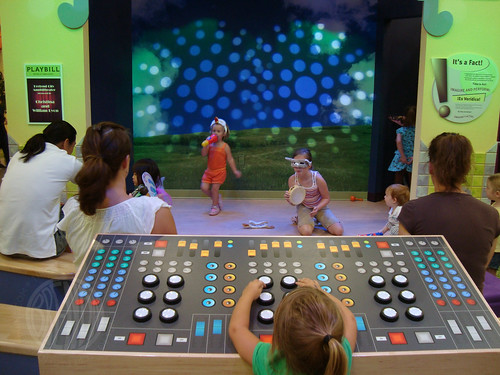 And a theatre. Bug took a liking to the sound controls. The music was preset in one minute tracks but you could push buttons and make funny sounds. That was cool. 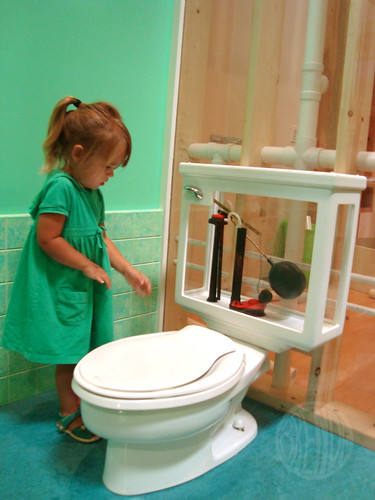 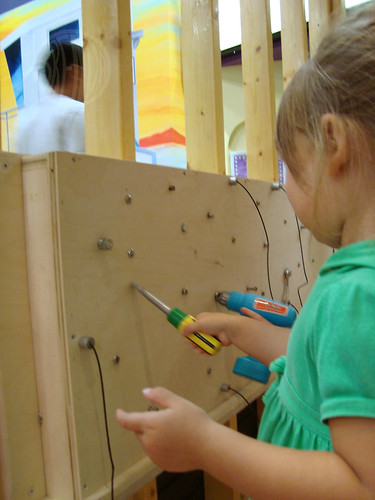 The building and construction areas were great. I would have liked to explore them more and take more pictures but they were very very busy with boys, naturally. Let me tell you, it was challenging to take photos in this place without getting everyone and their cousin in the shot too. Not to mention the lighting was unnatural (fluorescent? sodium? both?) and I HATE to use my flash so most of my photos are blurry but I figured you’d forgive me. It’s a place that you really have to see to understand, so blogging with photos seemed important. 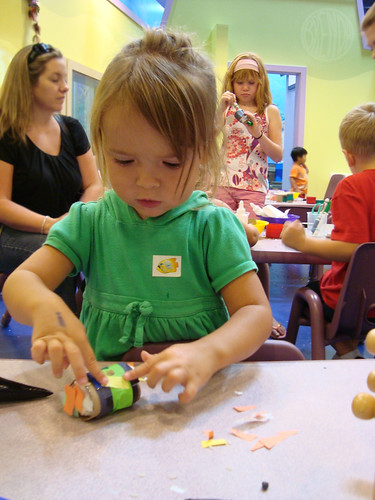 We ended our visit in the art studio which made me happy of course. The kids made paper sushi. I thought that was ingenious. It’s basically a section of toilet paper roll wrapped in black construction paper, stuffed with tissue and then decorated with real rice and bits of colored paper. They looked remarkably real for paper and tissue. 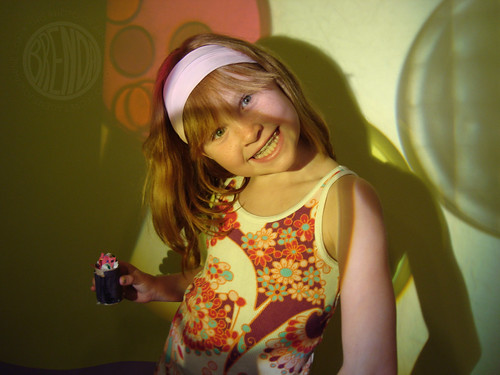 Then we posed in the funny shadow area. There were so many things to do. We missed a lot of them because we were hungry for lunch. I could seriously see burning several hours here–which is nice for us because we are in the middle of a heat wave and it is HOT HOT HOT at home when you don’t have air conditioning. Spending some time in this indoor city was a blissful relief for me. I don’t care how many kids I have to wade through.

So that’s that! I’d give this place a thumbs up. And this is NOT a paid review. My trip was sponsored by the mom of the kids I babysit but admission is $10 for anyone older than 12 months and military and seniors get discounts. We say, “Check check check it out!”