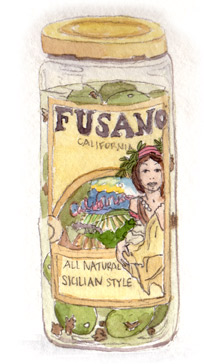 I love illustration Friday. It pushes me in ways I never would have gone. Especially on days like today when I want to write about something completely unrelated to the chosen word of the week. So how am I going to tie the word “ancient” into what I really want to talk about? I’m going to push the outer limits of creative writing, that’s how.

I was collecting beach bits for Amanda and I was looking all over my house for something to put them in. Something sweet but durable and definitely mailable. I was all set on making some vellum paper bags and sewing up the sides with a zig zag stitch, when Toby had to muck things up and tell me that my beach bits would be sooooo much better if I put them in jar. He always does this to me. I’m all settled on what I’m going to do and I go into his office to show off my nifty new idea and then he sends me a curve ball criticism that completely throws me off course and makes me doubt everything I did. A jar. A jar. A jar. I searched high and low for a jar that would be suitable. Toby suggested I look in the fridge since that’s where we keep ancient relics that we never think to look for elsewhere. Sure enough there was an ancient jar in the fridge. It was full of ancient Fusano California Valley Olives. They looked like they were a hundred years old. Out went the ancient olives and into a bowl of hot soapy water went the jar so I could soak off the label. And then I went back to my office to wait.

While I waited for the label to soak off I decided to screw Toby’s idea and I made my cute little velum paper bags with a zig zag stitch anyway. I think they turned out pretty cute. So cute that I bet you’re sorry you didn’t ask for one. 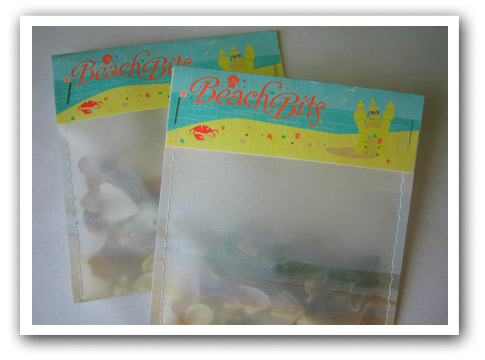 I also celebrated that a couple of stressful jobs finally went to press today and I made a little movie about beach bits for you. (3.79 MB, 2.18 minutes) (actually I made it for Amanda and my niece but you can watch it too)

Things have a funny way of evening out. Yesterday was probably the worst day I’ve had in a long time. I can’t even really say why. A lot of little unplanned attack surprises happened and left me on the edge of tears all day long. So when a Yosemite Water truck sideswiped my parked car today, you’d think I’d lose my cool.

Nope. Cool as a cucumber.

I think all the bad things that happened yesterday just wiped me clean of emotion. I don’t want to be completely detached but you know what, it feels a lot better than getting upset all the time. Maybe it was because the guy driving the water truck was probably the nicest guy you could ever meet.

He must have sat in his truck 30 minutes or more waiting for me to come out to my car so he could tell me what happened. He didn’t have to do that. He could have just driven off and left me with the $1,000 damage. It’s not the first dent in my bumper. I would have never guessed the blue paint came off his truck. I never even knew there was such thing as Yosemite water until today. Do they truck it all the way from Yosemite?

He not only waited and apologized profusely, he was smiley too. And when I told him I hoped the rest of his day went better, he acted surprised. His day wasn’t going that bad, he said. He told me that on another route he has, he has to squeeze down a narrow one-way street lined on both sides with mercedes benz. Now that would be a bad day.

So I guess it all depends on how you look at it.