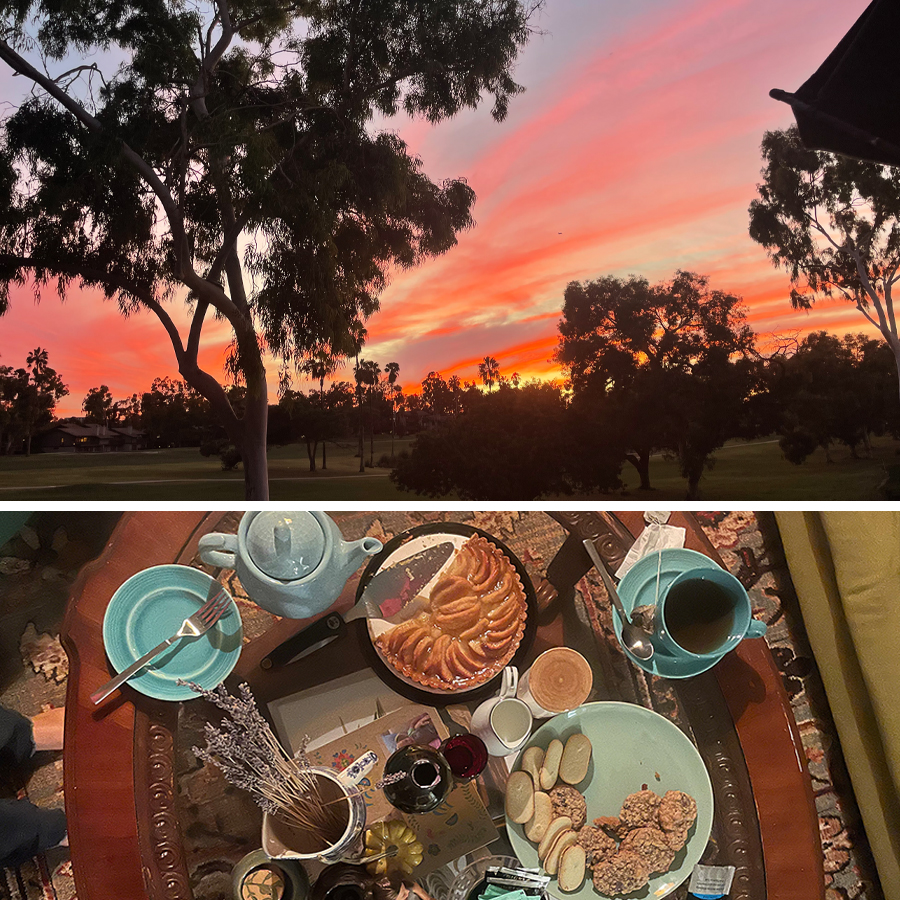 And just like that, we are wintering. It’s chilly enough to turn on the heater in the morning and at night. It’s dark all the time it seems. Days are so short. When I come home from running errands at 5:30 pm I just want to eat dinner and go to bed! In the summer I’d just be getting started on my after-work routines. What is wrong with me? I’m wintering I guess. I haven’t read the book yet but I can get on board with getting cozy and giving myself permission to sleep early. Getting up at 4:30 in the morning will do that to you. Early sleep is good sleep for morning people like me.

I’m not getting up quite that early anymore… I kinda roll around in bed thinking about getting up from 5  to 6ish. I no longer work at Ralphs. I miss it. I miss my four-hour intense workouts of pushing carts and running so hard that the hours pass like minutes. I’m so scared I’m going to lose all the muscle that I built up from that job, eat a bunch of holiday food, and blow right back to my old size. It’s been nice being thin and actually showing up all green on my Renpho scale. I know I might have some sort of eating disorder left over from my 90’s youth but I do love being thin. It’s hard to deny. I feel super healthy when my clothes are loose on me. It’s weird. Anyway, we are not going to fat-shame here. If I’ve learned anything from Bug’s generation it is that I am so proud of all the work they have done on this subject. I might still struggle with my mind but I do believe it’s lovely to be thick. Finally, thick thighs are cool! It’s about time. 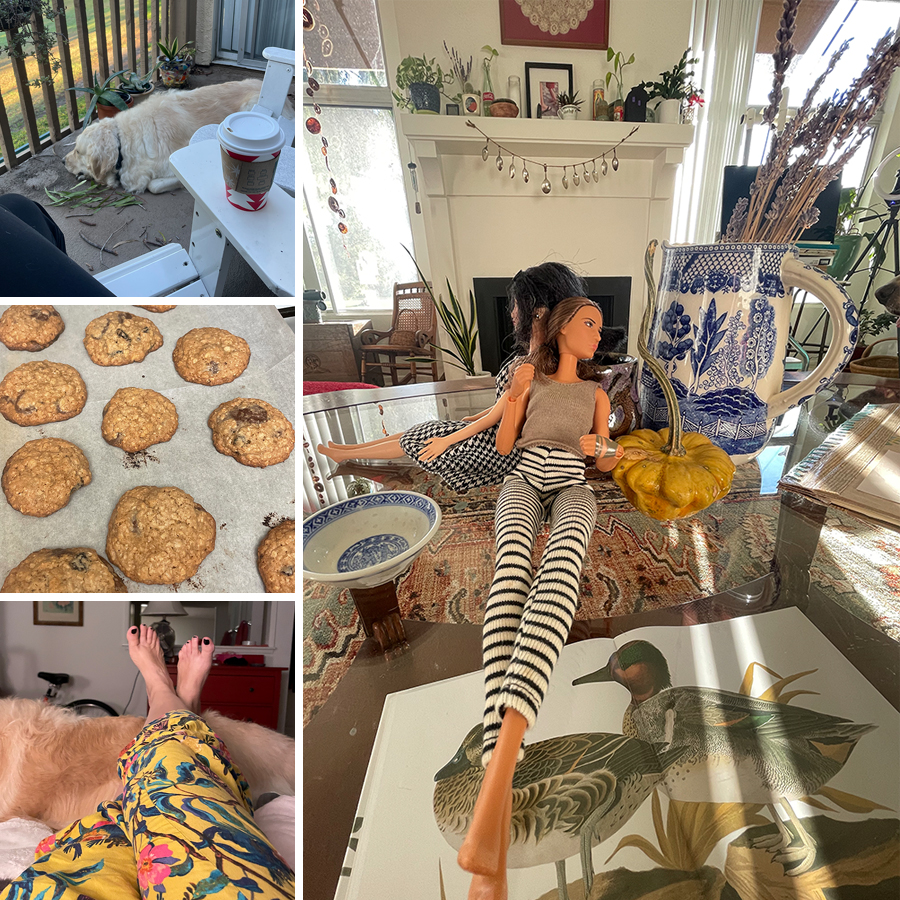 So yeah, wintering: baking, wearing pajamas at six, drinking all the coffee all the time, having friends over for wine and cookies… I love it. I love seasonal changes. 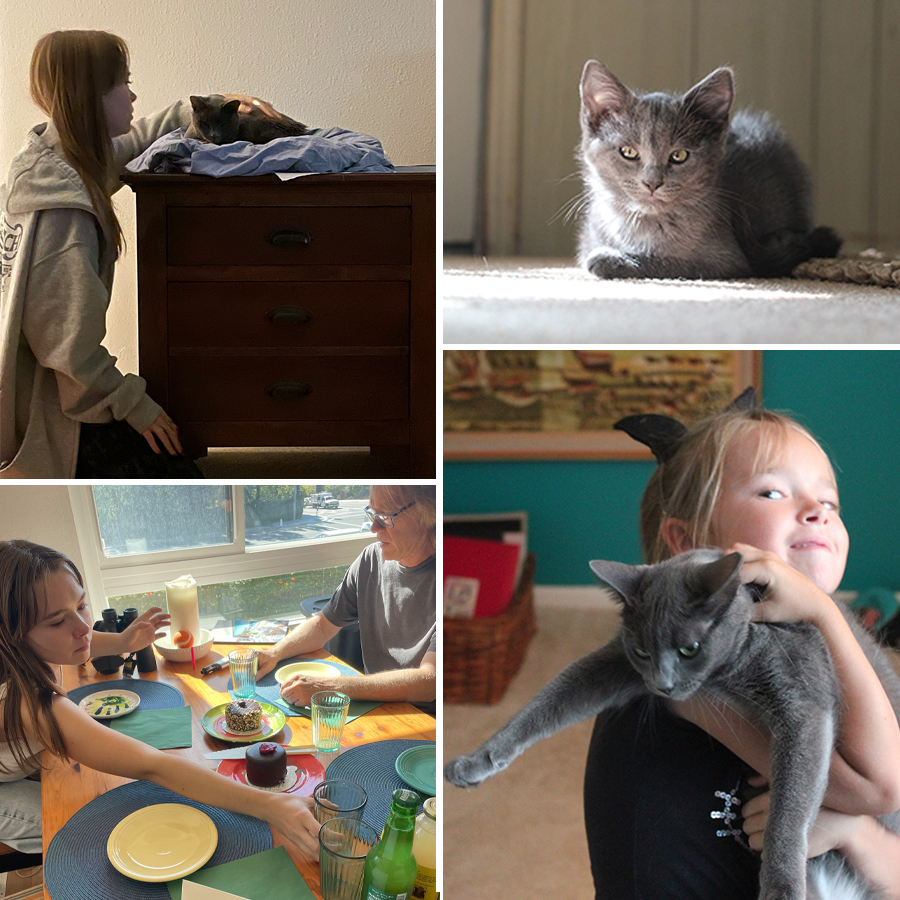 Sadly, we had another kind of wintering. Our old cat, Fiesta, who lived with Toby (Bug’s dad) passed through her own winter at the early age of ten. She died of kidney failure. It was unexpected. She was the daughter of Aqui, the cat we got when we lived in the sticks. Remember her? She was our neighbor’s cat but they couldn’t take care of her. She was six months old and pregnant. We took her to the vet to make sure she was healthy and our neighbors told us that she was our cat now because we could take better care of her than they could. I never meant to get more cats but they seem to come to us.

Fiesta was born on the day we had a fiesta. She and four other fuzzy gray siblings. When we moved in with Payam several years later I had to find homes for them because Payam had a cat and they fought terribly. It was so awful. I tried for months to get them to get along. Nothing worked. I didn’t know what to do and then one day Toby offered to take them as a gift to Bug who was heartbroken to give away her beloved cat. Fiesta was always Bug’s cat. She played with her every day. She was a special cat with all kinds of attitude and grumpiness. Everyone loved her. Toby and his girlfriend took to her immediately. Toby’s girlfriend especially doted on her and bought her all kinds of toys and treats and she didn’t even like cats before she met Fiesta. It was a bond.

So when Fiesta got sick everyone was a wreck. Bug cried for days. Toby and his girlfriend cried for days. It was horrible. They did everything they could to save her. They took her to the vet daily for transfusions but she got weaker and weaker until finally at one in the morning she died in her bed that he made for her in the shower. Toby took really good care of her. He’s always had a huge soft spot for animals. He made sure she was warm and in a quiet place, sleeping on painkillers. I want to think she passed peacefully but I’ll probably never know.

I’m afraid to even blog about cats passing because I got in so much trouble the last time. If you are a long-time reader you remember. But I also don’t want to not include it here because Fiesta was such a big part of our life and something beautiful came out of it.

The day after Fiesta died, Bug and I went over to Toby’s after school and had a small memorial for her. Just Toby and his girlfriend and Bug and I. Toby’s girlfriend, who is the sweetest woman ever, bought us two small cakes and ginger beer. We lit a candle that Toby and Bug had saved from Fiesta’s last birthday (Yes, they used to throw little birthday parties for Fiesta with canned cat food birthday cakes) and we set it on a bottle cap from one of the gingerbeers. Then we all had tiny slices of cake and told stories about Fiesta. It was really sweet. I don’t usually love to hang out with my exes. We have plenty of grievances with each other so it was really really special that we could put them aside and have a sweet time for Bug. Sigh… it was beautiful. 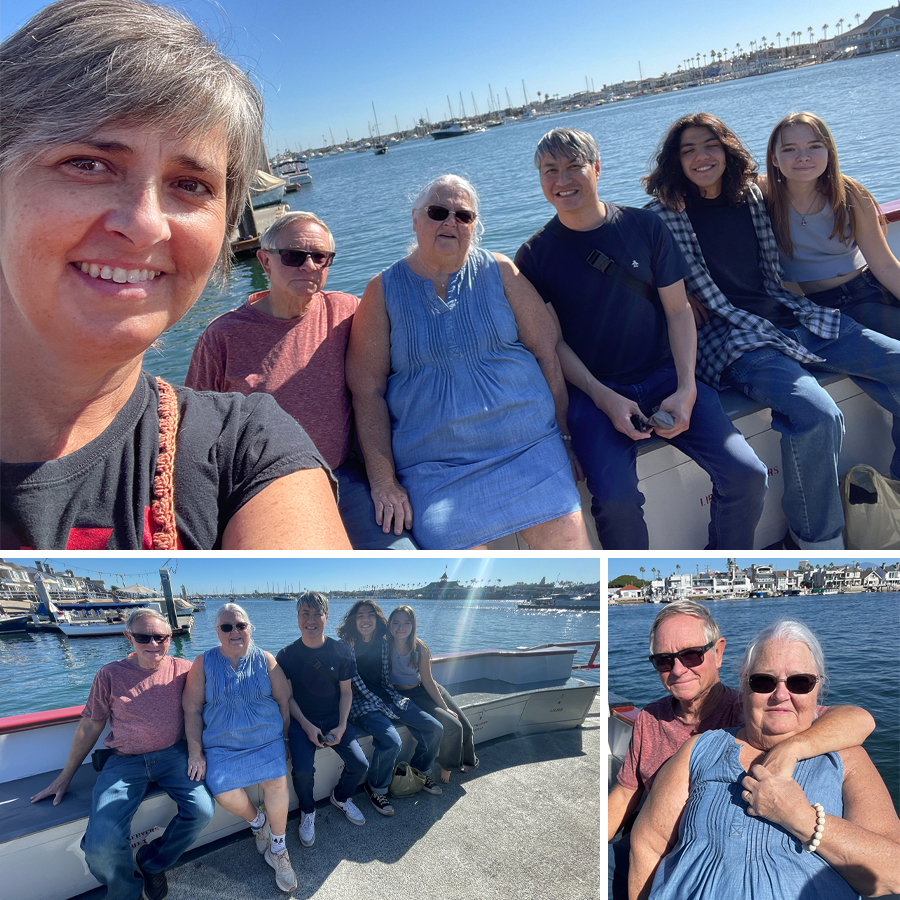 Okay, this is the worst segway ever but speaking of exes… (Oh my goodness, that is so bad.) I spent the weekend with another old ex. I know everyone wants to know whatever happened to Payam and why I’m showing up with a new guy all of a sudden. It was NOT my plan to break up with Payam and then start something new with someone else. I was going to stay single forever. I’m not the dating type. I was done with men. I swear. And Payam really did nothing wrong. I can’t fill in all the details about why I broke up with him but I did and it was long before I started talking to Matt. One had nothing to do with the other. I know nobody is going to believe me but I thought I would put it down here in case there are any deep stalkers dying to know. I mean, that’s what I google.

The timeline went like this: I broke up with Payam in March. I moved out.  I had a big fiftieth birthday party in July. Like you do!  I invited a bunch of old friends and one of those old friends was my first boyfriend, Matt, from college. He’s a mutual friend of mine and my best friend. We both thought it would be super fun to see him again. I invited Payam to the party. I invited Matt to the party. We were all going to be friends. Because I was going to stay single forever and I can invite all of my exes to my parties if I want to! That’s what happens when you turn fifty. You can do whatever the hell you want!

But then I got buzzed from all those Brendaritas and on a dare between me and my best friend, I decided I was going to kiss Matt for kicks. No one ever accused me of not being fun at parties.  I admit it was not my smartest move. I did it right when we were supposed to have cake and sing happy birthday. I’d given Bug strict instructions that she was in charge of the cake and that she should bring it out at 9:30. Suddenly it was time and no one could find me. Where was I? I was walking down the path away from the party with Matt talking about old times. And then under the fuzzy boozy moonlight, I asked him if I could kiss him and he said yes, which totally surprised me. I thought he was going to turn me down. I had no idea what was going on in his life. Meanwhile, Payam was back at the party just freshly broken up with and still figuring out what it meant to be “just friends.” It was rude of me to not think about his feelings. I left him for good reasons but I didn’t need to start something new right in front of him. Not literally right in front of him but just the same. It was unkind. He was back at the party getting deeply suspicious about me and an old ex. I still feel really guilty about it.

In my defense, I might not have ever really gotten over Matt. First loves can be like that. We have a lot of history. A lot. I always wondered what happened to him and thought of him fondly over the years. We lost each other in such weird circumstances. We’ve always had long-distance relationships and they didn’t work.

But here we are again. 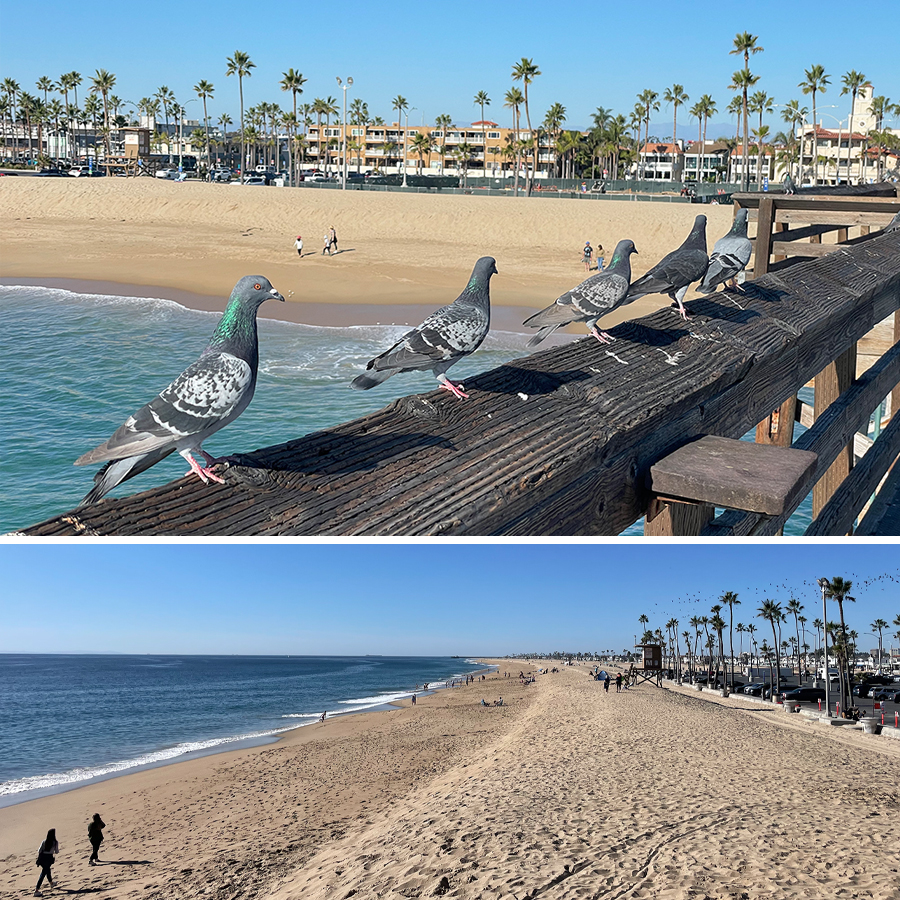 Matt lives in San Francisco and we spend one weekend a month together. It’s been really good. We get closer and closer every time. I have no idea what the future holds. But these weekends have been amazing. I like this part of being fifty. 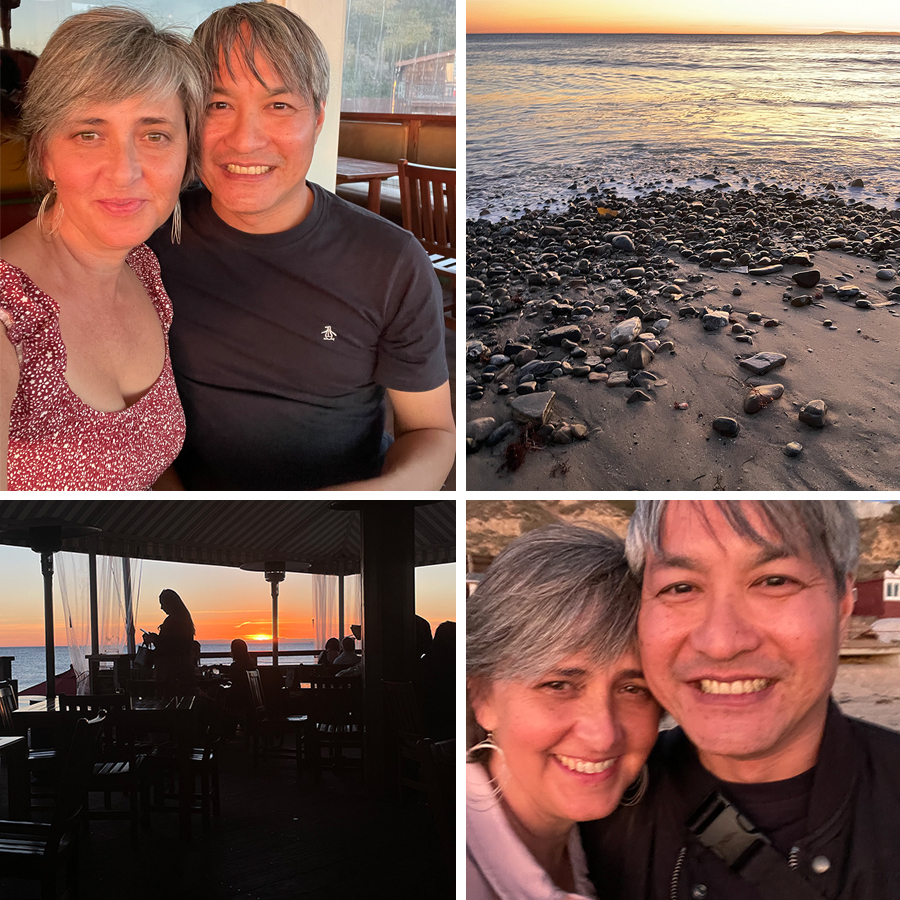 Maybe I’m crazy. I don’t know. I just hope this chapter lasts a long time. Not to beat a dead horse blog subject but you could say the winter of my life is just around the corner.