posted in Family Matters, Life Lessons, photography, The Desert on December 1, 2020 by SAJ 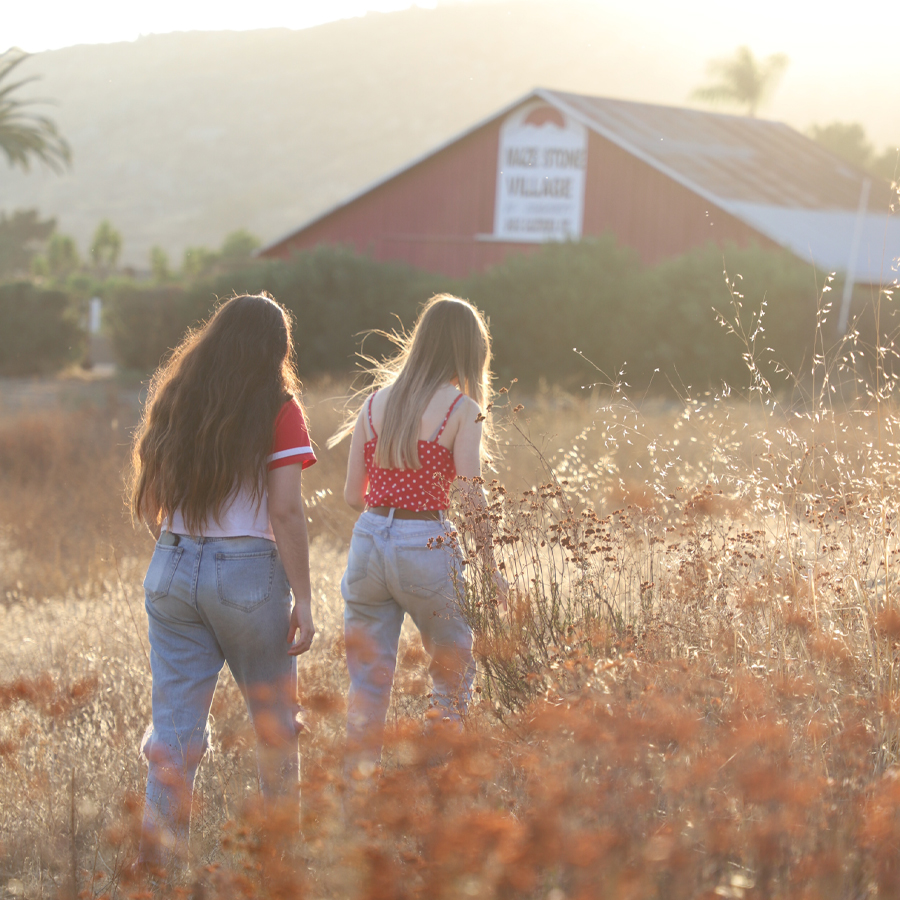 The girls and I drove out to the desert on Wednesday, the day before Thanksgiving. I always love an extra prep day and I knew my mom would appreciate some help since this is the first time she was hosting Thanksgiving since they moved to their new place. She had plans for us to do a little dusting but as soon as we got there we booked it out to the fields to catch a few photos before the sun went down. 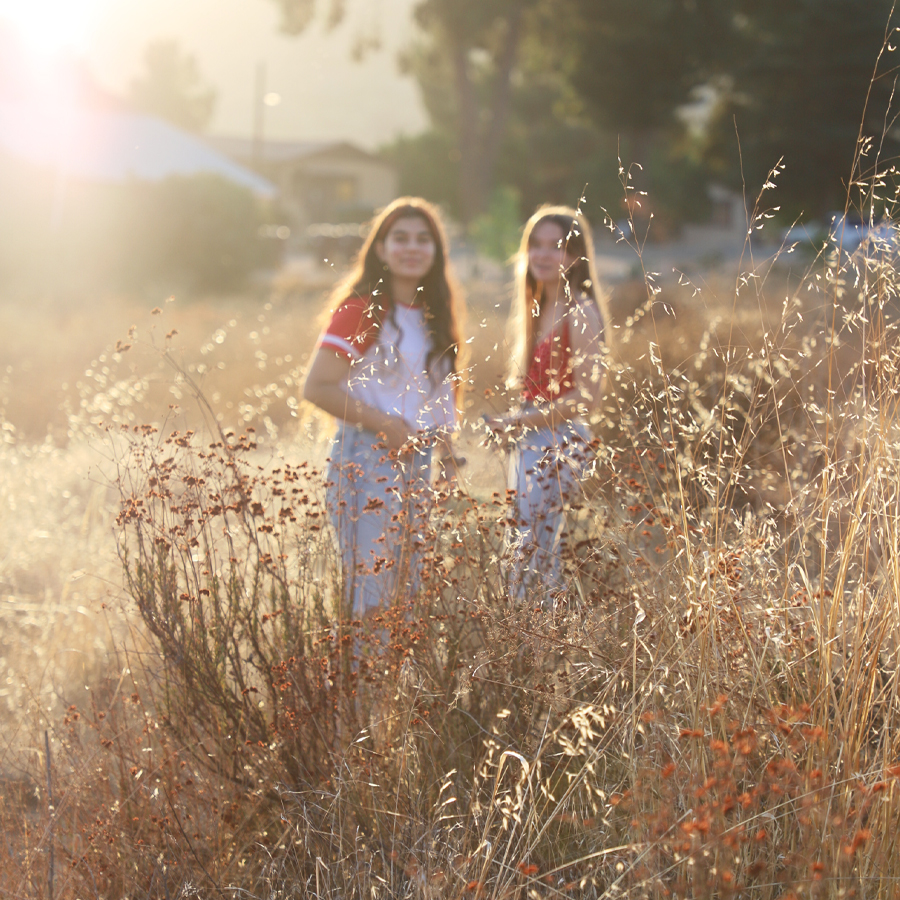 I mean, how can you not? It’s so beautiful out there! I love love love the desert. Lots of people in my family go on and on about how beautiful Northern California is with all its Redwoods, lush greenery and ocean views but I will always be a desert girl at heart. Give me some golden sun, some dark burgundy sage and some pretty views of the mountains through atmospheric moodiness and I am a happy camper. 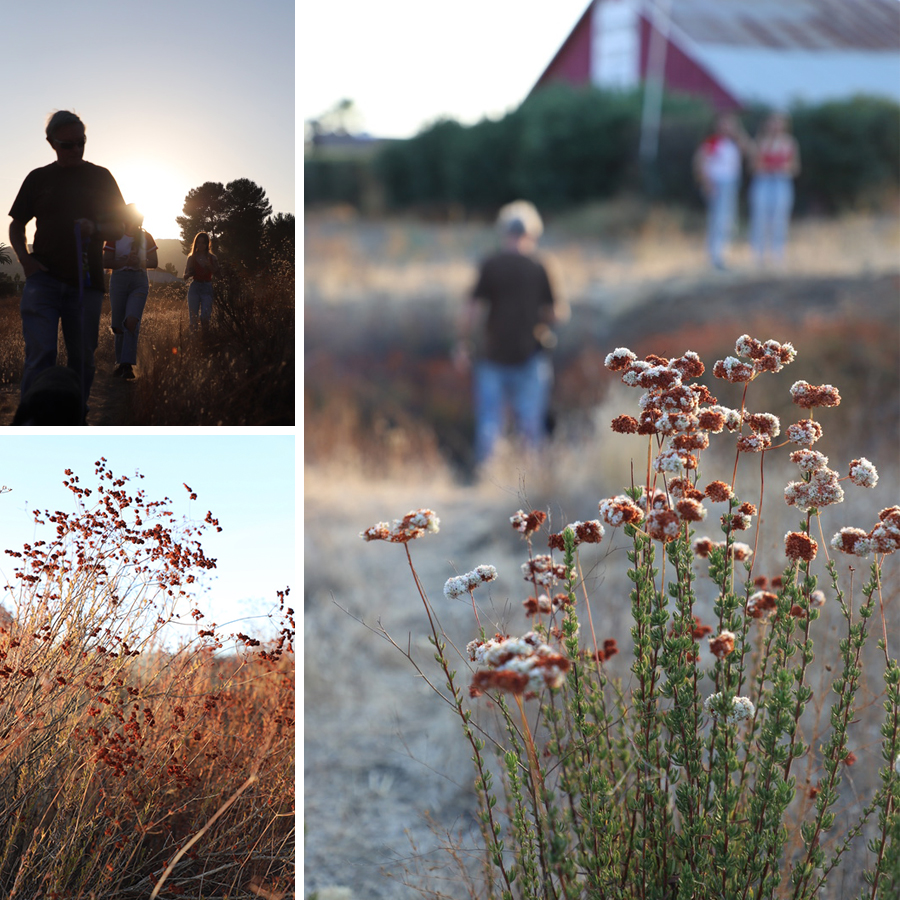 Little did I knew we’d get busted for climbing around our old favorite barn. 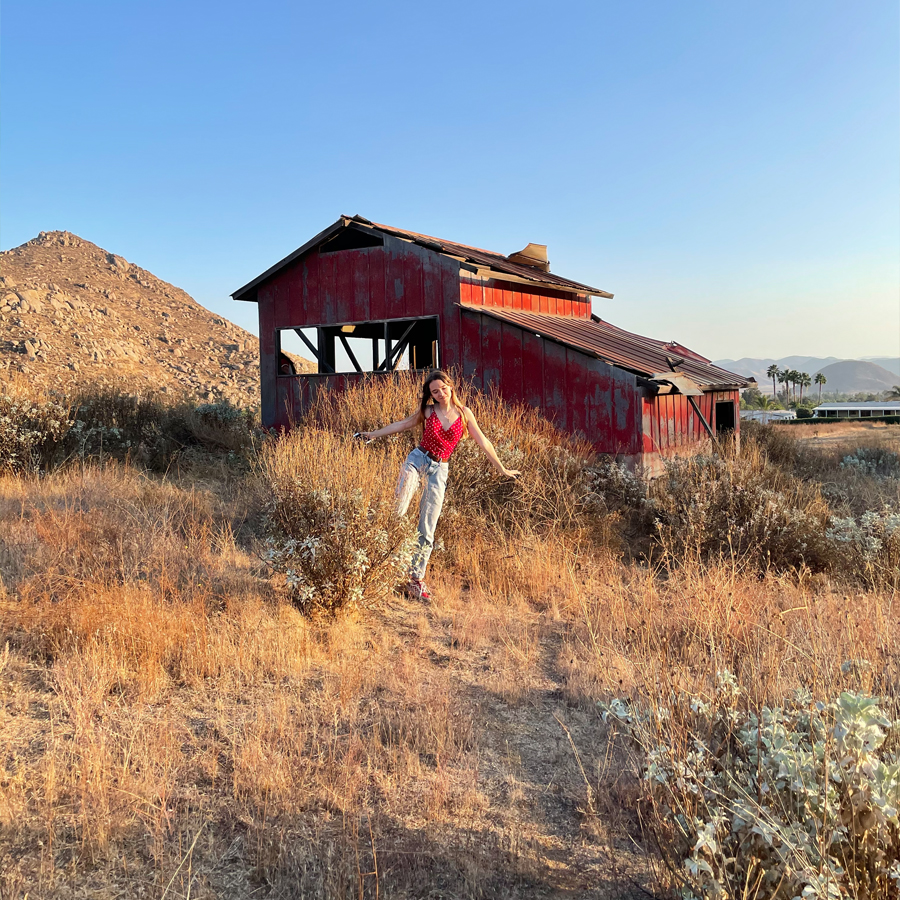 Apparently, it’s on private property and not part of the park that my parents live in. Bah Humbug. But you know me, I’ll still sneak up there and take a few photos of my #reinhartcanyonbarn. I’ll just be more careful and not let the girls go inside exploring. I should have known better. That rusty old building has tetanus written all over it. 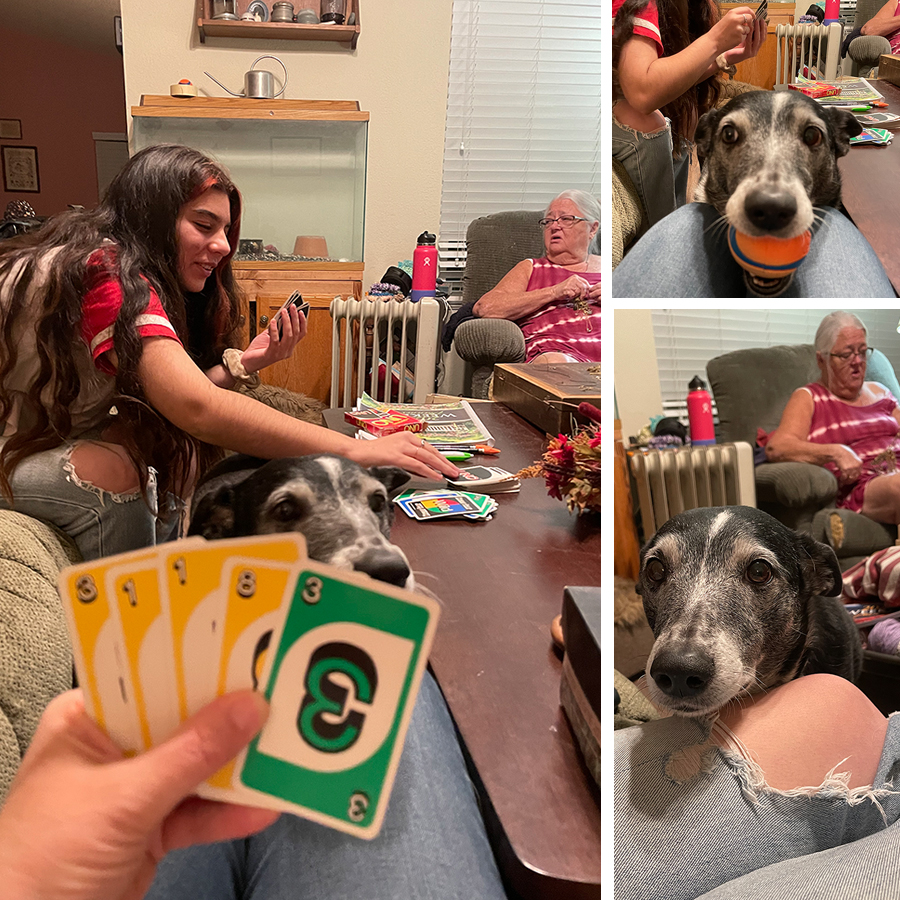 After our photography session and a spaghetti dinner, we settled in for an epic game of Uno and looking at Saturn with my dad’s telescope. 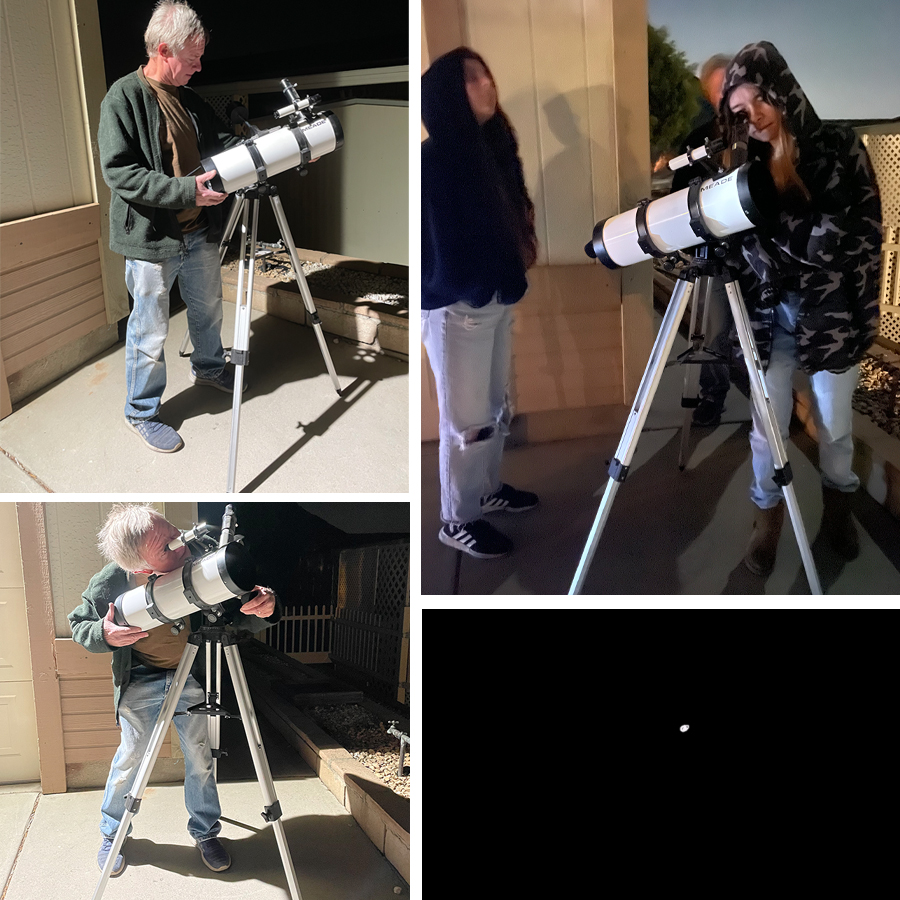 You might wonder how we could see anything with that bright porch light behind us but we could. We just had to wait for the automatic sensor to turn off and then peer through the long viewfinder. My dad showed us Venus and all of it’s moons lined up and then Saturn. You could see the rings just barely but if you asked me it looked like a piece of rice. To prove my point I have illustrated it in that black box. That’s pretty much what Saturn looked like to me. My dad is much more of a space enthusiast than we are but it was still fun. Any time we have together and we are not on our phones is a good time I say. 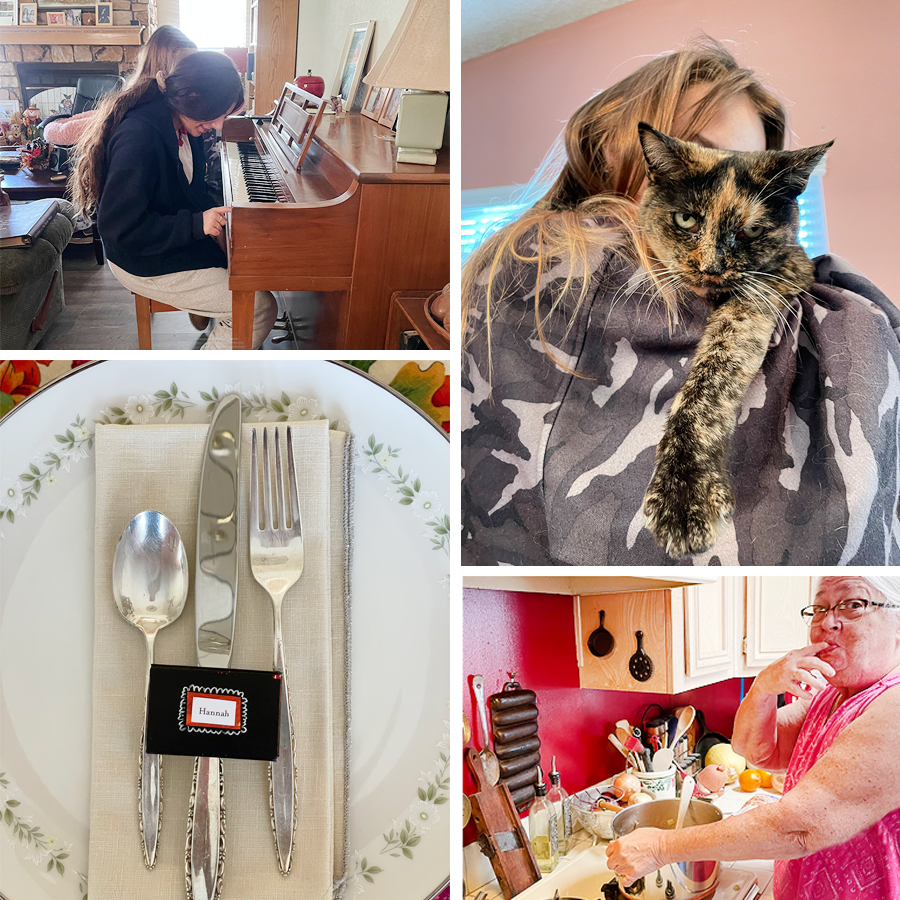 The next day my mom put the turkey in the oven at 9 am. I helped of course but I didn’t have much to do.  My mom’s oven is really old and struggled to keep a constant temperature. The turkey managed to cook but it took about two hours longer than it was supposed to which royally fouled up my plans to take our Christmas card photo at golden hour. I knew going into this that it would be a challenge to squeeze dinner and a photoshoot into one magical golden hour but I had high hopes.

And those hopes were dashed.

We did manage to rush out and take a few just-in-case shots before the turkey was done and those will probably be my only shots because wouldn’t you know it golden hour happened at exactly the same time as we were sitting down to dinner. It was excruciating to watch the sun set, glinting with golden light on the table while we served up stuffing and ladled delicious gravy. I was in agony.

But what can you do? Hold up thanksgiving dinner just for a photo? Eat it afterwards when it’s cold? I push my family a lot when it comes to photography, I knew that was my limit. 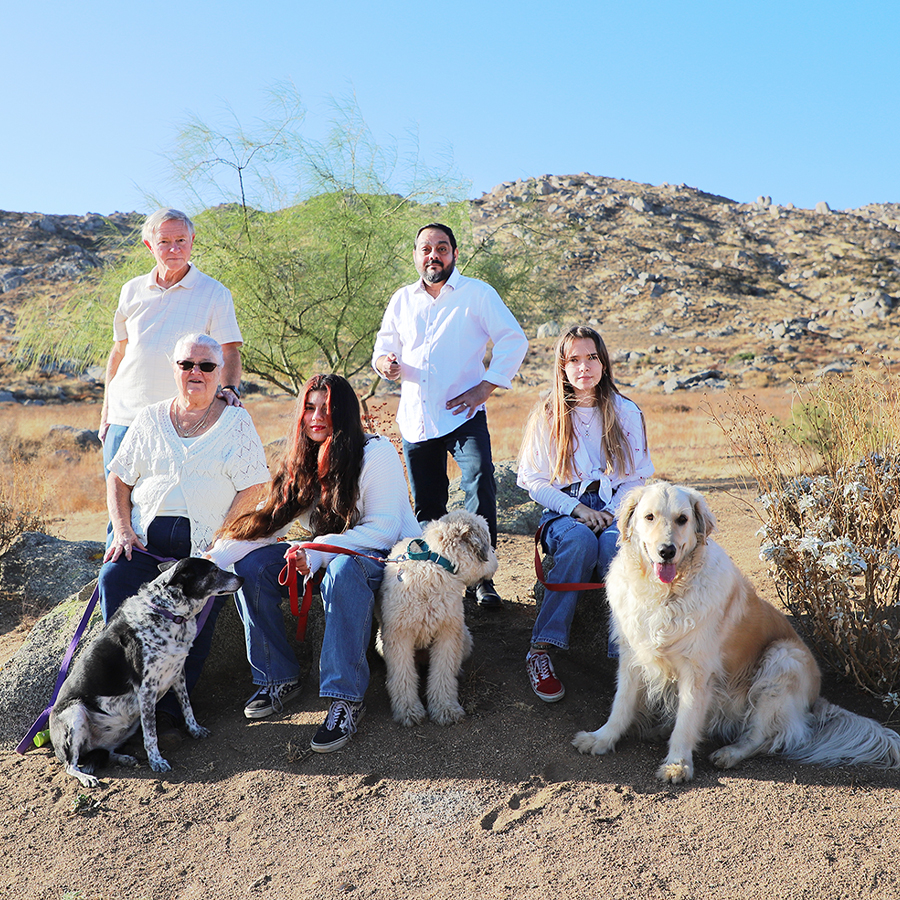 So here are the rushed shots.  I’m missing in this one. 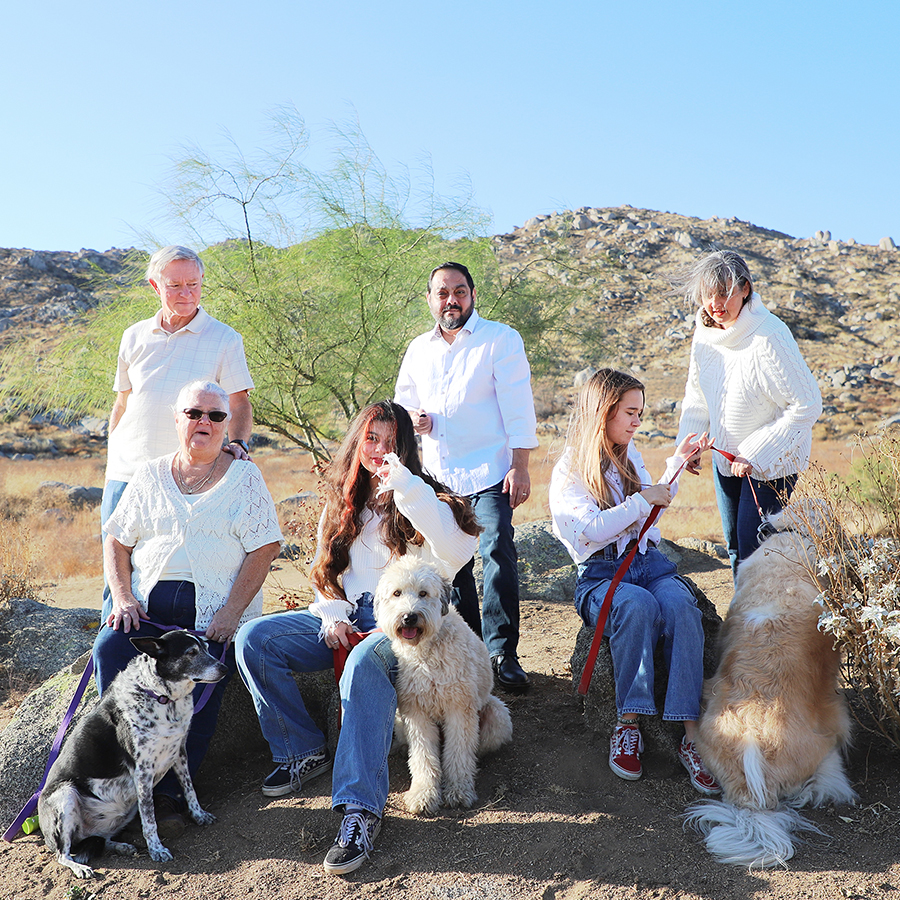 I’m dealing with Cody looking the wrong way in this one. 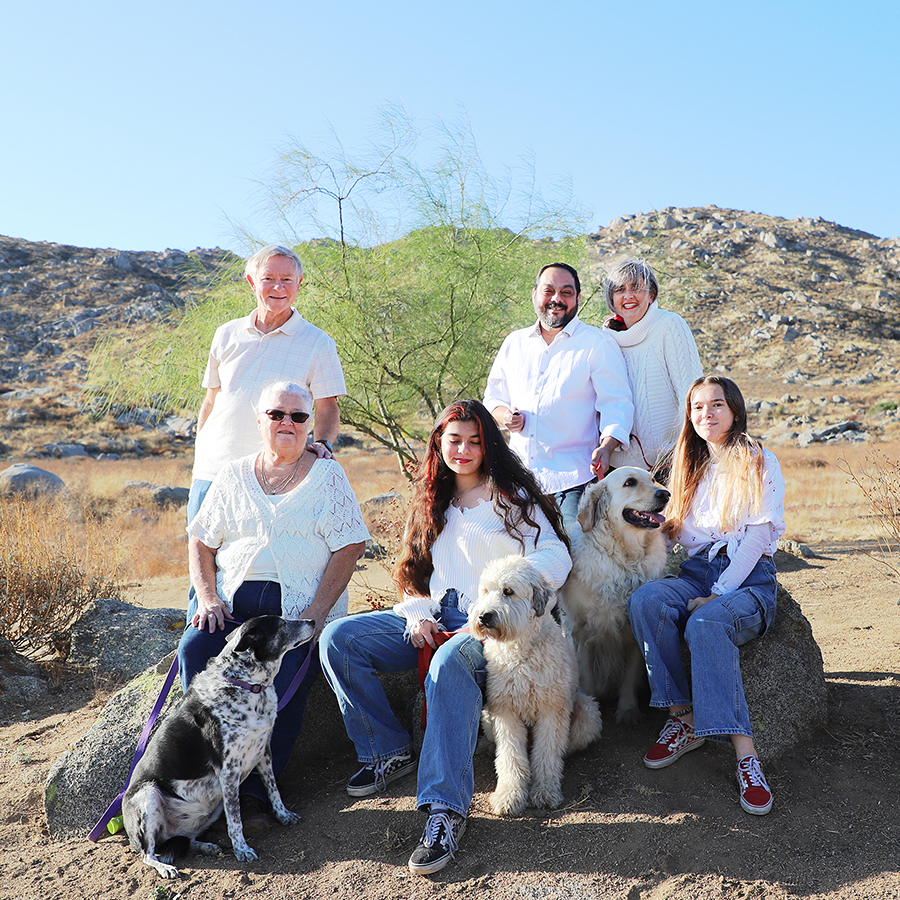 This might be a good shot but Bug is smirking and Joon is looking down. She prefers to look away from the camera. It’s a thing. 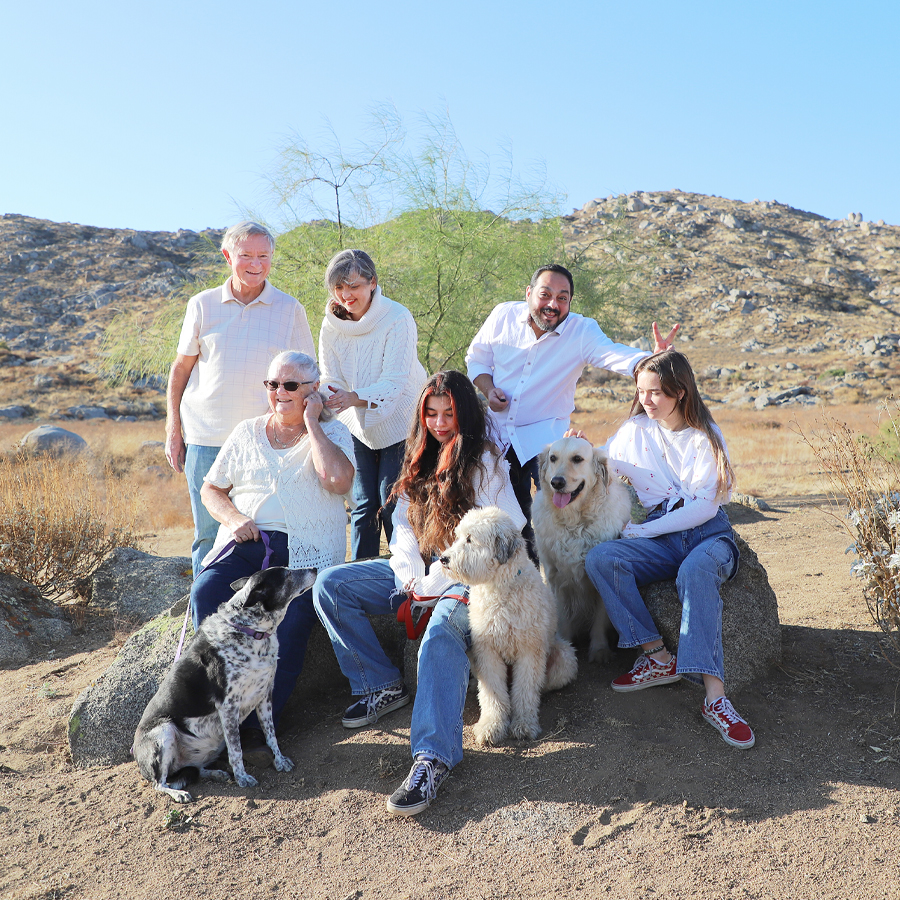 This one I’m fixing my mom’s hair that was blowing away in the wind that picked up. Which, by the way, I should mention REALLY picked up and even if we had made it outside at golden hour we would have been blown every which way. So I guess it’s not that horrible that dinner ploughed through my plans. 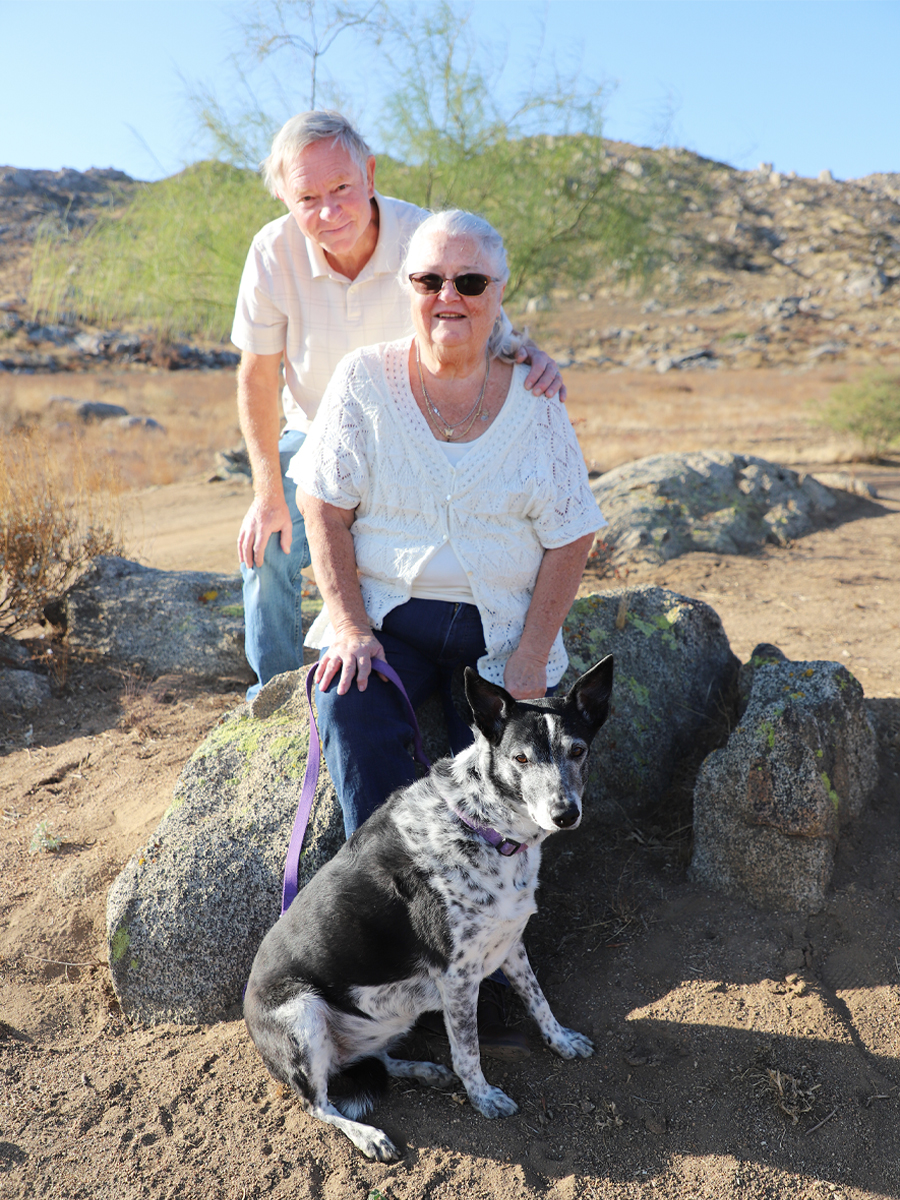 This shot of my parents and their dog, Spreckles turned out pretty good. 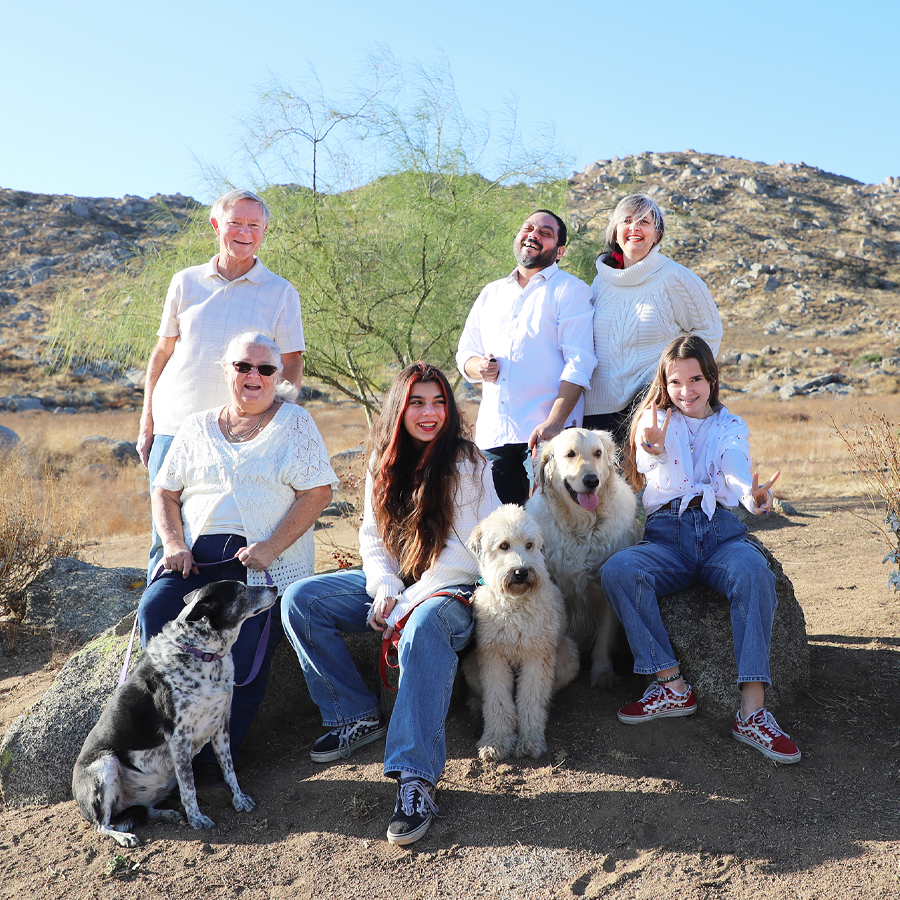 This is the best one of the bunch. It’s kind of hilarious and perfect. 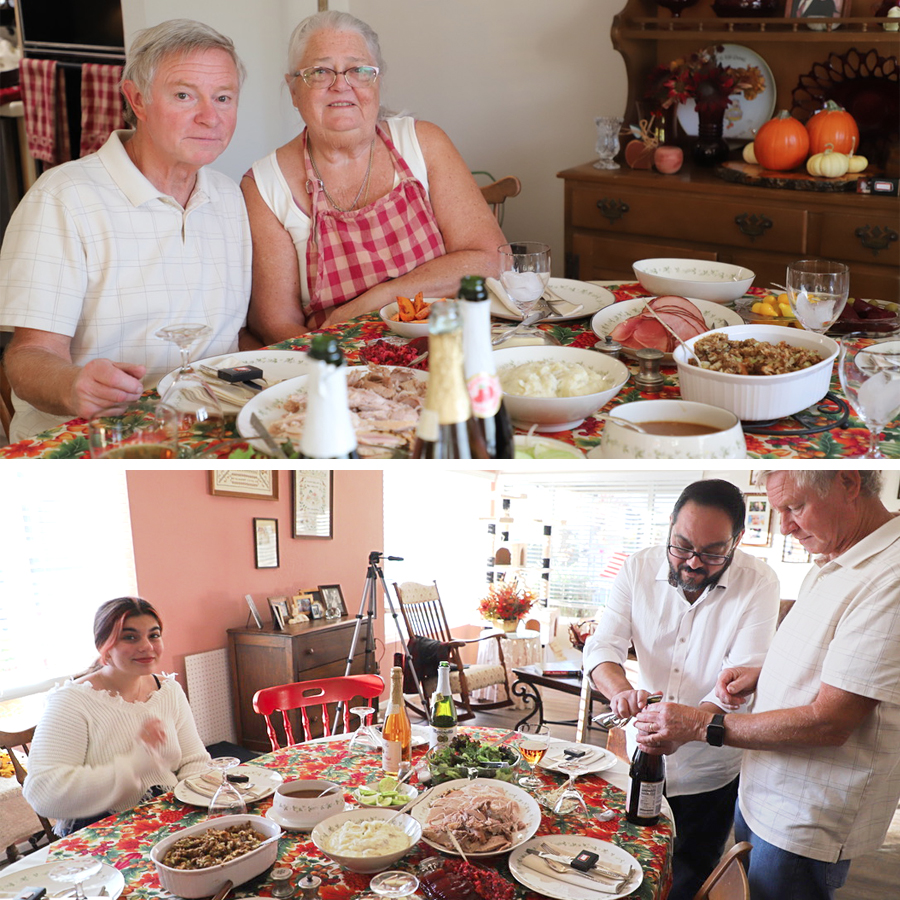 In spite of the oven not working and my roasted vegetables never making it past the super-crunch level of raw, dinner was pretty delicious. I remember when everything was going down I was surprised that my mom wasn’t as upset as I would be. If this had happened at my house I probably would have had a meltdown and be in tears. I’m wound so tight when it comes to entertaining, a broken oven would have done me in. But it wasn’t my house and my mom seemed surprisingly indifferent. So I took my cues from her and tried not to sweat it. I guess if you’ve cooked as many Thanksgiving dinners as my mom has, you know that something will always go wrong and it’s not the thing that’s going wrong that matters, it’s how you handle it.

I might not have a picture-perfect holiday photo but does anyone really love a perfect picture? Nah. Bring on the outtakes!