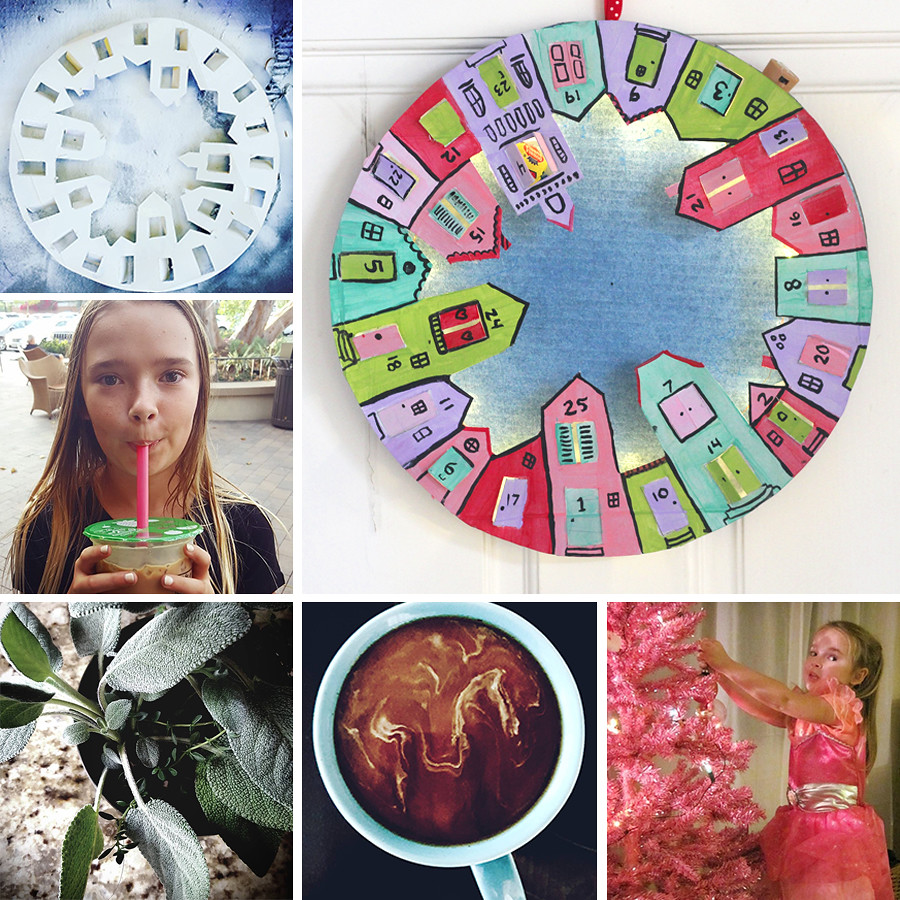 November started off a little rough for me. I had big plans of blogging everyday and participating in my own version of nablopomo. I was even thinking of telling stories from my Pet Hotel days (my parents owned and operated a boarding kennel when I was in my teens) but you can see how well that went! One lonely post showed up in November. Go Brenda.

I do want to get back to those stories one of these days though. Ask me about the time my brother and I were hiking back behind the kennel and we discovered a ditch full of freshly dead dogs. It was a Stand By Me moment if I’ve ever had one, even though my brother has no recollection of the event.

Anyway! I’m posting my pictures backwards so let’s just go back in time from the most recent to the least recent. Most of these photos are from Instagram. That’s where I hang out these days. If you follow me there this will all be old news. Sorry! Instagram killed the blogger.

First up: An advent calendar that is a village that is a wreath! I’m such an over-achiever. I like to cram three things into one because I can!  I’ve already made a few villages. You remember that tiny Hanukkah village? That was so fun, made out of raisin boxes. And my favorite village of all: The Milk Carton Village!  (who doesn’t love recycling.) And I’ve made a few advent calendars and even an advent wreath with lollipops! but never a village AND an advent calendar IN a wreath. Whatever whatever…we’re over it already. Who’s gonna go spend three hours hand-painting an advent calendar and lighting it and assembling it all in a bla bla bla stinkin’ wreath. Obviously only me. But it was fun and if you are crazy like me I recommend it!

Next up: Boba and Bug. Bug LOVES boba. She begs for it every mother-daughter date we go on. I’m wondering what ingredient is in it that is so addictive. Taro root? Sugar? Caffeine? Hmmmmm….

Get this: we are planning Bug’s twelfth (!) birthday party for January (I like to start early)  and we have happened upon the greatest party idea of all: A limo ride! It solves so many problems. She wanted a green party like the one we threw for her third birthday. (She’s not spoiled or anything, heh.) But I just couldn’t land on a cohesive theme for the party and  you know me. It has to have a grand vision.  These grand visions get harder to visualize when kids are old enough to muck things up with their own ideas.  Kids.

She wanted everyone to wear green and have some kind of loosely interpreted fairy theme with vines and flowers and fairy crowns and maybe a dinner party in the backyard and of course everyone bringing their Pusheen stuffed animals because that is a THING. So green, fairies, flowers, Pusheens, boba, green mochi…it just wasn’t coming together for me and I didn’t want to just do another galaxy party in a new color. Then I realized I could make all her friends wear green, take them on a trip to get boba in a limo, maybe make a few other stops along the way to do fun green-themed adventures (green piñata in the park maybe?) and then drop them all back home for a green dinner with green mochi ice cream for dessert! Brilliant plan! I’m sure I will keep you posted on that progress.

Le sigh. Remember her pink phase? I’m so glad I had a daughter. I’m also so thankful for an extra daughter. I’d take 12 daughters if I could afford them. I think Joon wants a race car-themed birthday this year. That should be interesting. Like daughter, like father. They are both really into cars which is completely opposite of me. But I do love a challenge. 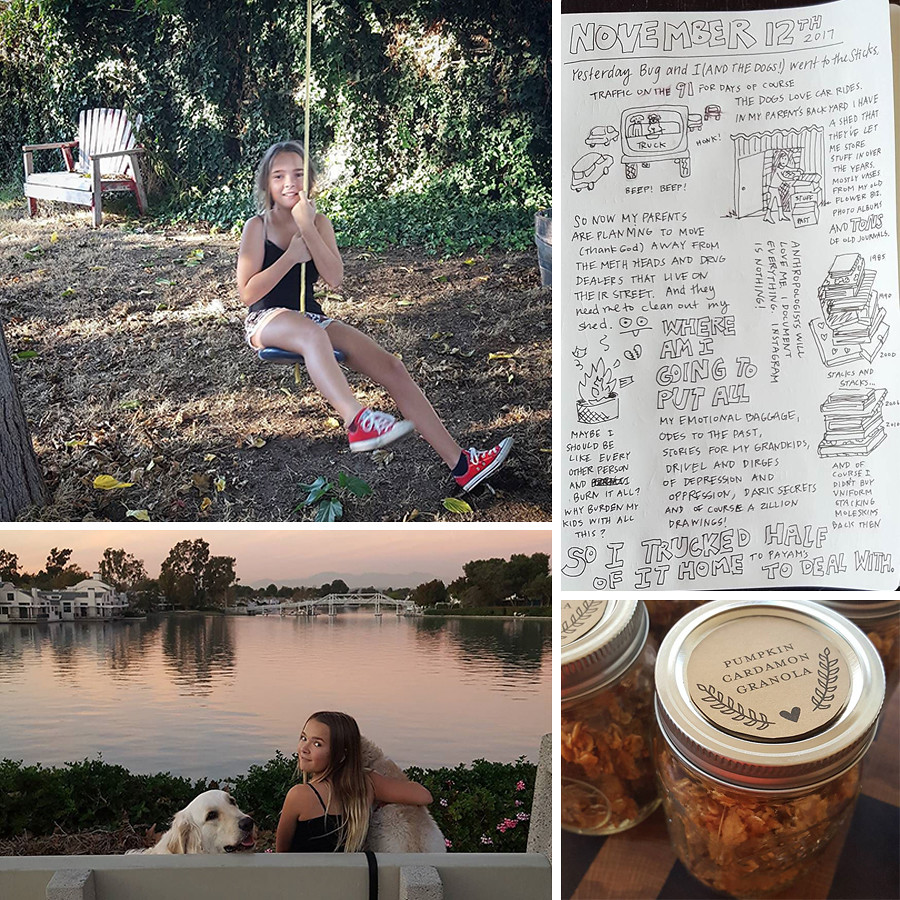 Next: The sticks. My parents are planning an eventual move from their property. This is good news as their neighborhood has gone south in the past ten years. Drug dealers and users and half-way houses full of people who aren’t really serious about rehabbing have moved in and increasingly deteriorated the safety and beauty of their neighborhood. It’s a sad state of affairs. While they plan to sell their property they are packing everything up and planning on moving to Idaho which is crazy far away for me. BUT I have grand plans of visiting them and taking vacations there. This means they are giving everything away and forcing me to clean out the shed that I used to store old things in that I wasn’t quite ready to get rid of. Yep. No more free storage for me.

I took a trip out there and cleaned out my shed.  It was a task and a half. I brought back box after box of old journals, tons of yellowing photo albums, flower-business supplies, artwork, certificates, awards, newspaper clippings, yearbooks… all that stuff. And guess what? I don’t want it!! I went through a few journals and they are SO BORING!!! I thought I’d save them for Bug but I couldn’t even get through them myself! Who really cares what the weather was like in 1986?!!

I chucked my old yearbooks. I don’t care about them anymore. I took all the photos I cared about out of the old non-acid-free albums and organized them into a box full of labeled ziplock bags. It took forever and I sneezed for days from all the dust but it’s done and I’m happy to report I only have one box full of photos left. Everything else I either tossed or squirreled away in Payam’s house where nobody will ever really notice it until we have to move someday. I’m really good at squirreling things away. It’s always a super rude awakening come moving time. 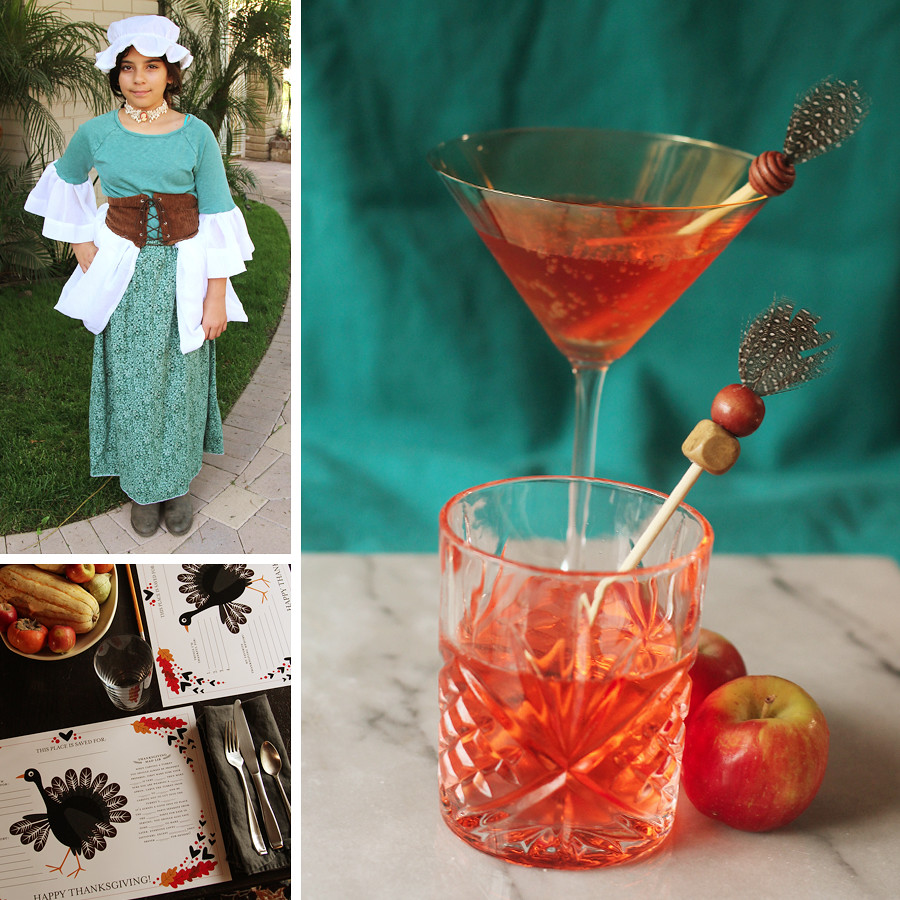 The big news of November was THANKSGIVING! More on that later. For alphamom I made some drink-stirrer thing-a-ma-bobs that look really cool but aren’t that useful since I don’t think feathers are dishwasher safe. But they are really really easy to make and everyone loves an easy craft. (Except me!) If you’re looking for an easy but impressive gift for your lush friend who likes to throw boozy parties, these things would be the ticket.

I also made some mad-lib style placemats that I think would be a hoot for a thanksgiving with a lot of kids. Too bad Thanksgiving is already over but save this link for next year! 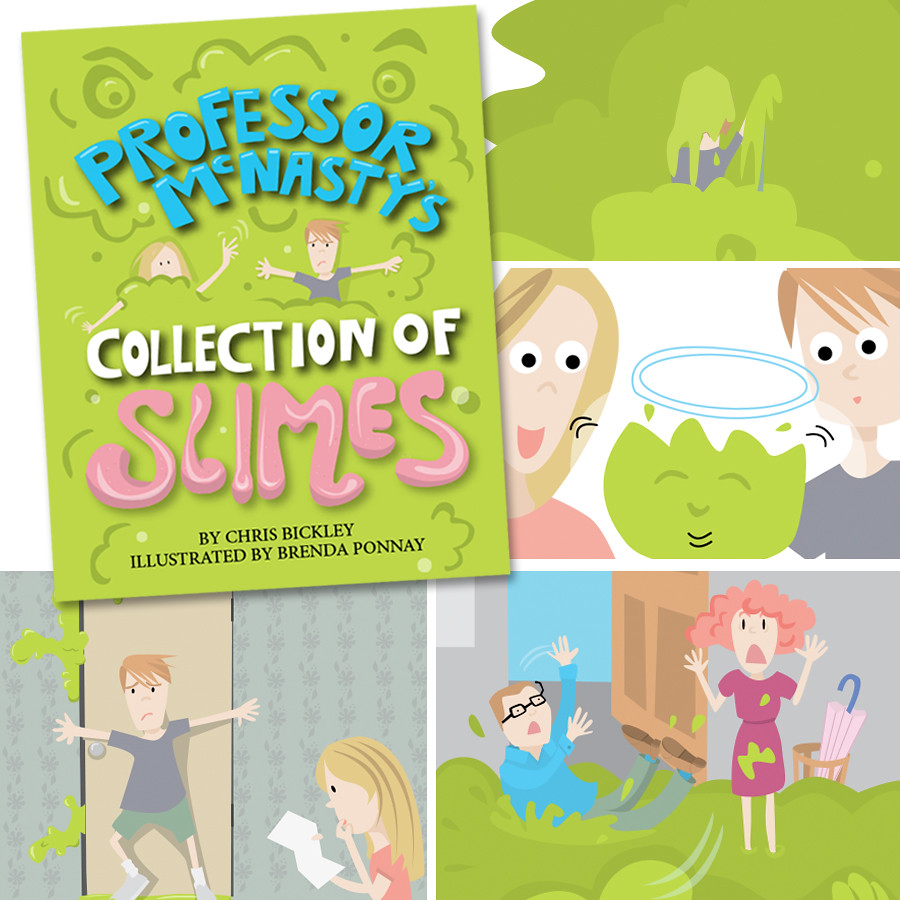 ALSO in the news, I have a new book coming out. I don’t know the exact date yet but I finished it in November and it is in the publisher’s hands now. I will keep you posted to that when I know more.

It’s actually written by my friend Teri’s (of mettaprints) husband, Chris, and it’s all in rhyme. I had the idea of writing a story something like a Dr. Seuss style Cat in the Hat but involving slime because I hate slime and it has sort of taken over our house and contaminated everything. I never got around to writing this story but shared my idea with Chris and he wrote it for me! It’s really cute and really long so you’ll get your money’s worth of illustrations out of this one. Though you might hate us if you have to read it before bedtime too many times.  I’m excited about it.

Speaking of books, did you know you can hear me read my own books on epic!? It is the coolest thing ever and I can’t believe I never looked into it before now. I recorded a few books for my publisher years ago but never really investigated where my voice went to. I don’t read all of them (thankfully, my voice is horrible!) but I do read a few like “Be Mine” and I think the bunny books too. Anyway, if you have epic, you should head over there and take advantage of that. It’s really cool. 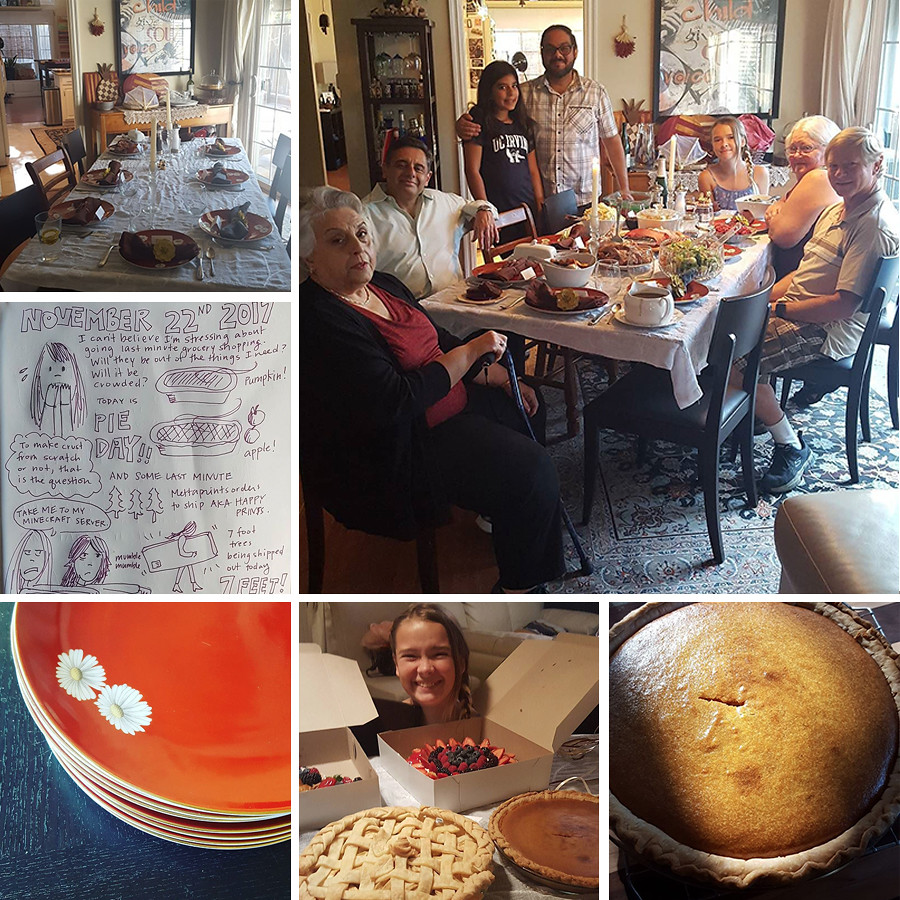 But the big news of November is THANKSGIVING! I finally pulled it off you guys! I made a turkey from start to finish (with the constant help of a good friend via text) and it turned out GREAT!!!! It was the best turkey ever!  I was so stressed about it too. I’ve had a few flop dinners served to Payam’s family and I have been living in shame over it secretly for years. I really want to be a good cook but I just never quite got there. I do like to cook and I do cook well a lot of the time just not 100% of the time. It’s been a source of stress for a long time. But this year I conquered it and now I can’t wait to do it again!

Everything went smoothly. Everything was done on time. Everything even tasted great! I think I’m more proud of this silly thanksgiving dinner than I am of all the parties I’ve thrown over the years. It’s funny how some things are just a thorn in your side. So phew! Turkey achievement unlocked! 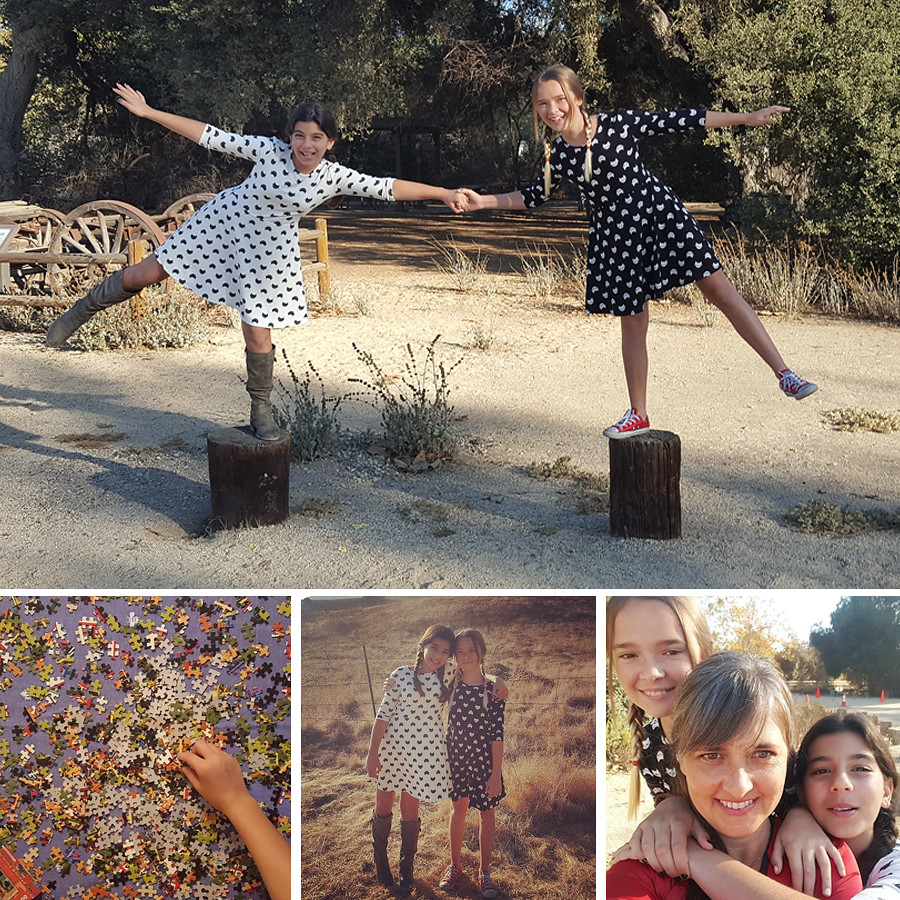 Next up Christmas! Except this Christmas is going to be kind of sad for me. Bug will be spending two weeks in Hawaii with her dad (lucky duck). While I’m really excited for her to finally go on a trip he’s promised her for years, I am going to miss her like CRAZY! I feel like I finally figured Christmas out last year and I really want to keep the traditions going but it’s kind of hard when you’re missing one kid. I’m sure we’ll manage and Joon is a very good stand-in kid. But it will be weird.

All for now! Hopefully I’ll be back here again soon!