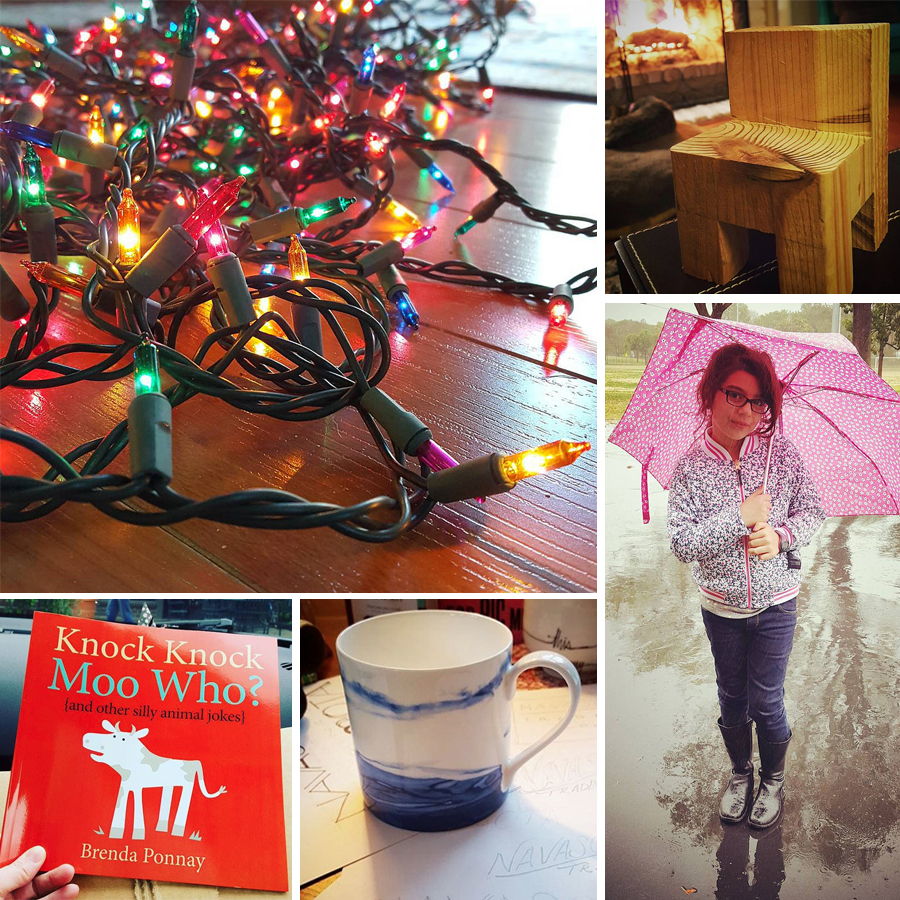 Somebody has to keep track of all the things we do around here. Otherwise it’s like when your ex calls your kid and even though you’ve spent all day doing something super family-oriented (like say, apple-picking! or an epic bike ride to the beach!) your kid says all they’ve been doing is watching tv because the television has been on for the last 15 minutes. Don’t you hate that?

Anyway, it’s January and I thought I should catch up this blog a little so I can instagram my new banner (is it blurry or is it just me?).

1. Christmas lights down! I always love the fresh clean purge feeling in January.

2. Payam is making little chairs with his many wood-working tools. Aren’t they cute? I think I might have to set up an Etsy shop for him

3. My joke book is out. It’s actually been out for a long time but I finally got my hands on a copy and I found it refreshingly funny. It’s been long enough that I’m not sick of the illustrations anymore.

4. Deb gave me a mug. Isn’t it pretty? You can buy them locally here. But I think you’ll have to call them up or actually visit the store because they are not online. Though they are online here which is handy if you live in the UK but not so handy if you don’t.

5. It’s been raining cats and dogs here in Southern California. Maybe you’ve heard?We’ve had day after day of continual dropping rain like we’re Seattle or something. That verse is making a lot more sense now.  We are all very hopeful that it will make a tiny dent on the water shortage.  The kids think umbrellas are toys and have been blowing them in an out with wind until the spokes break. I’ve been enjoying wearing coats. I think I might actually have to invest in one that fits properly now that I use it to actually keep warm instead of just for fashion. 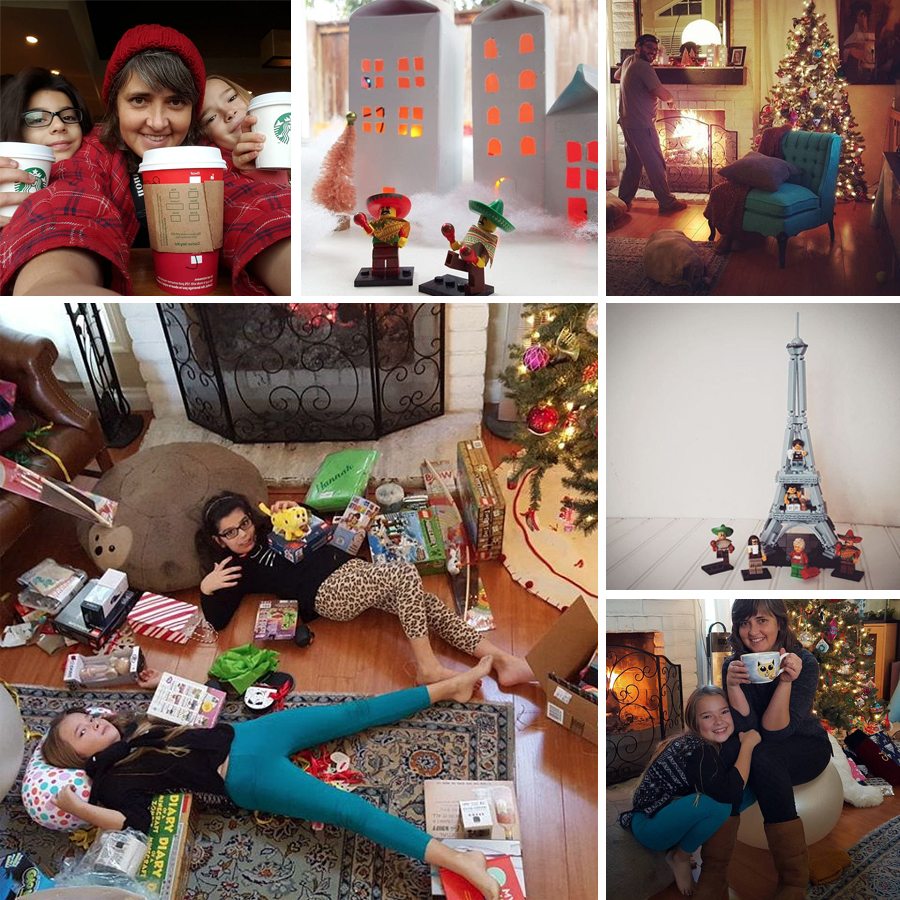 6. The girls and I went on an early morning bike ride. Our hands got so cold from the wind on the handle bars that we had to bike to Starbucks for hot chocolate that I thankfully could pay for with my phone because I didn’t take my purse with me. Yay for apps!

7. Cute Christmas village made out of milk cartons! Also LEGO people ftw! I got a ton of new LEGO people for Christmas (because somebody has access to my amazon wish-list and knows how to use it with abandon.)

8. My yellow chair is now turquoise as a nod to my old turquoise wall that I sorta miss. But guess what? I drove by it a while back and whoever moved in after me kept my turquoise wall. That tickled me obviously. May it live on forever!

9. The kids laying in all their Christmas loot. They’re not spoiled at all. Nope.

10. Bug made me a Cat Pooping Rainbows latte mug that is the size of a soup bowl (because it is). She’s awesome like that. 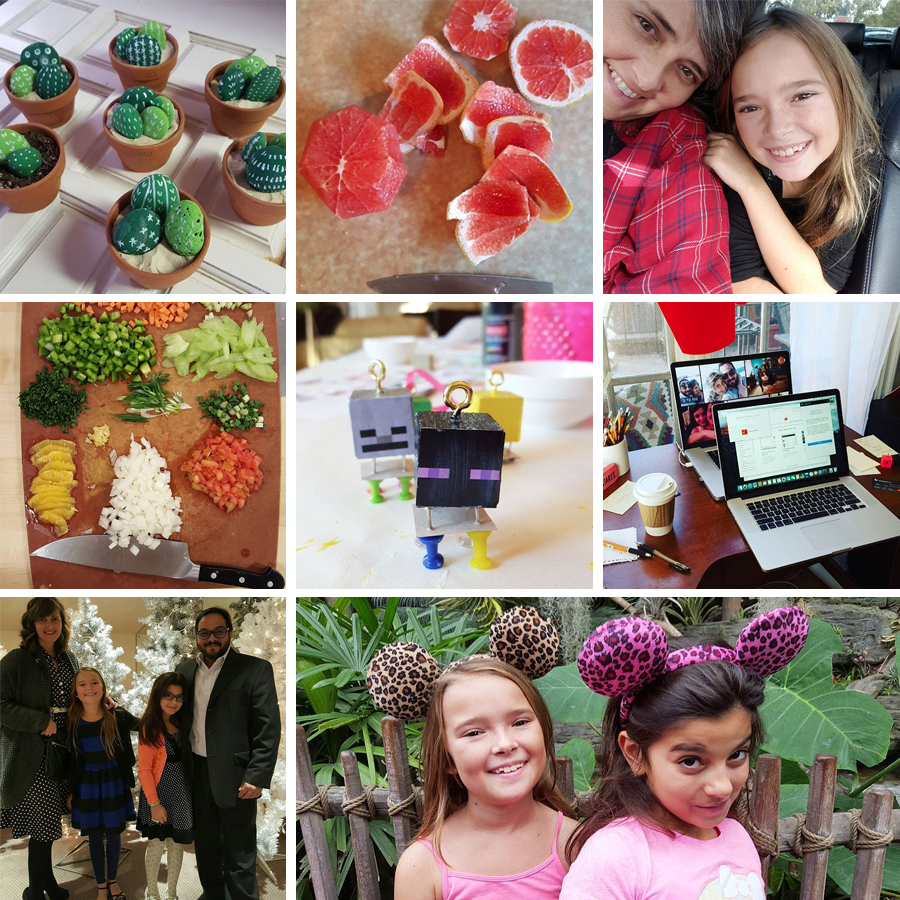 11. I made those rock cactus plants that have been going around pinterest. They sort of turned out. But I stuck them in air-dry clay and then covered that with dirt and unfortunately not all my rocks stuck 100% effectively and there were some dirt all over the carpet mishaps during unwrapping. Doh!

12 and 14. Payam and I took a knife skills class at Sur la Table and now I know how to supreme (that’s totally a verb) citrus.  It’s very fancy and makes grapefruits taste about 110% better. We also got a free knife for taking the class (as we should since it cost an arm and a leg.) and that thing is SHARP! It’s very fun to use but also very scary. I think I’m developing a phobia of fingers being cut while cooking because I watch Chopped too much.

13. Me and Bug. Not much to explain there except maybe that I’m getting tricky with cropping out my double chin.

15. Minecraft ornaments! Totally Bug’s idea and probably one of my more popular posts on Alphamom.com. Way to help me out with trends, Bug.

16. This is big news. I bought myself a new laptop. It was really scary for me because Toby has always been my IT guy since forever and I thought it took months and months of research before making such a big purchase. It turns out apple only has three choices so it took me about five minutes to figure out I better buy the one with the most terabytes.  And get this: I actually bought a new one before the old one crashed on me.

17. We got all dressed up (Bug wore a dress twice in one month–gasp!) and we went to see The Nutcracker. I had bought the tickets back in August and have been waiting patiently all year for it to finally happen. I had visions of the girls getting excited about it like I do and surprisingly they did. Payam wasn’t as big a fan but he was a good sport.

18. Disneyland! Man, we did everything in 2015. (Free tickets helped.) But we didn’t make it to camping which the girls have reminded us of every chance they get. Hopefully 2016 will be the year of the family camping trip if El Niño ever moves on. 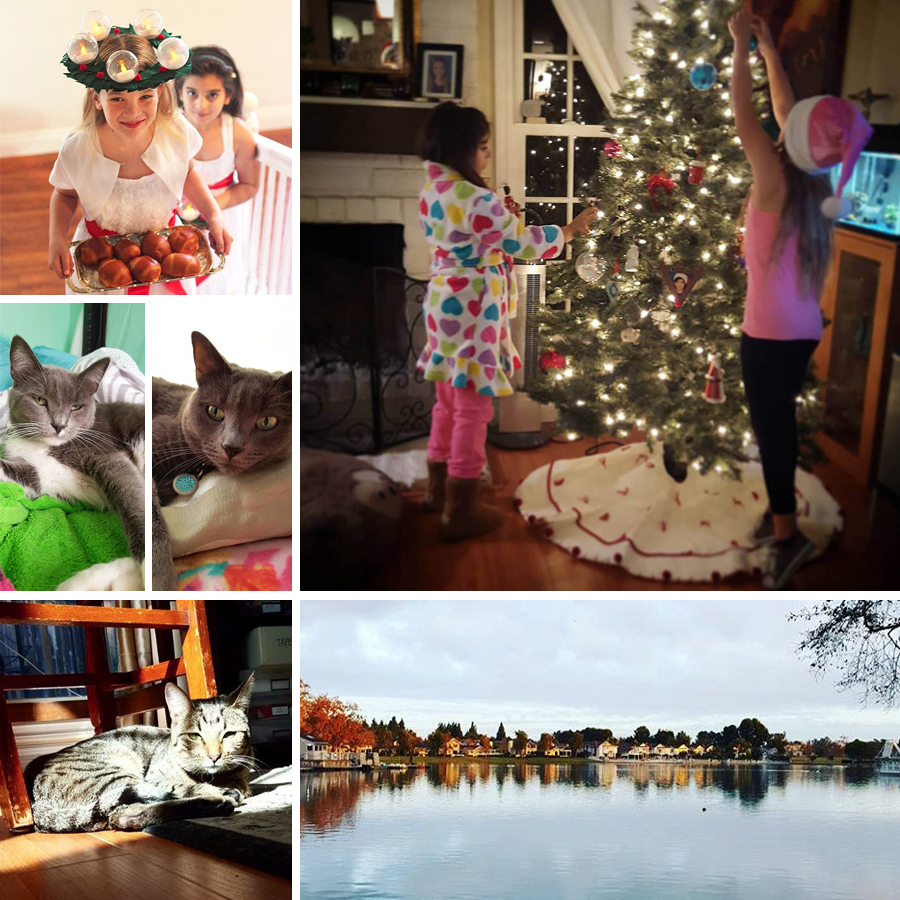 20. Christmas tree decorating (hmmm… these picture do not appear to be in order.)

21. The cats. This is a hard one. I’m not even going to blog it. It’s still too hard and too raw. My mom has my cats now and they are moving into a new loving home soon across the street from my mom where she can check on them everyday. We miss them.

22. I’ve been taking yoga everyday at a local studio that offers 6am bootcamp style classes. It’s brutal and expensive but I’ve been consistently getting up before the sun comes up and hauling myself off to class. I hate it and I love it. Maybe I hate it more than I love it when I’m sweating bullets and trying to hold up a sideways plank post but I think I’m going to stick with it and possibly someday have a real yoga body. I think what keeps me going is that it is so expensive and I don’t want to waste my money and the fact that every morning I spend a good hour all to myself doing what I want. It’s quiet and peaceful and I feel like a million bucks all day long afterwards. This is a picture of the lake across the street from the yoga studio. I’ve been uploading little periscope movies that are terribly unedited and LAME but it’s keeping me going because I know two or three people are looking for my lame posts and cheering me on. 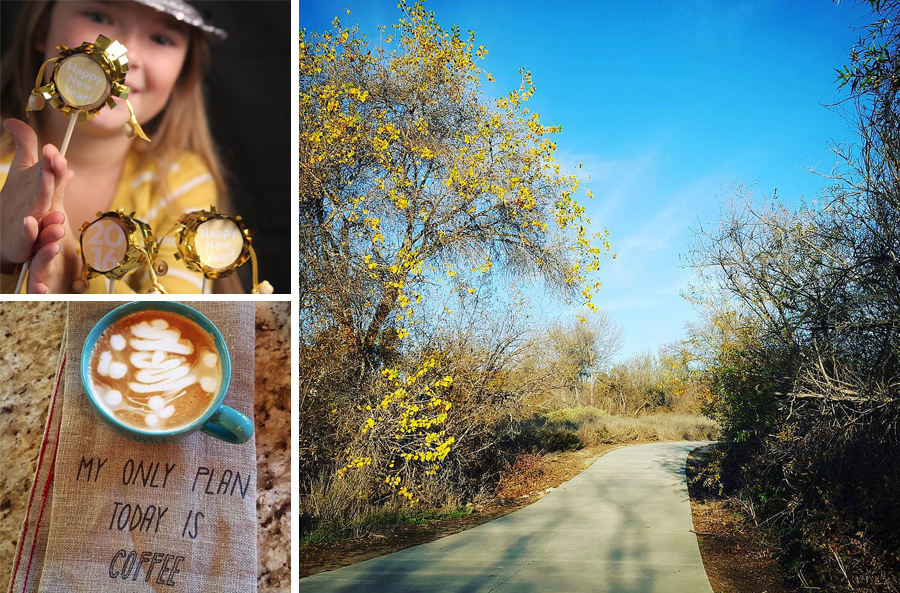 23. Happy New Year rattle drums! These were way more complicated than they should have been but they are cute and they make soft little cute rattle sounds.

25. I’ll just leave you with a picture of the nature park by our house. Ah, winter in Southern California. You can be so pretty sometimes.

6 Comments → End of the Year Wrap-Up