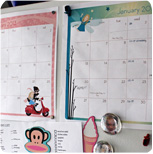 Sheesh. It took me long enough. I’m sorry about that. I’m sure most of you have moved on to other more timely calendars but if anybody still wants one they are in my shop! 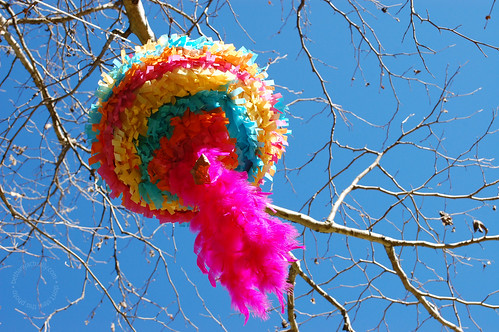 Bug’s cat-themed party went off without a hitch (well, there was one huge hitch but I’ll get to that later). I know so many of you are rolling your eyes at me. Of course it did, Brenda. You’ve been doing these crazy parties for over fifteen years now. You might have the hang of this thing.

Well, yeah. But you know, having nerves over these things is PART OF MY PROCESS!! Sigh.

Before I write about the fabulous, super-fun, crazy-over-the-top, cat-themed, park party I thought I would get this piñata post out of the way. First things first and all… And yes, the piñata turned out wonderfully. You should all rush out and make one. In fact, my new vow is to stop having parties all together and just make piñatas full time. I’ll just live on the beach and make piñatas. 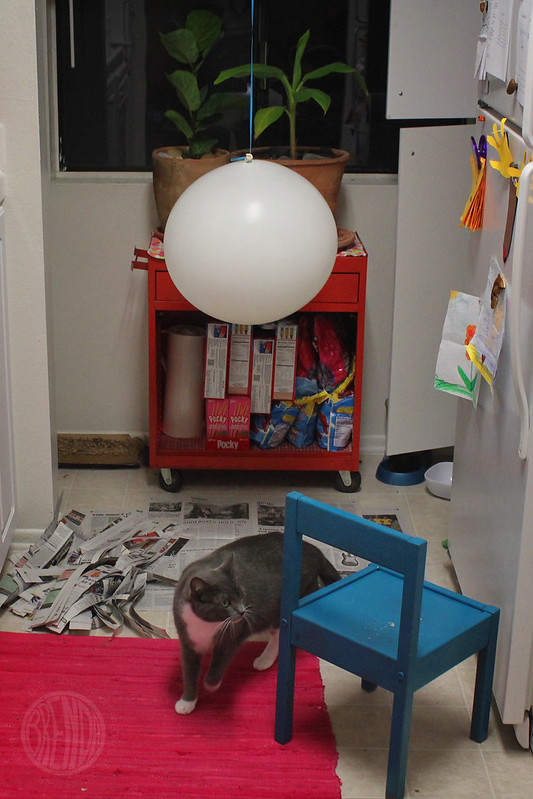 The first step is to get one of these really big balloons. You can order them online but then you have to blow them up and I personally don’t have the lung capacity for that much blowing. I’d probably pass out. You can take it to a party store and have them blow it up (and you might as well buy it there too) or maybe you own your own helium tank or shop vac or something that will do the trick. Whatever you do, you just need a big big balloon.

Next, prepare your area for working. It will get messy so don’t plan on doing this over your living room rug. I recommend the kitchen or the bathtub or maybe your garage. Just make sure it’s an area that you can easily mop up because flour and water paste can be a witch to clean up. 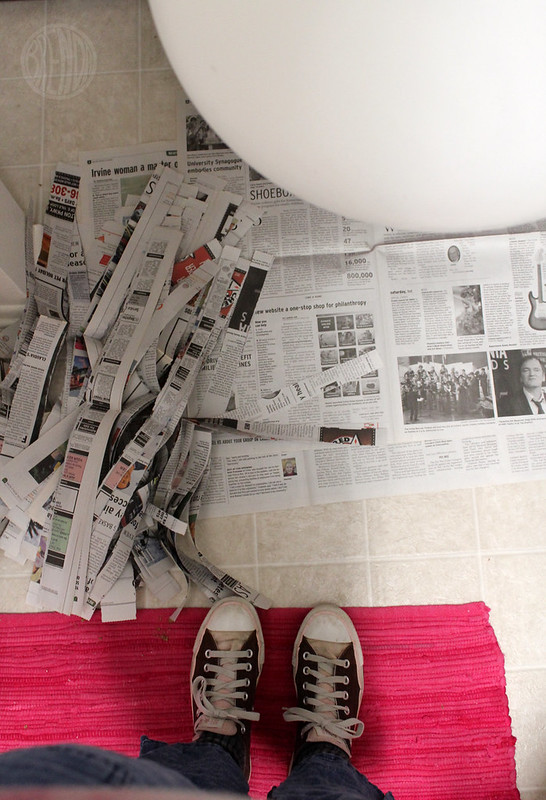 Then prepare your newspaper strips (1-2 inches wide is good) and cover your area with newspaper. 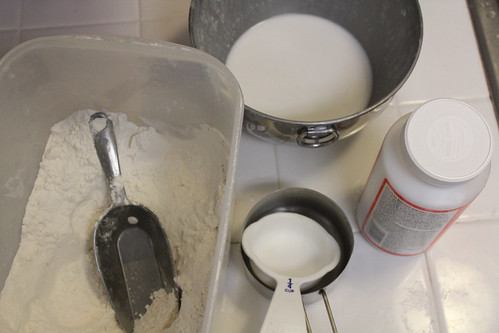 Next, make your paste. There are a bunch of different recipes out there but I basically added 1/3-1/2 cup of flour to 1 cup of water (you want it to be the consistency of pancake batter). Then I added a tablespoon of Mod Podge, for good measure. All the recipes called for liquid starch or white glue but I figured Mod Podge was basically the same thing. And it was, it worked great. 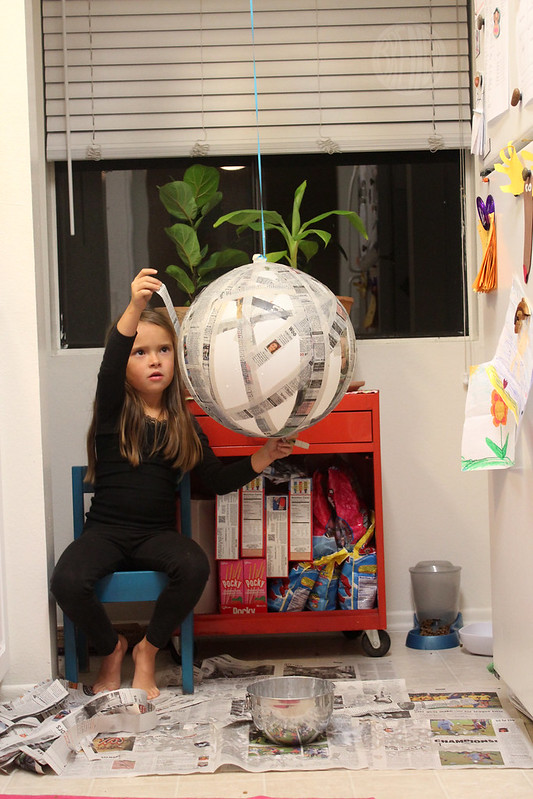 Then you add your strips. I kind of criss-crossed them as I went from top to bottom. I wasn’t super organized about it. I was mostly just worried about covering up all the balloon’s surface and then making sure to smooth the edges around the ball. The bottom did get a little heavier and soggier than the rest of the ball but it dried in the end and didn’t make that much difference in the overall shape. Now Bug kicking the ball when it was dry, that did make a difference. I do not recommend kicking your piñata. 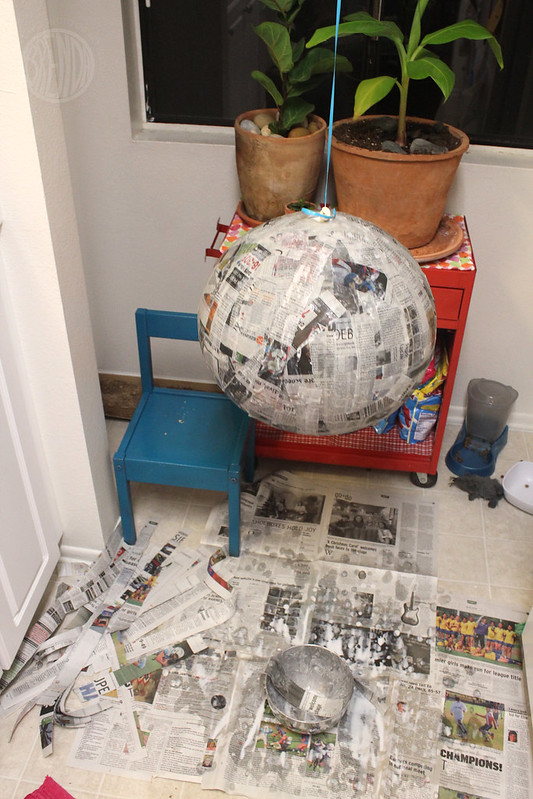 When it is covered let it dry overnight, or longer if needed. 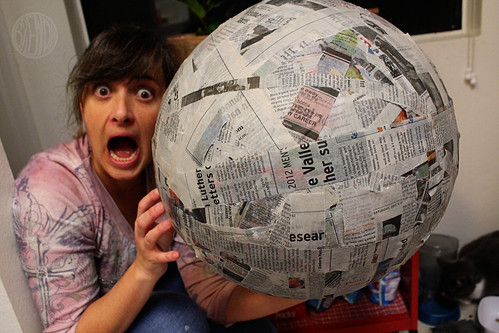 You will be so proud of your newspaper orb. It will be like a new pet living in your house and you will find yourself caressing it like Gollum’s ring. Or maybe that’s just me in my ninth stage of pre-party craziness. Probably just me. 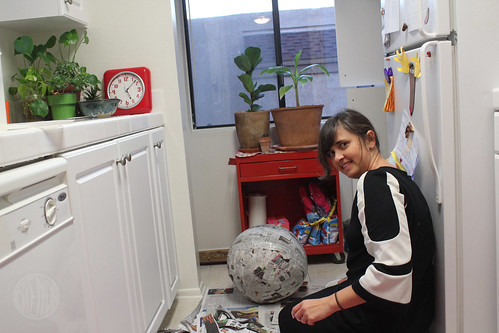 The next day I added another coat of newspaper because I was worried it wouldn’t be strong enough. Some people recommend doing 4-5 layers but I was lazy and only did two. Two turned out to be perfect. The kids all got a chance to whack it twice before it broke. But I did reinforce it with duck tape so that might be a factor. More on that later. 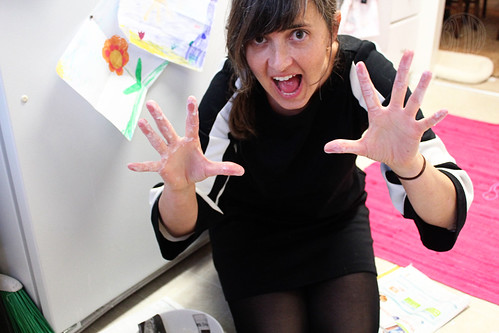 So anyway, about the mess. You can totally do this project in your Sunday-go-to-church clothes. It’s messy but if you wipe things up quickly you’re fine. Flour and water wash out. I even wore heels. 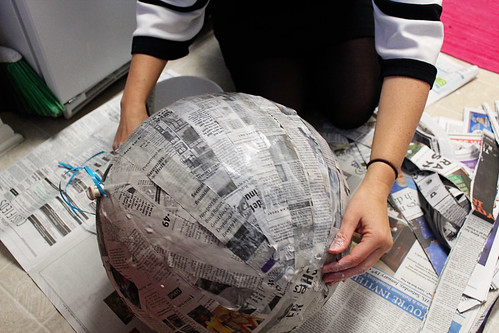 My point is, don’t be afraid of the piñata paste. It will not kill you. 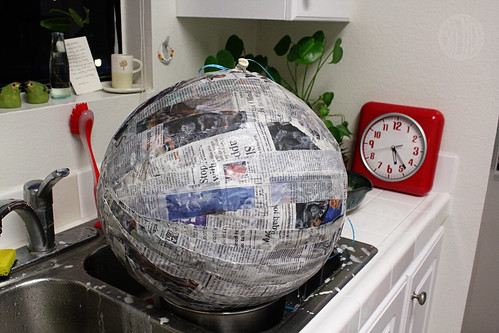 I did migrate the mess to the kitchen sink at that point though because I wanted to flip the balloon over and apply strips so that the top would be the bottom and the bottom wouldn’t be too heavy. That worked fine too. It was actually a lot easier not having the balloon spin around on it’s string. But I still think the string method is best for the first step because you need access to all sides without it touching anything if you are going to cover it well. And, it dries better that way. You’ll figure it out. 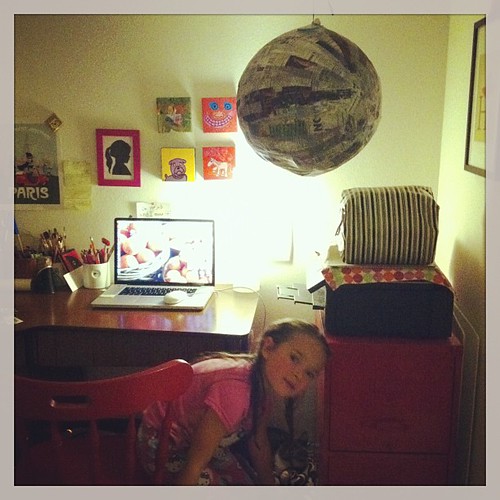 For that second coat I moved the piñata into the bedroom and hung it over the little space heater I have in there. That did the trick and it dried quickly. 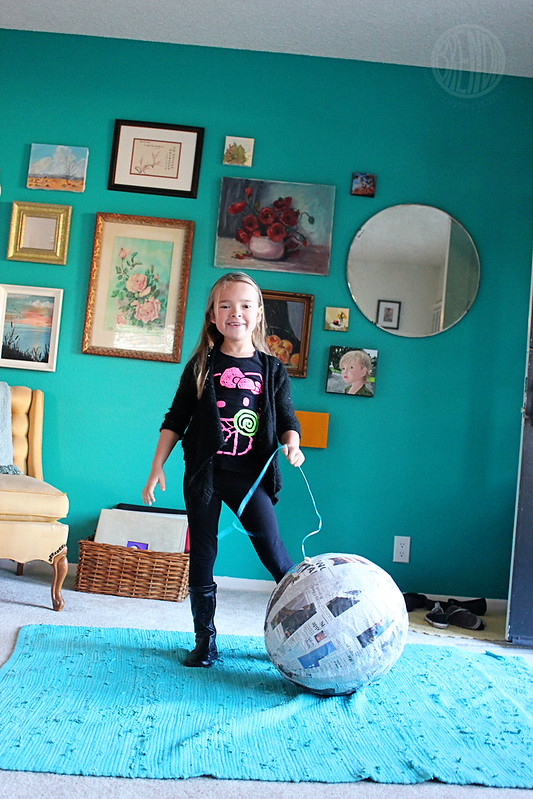 The next day it was as hard as a soccer ball and very tempting to kick. 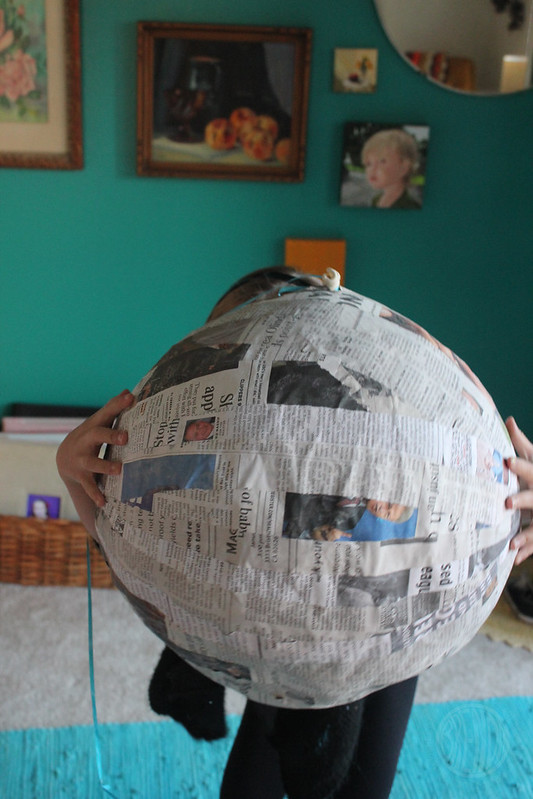 We may have played with it a little bit too much. But it was so fun! 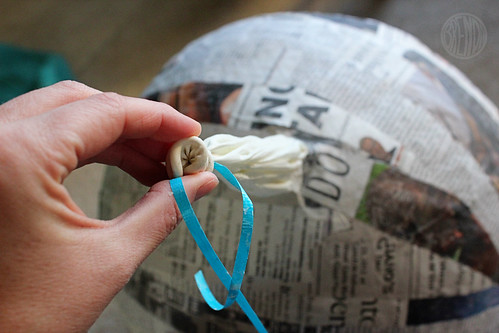 Later, after Bug safely away in school, I popped the balloon and listened to it crackle as it detached itself from the dried newspaper walls. It was the coolest thing. I kept expecting it to suck into itself but it didn’t. The newspaper walls stood firm. It was like magic. Now I had this giant hollow newspaper orb. 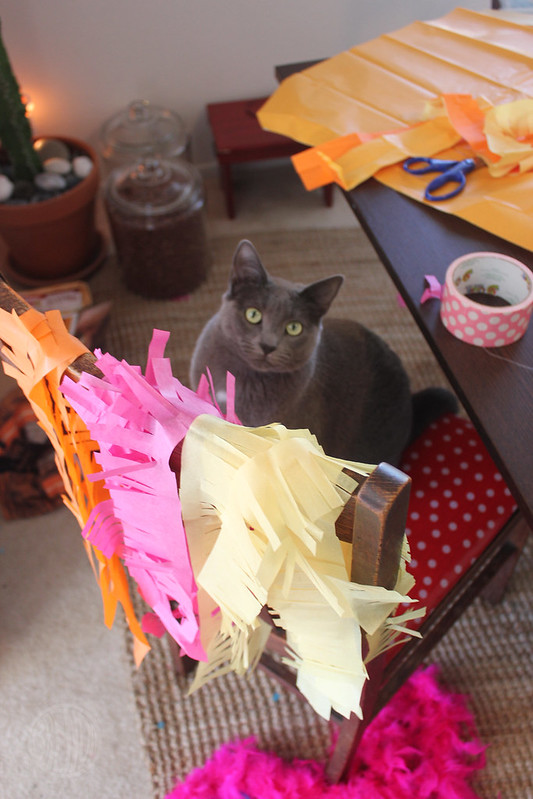 Time to decorate it! I don’t know about you but I have a giant stash of tissue left over from many other craft projects. I was really happy I could dig out my stash and use it up on this piñata. I cut several long 1-2 inch strips and then fringed the edges like so. 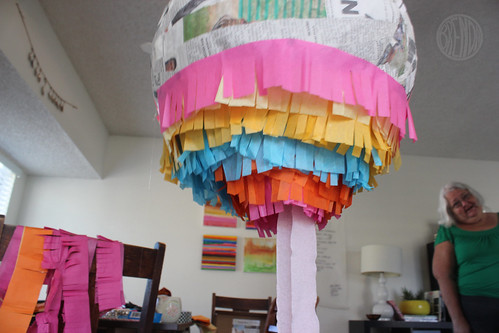 Then I dabbed on dots of hot glue from my trusty glue gun and wrapped the strips around the piñata overlapping by a half inch. I love how the tissue covers a multitude of evils—like a slight dent from being kicked like a soccer ball for example.

You can’t see it in these photos but I hung the ball from a stripe of duck tape. I took one long piece of duck tape and wrapped it around the axis and then stuck the ends together at the top to create a tab. I punched a hole through the tab and then strung my rope through that. The duck tape acted as reinforcement and worked really well to hang the ball from because when you add a heap of candy to this giant thing, it can get heavy! 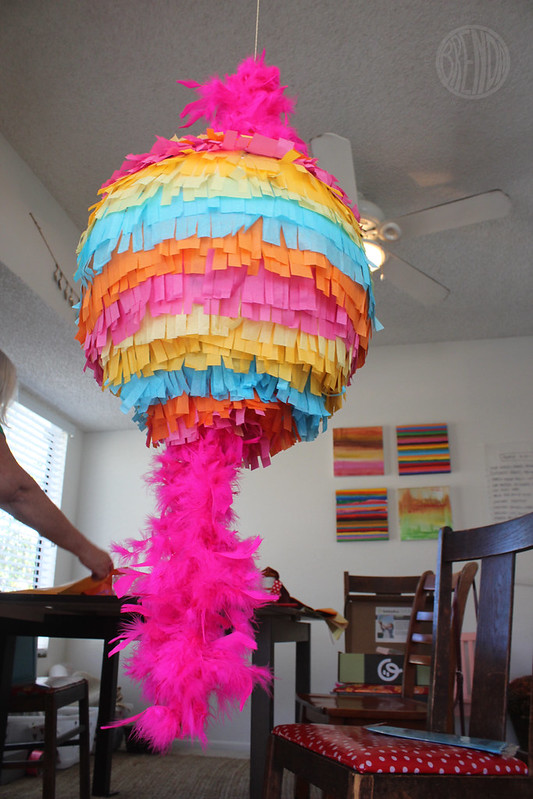 Once I had covered the whole thing with tissue I cut a bright pink feather boa in half and glued half of it to the top of the piñata and the other half to the bottom. The top feathers were mostly to cover the duck tape. I wanted the feathers to be bigger so the piñata looked like a giant cat toy but the boa was the best I could come up with. It was festive anyway. 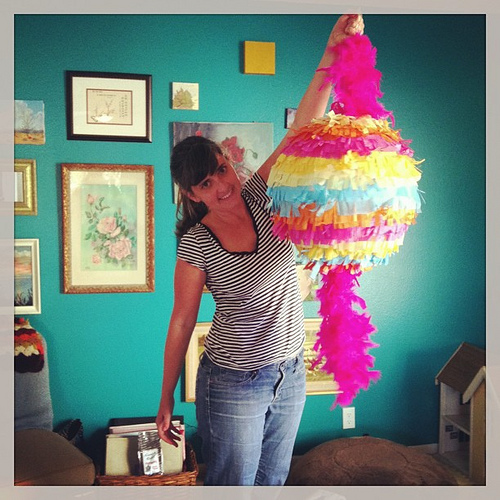 And that was that! We were ready to party!