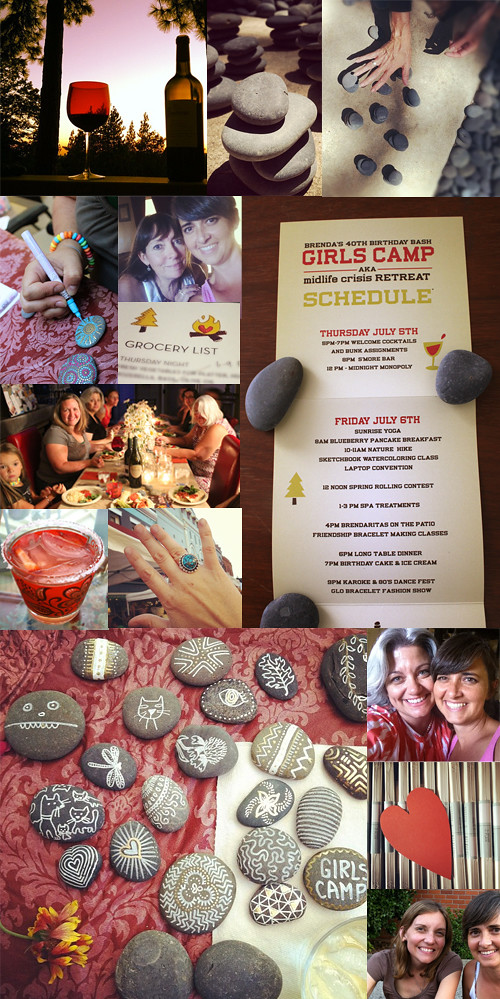 Forty is funny year to celebrate. You’ve come so far. You’ve left so much behind. Values and priorities are shifting into place but yet there is still so much to look forward to…it’s a strange but wonderful pinpoint on this journey we call life. Not quite old. Not quite young. I can’t think of a better way to celebrate it than a great big birthday bash with all your closest friends.

I have so much to be thankful for. This “midlife crisis retreat” was everything I wanted it to be and more. It’s going to be hard to put down in words what I want to say about it but I’m going to try. I wanted to go through my pictures chronologically but my brain is a jumble of beautiful memories. So a collage just seemed to capture it all better.

First of all I want to say thank you to my dear friend and fairy godmother, Susan. I called her up way back in February trying to get this camp idea off the ground. I was just about to give up because the expense seemed insurmountable especially since it was getting more and more clear that I needed to move this summer. I had visions of a retreat in Palm Springs or Joshua Tree but who wants to lounge by the pool when it’s 120 degrees outside? Not me. I couldn’t have a party at home. That was too complicated. I didn’t know what to do. I really just wanted to cross it off my big fat goal list and forget about it.

But Susan wouldn’t let me. She knew this was important to me and I’d been talking about it for years. She solved all my problems in one swoop with an offer to have the party at her house. This was a fantastic idea because Susan always has the BEST house (I’ve been to many over the years) and she’s known far and wide for her hospitality. But it was a little strange for me because you know how much of a micro-manager I can be when it comes to theme parties. Could I pull off what I wanted to pull off at a destination I’d never even been to?

Susan sent over a passel of photos of her home and gardens and I got to thinking up a theme. I wanted to incorporate Susan’s love of all things exotic and Asian but it just wasn’t working with this deep need I had for something nostalgic from my childhood. I struggled with the idea for weeks trying to blend something between smooth zen rocks and relaxing spa treatments with girl scouts camping by a steam, maybe some s’mores and any kind of 70’s-80’s kitsch I could squeeze in. Finally, I just gave up on the Asian fusion idea and plowed on through with my “midlife crisis retreat” idea.

You may wonder where I came up with the idea for a midlife crisis retreat and really it was because I was imagining a conversation about travel arrangements with Toby. I knew he would give me trouble about taking Bug away for a week and screwing up his vacation plans. (He loves to travel to Northern California every Fourth of July for a lakeside vacation.) I could just hear him saying he wasn’t going to rearrange his schedule with Bug just because I wanted to go hide out in the woods and have some kind of midlife-crisis retreat with my girlfriends. And then it hit me. Why not embrace what could be made fun of? It is what it is. Why does that have to be a bad thing?

Not that any of us are going through midlife crisis but it is that point in our lives where we look back on how far we’ve come, we think about all the struggles that have made us who we are and we either sit back and admire the beauty of how everything works out or we make some big changes to fix things. I’ve certainly been through a lot these last two years and I knew my best girlfriends had too. It would be so great to get together and share our experiences and ripe old wisdom (ha ha).

So Susan’s it was. It was perfect.

I also need to thank Susan’s fiancé, John. What an amazing guy. He is Susan’s rock and fortress. He is calm and quiet and just when I thought we were driving him crazy with our constant chicken-clucking banter, he would come out and say something about how wonderful it was to be surrounded by so much life. He was so patient and gracious with us. 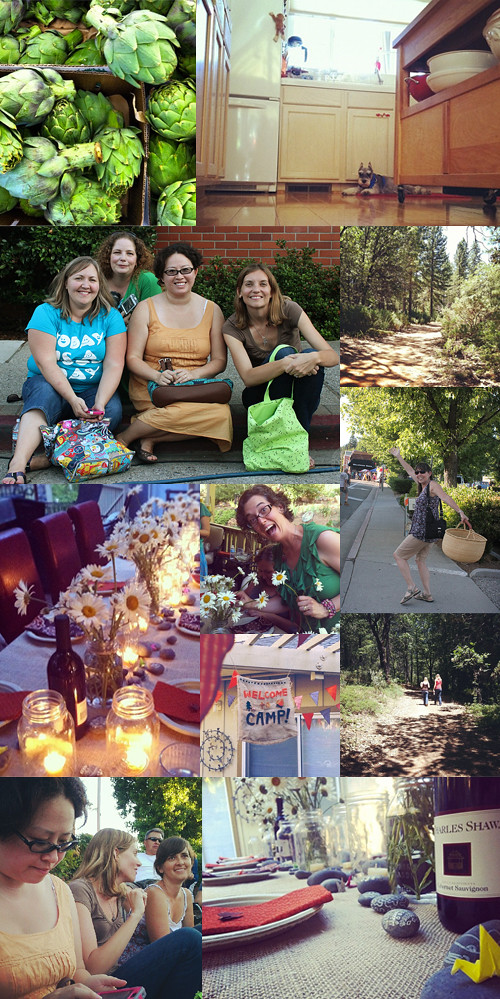 This party fell on Susan and John during a particularly trying time. Susan’s father had been in the hospital with cancer. He was just in the middle of transferring back to a home with all the many many phone calls to medical officials that takes. You know how that can go when you are taking care of a loved one via phone calls long distance. It was also the anniversary of John’s wife’s death AND as if things couldn’t get any worse, their dog (the beloved Buster) was very sick and passed away after fourteen years of incredible loyalty. It was just hard all around but you wouldn’t know it. We knew they were grieving but they were celebrating life at the same time. Life is such a messy bundle like that.

I am so very thankful to John and Susan for their unending over-flowing hospitality in the midst of such a tumultuous time. It really was a thing of beauty. A friendship to be treasured. 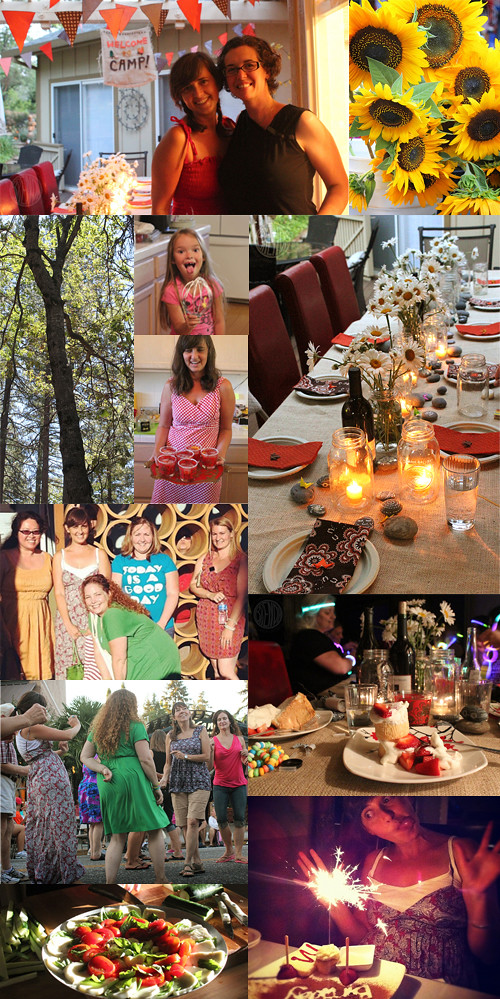 And speaking of friendships to be treasured, I am just so in love with this bunch of weirdos who came all this way to celebrate with me in the woods. Back in high school I couldn’t get my friends to like each other. Now I can’t get my friends to stop liking each other. In fact, they don’t even need me! That sounds funny but it’s actually a really really cool thing about middle age and maturity.

I loved that I could walk in and out of a room and participate in a conversation or not. I didn’t have to play moderator. Many of these friends had never even met each other in real life but you wouldn’t know it. It was like being at a little mini blogging convention with the din discussion going on at all times. Of course food and wine helped but overall it was just an amazing harmonic experience.

We didn’t exactly follow the schedule I had so flippantly thrown together on the invitation. It was more of an *idea* of what could be fun to do if we felt so inclined. Or I could say it was a clever marketing ploy to get my gaggle of friends interested. I knew nobody could pass up karaoke and an 80’s glow bracelet fashion show or midnight monopoly and sunrise yoga. But we did pass it up. We nearly passed up the s’more bar too but that is only because we spent so much time talking our heads off that we ran out of time for all the other things. We followed it roughly but added some other things like a visit to the local farmers market and dancing in the street to a live band! Music so good that it has you dancing in the street in the sunlight! That is my idea of a happy time. 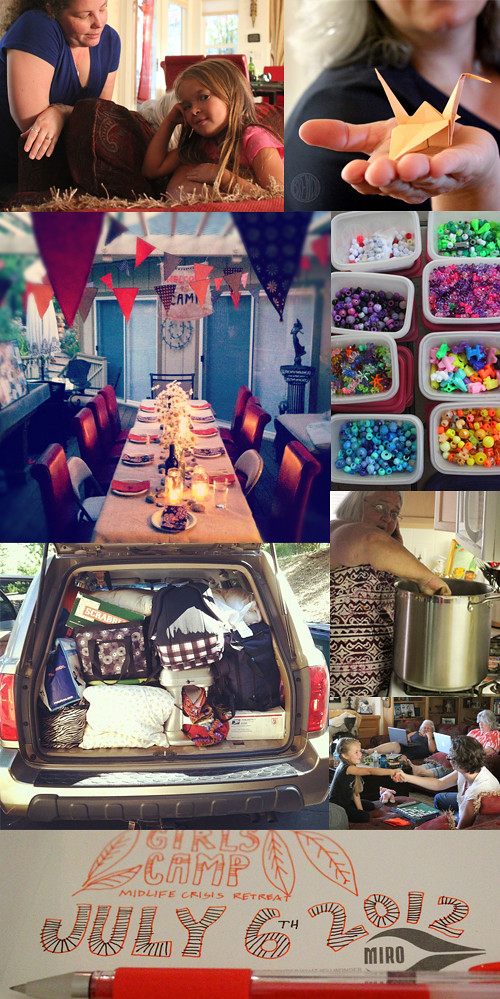 There are so many highlights to talk about! The long table dinner, that was a dream of mine since forever. My mom made her famous spaghetti. The spring rolling contest, that was a blast. We made wine charms for our coffee cups and painted rocks. I love painting rocks! There were some brief hikes and a few campers actually made it to a yoga class.

And of course I can’t forget the spa treatments. If anyone is in the Grass Valley area, you HAVE to visit Vela and ask for Reneé. I have never had a better massage in my life. Yes, I’ve only had maybe ten massages in my whole life but it was an out of this world experience. I actually started contemplating if I could afford to fly up every few months just to get one. Of course visiting Susan would be part of that plan but still. It was that amazing. 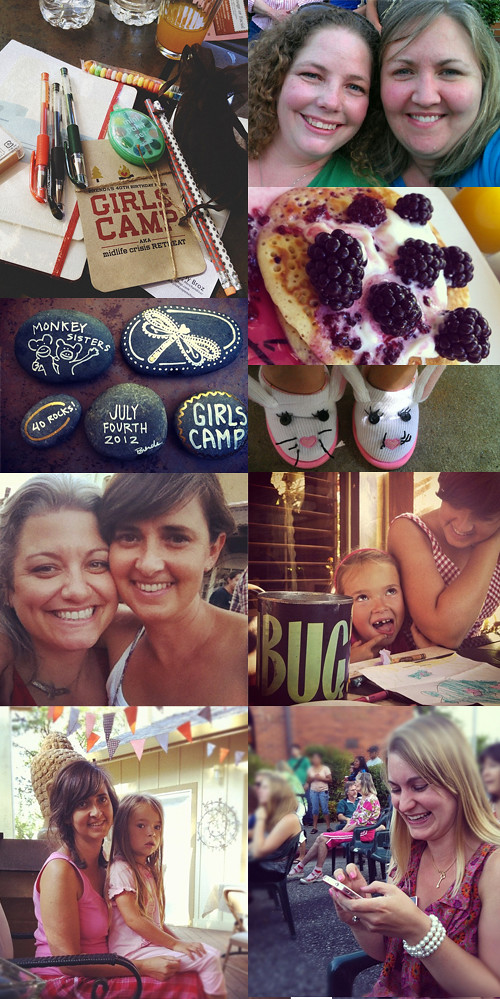 Basically we spent a lot of time just sitting around enjoying the surroundings and each other. It was really fun. There’s even talk of a reunion…who knows, maybe for my 50th! 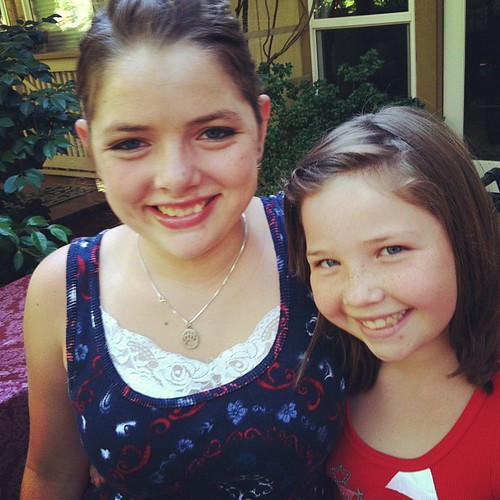 My mom brought my nieces up to our “camp” for the fourth. It was so good to see them and my brother and sister-in-law. Kinda made me miss Bug more but still so wonderful to have family around. 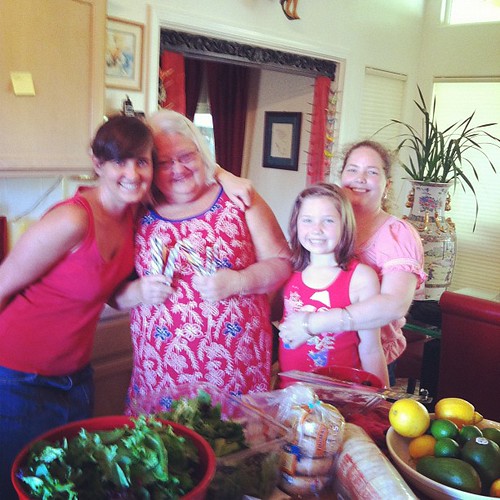 Please forgive the blurry phone photo. My real camera is having some focusing issues (I’m going to have to send it in I’m afraid) so I’ve been opting to use the phone and it’s not really doing anybody any favors. 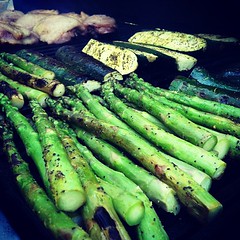 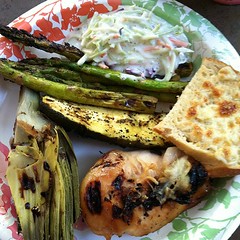 Susan made us amazing food. I might have to tie her to her bed to make her stop working so hard. 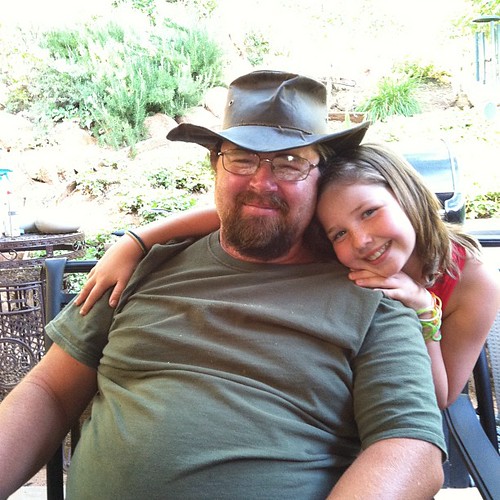 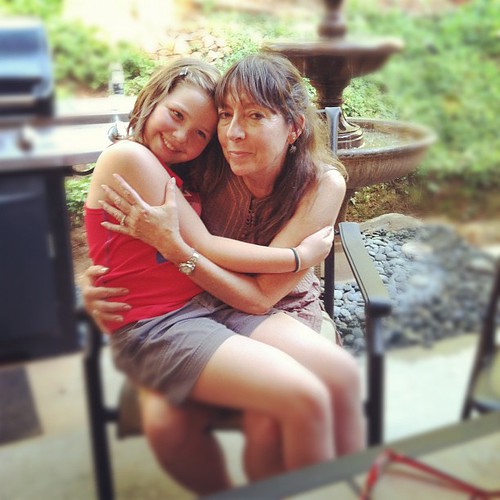 The two Susans. Well one of them is spelled with a z but you get the idea. 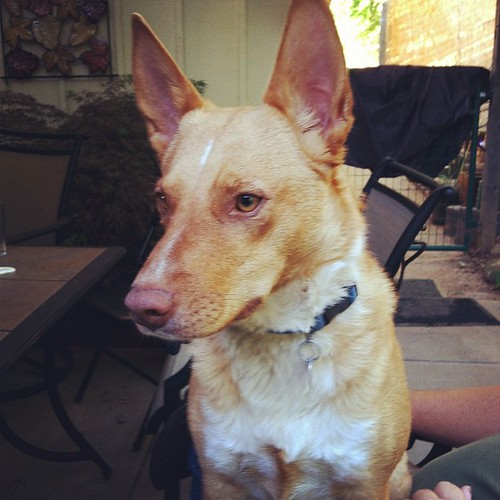 Who invited the dog? Not me! But she won us over quickly with her sweetness. 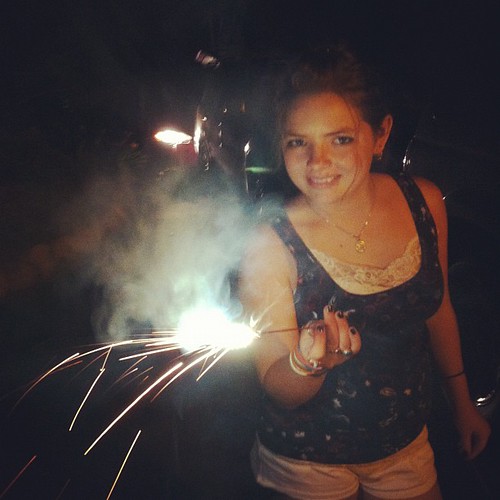 And fireworks! Who said Rapunzel could grow up to be so beautiful? Dang it! 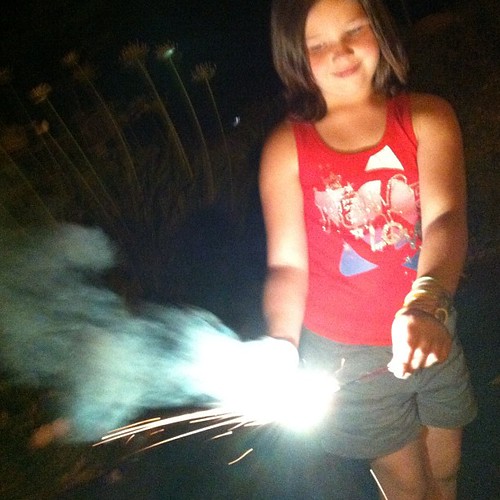 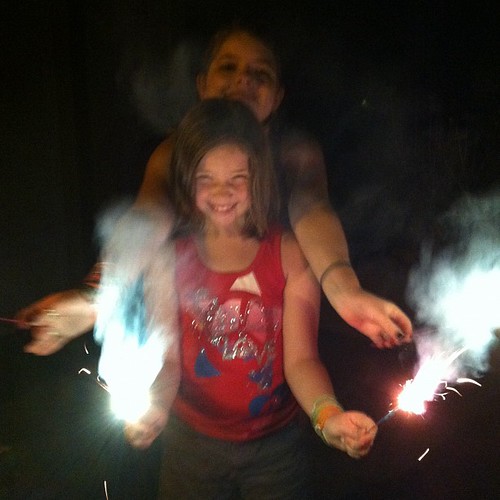 They make me wish I had a sister. 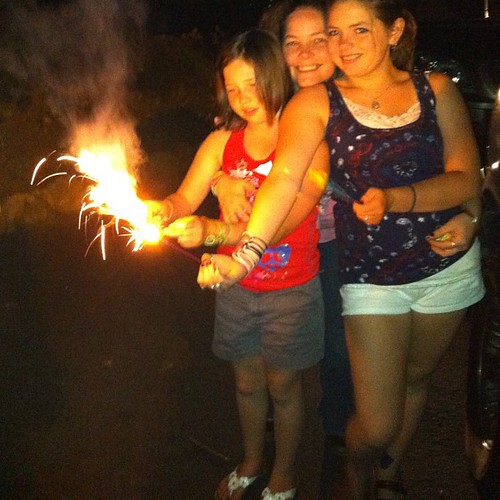 Good thing I have a lot of sisterly friends and a few super duper sisters-in-law!