Wooly eyeballs and monster teeth! So many wooly creatures! I want some of these woolbuddies for me! Spied via CRAFT. 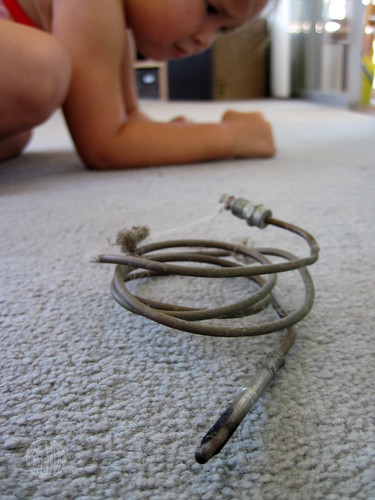 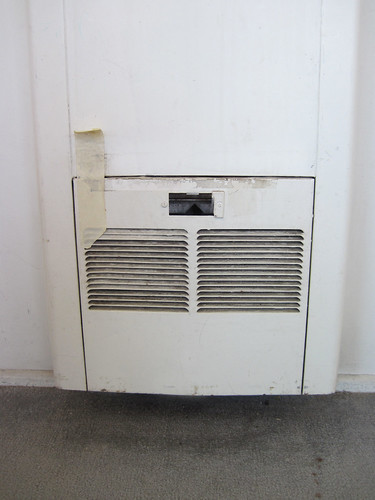 We have a mystery in our house. Our wall heater is very old and the clasp that holds the little trap door to the pilot light at the bottom is broken. As a stop-gap fix we have taped it shut with a piece of masking tape. This works pretty well for about a month and then it mysteriously falls open with a loud boom as the metal door hits the carpet. We’re used to it but it still startles us.

The heater rarely works so we hardly use it. The pilot light refuses to stay lit. We aren’t using it right now of course since it’s almost warm enough to leave the windows open even at night. So the startling boom sound happens very rarely since the trap door is shut tight and not opened all summer. (In the winter it happens all the time since the tape is stuck and unstuck every time we have to re-light the pilot light.)

Last night I heard the boom sound. I thought it strange but I was sleepy so I didn’t bother getting up to investigate. Then this morning I woke up to find the wiring mechanism to the heater laying outside of the trap door. The trap door was shut and a small coiled piece of wire with a burnt end was just sitting there on the carpet. I figured Toby had gotten up in the night and taken the wire out and left it on the floor. Maybe to remind himself to fix it the next morning.

This morning after my usual morning chores I finally asked Toby about it. What wire he asks. He didn’t touch the heater last night. He recognized the wire. Its an old mechanism from years back that a repair man had just stashed in the wall when he replaced it with a new one.

How could the coiled wire be outside of the heater and the door shut? Do we have a ghost? Did one of the cats stick their paw up underneath the heater trying to catch a mouse or a silverfish or something, snag the wire and pull it out? If so, then what was the loud bang? Cats surely cannot open and shut the trap door. 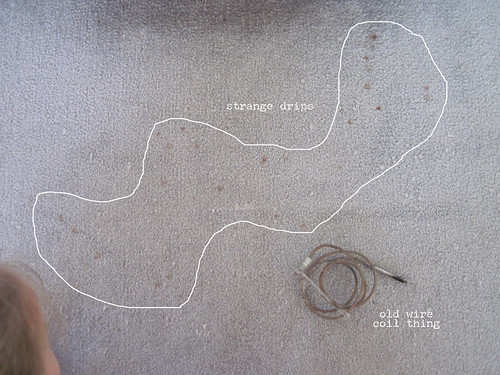 Also there are dried drip marks around the heater in an arc like pattern…something splattered when the trap door fell. They are faint orange, reddish maybe brown… Could it be blood? Did our landlord come in the night and mess with it? They are weird like that but Toby swears our front door was locked. I’ve inspected our cats and there are no signs of any scratches or bites. It’s possible the drips could be old from something else (our carpet is a million years old) but I don’t remember them at all. 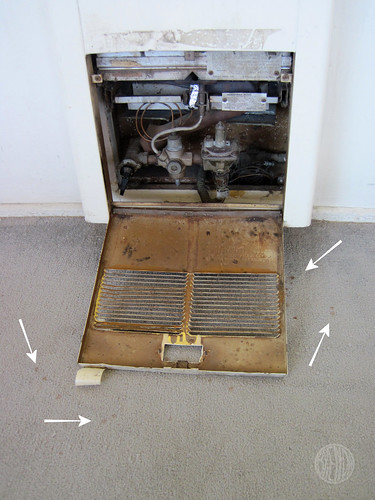 It’s a complete mystery. I think we have a ghost.