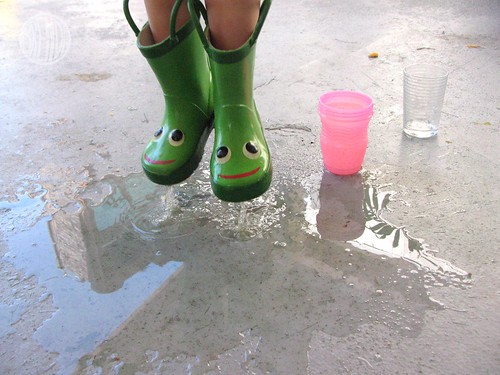 I have to come clean about something and I really hate to do it. Not because I’m afraid of you readers judging me but because I’m afraid it will make waves in my family and I really don’t want to cause anyone to hurt any more. I’ve put the subject off for more than a year. There has sort of been a “don’t ask, don’t tell” policy amongst my relatives and that seemed to be going along great but it never felt that great to me. I’ve never been one to lead a dual lifestyle so let the sun shine on my path so all can see…and judge, if they will.

You see, I’ve been going to a Lutheran church for about a year now. Not every Sunday but probably at least two Sundays a month, sometimes less, sometimes more. I’ve been going just long enough that I’m getting familiar with people and they miss me when I’m not there. It’s starting to feel like home. 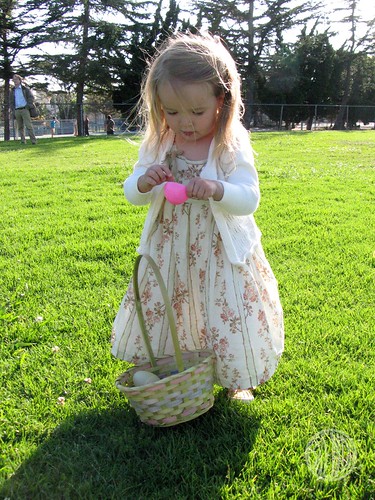 It’s funny that I chose to go to a Lutheran church as it is very very different from the way I was raised. How can I explain the differences without writing a novel? I think the easiest way is to imagine comparing Quakers to the Catholic church. An ocean of difference…yet still just Christians.

I chose to go to a Lutheran church out of respect for the way Toby was raised. Toby doesn’t go to church anymore but he has a lot of sentimental feelings about where his little girl goes and I understand that. I feel that way too. So Bug and I go to both places. I take her to meeting (where I was raised) when I’m visiting my mom and I take her to the Lutheran church when I am home. 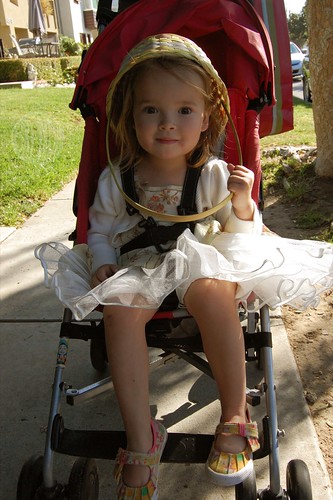 It really is true that the best way to convert someone is by example. Nobody ever tried to convert me to Lutheranism (and I’d hardly say I’m converted…yet). I just looked at the people in my life who seemed to have peace with their spirituality and started asking questions. Toby’s stepmom is Lutheran. Also, Bethany is Lutheran. I never really made a decision to go one way or another but I just keep ending up here and it seems like God has something to do with it. (That’s a loaded sentence. I could write a whole post about that but I need to keep this from getting too long.)

I do need to make it clear that I’m not breaking bread (taking communion) at either place. I don’t even know how to really explain that without boring everyone to death. I think the deciding factor for me is that the meeting is more exclusive about who they break bread with and they would have me choose one over the other. So I choose neither. Which is sad but that’s where I’m at. 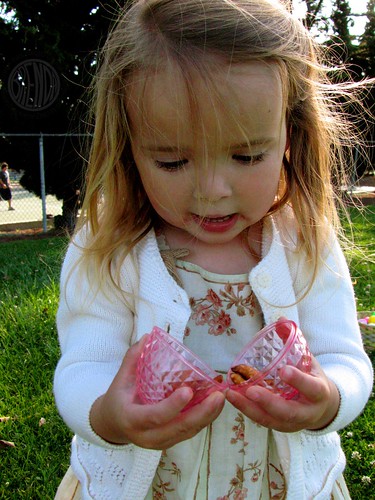 When I first started going to the Lutheran church it felt completely wrong and backwards. I cried my way through services because it just didn’t feel right. I didn’t feel comfortable going where I was raised either and yet I felt like a lost stranger going to this new church where they chant and read their prayers off a paper with their eyes open. With their eyes open! It was so weird. So…so Catholic! Which is not a bad thing per se but when you’ve been raised as Protestant as they come, it can seem all sorts of wrong. It felt too formal and distant from the way I learned to pray to Jesus, as if he were my friend sitting right next to me.

But Jesus was still sitting right next to me. He never left me. 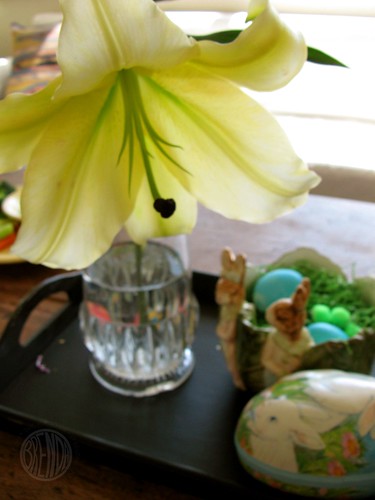 So I talked about my awkwardness with the Lutheran style—of chanting and standing and sitting and drinking out of golden cups and wearing different colors on certain days etc etc—to Toby and Bethany and I’m starting to understand it. I understand the madness behind their methods anyway. I may not ever feel like this is where I belong but the truths are still the same truths. Lutherans just like more structure. And after living through a particularly bloody division of people in the meeting, I can appreciate a little structure.

What I’m really trying to get at with this post is that I’m starting to feel loved at this new church. The people there are so quirky. I love Lutherans with their stuffiness on one hand and their open-minded acceptance on the other. Like the joke goes, Lutherans are the only ones who sing “Stand up, stand up for Jesus!” while they are sitting down.

They’re very good at making fun of themselves too and I like that. They’re a little bit legal but a lot bit accepting. They never make me feel bad for what I’m doing or not doing but the pastor can pound home a sermon that makes me cringe in guilt. He’s not shy about the touchy subjects and I appreciate that. 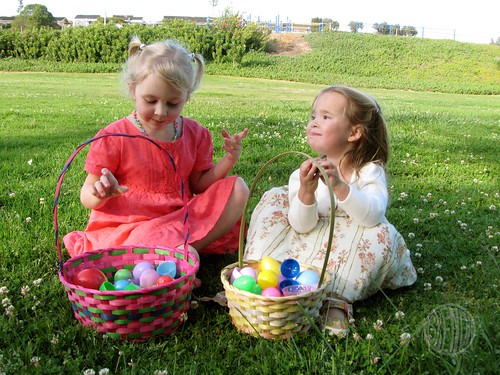 This last Sunday was Easter Sunday which is a really big deal in the calendar for many Christians. The meeting celebrates Christ being risen from the dead every Sunday so it’s never really been about a particular day in Spring for me. I’ve never been to an Easter Sunday service before so this Sunday was a bit interesting to say the least.

I’m so glad I went to the Good Friday service on the Friday before though. Celebrating Easter isn’t all about rejoicing and pretty flowers, though it is about that too. It’s also about Jesus being crucified and the pain and suffering He went through on the cross leading up to his resurrection. Jesus was a real person. The crosses were wood and they stuck big giant nails in His wrists and feet. When the pain got too bad from hanging from His wrists, He would have to stand up on His legs pushing against the nails that held his feet. The pain was real. And yet that pain was nothing compared to the punishment that God rained down on him to cover all of our transgressions so that we could be free and join Him someday in Heaven. The Good Friday service was about that. It started in candlelight and ended in darkness that seemed fitting for the solemn remembrance.

It was strange to leave the building in silence and not stop for coffee and cookies in the kitchen afterwards. That’s what we usually do. Bug was completely mystified by it because usually the socializing part of church is her favorite part. But I’m glad she’s being exposed to this. I want this to be normal for her someday. It may not ever feel completely normal to me but it will to her. That’s why I keep going.

On Sunday it was fun to see the church decorated in lilies and listen to the choir sing special songs that they’d been working on for weeks. The choir is a small smattering of members. They don’t give you the chills when they sing like the fancy church across town but I like them. They really try.

The pastor tried to get the congregation excited about the singing. He told us we could sing loud and clap and even make animal noises if we wanted to. Anything was good as long as it was a joyful noise, he said. But when the choir did their best to really get into a fast-paced song, all the congregation managed to do was stand and sway from front to back. They didn’t even clap when it said to clap in the lyrics. I found it hilarious.

But you know what? I felt at home in their awkward swaying. Maybe they didn’t really get into the music like some churches do with loud amens and hallelujahs and that’s okay. I think it’s a cultural difference. Some people really like to feel their music, others are more quiet. They were there because they wanted to be there. And I was happy to be there too. I may have shed a tear or two. 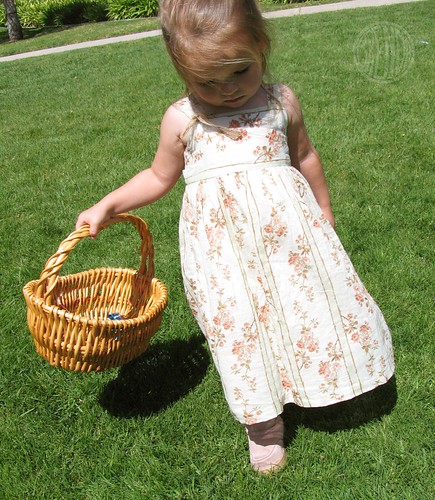 I was especially happy to be in church on this Sunday because I really needed a place to be and just pray. Bug was entertained by the singing and pretty music and I could close my eyes and pray. Watching my fellow mommy-bloggers mourn over the loss of Maddie and Thalon this last weekend has been gut-wrenching. Babies die every day, I know. But these babies belonged to mothers who wrote about them on the internet. It could have been me. It could have been Bug! I’ve never identified with a mother losing her baby as much as I did this weekend. Maybe I’ve been off in my own lala-land ignoring the harsh realities of life. Maybe I needed a wake-up call. Life is so short.

So that is part of why I’m coming clean here today. I wanted to talk about the silly fluffy parts of Easter where we had a nice dinner and an egg hunt and how cute Bug’s dress was…but I felt bad glossing over the more meaningful parts of this Easter. This Easter was hard on so many people. Personally, I found a lot of comfort going to church with the motley bunch of Lutherans I’ve recently begun to love. I hope and pray that all the other mothers out there have people to take them in like I’ve been taken in. 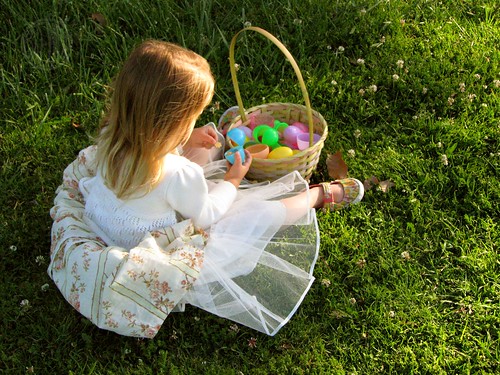 I’m floundering around like everyone else. I’m probably making a million mistakes. But it isn’t about me. No matter what way I go, thinking I’m doing the right thing, I’m sure I’m not. I’m just starting to realize that no matter where I am, Jesus will still be there. Sometimes it’s almost funny. He probably laughs at me.

If you want to comment, please be kind. I don’t usually moderate comments but I will on this post to protect my family.

We had fun. The end.

I’ll write about the stories later, like tomorrow after I’ve had a great big cup of coffee.