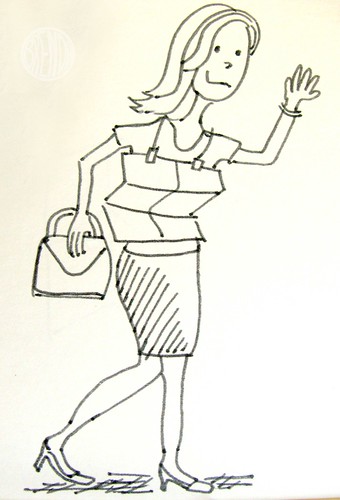 This post is from professional author, Shauna Glenn. Thank you, Shauna!

about 3 weeks ago i got a popcorn kernel stuck in my tooth. i picked and flossed and picked some more until i was sure it was out. after a day or two, my gums swelled and my tooth hurt. fast forward to now, and i’m still reeling from the pain.

so yesterday i went to the dentist. you may not know this about me, but i’d rather poke myself in the eye with a hot fork than go sit in a dentist’s chair and have him come at me with sharp objects for purposes of scraping old food bits out of my teeth. my back teeth are especially sensitive (much like my personality) and i find that i spend most of my time clenching, gripping, grimacing, and convulsing. and that’s just in the waiting room.

i meant to get a zanax from a family member before i went yesterday, but because i didn’t put it on my calendar, forgot about it until i was driving to the dentist’s office. too late. i was going to have to go sober.

i was called back to the dreaded chair where the assistant proceeded to fasten me in and drape me in the nice blue paper bib. ok, i wasn’t ‘fastened’ in the chair, but maybe i should’ve been.

she asks me what my problem was and i began telling her, “i don’t know, i just seem to piss people off easily. i’m way too big for my britches and i tend to speak without filtering what comes into my head. oh, and i’m an incredible smart aleck–i blame my dad–but mostly, i just want to be loved.”

the assistant has a totally confused and somewhat frightened look on her face and says, “um, i meant with your tooth.”

embarrassed, but not really (point proven about the non-filtering thing above), i explained about the whole ‘popcorn kernel’ incident. she told me to open my mouth and then i swear she gasped.

a few seconds later, the dentist appeared and panic set in with me. he had that look in his eye. the one that said, “i am SO gonna poke you in the mouth with very sharp objects and i am going to LIKE IT!”

he put on blue rubber gloves and sat down next to me. “open your mouth,” he instructed, and reluctantly i did. over the next few minutes he made a lot of “uh-huh” sounds and rattled off gibberish that i assumed was dentist speak for ‘what the hell happened in here?’ she scribbled notes in my chart and i felt sure they were judging me.

and all of this was before the dentist even put anything in my mouth. i had warned him as he approached the chair that i am highly sensitive to anything related to dental equipment. so he heeded my warning and promised me he would just “take a peek.”

after assessing the infected area, he thought it best to numb the area so i wouldn’t feel him digging around in there. he was worried there was still food stuck in between two of my teeth. i told him if he found any to save it. there was no sense in wasting perfectly good food. i don’t think he appreciated my sense of humor because the next thing i knew, he was coming at me with a needle.

as he was jabbing me in the gum with novacaine he asked, “so, how’s your summer?”

point to ponder: why do dentist’s ask you questions when they have both their fists and a couple of metal tools in your mouth? i’ve never quiet understood the logic behind that.

so i answered, “ahhaa haa ahaaha.”

and then he said, “all right. let’s wait for that area to get numb and then we’ll take a good look.” he and the assistant left the room and i sat there, waiting for 1/2 of my face to fall asleep. after a few minutes they returned and the dentist sat down again and asked me to open my mouth. it wasn’t so easy this time. i had no control over the left side of my face. i was like a stroke victim. it was weird.

but the good news was i didn’t feel a thing. at one point i think he even released a hound in my mouth to go and retrieve any lost or left behind food.

when he finished, he told me to apply some topical antibiotic to the swollen gum, keep the area clean, and don’t brush too hard. i made mental notes of his instructions. he wanted to take an x-ray of the tooth just to make sure he wasn’t missing anything. ok, i thought. it’s not like i don’t have anything else to do. i’ve been here over an hour, but you want to keep me longer? alrighty then, my pleasure.

i had to pee. i’d been holding it ever since i arrived and now i couldn’t hold it any longer. i pushed the tray out of the way and started to get up when the assistant came back and said, “time for your x-ray.” defeated, i sat back in my chair and willed my bladder to hold on a few more minutes. then the assistant came at me with a 3″ x 3″ piece of square film and proceeded to cram it into my smaller than 3″ x 3″ round mouth. my gag reflexes kicked in and suddenly i thought, “they won’t have to worry about me peeing in this chair because i will be hurling all over their equipment!” she coached me, “breathe through your nose, breathe through your nose.” and i was like “how do i do that?” panic set in again and i thought for sure i was going to pass out. why hadn’t i taken the time to get that zanax! help me jesus! help me oprah! help me tom cruise!

then she instructed, “hold still, almost done.” and then she snapped the picture and i spit the film out and she caught it before it flew up and hit the overhead light.

please let me go. just pull the tooth and let me go! i’ve got plenty more teeth, but this–i can’t take this any longer! AND I’VE GOT TO PEE!

when she left the room again, i decided it was time to go. i didn’t need to know what the x-ray showed, i can’t read x-rays. it would just look like albino cockroaches standing in a line to me. i made my way to the bathroom and locked the door. i assumed the position and aaahhhhh. pee, glorious pee.

after i was finished, i came out of the bathroom to find the dentist and the assistant waiting for me. he let me know my tooth would be fine and for me to enjoy the rest of my summer. whatever dude, i’m outta here.

i paid the bill, put on my sunglasses and headed out the door. i’d survived going to the dentist. i mean granted, i couldn’t smile because half my face was paralyzed, but it was going to be a GREAT day. everyone i passed on the way to my car smiled at me and i tried my best to not look like i’d suffered a stroke. once inside my car, i started the engine, cranked up the radio–kiss’s lick it up was playing–and i began singing at the top of my lungs. still, not easy to do when only half your mouth works, but whatever. then i reached across to put on my seat belt and that’s when i noticed i was still wearing the paper bib.